This 'n That: Some Recent Trade Acquisitions 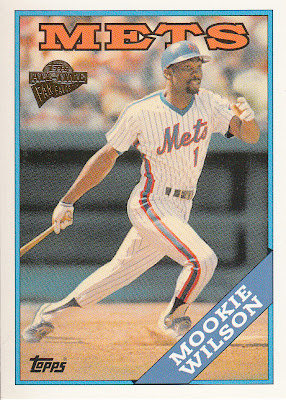 I sometimes reference time travel as a means to convey my regret in not actively collecting a certain set or a particular product.  Lemme give you a for-instance...

I wish I could go back in time to 2004 or 2005 and buy oodles of Topps Fan Favorites packs.  I love this stuff!  Of course, in the aforementioned years I was barely collecting, and that which I did buy consisted mainly of Topps Opening Day or football cards.  Thus, my only access to the Fan Favorites cards are at hobby shows or via trade.

The latter avenue is how the above Mookie Wilson came into my collection.  A nice, neat little PWE exchange between myself and Pat of the Hot Corner.  This one is from the '04 edition of Fan Favorites.  For whatever reason, Topps usually has a tough time nailing the '88 set's font colors and sizes.  That is especially true of the last two Archives releases which featured SPs in the '88 design.  However, '04 TFF made a throwback that is pretty darn close to the original... 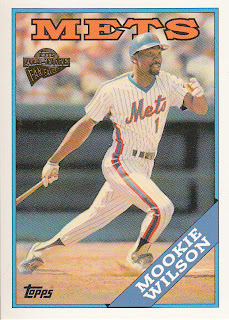 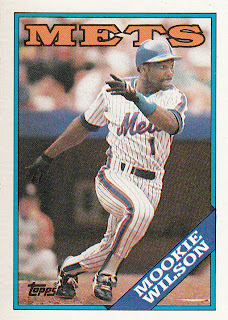 Pretty good!  The photo is very reminiscent, too.  To me, it appears Mookie on the left may have fouled off a pitch or lofted one into the outfield, while Mookie on the right looks more hellbent on beating out a grounder.

I have very few of the 2004 Fan Favorites set, but I'm making pretty solid work of the 2005 edition.  And I crept just a little bit closer thanks to a potpourri trade package Greg the Great and Powerful Night Owl sent me recently. 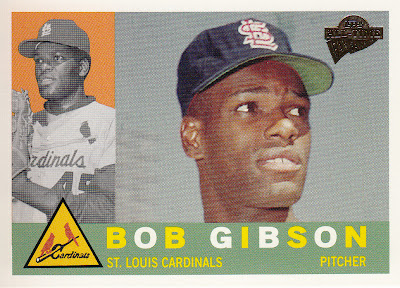 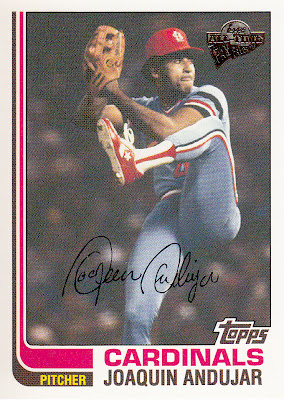 A pair of big-time St. Louis pitchers.  How appropriate to get a nighttime card (Andujar) from the Moonlit Knight himself!

The Owl also hooked me up with a hefty stack of 2011 Topps Heritage base cards... 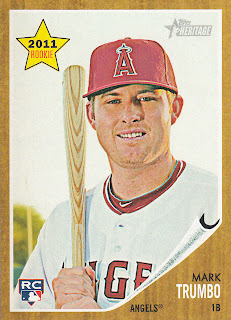 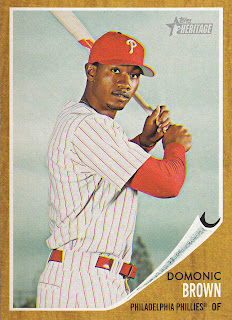 We can probably expect to see these two lads taking part in next month's home run derby at Citi Field.  Trumbo put on quite a fireworks display in last year's event in Kansas City, while Brown is taking the N.L. by storm this year with his crazy power surge.  N.L. derby captain David Wright would be crazy not to tab Dom for the Senior Circuit's crew.

Thanks to Greg's generous contribution, I'm just 13 cards shy of putting the 425-card base set to sleep!

The final component to N.O.'s trade package was of the parallel variety... 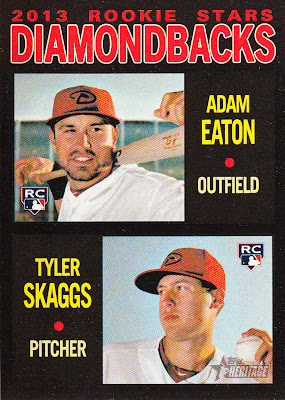 While this 2013 Heritage Target variant isn't exactly a "night" card, the black border lends itself to the twilight vibe.  And that's close enough for me!  This is the 19th different black parallel I've acquired towards the set, thus beginning a new nine-pocket page for my '13 Heritage binder-to-be.  So I'll surely be chasing at least eight more during the course of the summer to complete that third page.

Good stuff, Pat and Greg.  Thanks for the neat cards!