Time Flies: One Year in the Books 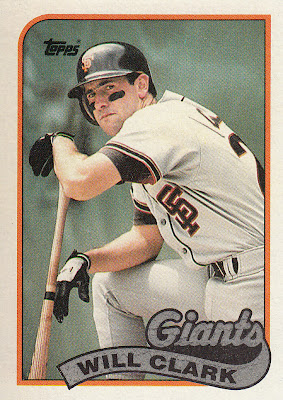 One year ago today, I began my passage into the world of blogging, introducing myself to anybody who would pay attention by posting a single Will Clark card -- 1988 Topps, No. 350.  Wellp, 252 posts later, I'm still at it. That, despite my most sincere doubts from the onset.  But, I'm happy to report, that I'm still very much enjoying this extension of my hobby, as well as the community of sports card bloggers on the whole.

To mark the occasion of my blog's first anniversary, I felt it was only fitting to post yet another card of The Thrill. This time, perhaps my favorite among all his Topps base cards.  It's been well-stated that I'm an '89 Topps fanatic, and this is one of the true gems of the 792-card set.  I love the silver and black combo used for the team name and ribbon, and how sharp it looks in symphony with the orange accent border.  As for the photo choice, it's classic Clark.  Caught in moment of pensive intensity, his game face appropriately marked with eye black. It's unclear whether he's waiting on deck or in the hole, or perhaps even for a crack at the batting cage.  Not that it matters; Clark approached all facets of the game with the same amount of reverence.  And that's why we, his fans, loved him.

So a year of blogging in the books.  Hard to believe 12 months has passed by so quickly.  It's been a lot of fun blogging, and I've met a lot of cool people via trading.

My longest-enduring trade partner is Marcus, whose All the Way to the Backstop blog really inspired me to get off my duff and give blogging a try.  The way he collects and the fashion in which he writes, I saw a lot of myself in Marcus' style.  And I've been lucky enough to maintain a great trading regiment with him over the course of the past year.  Well, actually, I hesitate to call it trading.  Basically, we just send cards back and forth when the spirit -- and circumstance -- moves us. 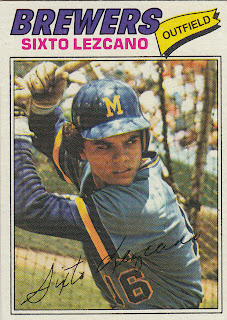 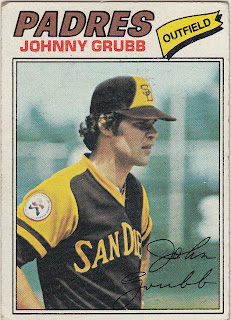 These '77 Topps cards are a prime example.  These came from Marucs via a PWE in today's mail.  I recently mentioned that I was in the process of building the '77 set, and Mr. Backstop came through with a few additions. 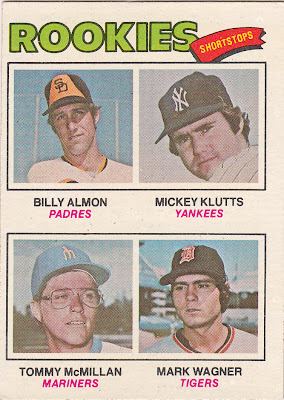 As most of you know, Marcus is a Padre fan/collector, so it's no coincidence that two of these three cards have a San Diego tie-in.  In this case, his surplus was my gain!  By the way, it's bad enough Mickey Klutts carries around such a last name, but that airbrushed hat is the absolute worst!  In fact, all of these caps look painted. 'Sup with that?

Accompanying these three vintage pieces was some new blood. 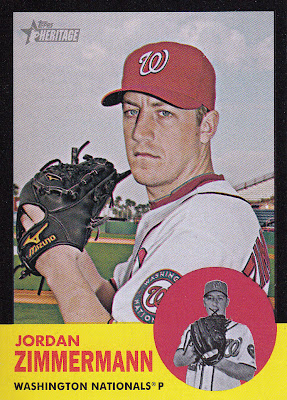 If I had to pick a new generation set that might approach my love of '89 Topps, the 2012 Heritage set and it's variation issues might fit that bill.  This is actually a Target-exclusive black-bordered parallel that I already own. BUT, it happens to be a player that I am seriously considering adding to my player collection stable.  Jordan Zimmermann has been an efficiently dominant pitcher this year.  Not flashy in form or gaudy with his strikeout numbers, Jordan just racks up innings and wins, all to the tune of a minuscule ERA.  Anyhow, one Zimmermann for my Heritage binder, and now one for my soon-to-be player collection.

While Marcus is my oldest trading buddy, I recently got an envelope of cards from my newest.  Not too long ago, I contacted Tom O. in Illinois, who writes the very pleasing Waiting 'til Next Year blog, about a Tom Seaver card he posted for trade.  A few emails and some standard postage later, this arrived: 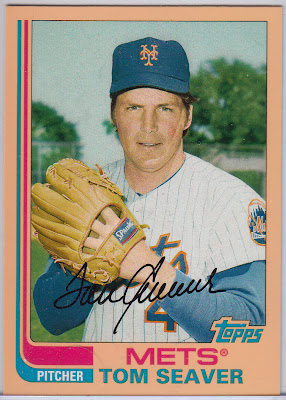 Yep, it's those darn orange "day glow" cards from 2013 Archives again!  The ones that refuse to be properly scanned.  Scanning quandaries aside, I think this is a pretty cool and unique addition to my Tom Terrific collection.

Tom also added this to the package: 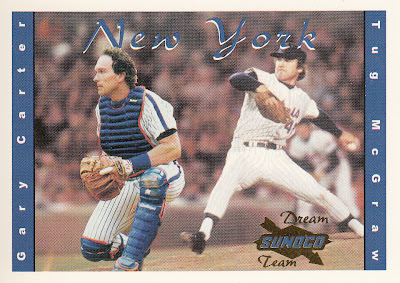 Definitely a nice little surprise!  I already have one of these in my Kid Carter collection, but I'm extremely pleased to have another to put towards my Mets/McGraw collection.

Tom's blog is definitely one of my new favorites.  And, I only use the word "new" because I came across it just within the past few weeks.  I have no idea how I had missed it prior to that, but I'm sure glad to have it on my blog list presently.

Thanks for the trade, Tom.  I'll look forward others in the future!

Two envelopes; one from an old pal and one from a new friend.  Not a bad way to celebrate one's blogging anniversary, if I might say so...