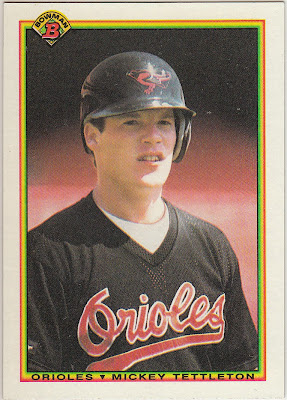 I'm always eager to make trades with a well-respected blogger who I haven't had the pleasure of dealing with before.  And so it was, a week or two ago, Tom at The Angels, in Order blog contacted me out of the blue to offer up some cards towards my player collections.  Namely, John Olerud, Sammy Sosa, and man you see pictured above, Mickey Tettleton.

So let's have a look at my four favorite cards from each player lot that Tom sent.

Call me crazy, but I really dig 1990 Bowman.  Well, at least my inner 10 year old digs it.  It's lots of boring Spring Training photos, yes I understand, but its sentimental value far outweighs even the putrid inner border. [Ed. Note: What color is that anyways?]  And that, dear friends, is why I've chose to use Mickey's 1990 Bowman as the headliner of this post.


If I wasn't such a tool for crappy 1990 junk wax, I'd most definitely choose that '92 Pinnacle as the pick of the litter.  What a sharp card!  The photo works great with the high-tech Pinnacle design elements.

There were some outstanding Oleruds in the mix, as well.

I usually lean towards a great landscape shot, so the '94 Pinnacle "AL Batting Champion" card is an instant favorite.  But, Collector's Choice might get the ultimate nod for the Olerud portion of the package.  You seldom see cards in which the batter is getting congrats from the third base coach after popping one out of the park. And it's pretty neat for this particular player gets the distinction, as Olerud was a natural line drive hitter and not necessarily known for his pop.

Finally, Slammin' Sammy gets his time...

I love the trademark menacing batting stance that is showcased on the '99 UD Victory base card, but I'm more drawn to the subset card from the same set.  I've seen--and I own--Sammy's cards from his Texas days, but they're mostly portrait shots from what I can recall.  It's pretty neat to see him in action wearing the Rangers uni.

A truly enjoyable lot of cards, Tom.  Thanks a bunch for thinking of me and dropping a line.  A platoon of Halos cards will be heading your way in the near future.