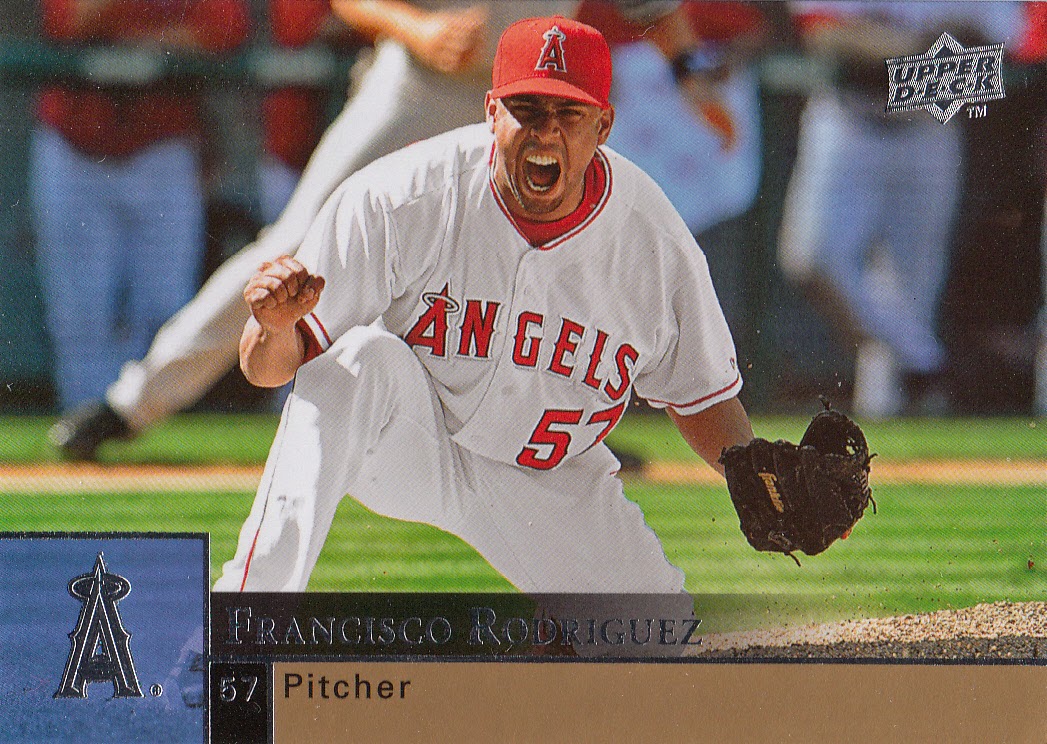 An unexpected, unannounced PWE (is there any better variety?) graced my mailbox last week bearing a handsome collection of horizontal cards for my aptly named Horizontal Heroes frankenset.  Besides all the cards being of the landscape orientation, the other common bond they shared was name across the chest:  It was nothin' but Angels!

Sure enough, Mr. Yeo (One Man's Junk Wax) was good enough to cull a few of his spare Halos and float them to Delaware.  As he stated in his note, he wanted to make sure his favorite club was properly represented in the 660-card Horizontal Heroes project I'm working on.  Hey, I'm not too proud to take bribes or charity in such an instance.  I've got a lot of vacancies still to fill up!

And, Jeff found quite a few gems that will surely find their way into the mix.  The Frankie Rodriguez celebration shot from 2009 Upper Deck is a sure-thing.  I don't have too many fond memories of K-Rod from his time in Queens, but I can appreciate what he did pre-Mets as well as post-Mets.  Honestly, I can only blame his failings in the Big Apple on the persistent black cloud that hovers over New York's National League entry from year to doggone year. 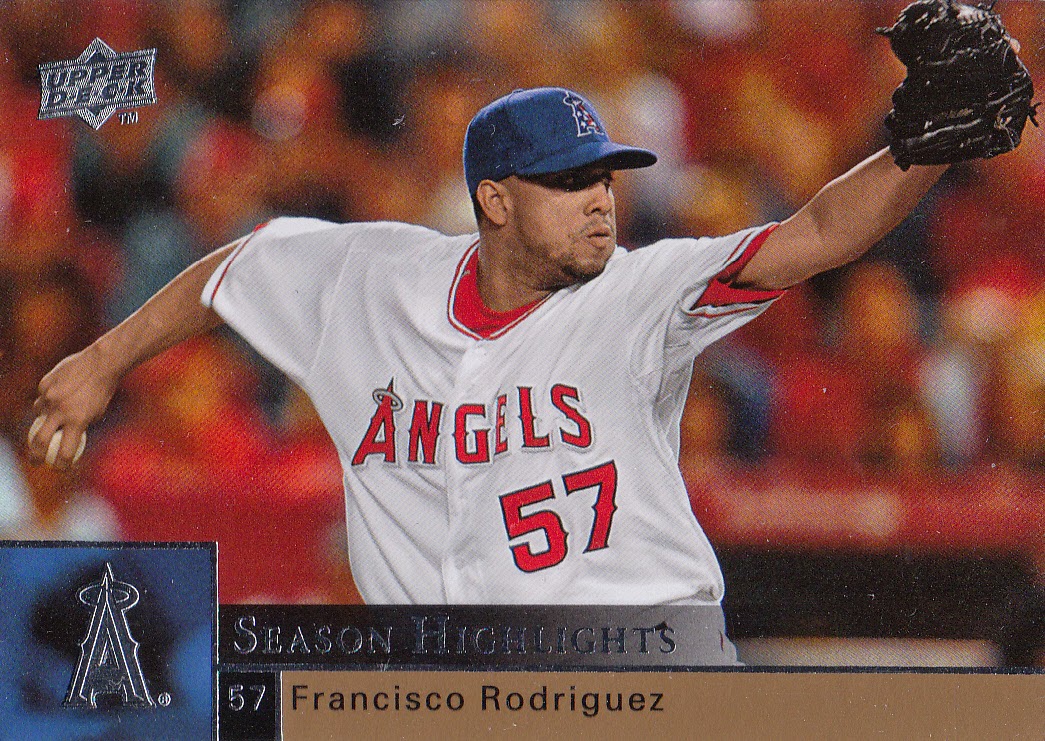 Can we fit two K-Rod's from the same set into the HH project?  You bet!  Especially when the second card features one of those ultra-cool patriotic Stars 'n Stripes hats that the teams were on national holidays. 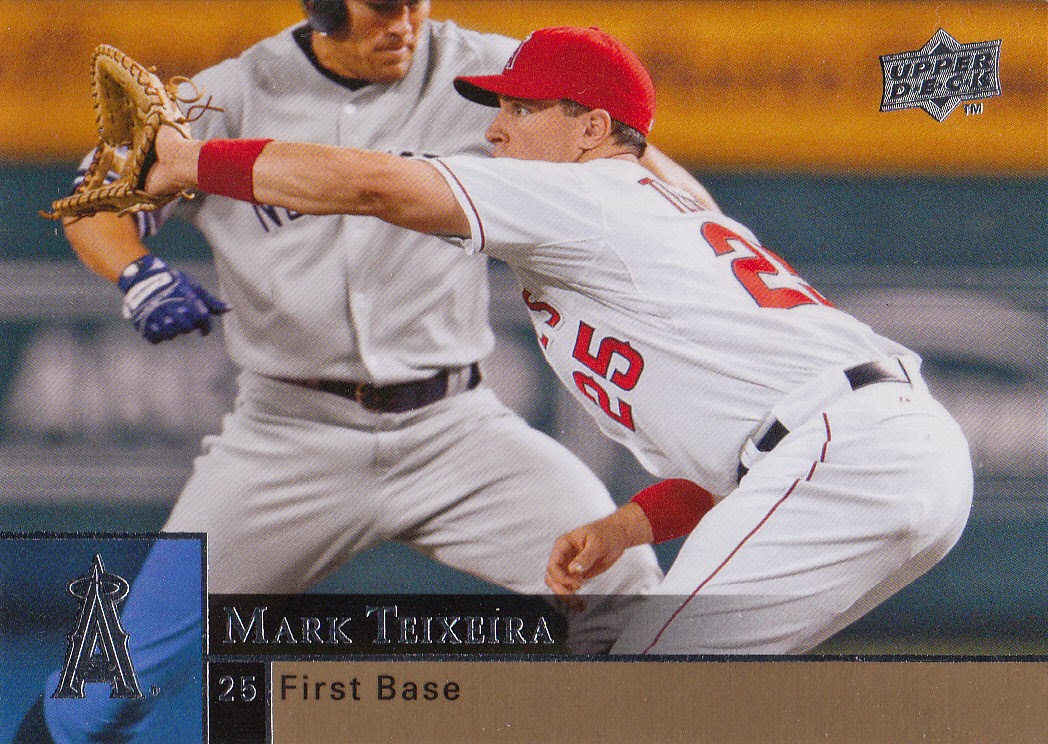 I really dug this card at first glance and figured it was a shoe-in for a slot, but I've got a pretty good one already occupying the same card number.  For the time being, Mr. Teixeira will have to remain patient in the waiting room while this whole crazy thing gets hashed out.

Ya know, one of these days I'll actually get around to sharing my progress.  I promise! 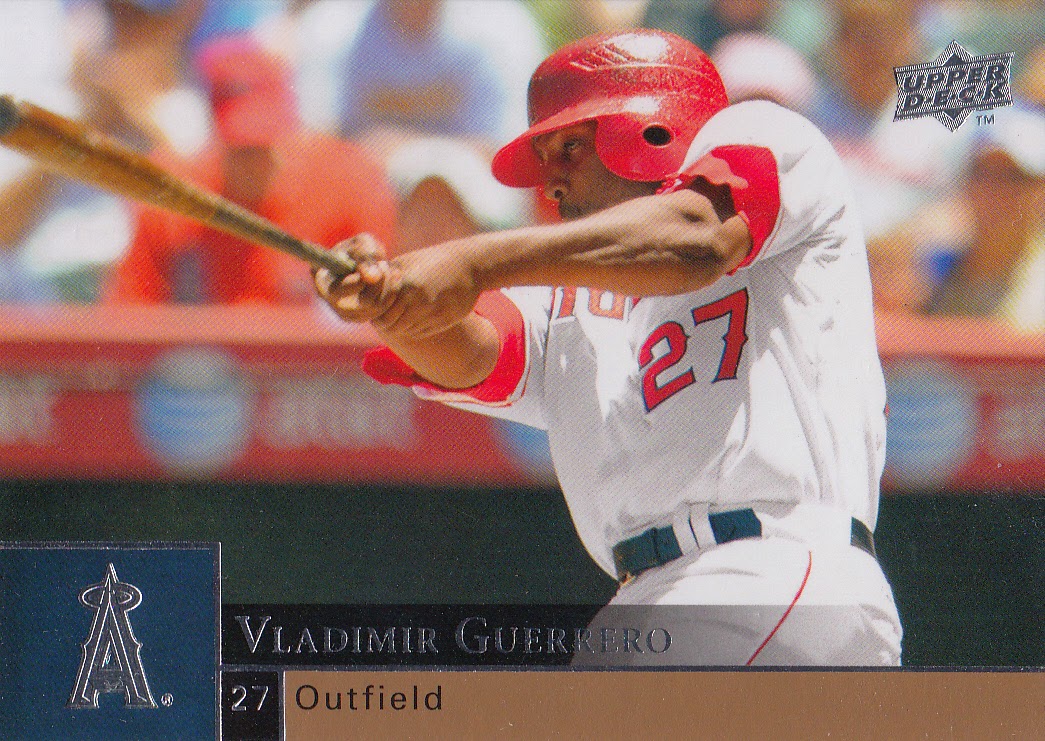 One more from 2009 Upper Deck.  Vlad's card number is beyond the 660 boundary, but I don't really need a good excuse to post a scan of a Vladimir Guerrero card, do I?  After all, the man can hit ANYTHING! 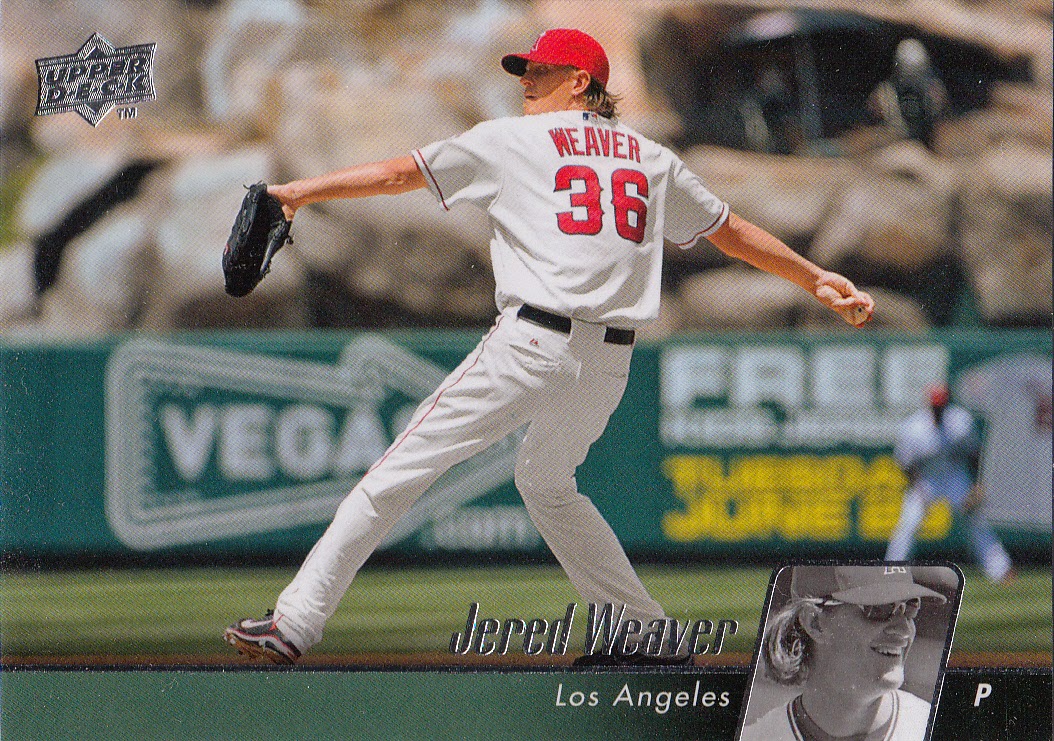 Much the same way Teix's card is being blocked from automatic inclusion, this dandy Jered Weaver card from 2010 UD also has a stiff battle for its respective spot (No. 267 in case you're interested).  It may or may not be a card of a former Mets utility player who is now the agent for the current Mets captain. 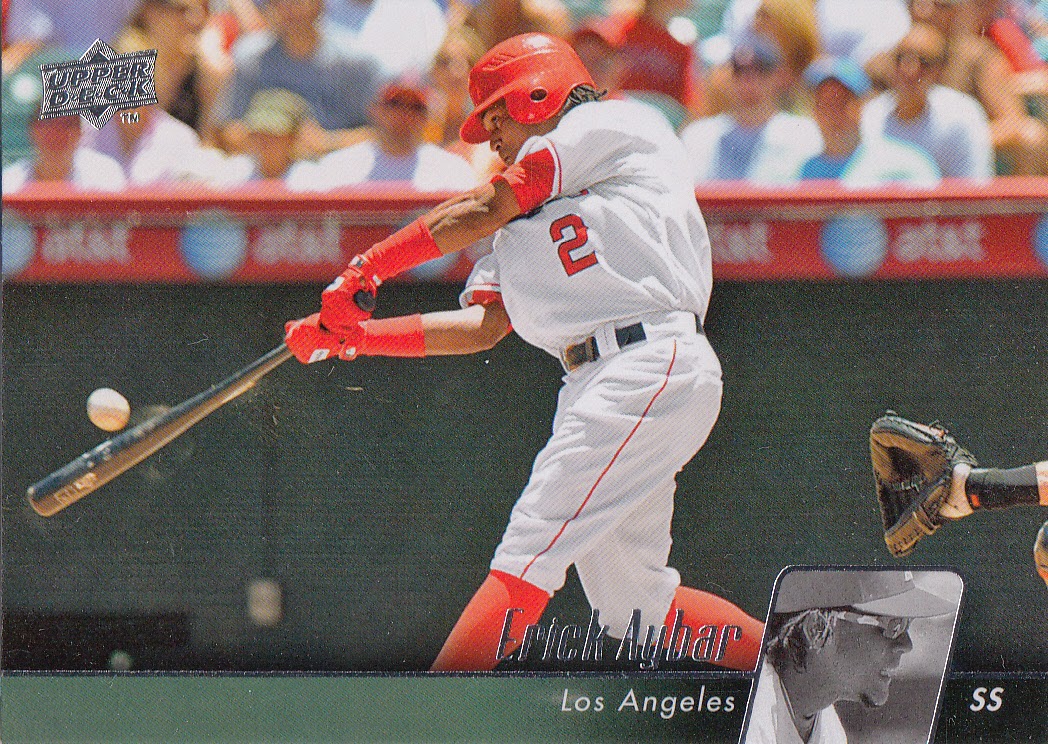 Could this amazing bat-on-ball action shot of Erick Aybar be a slam dunk for the Horizontal Heroes list? 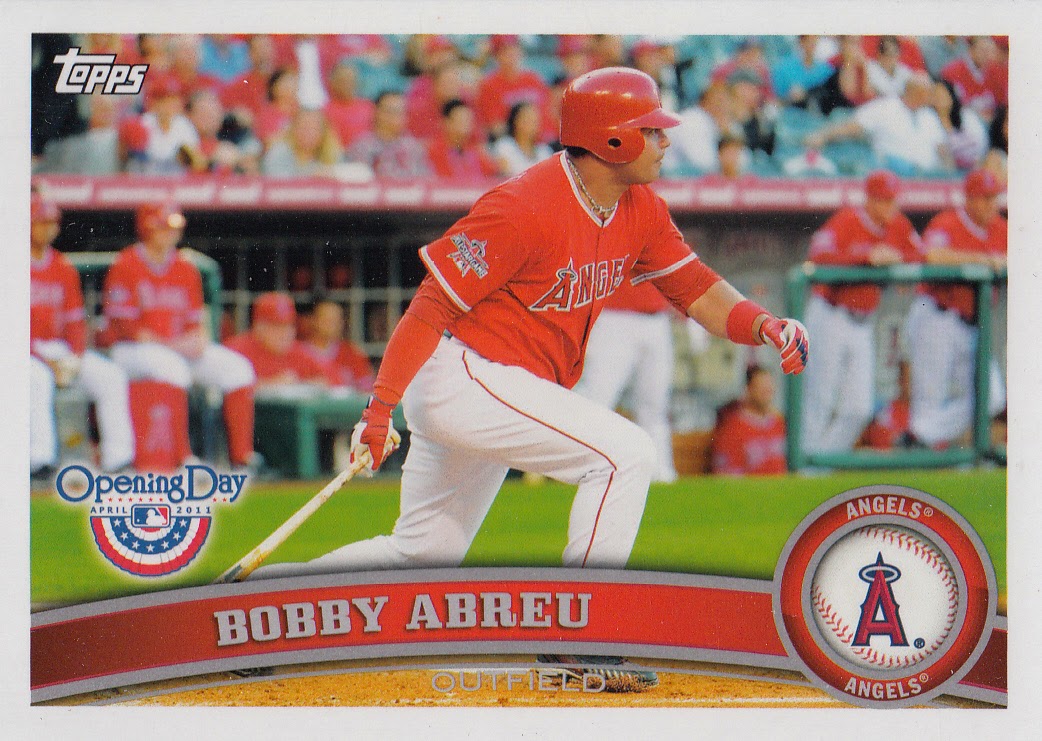 Surely, I can find a spot for a card of the ageless Bobby Abreu... 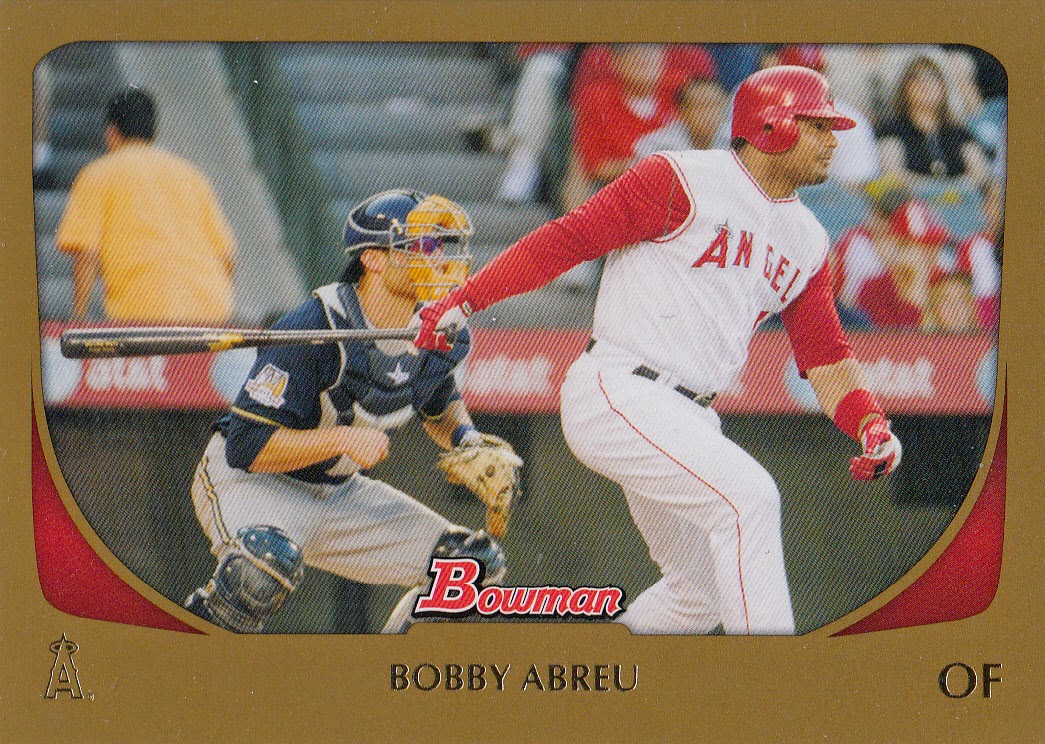 Or possibly two?  After all, the guy is practically the only current Mets player who has shown the ability to hit with runners on base.  Hell, he batted cleanup against St. Louis last night.  Nothing against Bobby--who has had a terrific major league career--but that is completely and utterly pathetic.  The guy was signed to be a pinch hitter, not the everyday right fielder and heart-of-the-order guy.

Ugh.  Let me not go off on a tangent here.  One or both of these Abreus will make the cut, I'm pretty sure. 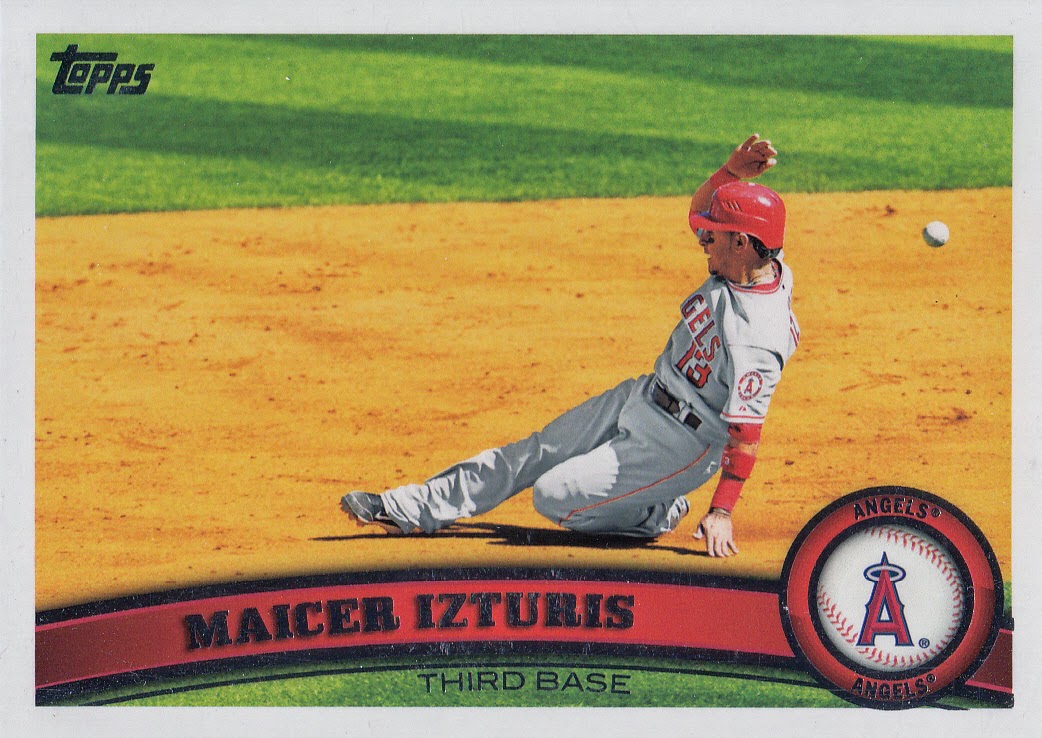 Awesome photo here.  We see the ball, yes?  But, the base isn't even in the frame, so I have a feeling Maicer is in some trouble.  2011 Topps gave us plenty of kick-ass photography like this, did they not?  But, will this one have enough oomph to crash the HH checklist??

Okay, I've saved the best for last.  No more teasing: This next card is 100% going to be in the This Way to the Clubhouse "Horizontal Heroes" frankenset (coming to a blog near you).  I guarantee it! 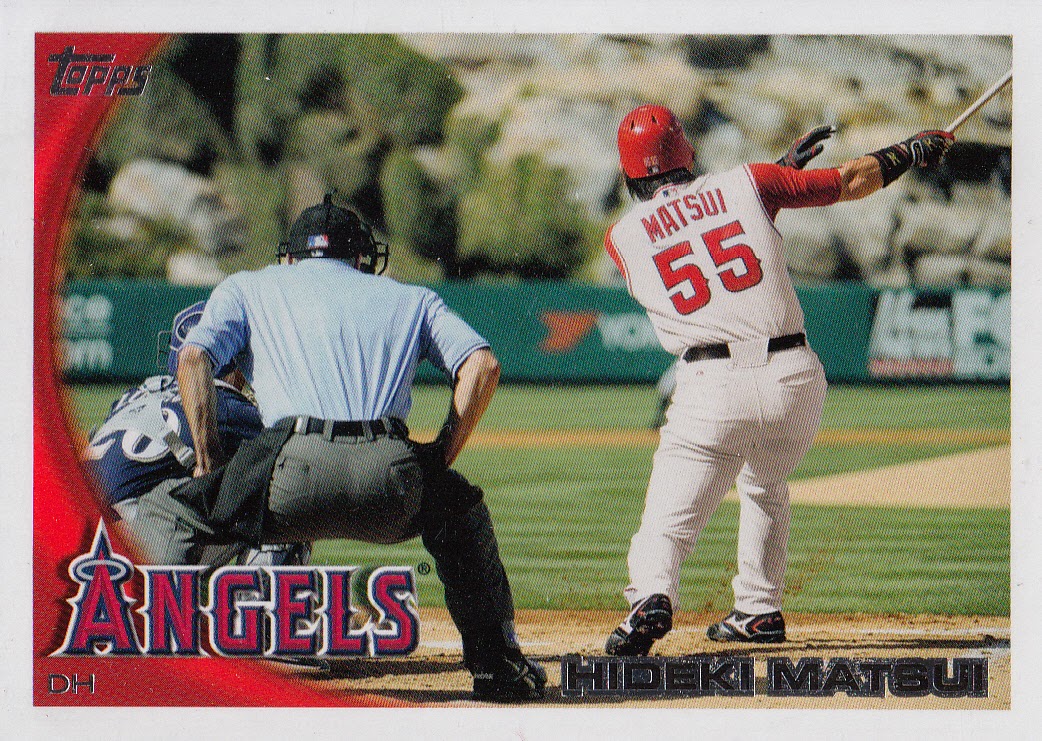 First of all, it's Hideki Matsui, which is pretty awesome.  The 2009 World Series hero.  Slayer of the Philadelphia Phillies and their greasy-fingered fans.  A man with a nickname after a fictitious, radiation-born Japanese dinosaur.  Need we go on?

Secondly, one of the best photos to ever wind up on a baseball card, hands down.  You've got batter, catcher and ump in the frame.  The unique rocky, tree-dotted terrain beyond the center field wall at the Big A.  And you've even got some unpaid advertising in the background, courtesy of the outfield wall.  It's just...perfect.

A big-time hat tip to Mr. Yeo for keeping me in mind for these wonderful additions.  Your horizontal Halos are welcome here anytime!  And, I can assure you that the boys from Anaheim will be more than adequately represented in the HH checklist.