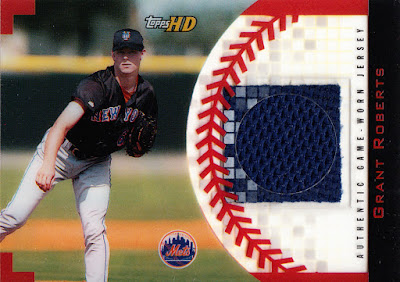 So, my buddy Shane from Shoebox Legends has been steadily sending me good vibrations from Rhode Island for some time now.  You know this if you've ever seen my blog or his.  We've got this pretty solid Mets-Red Sox exchange going on.

But, Shane ventured outside the box with the most recent delivery to Delaware.  Rather than the standard PWE I've become accustomed to, it was a padded mailer!

There were a couple of reasons for the deviation.  Number one, there were a few patch cards in varying thickness from various brands.  For instance, the really cool 2001 Topps HD jersey card of Grant Roberts you see up top. 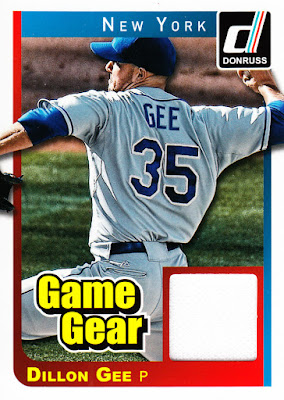 A plain white swatch of jersey on this 2014 Panini/Donruss "Game Gear" card.  Yes the patch isn't exactly exciting, but the overall design of the card really saves the whole production. 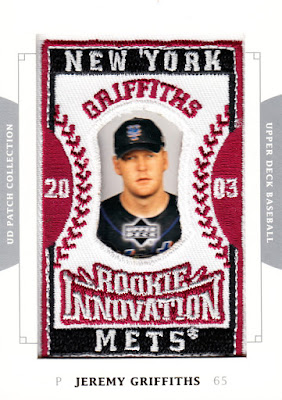 God only knows what the thinking was behind these "Rookie Innovation" cards from '03 UD Patch Collection. This thing is as thick as a stack of credit cards.  It is unique, I'll give it that. 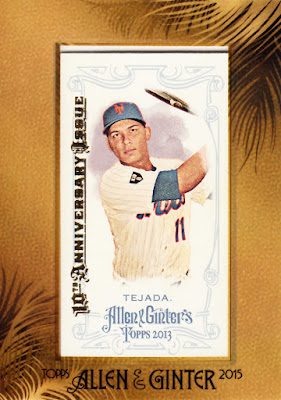 A framed buyback mini from this year's Ginter.  I like the idea of the framed mini.  It lessens the mayhem that results from trying to store or display a card that is way smaller than a standard baseball card.  Plus, the frames are always so interesting. 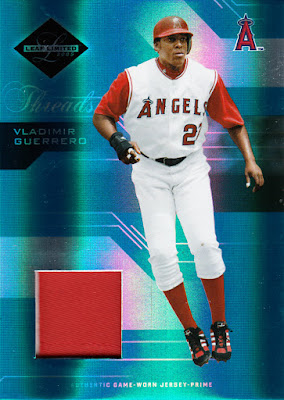 Not a Met, no, but it's a Vlad for my collection!  A beautiful card, numbered to 100.  Very shiny with a very sharp red jersey swatch.  I like this one a lot!

Aside from the jersey/patch cards, there was some of the usual--and terrific--fare that is standard for a shipment from Shane. 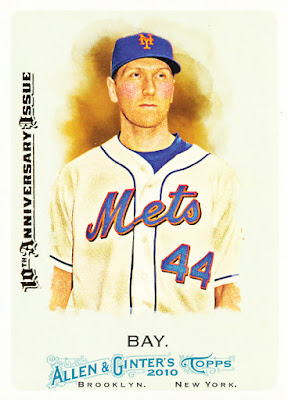 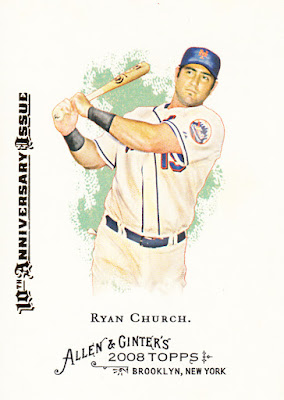 A couple of standard-sized buybacks from 2015 Ginter.  Topps really let the A&G brand run wild with all the 10th anniversary chotchkies.  Whether it's buybacks or limited-run 10th Anniversary cards or autos or minis or framed minis... You name it, they got it.  If you're a Ginter guy or gal, you have to be thrilled with this year's output, I would assume. 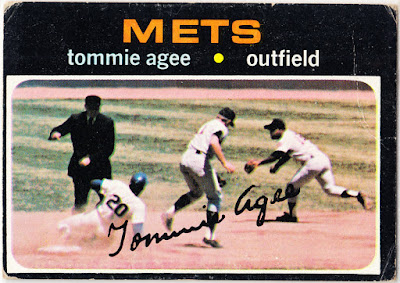 One of the best and busiest cards from 1971 Topps -- a must!  I didn't realize how much I wanted this card til I got a chance to admire it in person.  This is certainly a treasured addition to my vintage Mets collection. 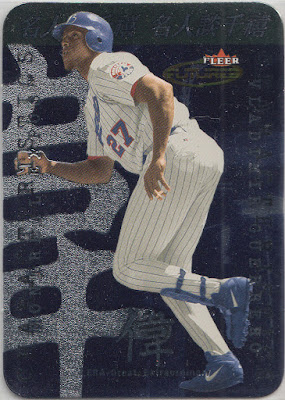 Another neat Vlad insert, this one from 2001 Fleer Futures.  My 357th unique card of the future HOFer.

Well, as the title of this post suggests, there were patches AND pucks in this latest envelope from Shane. Pucks, as in hockey cards, of course.  I've never been much of a hockey card guy, but as I've mentioned on the blog before, I'm on board with gathering up cards of my New York Rangers.

And Shane unloaded a big stack of NYR cards on me!  There were dozens included, but I picked just a handful of my favorites to highlight... 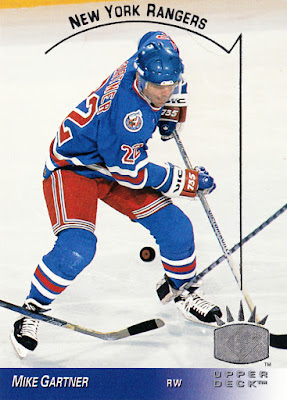 Gartner was my favorite Ranger as a kid.  I was really bummed when he was dealt at the deadline of the '93-94 season. 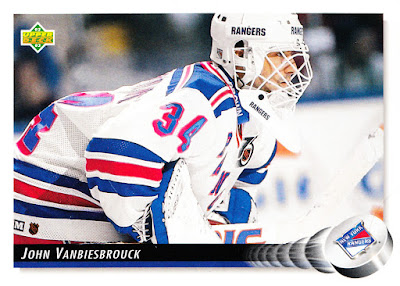 The Beezer!  He was the Blueshirts' primary goalie when I first began following hockey. 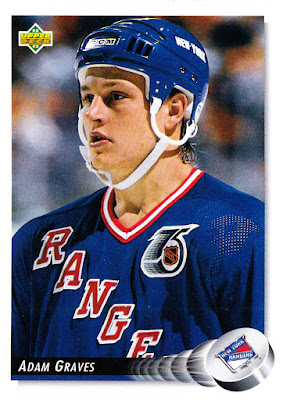 Everyone loves Messier--and rightly so--but I was an Adam Graves guy.  I still am.  Probably my favorite Rangers player of all-time.  He was the heart and soul of the team. 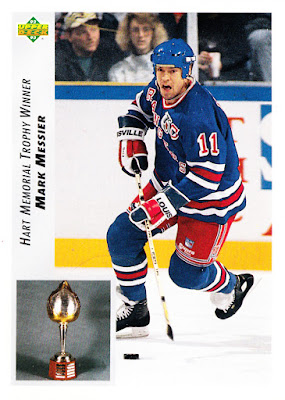 Of course, I always get goosebumps when I watch my Mark Messier DVD.  The guy is a freakin' legend, what more can you say? 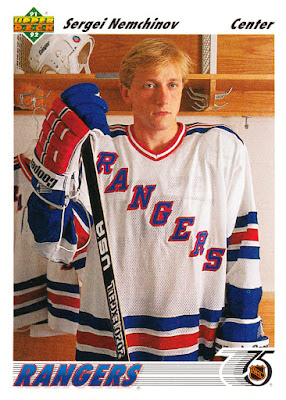 This was back when half the league wasn't from Russia or a former Soviet satellite. 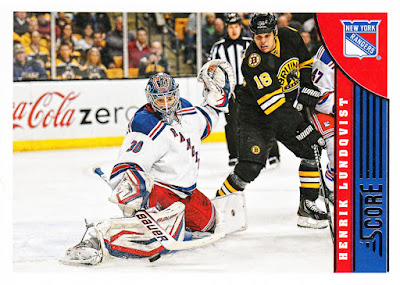 Great horizontal action shot of Henrik redirecting a shot to the corner boards. 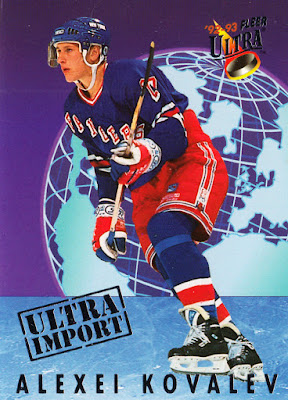 Along with Nemchinov, Karpovtsev and Zubov, Alex became the first Russian player to have his name on the Stanley Cup when the Rangers won it in 1994. 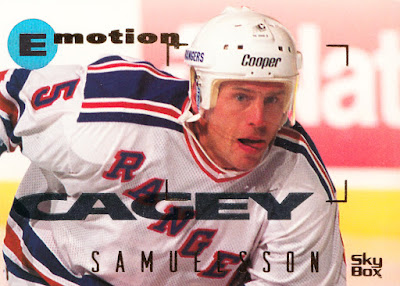 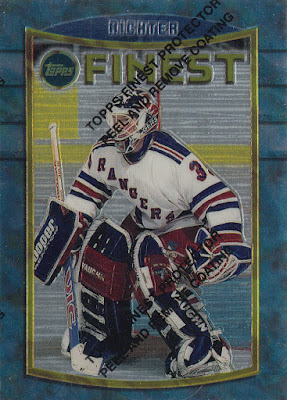 Another legendary Ranger, Mike Richter.  One of the greatest American goalies ever. 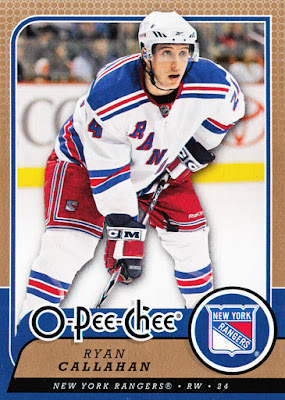 Lots of Rangers fans were heartbroken when Callahan was swapped for Martin St. Louis a couple seasons ago. He was our captain and, like Graves, a real heart and soul guy. 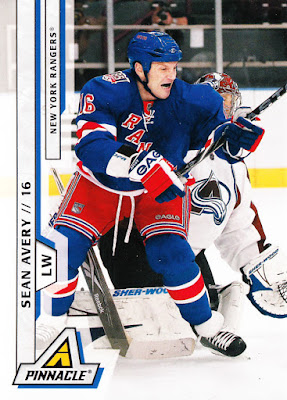 You could ask a hundred people about Sean Avery, and perhaps one or two might have something nice or positive to say about him.  Another guy, like Ulfie, who you love when he's on your side. 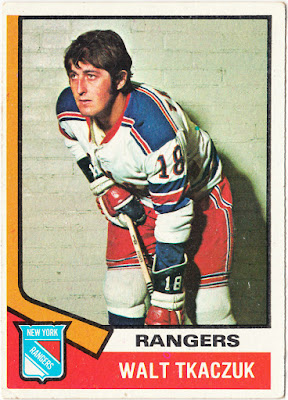 And to finish up, a vintage card of Walt Tkaczuk!  One of the great Rangers of all-time.  In fourteen seasons on Broadway, Walt collected 678 points--7th in team annals.  A great looking card!!  Totally digging the plain brick wall background.

As always, Shane, thanks for going above and beyond with the card selections.  Of course the great assortment of Mets, but certainly the hockey cards, too.  I mean, you more than doubled my NY Rangers collection in one fell swoop!