I wouldn't call it peer pressure as much as I would say that my fellow bloggers make a good case.

Thanks to some helpful responses to my last post, along with a great write up over the weekend by Nick of his recent Update hobby box experience, I decided to take the old school route and chase the 2012 Topps Update set via the traditional manner.

So I took the plunge and nabbed my first-ever hobby box!


Since it's Columbus Day and the school I work at is closed, yours truly had a chance to sneak over to his local card shop earlier today on his way back from running errands.

Not only did I get the Update box, but a couple of items in the miscellaneous discount bin got my attention. Normally, this bin contains some random NASCAR collectibles and even some older, unwanted McFarlane figures, etc.  An island of misfit sports toys, if you will.

But, today there were a pair of items I could not pass up. 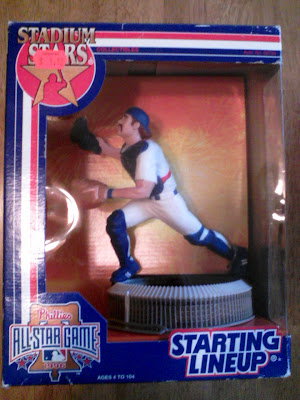 For five bucks, I got this Mike Piazza Starting Lineup figure from the 1996 All Star Game in Philadelphia.  Mike won MVP honors of that game, thus he is allowed to grow to Godzilla proportions and straddle the since-demolished Veterans Stadium.

And then, for a few bucks more, I got this: 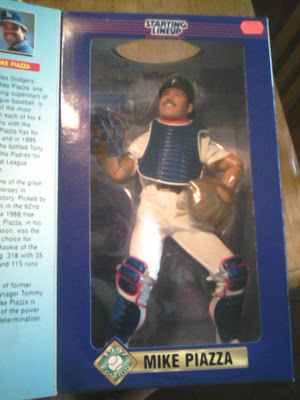 I've never seen a Starting Lineup figure this large before.  It's more or less a doll, I guess.  But, Mike Piazza is much too manly to have a doll in his likeness.  So I'm not sure what to call this.  I suppose I'll go with "Fully Poseable Figure!", which is what is listed on the front of the box.  Anyhow, it's from 1997 and they apparently made one of these for Griffey, Maddux and Ripken as well.

No clue what these things are worth (probably not much if they're in a bin in Newark, Del.), but they're both pretty cool items honoring one of my favorite all-time players.  So, that's enough for me.

Okay, I'm dying to bust open my Update box.  I'm pretty excited to see how the hobby gods will treat me.