First of all, congrats to those pesky S.F. Giants for advancing to the NL Championship Series.  My hypothetical money is behind them to knock off the St. Louis/Washington winner.  And speaking of the Nats,  that was a beautiful ballgame that they won over the Cards.  Game 5 is gonna be a dandy.

Moving onto business.  Please allow me to use this post to tie up some loose ends.  If I don't take care of these now, I'll probably never get around to it.

To kick things off, I received a few items in today's mail.  Namely the rest of the cards I needed to complete my set of '87 Minis from 2012 Topps Series 2. 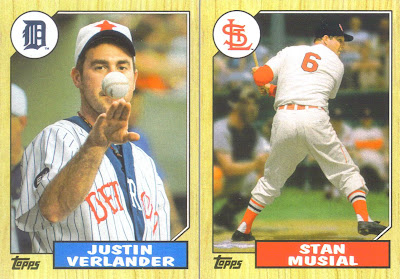 Okay, to be honest, I needed all but nine cards, so I just bid on a complete set from eBay and wound up winning it.  I couldn't help myself.  The '87 Topps set represents my entry into the world of baseball cards at the age of seven.  So, this insert set is a 'must' for my collection.  Since the Update Series continues the set with another 50 cards, I'll be chasing after those throughout the fall and into the winter, I'm sure.

Also in the mail, my third stab at a Listia auction.  The first try was a success with the 2002 Shinjo insert, while the second turn was kind of a bust with a very crinkly 1990 Topps box bottom of Doc Gooden.  This time around, I ventured into the football realm and got this Fred Jackson card for 55 credits: 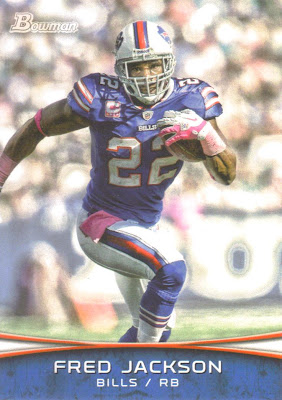 This one is from the 2012 Bowman set, which was seemingly released 10 months ago.  The Bowman cards this year are more artwork than they are photographs, which is kind of nice for a change I suppose.  Not sure why Topps chose to take Bowman football in that direction, but that's neither here nor there.  The card was in very nice condition, in case you were wondering.  So, I'm batting .667 with Listia so far.

Next up are a couple of cards I got from the 50-cent bin at my local card shop.  I got these a while ago and they've just been sitting on my desk (along with hundreds of other cards) waiting to get properly organized.  But, since I don't have a proper player collection going for either guy yet, they're kind of just hanging around in limbo.

I have a few McCutchen cards floating around, but nothing significant.  I recently decided it was probably a good idea to jump on his bandwagon, as this guy looks like he's going to be the real deal for quite some time.  For a player collection that resembles a mostly bare cupboard, the Cloth Sticker of Cutch from this year's Archives collection was a nice pick up.

And the Stanton Gold Rush card was one I did not expect to come across in the singles box.  I had only seen pictures and scans of these cards on blogs previously, so I was excited to grab this one.  In general, I don't really find these cards that exciting or attractive, but I will say that they look a lot better in person.  And with the right player, they work just fine.  Stanton, an All-Star with awe-inducing power, has grown on me over this past year.  I'll definitely be on the lookout for his cards in the coming years.

Finally, some 1989 Topps Cap'n Crunch cards that Mrs. K found online and bought for me a couple weeks ago:

I've mentioned these oddball cards on the ol' blog before, so I guess she was paying attention to that.  These things are great!  I really dig the design they used; the red and blue frame is pretty sharp.  I've now got six of the 22 cards in the set.

Well, I think this is a pretty appropriate place to call it a night.  Thanks for rummaging through the junk drawer with me.