A couple of envelopes containing cards arrived for me with today's mail.  One was from an eBay purchase, the other contained my second foray into the Listia universe.

I'll begin with the Listia envelope, which looks like it was either urine stained or just a yellowing relic from 1979. Perhaps a bit of each.  On it, written in blue ink, was "Do Not Bend."

As if that were going to matter.

The content of this envelope was a 1990 Topps wax box cut-out of Doc Gooden, stored in a penny sleeve.  And, the card itself matched the condition one would expect of something that used to be on the bottom of a 22-year-old box. 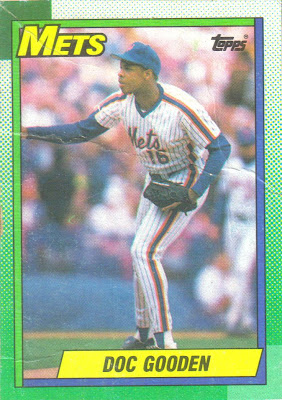 Keep in mind, I didn't spend one penny on this thing.  I "spent" 55 credits on it, to be accurate.  But, the photo/scan the seller included didn't look like this.  Nor did his description mention the rampant wrinkling.  A little accuracy in advertising, please?

But, like I said, it was free.  So, I guess I can't be upset.  Not like I expected it to be super shiny mint condition or anything.

The OCD side of me has a severe problem putting this cardboard biohazard next to anything else in my Gooden collection.  But, I'm sure I'll medicate myself and bite the bullet eventually.

From that, we move on to the eBay side of things.  I recently took an interest in the " 1965 Tall Boy" inserts in 2012 Topps Football.  Now, I'm not really into Topps flagship football this year.  In my opinion, the pock-faced nerds at Topps perpetrated an utter PhotoShop hatchet job on the rookies and free agent cards.  And it taints the product, in my opinion.

But Mark, Topps uses heavy doses of PhotoShop in the baseball set, too.  Yeah, but I think this looks much worse.  When I saw Bills rookie tackle Cordy Glenn wearing a blue "00" Bills jersey on his rookie card, that cemented it for me.  And I hate the photos from the scouting combine, too.

I just don't like it.  Climb off my back, will ya?

So my only option, then, is the secondary market.  In other words eBay.  And I found a nice five-card lot of Tall Boys there for under two bucks.

I don't know if this is a coincidence or not, but the plain white envelope from the eBay seller was actually, uh, white.  Meaning no pee-pee discoloring.  And the cards were protected with two clean toploaders.

Man, I really love these things.  I was kind shocked when I found out the complete set was in the neighborhood of 140 cards.  Yikes!  That's what I call a heavy-duty insert set.

Of the five, this is my favorite: 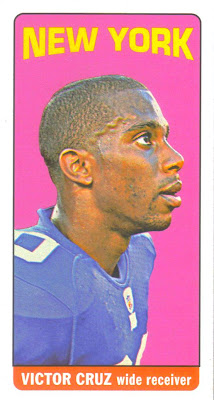 Love me some Victor Cruz.  Tough loss for Big Blue last night.  But, don't expect any sympathy from me, Giants fans.  The Patriots hung a 50-burger on my Bills yesterday.  And that's all I've got to say about that, thank you very much.

Oh, the backs of these cards are pretty great, too: 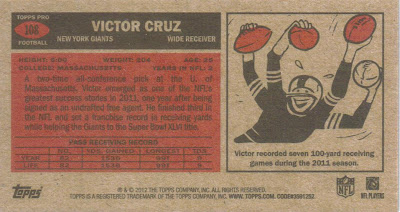 It would be an epic (and expensive) task to try and complete this set, so maybe I'll just settle on rounding up my favorite players for starters.

That's all I got for now.  Enjoy the last few days of the baseball regular season and, if you're like me, Monday Night Football.