Getting Horizontal with Jay Bell 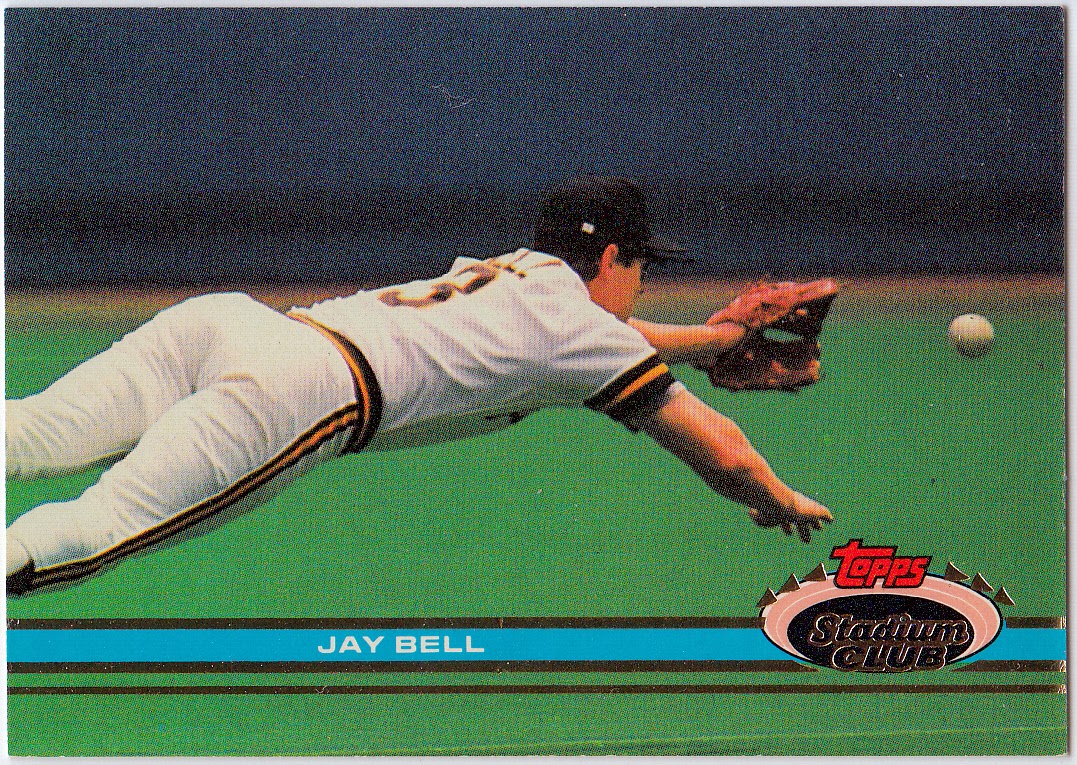 I think I'm like a lot of collectors in that I have a love/hate relationship with horizontal baseball cards.

In one sense, if a card is framed in a horizontal fashion it usually means that some sort of interesting action sequence has been captured, and no flimsy vertical-orientation card could do it justice.  And, obviously, that's a great thing for all parties involved.

On the other hand, while the majority of these horizontal portraits are easily admired in a vacuum, they tend to be jarring when presented within a set whose cards predominantly are of the vertical variety.  This is most certainly true when the cards are displayed in nine-pocket pages.  It also makes those cards kind of annoying to view.

But, when it comes down to brass tax, I'm a sucker for the horizon-friendly cards and normally show them added favor relative to their upright cousins.  I just think they lend themselves to more artistic expression (in most cases) in an aesthetically rebellious sort of way.

Well, a recent "frankenset" post on Nick's Dime Boxes blog had a few dandy horizontal cards, but it also featured a great vertical double-play card of Jay Bell.  The combination of those elements got me thinking about my own Jay Bell collection, so I took a breeze through the cards.

As I had correctly remembered, Bell has quite a few great horizontal cards.  Now, I don't claim to have a vast Jay Bell collection, but of the 40 that reside in my player collection, 10 of them were base cards of the horizontal kind.  If you're a faux math major like me, you know that equates to 25% or one quarter.  And that's pretty substantial I think.

Anyhow, I figured I'd display those 10 horizontal dandies right here, right now in chronological order.  At the top of the post, we've got Bell's 1991 Stadium Club entry.  It doesn't look like Bell is going to have a very comfortable landing on the green carpet of ol' Three Rivers Stadium.  But, it's is a good start, and a sign of good things to come in regards to Bell's cards.

And here are the rest from the Clubhouse Vault...

If I were pressed to choose one of these Bells as my favorite, I'd have to go with this one.  Even though it's not necessary for us to see Jose Lind jogging into the frame in order for this sequence to make sense, his inclusion is the stuff of Stadium Club exceptionalism.


We actually have to use our imaginations to complete this potential play.  And, ya know, I'm okay with that sometimes.  It's kind of like reading a book versus watching the movie.


No matter the year, Stadium Club was always good for more than a few of these artsy-fartsy photo session outtakes.  It's a shame baseball cards aren't so imaginative and well thought out any longer.

A cloud of dust at second base signals the conclusion of a pickoff play at the Veteran's Stadium second bast cut-out.


This is actually Bell's second card from the 1997 Score set, found in Series 2.  He also had a card in the Series 1 checklist featuring him in Pittsburgh garb.  It looks like Jay has some easy prey just entering the frame, probably thanks to a pickoff play or a busted hit and run.


This one is right up there with Bell's 1992 TSC card that we already looked at.  That's old Tiger Stadium in the background, and that makes this card even more spectacular.


The ball's already in his mitt, and Bell is set to make the tag on what appears to be a Giants baserunner.

I guess we are left to conclude that the various card companies had a tremendous amount of respect for Bell's defensive prowess coupled with his longevity in the game.  Otherwise, why would they expend so many quality horizontal cards on him?  And this is just a small sampling of Bell's catalog.  Who knows what other gems of his are out there waiting to be discovered...