We're definitely in the Christmas spirit here at the Kaz house.  Trees is up and decorated; the stockings are hung on the mantle; and all the presents are wrapped.  And tonight Christmas cookies will be baking in the oven. Your's truly has volunteered to be the official taste tester.  It's what I'm best at, after all!

And, a little piece of Christmas arrived in the mail just yesterday as I received a package from Marcus, the jolly soul behind All the Way to the Backstop.

Yes, yes, it was baseball cards.  But, the assortment of cards had a Christmas theme to it.

For instance, we've got Deck the Halls with boughs of Foli... 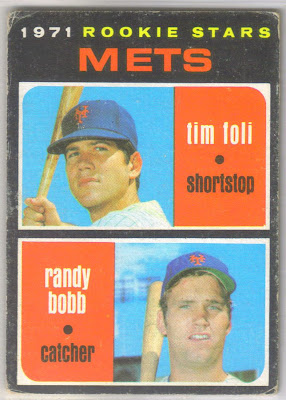 Cool fact about Randy Bobb featured on the card back: "With the Cubs in '68, Randy threw out Pete Rose trying to steal on 1st major league pitch he handled."  That's almost as cool as hitting a home run off Nolan Ryan in your first ML at-bat.  Almost.

Moving along, Sleigh Bells ring, are you listening? 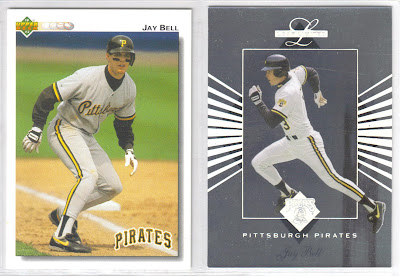 In my humble opinion, Jay Bell is one of the most under-appreciated players of his time.  He may have sacrificed more substantial numbers while playing third or fourth banana on those Pirates teams from the early '90s.  I was very happy when he won a ring with Arizona in 2001 and was nearly giddy when he latched on with the Mets in 2003.  Nothing significant came of his time in Queens (his final season), but it's still pretty cool that he donned the blue and orange.

And, in honor of the great Bing Crosby, we're Dreaming of a White Christmas... Or a lineup featuring Albert Pujols and Ryan Bruan.  Either one will do! 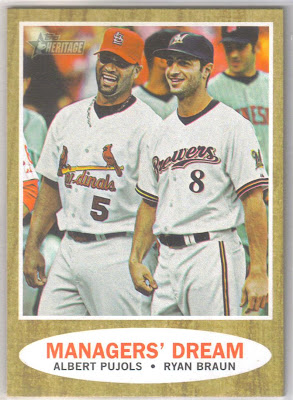 I'd say Angels fans are living the dream these days, as Josh Hamilton joins an already robust lineup feature King Albert and Mike Trout.  But, you don't win divisions on paper, right?

Okay, well, sadly that's the extent of my Christmas creativity.  But, there were still some cool cards from the package that I'd like to share.  Including a bunch of Mets representatives... 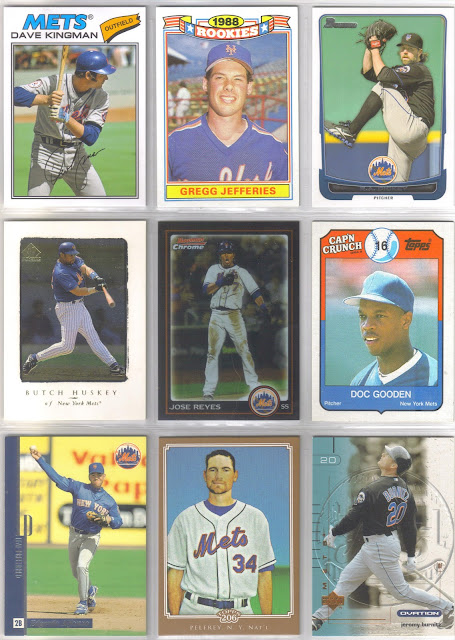 An awesome mix here.  Not to toot my own horn, but I'm kinda proud of this page here -- even if it was just made for the purposes of displaying some of the cards Marcus sent.  The Alfonzo card is pretty exciting because it comes from a set called Leaf Preferred.  Now that's a Donruss product I've not heard of previously.  And, yes, I'm naturally happy for a Cap'n Crunch card.  Marcus seems to always come through with one or two of those in every mailing.  Well played, sir! 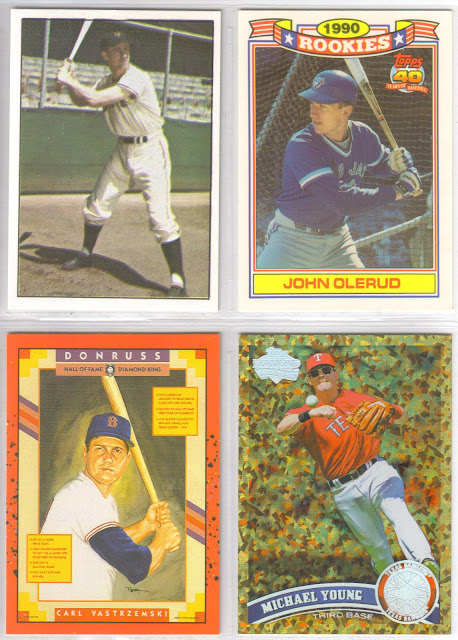 On the top left, we have Ray Katt from something called the Baseball History Series.  There doesn't seem to be anything remarkable about Katt, other than the fact that he was the starting catcher for the world champion N.Y. Giants in 1954.  His lifetime batting record is nothing to boast about, as he hit .232 with 32 homers over the course of 417 big league games.  Yet, I really like this card.  Probably because I think it's a wonderful sentiment that somebody took the time to produce a card for such an unremarkable player from baseball's golden era.  We need more of these.

I'm a sucker for the glossy "Rookies" that Topps inserted into their Jumbo Paks from the late '80s and early '90s. Plus, I'm an Olerud junkie.  So the card on the top right is a grand slam.

Moving clockwise still, this Michael Young card will go towards my 2011 Cognac pursuit.  While, the 1990 Donruss Yaz puzzle card is, well, Yaz and needs no other reason to appreciated.  Neat fact on the back: "Carl is the only player in AL history to get at least 3,000 hits and 400 home runs."  I may be wrong, but I think that is still the case.  Though I think A-Rod is closing in on 3,000 hits and will probably eclipse that mark in 2013 (assuming health).

Merry Christmas, Marcus!  Thanks for sending some cardboard Christmas joy my way...