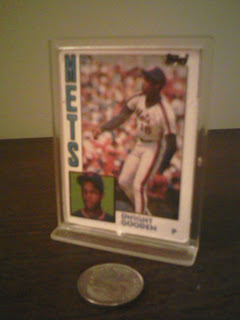 I recently received a fantastic trade package from Tim at Home of the Toddfather.  When he first emailed me, Tim mentioned he had a Topps Doubleheader...umm...card of Dwight Gooden.  I was pretty excited about that, since I've read about those things and seen pictures of them on the internet, but didn't own one.

To my surprise, these guys are pretty small.  I know the above picture is less-than-clear, but that is a dime in the foreground.  Still, it's a pretty cool collectible.  If you're unfamiliar, one side of the plastic-encased card has the player's Topps rookie, while the opposite side features the card from that year's Topps set.  In this case, it's Gooden's 1990 Topps card.

I'm not sure what you're supposed to do with these or how you're supposed to store them, but I guess I can worry about that at some point in the future.  After all, my desk has become completely overrun with stacks of cards that are yearning to be organized.  What's one more?

Anyhow, lots of neat stuff in the package Tim sent (as is always the case). 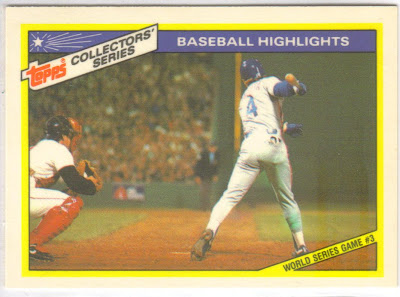 I really dig this one, which is from a 1987 Collector's Series set that Topps put out.  Here, Lenny Dykstra is pictured hacking away during Game Three of the '86 Series.  Down two games to none, the Mets got a huge jolt from "Nails" as he led off the third game with a homer en route to a 7-1 win.

One of Lenny's teammates on that '86 Mets team was Howard Johnson... 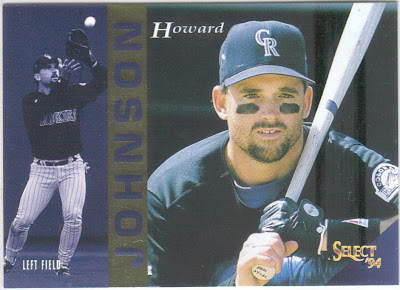 My friends and I idolized HoJo when we were growing up.  After all, he was pretty much Mr. Everything for the Mets in the early '90s, after Darryl had left town and Doc was mired in a haze of drug use.  Johnson's time with the Rockies was brief (one season) and he would play just one more season after the 1994 campaign.

After HoJo moved on from Flushing and Shea Stadium became a baseball wasteland, a trio of prospect pitchers became a blinding ray of hope for the Mets beginning with the 1995 season.  One of those pitchers was Jason Isringhausen. 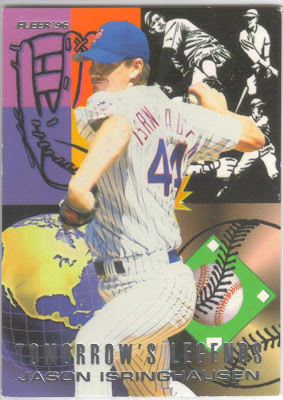 You all know the story by now.  None of those three pitchers lived up to their billing, and surely didn't change the Mets' fortunes.  Nonetheless, after his brief stint in New York, Izzy managed to carve out a nice career for himself as a closer, specifically in Oakland.  Not exactly the stuff of "Tomorrow's Legends", but he sure as hell did better than Bill Pulsipher and Paul Wilson! 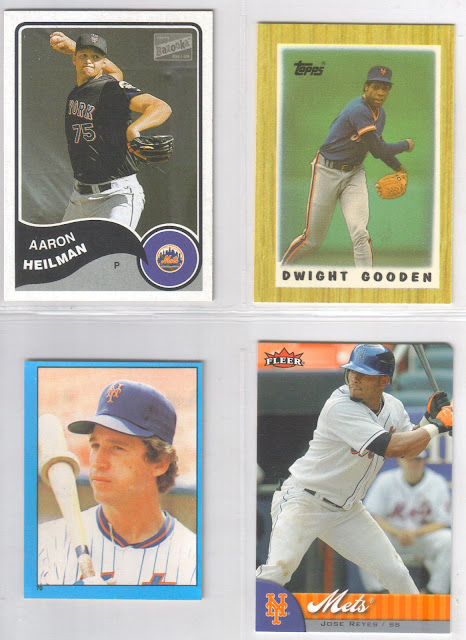 I used to have some heated discussions with my dad and grandfather regarding Aaron Heilman's worth as a productive pitcher for the Mets.  I was always staunchly in the corner of the former Notre Dame hurler.  But, I think the homer he gave up to Yadi Molina in Game Seven of the 2006 NLCS finally threw me off the ol' Heilman bandwagon for good.  Oh well.

I'm a big fan of the blue Doug Flynn sticker.  It's from the 1982 Topps sticker collection.  Does that guy look like a ballplayer from a movie or what?

Oh, in addition to the Mets goodies, there's also this sweet Albert Belle card from this year's Topps Tribute set... 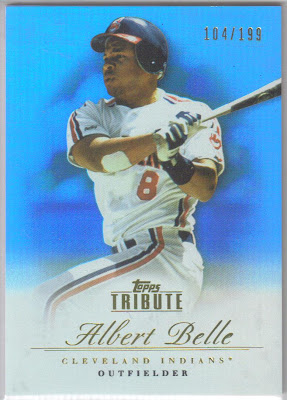 These are beautiful cards.  Numbered to 199, to boot.  And, let me say that I'm glad Topps decided to include Belle in many of their products this year.  He was a nasty S.O.B., but buy could he produce some runs.  And, I dunno, I kinda like the fact that he was ornery and crude.  Not every ballplayer should be cute and cuddly and huggable.

Tim, another perfect trade package, my friend.  This one in particular was especially fun.  And, I didn't even discuss the 1989 Topps Coin of Will Clark -- mustache and all -- or the mini-poster of Robbie Alomar from some Spanish baseball set or the Mike Piazza Upper Deck cartoon card.

Heck, do yourselves a favor and give Tim a holler and make a trade with this man!