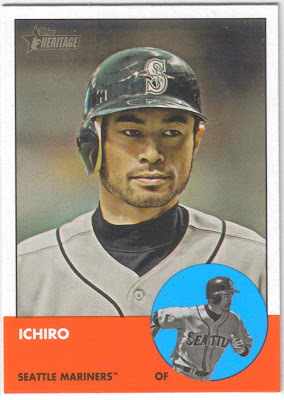 Probably like everyone else out there who collects baseball cards and has a computer (or tablet or iPhone or toaster or any number of devices that allows you to browse the internet), I frequent Check Out My Cards, or COMC for short.  Yet, I've never bought cards off the site before.  Probably because I wasn't at peace with the shipping costs.  It certainly had nothing to do with the selection and card prices -- both of which are usually awesome.

But, then came Black Friday.  And with it an email from the good folks at COMC, touting a bevy of discounts and free shipping teasers, etc.  So, since I'm obsessed, my first thought was to check out what sort of price slashing had come upon SPs from the 2012 Heritage set.  And, boy there were plenty!

Not only were the dealer prices of every 2012 short print greatly reduced, but COMC agreed to eat the shipipng cost if you bought 10 items or more.  Essentially, this was the perfect storm for me!

Normally, I have a personal policy of not buying anything for myself beyond Thanksgiving (save for life essentials like food and toothpaste and toilet paper and such).  But, I had to make an exception in this instance.  I mean who knows when I was going to find SPs this cheap again.

Thus, I made a deal with myself that I'd break my ethical code under one condition: Do not cross the $20 threshold.  Or, the price of a typical blaster box.

Well, after an hour or so of adding and removing things from my virtual shopping cart, I finally created a combination of cards that worked out to exactly 20 bucks on the button.

One of those cards is the Ichiro SP above.  I knew I had to make this one of my choices, since I have his High Numbers card in the binder already.  Wouldn't be right not to have his last card as an M.

I also managed to pick up the last lousy Met from 2012 Heritage.  And fittingly, that player no longer calls Queens his home... 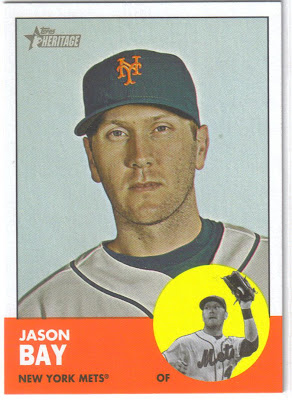 I kinda wrestled with the idea of using one of my choices on this bum.  But, I mean, I have to stay true my Mets I guess.  Plus, it was one of the cheapest cards in my cart.

Then there were a couple of Rookie Cuppers, thus polishing off that subset... 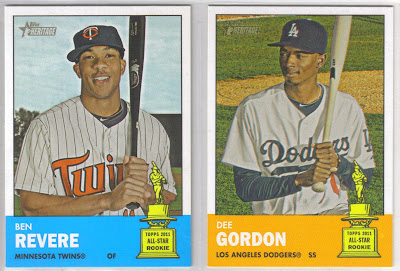 Next to Ichiro, the Dee Gordon card was the priciest.  But, that isn't really an admonishment when none of the cards eclipse the two-dollar mark.  Plus, I really like that Gordon card!

Here're a pair of young sluggers... 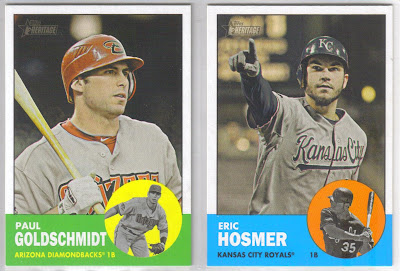 For the same reasons that I love Steve Lombardozzi's short print, I really dig this Hosmer card.  A very unique choice for the main photograph, plus the smaller inset photo is great also.  Both of these were "musts" when I was tossing cards into my cart.

A couple of accomplished  hurlers from the American League also made the cut... 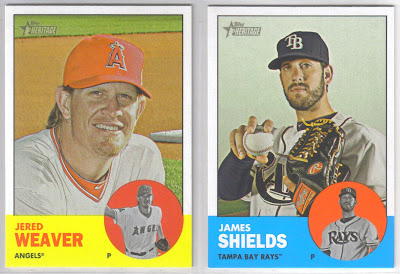 With second base artfully positioned over his left shoulder, I have to wonder if the background in the Weaver card was artificially generated.  If not, great job Topps!  Nothing to dislike about the classic pose in the Shields card, either.

And then there are these nine guys... 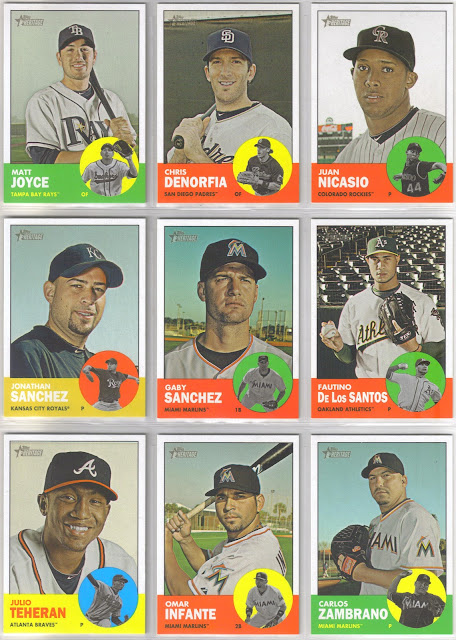 I know it's only perception, but it feels like there are about 37 Marlins cards sprinkled through the 75-card short print checklist.  And check out the terrible Photoshop job on Jonathan Sanchez's cap.  Looks like the boys at Topps just kinda mailed that one in.

Hey, not too shabby.  Seventeen SPs from the 2012 Topps set, collectively gotten for under $20.  And that whittles my short print "Wanted" list down to just 23.  Hard to believe!

What's that?  Oh, yes, that's true.  Earlier I said that I spent $20 on the dot, yet in the preceding paragraph I referenced an "under $20" purchase of Heritage cards.

Okay, so actually that's not a continuity boo-boo.  You see, I have an embarrassing error to report.  I previously reported some time ago that I had put the lid on the 2012 Archives set.  However, upon further review, your's truly fudged up his checklist.  Turns out that I was still one card shy of a full 200-card deck. 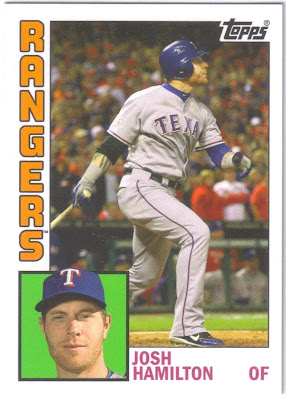 No worries, though.  For 40-cents of my recent COMC purchase, I rectified that problem!  I still feel kinda silly nonetheless.  I pretty much made a big deal about finishing the set.  But, hey, I came clean to everyone, so that has to count for something.

All in all, my first COMC experience was fully worthy of five out of five stars.  The site is a breeze to navigate; the card images are clear and vibrant; and the shipping time was under one week.  To tell the truth, I wasn't expecting to see these cards for quite some time.  I guess I was under the false impression that the packaging and shipping process was more snail-like.  I was glad to be wrong!

And since I'm being honest in this post, I'll tell you that it took every fiber of my being to resist pulling the trigger on one more group of SPs.  Up until 10 p.m. on the night of Cyber Monday I was going to submit an order for 10 more cards.  You know, 10 so I could take advantage of the free shipping.  It's such a good freakin' deal, and the cards were so cheap!  The shopping cart was loaded up and everything.

Alas, I exercised some self-restraint and turned the ol' laptop off and went to bed without committing to buy.  A very big step for such a weak, little man.

I'm hoping we won't have to wait til next Black Friday weekend for another COMC discount bonanza.