Proud to be an American


Every Election Day is a special occasion.  It doesn't matter if we're talking about electing a congressman, governor or the POTUS.  Many great, brave men and women throughout our nation's brilliant history have given their lives to establish and/or protect our rights as citizens to elect our government officials.

I know there are many out there who are disinterested, ambivalent or frustrated about politics.  I get it.  But the least we can do to honor the patriots who came before us and take five minutes out of our day to visit the polls. After all, the right to vote isn't something to take for granted.  It is the greatest power in the world granted to an individual.

Okay, I'll get off my soapbox, but I just wanted to share my feelings about this day.  And how it gives me an even greater feeling of pride in my country.

And, it also gives me a chance to display a few presidential cards.

Like the "Father of the Constitution," James Madison above.  What a nickname, right?  To be remembered for all time as an integral figure in crafting the most brilliant document in the history of civilization is pretty heady stuff. Plus his wife makes a mean ice cream!

I really dig this Kennedy card, especially since it comes from an insert set that is apparently very rare.  I don't believe Topps ever listed official odds for pulling one of these JFK Story cards.  So I'm glad to own this little piece of Heritage history.

Don't you miss the days when our President would toss out the first pitch from his front-row box seat?  Pictured here, Richard Nixon delivers the ceremonial throw on April 7, 1969 at the Washington Senators' season opener. Say what you want about Nixon -- a very controversial figure in our nation's political history -- this is a pretty great card.  The facial expressions alone make it a great slice of Americana. 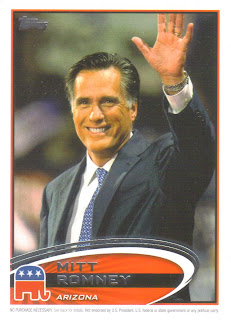 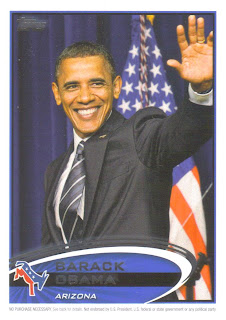 Well, it all comes down to today.  And it comes down to YOU.  Months and months of campaigning and rallying have paved the way for this very day.  No matter who you support -- whether it's either of these two men or perhaps even a third party candidate -- take this day by the reigns and make it yours.