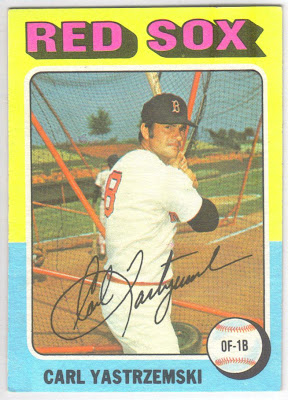 I've thought long and hard over this subject, and I can't promise that this truth will be the same tomorrow.  Or even a few hours from now.  But, I think this 1975 Carl Yastrzemski card, which I bought at a mall show many years ago, may be my favorite card.

Coming from a Mets fan since birth, it's rather odd that this would be my favorite.  Yet, the more I think it over, the more it seems perfectly normal.

I mean, the last name alone draws me to this player.  He has a long Polish last name, I have a long Polish last name.  His nickname is Yaz, my nickname is Kaz.  He wore sideburns for a long stretch of his career, I wore sideburns for most of my mid-to-late 20s.  He won the AL Triple Crown in 1967, I won the 8th grade geography bee at Applegarth Middle School.

The parallels are as startling as they are boundless.

And, of course, this is a '75 Topps card we're talking about.  This is perhaps the most unusual and awesome design from the long and beautiful history of Topps baseball cards.  The colors and the fonts and the little baseball in the bottom right corner.  It's nearly perfection, if perfection existed.

Furthermore, I realized that there a lot of players on my all-time favorites list who wore the Red Sox laundry. Pedro Martinez immediately jumps to mind, as he is my absolute favorite pitcher ever.  And, I marvel at Manny Ramirez, therefore I horde his cards at all possible opportunities.  I like Big Papi cos he's a big, jolly, fat guy who plays the game with a kid's enthusiasm and a man's strength.  I was Nomar fan the first time I saw him play in the minors when he was 'the guy with the silly name who plays for the Trenton Thunder'.  Of the Big Three shortstops from the mid-90s, he was always the guy I argued was the best at the time.

See?  I have this, like, subconscious Red Sox fetish.  I'm sure if I sat on an analyst's sofa for a while, he or she might determine that my extreme hatred for the Yankees throughout my adolescence brought upon this deep-down affinity for Boston baseball stars.

Helping me further this realization in recent times was Adam at Thoughts and Sox.  We worked out a trade a week or so back in which I helped him fill some gaps in his enormous Red Sox collection -- which was not very easy, mind you.  The guy has a gazillion Red Sox cards!  In exchange, he flipped me a stack of Pedro's and Papi's. 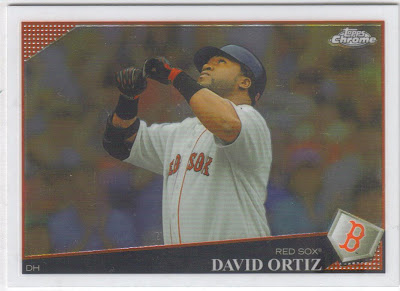 I don't have David Ortiz listed under my official 'Player Collection' tab on this blog, but he's a guy who I enjoy collecting.  Of those cards Adam sent me, I think this 2009 Chrome is by far the best.  Sometimes Topps misses the mark when they do these horizontal landscapes, but this isn't one of those instances.

Now, on the other hand, Pedro Martinez is most definitely a player I openly collect. 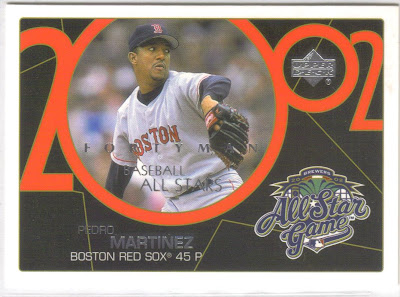 I love these All-Star Game cards from the Upper Deck Forty Man set.  The colors and composition combined with a good photo and the Milwaukee ASG logo make this card a real winner.  This is before Pedro started sporting his Smokey Robinson hairdo, by the way.

So, I guess it's not so strange that a card of a Red Sox legend might be my favorite baseball card of all time. And it's certainly nothing for this Mets fan with a long Polish last name and a raging hatred for the Yankees to be ashamed of.

By the way, Adam, thanks for a great trade.  And for also furthering my Red Sox 'thing'.

Whatever it may be.