Oh What a Night! (aka My Best Pull EVER!) 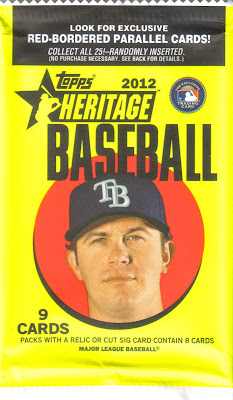 I know envy is a sin and all that jazz, but I must admit that sometimes I get a tiny bit envious when I'm checking out some of my fellow bloggers' collections or certain vintage cards or hitts.  Not that I don't appreciate my own collection and acknowledge that I have oodles of nice pieces.  But, well...what can I say?  I guess you'd call it a character flaw or whathaveyou.  But, hey, at least I can admit it, right?

Much of this stems from the tired insistence that I never pull anything good from packs or boxes.  And, for the most part that is true.  At least that's the impression I get from browsing many of the other sports card blogs out there.

Til now, that is.

This evening, I experienced a thrill that I have never unlocked previously in this hobby, and might never match.

See, it goes back to a couple weeks ago when I was at my local Target here in Delaware and noticed three random blister packs of 2012 Heritage in the card section.  You know the ones, they have three retail packs plus a bonus three-card pack of black bordered parallels?  Well, I hadn't seen one of those -- or three of those -- for quite some time.  So it was odd that they suddenly appeared.  No clue where they could have surfaced from.

I was tempted to grab them when I first saw them but I resisted the urge.  After all, I don't need that many cards for my base set, and I'd probably only get two or three SPs.  Not worth the $30 price tag for the trio, even if I would be getting a guaranteed nine black bordered cards.

Well, fast forward to this afternoon, and attrition finally took its toll.  I had those stupid things on my mind for the past two weeks.  I couldn't take it any more; I just had to have those three blister packs -- assuming they hadn't been snatched up yet.

On my drive home from work I stopped back at my Target.  Luckily, the packs remained.

As if destined for me.

The first three-pack bundle didn't yield a whole lot to holler about.  A Joey Votto "New Age Performers" insert and one card towards my dwindling base set needs.

Onto the second blister.  Pack one, nothing noteworthy.  Mind you, I wasn't really bummed because I was just enjoying the fun of ripping packs and searching for gold.

And then it happened.  As I opened pack No. 2 of the second blister, the following card jumped out and landed on my kitchen table: 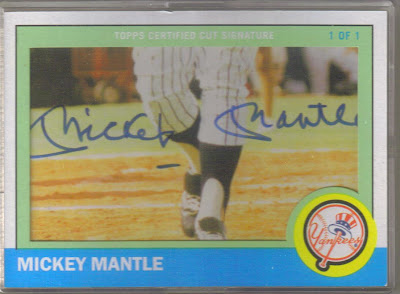 All I could utter was, "Holy [explitive]!" a few times.  Mrs. K, who was nearby preparing her famous meatloaf, broke concentration from her culinary craft to ask what was the matter.  When I finally composed myself and explained what I had unearthed, even she was in disbelief.  She even hollered at me to put it down or put it in a plastic case [Ed. Note: She's good!]. 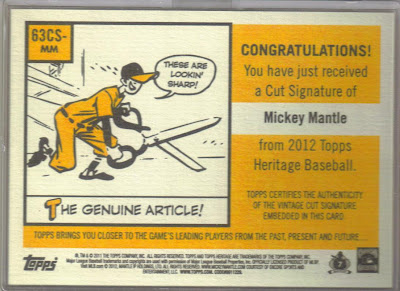 So, this is a true 1/1 autograph of the Mick from the "1963 Certified Cut Signature" collection.  Only one of these bad boys exists in the world.  There are 10 subjects in this collection, and Mantle is probably the centerpiece attraction.

I am just completely floored that this card found its way into a retail pack that wound up in a blister pack that landed at the Target in Christiana, Del.

And then flopped onto my kitchen table.

That I should have this card -- a true autograph of Mickey Mantle -- is surreal.  Too wild to be true.

Well, as giddy as I was, I still had another pack to open before I moved onto the final blister pack.

Apparently the fireworks weren't yet done.

How about an encore? 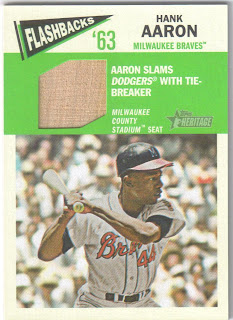 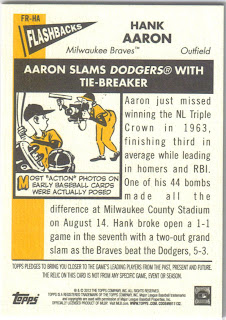 Un-freakin'-believable!  In back to back packs in the same retail blister package, I pull two hits that I could never dream of pulling from even a hobby box.  This Aaron relic from the "Flashback Stadium Relic" insert set features a piece of a seat from Milwaukee's County Stadium.  Way cool!

What a duo of cards, to say the least.  These two are easily the most important cards I've ever pulled.  And the Mantle is certainly the new apex of my collection.

Oh, as for the third blister pack, nothing so dramatic.  Though, I did pull a great chrome parallel: 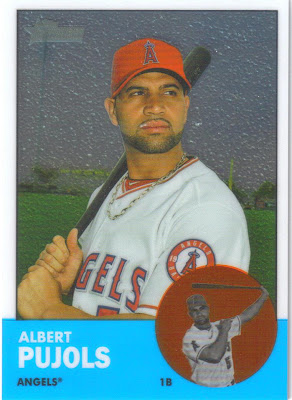 Heck, if this was the A-1 card I pulled from the nine total packs, I would've considered it a success.  So, to get this Pujols as the cherry on top was a complete thrill.

I'm still kind of riding a high from this experience.  I can't stop smiling.  I smiled throughout Mrs. K's meatloaf dinner and I'm still wearing that dopey smile as I clumsily type this post.

I'm sorry to get all girly on everyone, but this is the reason this hobby is so amazing.

For those that care about the rest of the yield, I netted three more cards towards my base checklist:

I also found a pair of red bordered Target parallels: 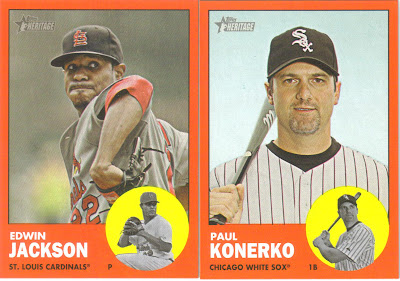 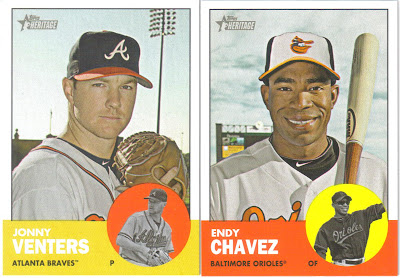 Sadly, I already have both of these short prints.  Therefore, if anyone out there is working on the SP checklist -- or if you're a Braves or O's collector -- give me a shout and we'll do business! 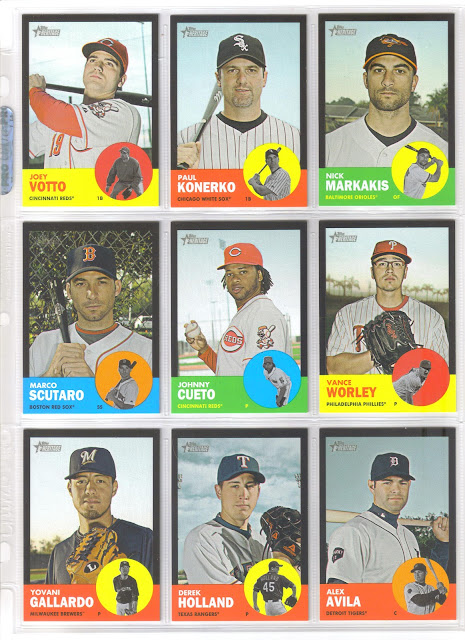 The Scutaro and Cueto cards are also up for trade, since I already have those two.

Anyhow, that's my story.  Easily the best 30 bucks I ever dropped.  I guess I'll be putting the "I never pull anything good" schtick to bed forever.

And you know, I'm okay with that.