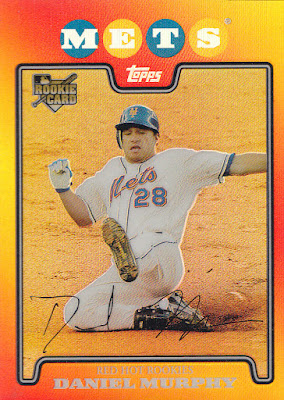 After sweeping the first-place Washington Nationals over the weekend, the Mets are the talk of New York!  Sure, the Yankees have a better record and are comfortably atop the AL East, but who cares about them?  Talk about a snooze party!

As it stands right now, the Amazins are locked in a virtual first-place tie with the Nats, who have played two less games.  For the first time since the Mets moved into Citi Field, there will actually be important games in the Borough of Queens over the final two months of the season!

In Sunday night's 5-2 victory, young right-hander Noah Syndergaard was brilliant (again!) and the Mets slugged three homers in a single inning against Jordan Zimmermann.  One of those three homers came off the bat of Daniel Murphy, who you may have noticed is the header card in today's post.  This one was a recent eBay pickup.  For a couple years, Topps did these Red Hot Rookie wrapper redemptions (say that three times fast).

I've been looking for a decently-priced copy of this 'Red Hot' Murph rookie for some time, and for .99 plus another buck in shipping, it was a done deal. 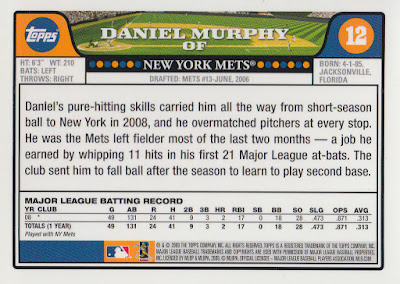 I'm sure the Mets will figure out some gruesome way to torture we the fans eventually, but until then I'm going to embrace the good feelings around this club.