The Trade that Wasn't 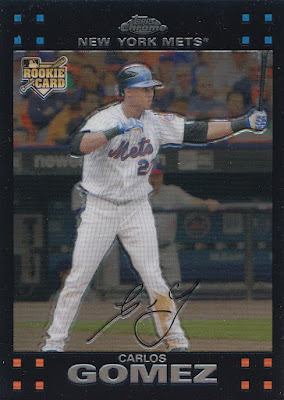 By now you know the story.  In fact, you're probably sick of reading/hearing about it.

The Carlos Gomez trade to New York that was and then--in the blink of an eye--wasn't sent Mets fans through the roof and allowed the rest of the league to snicker.  It was just one of the all-time lows in a roller coaster week for the Amazins.  But, the Mets bounced back from that in a big way when Sandy Alderson was able to work out a deal two days later to get Yoenis Cespedes from Detroit.  The club has been sky high ever since.

Welp, there isn't anything mysterious about Shane of Shoebox Legends fame.  He's simply a top-shelf dude. The guy has been consistently pumping out PWEs chock-full-of Mets to my mailbox for the past year or so.

The most recent edition of this practice arrived a few days ago and featured card of the aforementioned Carlos Gomez, who was a Mets prospect originally.  Prior to this faux-trade with the Brewers, Gomez was part of one of the biggest trades in Mets history when he was sent to Minnesota as part of a package to acquire Cy Young winner Johan Santana.

As for the card itself, it's a chrome refractor from 2007 Topps Update.  I had no idea Topps even did chrome Update cards prior to 2013, so I had to do a little research.  Of course, Baseball Card Pedia had the scoop: "One individually-wrapped Chrome Refractor Rookie was inserted as a box-topper in each Hobby and HTA box. Each card is serial-numbered to 415 copies."

A very cool addition to the Mets collection, and my new favorite card of Gomez!

But that wasn't the only chrome-y or shiny card in the lot... 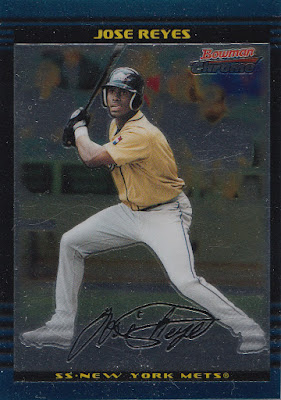 I have (and love) the base version of this card, so it's great to add the chrome version.  It shows a young Jose participating in the 2002 MLB Futures Game for the World team.  Reyes collected three RBIs and was named the game's MVP. 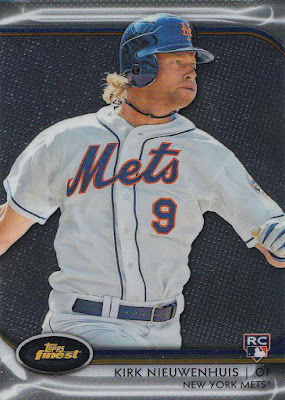 This is actually my first 2012 Topps Finest base card.  I'm not sure how I managed to not have any Finest cards from that year, but there you go.  Compared to some of the other Finest designs from this century, this one's not too bad.

That's some face Kirk is making, by the way. 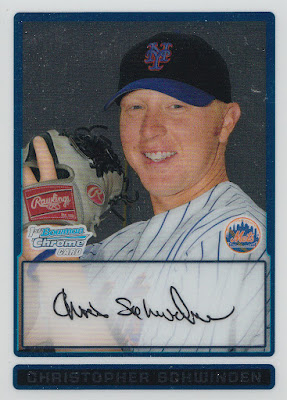 This is only my fifth card of Schwinden, who pitched in just seven big league games (all for the Mets) in the span of two seasons.  More notable than any of his on-field exploits was the employment odyssey he endured for roughly a month during the 2012 season.  Between June 2 and July 5, Schwinden was waived and claimed on four different occasions.  He went from the Mets to the Blue Jays to the Indians to the Yankees and, finally, back to the place he started--the Mets.  Talk about a busy, crazy month! 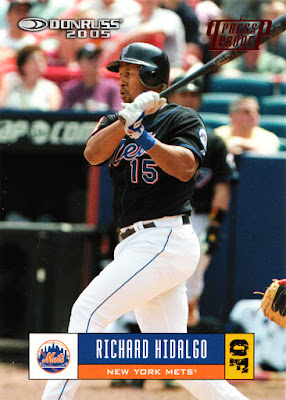 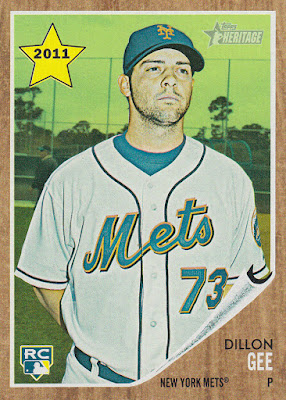 This is my introduction to the "green tint" parallels from 2011 Heritage.  I wasn't actively collecting Heritage brand at this time, so I'm not really familiar with these.  But, a little bit of poking around reveals that these were seeded 1:108 packs (both hobby and retail) and were a nod to the original '62 set which featured a series of cards that were printed with extra green ink.  Another awesome find by Shane! 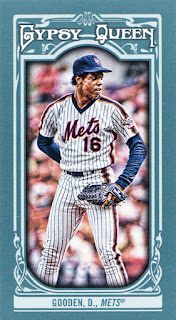 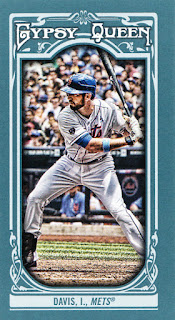 Minis are always cool acquisitions since I don't have very many of them.  I'm really looking forward to building a few pages of these mini cards.  I have a stack of Mets minis sitting in a little plastic case, but yours truly has been lazy in regards to buying the appropriate mini-sized pages from the hobby store.

And, we finish up with a pair of Vlad Guerreros... 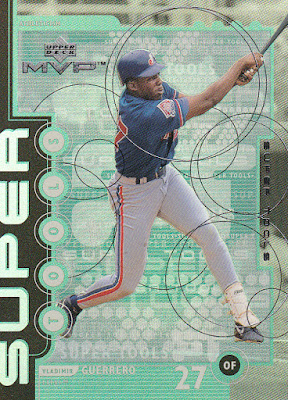 A "Super Tools" insert from 1999 Upper Deck MVP.  As usual, much nice and shinier in person. 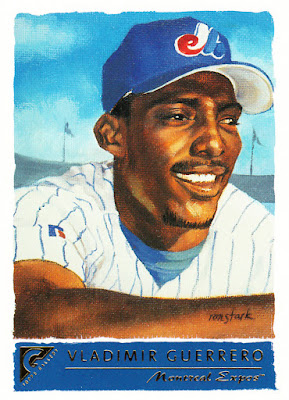 And another beautiful Topps Gallery card.  Nice in scan, nice in person.

Shane, buddy, thanks again for a bad-ass lot of cards!