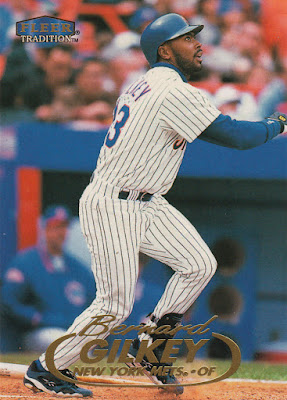 It's been quite some time since my last Zistle trade.  In fact, my post recapping Trade No. 14 was August 25!   But, these things usually come in bunches and, sure enough, I've completed a pair of trades recently on my favorite hobby website.  So, let's see what the 14th swap had in store for my collection.

In the lead-off spot, one of my favorite all-time Mets featured on a great-looking set from the late '90s: 1998 Fleer Tradition.  A great action shot of the multi-talented left-fielder, framed beautifully on this full-bleed, borderless card. 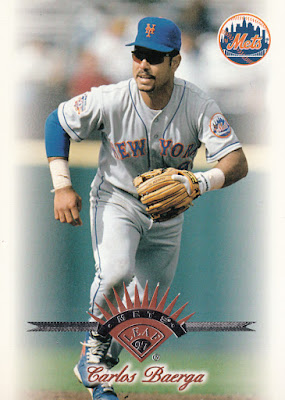 If you've read my ramblings in the past, you know I have a huge soft spot for Carlos Baerga.  Here, the former All-Star is shown on a 1997 Leaf base card.  Carlos was very much on the down-side of his career by the time the Mets acquired him at the '96 non-waiver deadline.  In spite of that, he never went through the motions and always busted his butt.  And that really appealed to a 17-year-old Me. 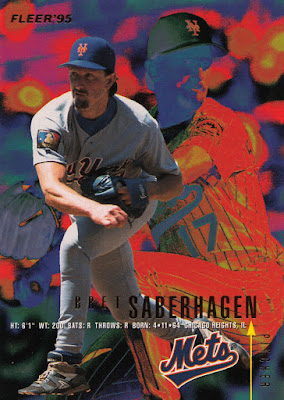 It's funny, I don't think I even realized Saberhagen was included in the '95 Fleer checklist.  I guess because I bought a retail box of the stuff back in the mid '90s from K-Mart when they still had a sizable trading card section.  Thus I figured I had all I needed.  I was wrong, as it turns out. 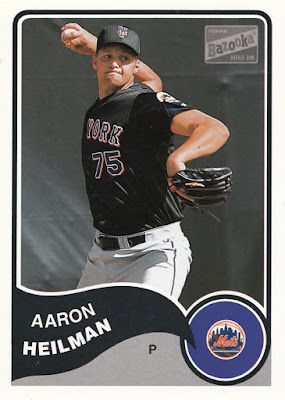 Another guy who I had a soft spot for, Aaron Heilman will likely be remembered by most Mets fans as the pitcher who coughed up Yadi Molina's extra-inning homer in Game 7 of the NLCS.  Anyhow, this is Heilman's base card from 2003 Bazooka.  I already had his 'mini' from this set, and now I've got the daddy. 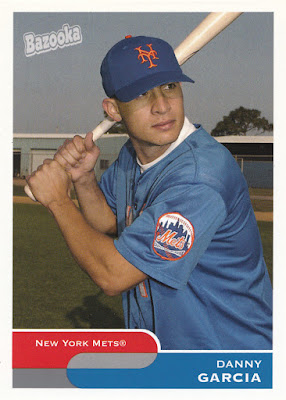 Another from Bazooka, this time the 2004 set.  This same photo was used on one or more of Garcia's cards from around this time.  Bowman or maybe Bowman Heritage or both.  I can't keep track.  Danny, by the way, is a former star at Pepperdine who played in 77 games over his two-year Mets and MLB career. 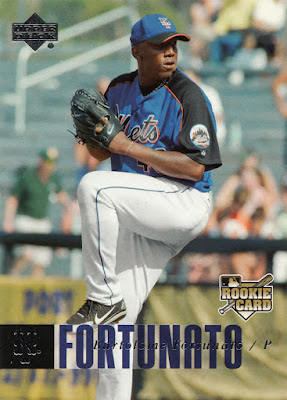 A great name who never amounted to much in the big leagues, Bartolome Fortunato was one of the players (along with Victor Zambrano) who the Mets got from Tampa Bay in the Scott Kazmir trade.  Over the course of two years in New York, Bart crafted a 7.06 ERA in 17 games. 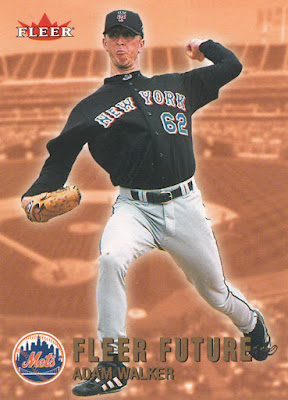 This is a neat card that was on my Zistle want list for a while.  Though, I admit that doesn't indicate a whole lot since pretty much every Mets card I don't have is on my want list.  Nonetheless, I like the looks of this one. Adam Walker was one of the young arms from the Phillies system the Mets received in exchange for bullpen tandem of Turk Wendell and Dennis Cook in 2001.  Walker never made it beyond Triple-A.

And, we'll wrap up this trade with a pair from Fleer Tradition's 2003 offering.  We began the post with Tradition, might as well end with it, right? 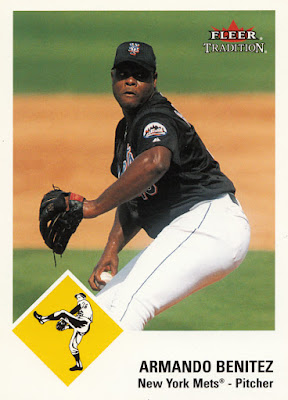 As bad a taste as we Mets fans may have about Armando's time in Flushing, he still stands as the single-season saves leader in team annals with 43.  Well, he shares the honor with Jeurys Familia who met the mark this past year.  Armando also is second on the club's career save list with 160. 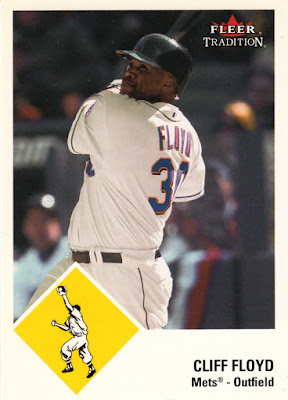 Slugger Cliff Floyd was hampered by assorted injuries throughout his career, but he still logged a pretty impressive resume.  Of his 233 big league homers, 81 came during his four-year stint as a Met.

A pretty nifty nine-card assortment, if I do say so.  Thanks go to Zistle member paulb for working out the deal with me.