Topps Now (from back then) 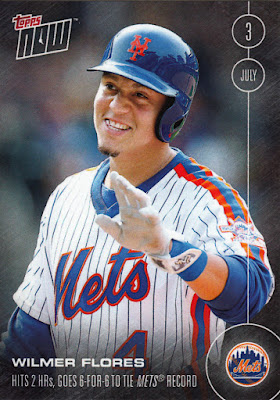 I think I've been pretty disciplined when it's come to the Topps Now and Throwback Thursday cards issued via the company's webiste this year.  I don't snag every Mets card that pops up (though I'd certainly like to!). Furthermore, I've found a couple good sellers on eBay who offer them for a wholesale price and will still ship them for free.

With that in mind, I'd like to share a few cards from July's Topps.com buffet that I couldn't reasonably resist. After all, I'm only human.

Before I begin, a quick note: Since I'm obtaining the cards through the secondary market, it takes 'em a little bit longer to get to me.  You know, since Topps needs about 10 days to get them to the original recipient and then tack on another week or so for the vendor to check his bulk order and package all the cards for redistribution, etc.  In short, it takes about three weeks for me to get my Topps Now cards.

It's not instant gratification, but it's as close as I'm gonna get.

Okay, now let's get to the cards!  In the lead-off spot is a card that was a no-brainer for me to acquire.  A no-brainer on multiple levels, actually.  The first of which is that the memorable moment occurred on my birthday -- July 3.

On that day, the Mets clobbered Jon Lester and the Cubs by a 14-3 count.  It was a nice way to celebrate my birthday, I can tell you that!  We had a BBQ at Kaz Manor that afternoon and every time I came inside from flipping burgers and dogs, the Mets had seemingly scored another run or two. 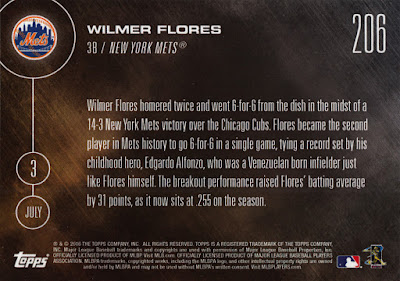 Anyhow, as you can read above, the star of the show was Wilmer Flores, who equaled a club record by going 6-for-6 in the contest.  The neat part of the whole deal is that the man whose mark Wilmer matched was his boyhood hero -- and fellow Venezuelan -- Edgardo Alfonzo.

I guess now I can stop bragging about how Alex Ochoa hit for the cycle on my 16th birthday in 1996. (Okay, probably not, but Wilmer's brilliant day at least supplants Ochoa's as the most recent magical and/or historic Mets moment that occurred on July 3.) 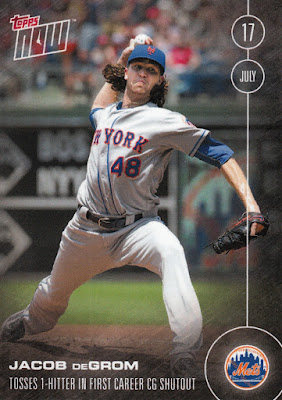 By the grace of God -- plus my dad, who purchased the tickets as part of my birthday present -- I was in the house for this next Now moment.  It was without a doubt the most dominant pitching performance I've ever been on hand to witness.  Making it even more enjoyable was the fact that Citizens Bank Park was about 3/4 Mets fans, so the energy and exuberance from the seats was palpable. 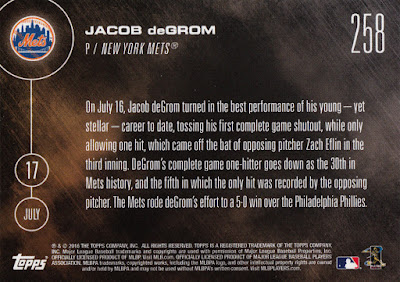 Of course, the stinkin' pitcher was the only batter to reach base via a hit.  Otherwise, Jake didn't allow a runner to second base the entire game and the Mets rolled to an easy win in Philly.  It was a masterpiece in every sense of the word, thus I couldn't pass up a special card to commemorate it!

And, we'll conclude the proceedings with a card from one of Topps' Throwback Thursday mini-sets. 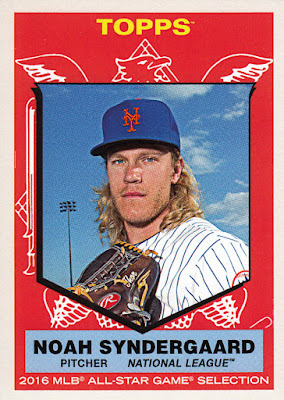 When I found out Noah was going to be a part of this particular Throwback set, I knew I had to get on eBay and find a single for sale.  Luckily I was able to snag this one for a shade under five bucks.  I love the '59 All-Stars design!  One of the most iconic in the company's history. 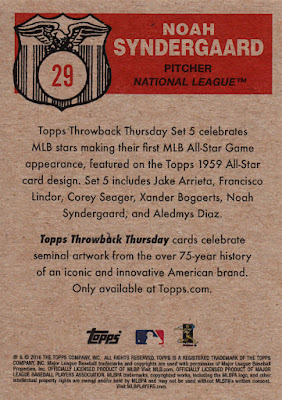 While the Topps Now cards are more or less in the vain of Stadium Club cards, these Throwbacks are of the same stock as Heritage.  Perhaps a bit sturdier and tad shinier on the front.  Regardless, this is a neat card that I couldn't resist.  I'm a big fan of Noah's and I wanted to have something unique to memorialize his first All-Star Game selection (even though he didn't pitch).

I hope I'm tempted many times over the next few months because that means the Mets are actually putting together some wins as the pennant races heat up!