[Ed. Note: This is the first of what will hopefully be a regular feature on my blog. I'll be highlighting some of my favorite cards from my collection. This may include cards from a Topps complete set or of one of my player collections. Well, it may include anything, really.  Why bother setting rules that I don't intend to keep, right?] 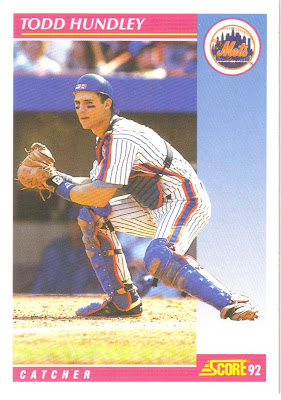 Before Mike Piazza brought his rock star persona and Hall of Fame bat to Flushing in May of 1998, Todd Hundley was the main man for New York's National League club.  Son of a former big league catcher, the switch-hitting Hundley struck fear into opposing pitchers and, when he donned the gear, was tough as nails behind the plate.  Sure, he had a propensity for strikeouts and never really batted for a great average, but Hundley was a true slugger in every sense and a team leader for the Mets during their upswing of the mid-to-late '90s.  The crown jewel of his career came in 1997 when he swatted 41 home runs to break Roy Campanella's long-standing record for homers by a catcher, establishing a Mets franchise record as well.

The 1992 Score set probably won't win many beauty contests among collectors, but I have a soft spot for it.  I remember collecting a lot of these cards when I was 12.  Lots of great action photos to be found throughout the set, including the above entry.  I especially love action shots of catchers, and Todd happens to have a lot of cards that fit this bill.  Blocking the dish was always one of Hundley's strong suits, and this '92 Score card captures that perfectly.

What I Learned from the Back of this Card:  In 1991, Todd batted .133 in 21 games with one homer and seven RBIs for the Mets.  Most of that season was spent at Triple-A Tidewater, where he crunched 14 long balls, drove in 66 RBIs, and placed fourth in the International League with 198 total bases.