A Trip to Toys R Us


Mrs. K and I went out to Olive Garden for dinner Friday night and on our way home we figured, Hey we're both in our 30's and it's Friday night, let's stop at Toys R Us before we go home and fall asleep watching the opening ceremonies of the London Olympic Games.

I know this sounds a little too wild, even edgy.  But we enjoy living on the edge sometimes.

Anyways, so once inside said toy store, we swing by the trading card kiosk to see what's what.  For whatever reason, Toys R Us absurdly marks up their trading cards.  I'm sorry, but a 12-card pack of Topps Series 2 should never cost four bucks.  The hanger boxes, usually around 10 bucks at Wal-Mart or Target, were going for about 12 and change.  No thank you.

But, what caught my eye were these guys: 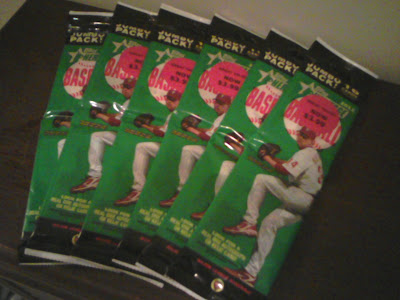 Okay, now that actually is pretty good value.  Especially when you consider that the regular Toys R Us price for these packs was in excess of $6. Plus, I mean, the rack packs of 2012 stuff (Heritage, Archives, etc.) is $5 and up at the box stores, so this was too good to pass up.

Originally, I was only going to buy just two packs.  But there were only six packs left and I don't know where else you're going to find 2011 Heritage packs for this price.  Translation: I have zero will power.

So I scooped 'em all up and hustled to the register.

I opened half last night and left the other three for this morning.  The first round of packs netted me a great assortment of cards, including some SPs, a Sabbathia insert and a chrome Josh Johnson (has he been traded yet??).  Keep in mind, I need a lot of cards for this set, so pretty much anything was going to make me a happy camper.

Fast forward to this morning, and the second pack I ripped into greeted me with this: 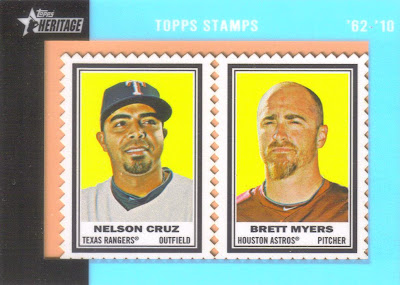 Holy cow!  A "Framed Topps Stamp" of Nelson Cruz and Brett Myers numbered 46/62!  Stated odds for finding one of these in a 2011 rack pack is 1:116.  What a cool looking card!  I'm not really head over heels for either of these players, but I'm pretty psyched to get such a great hit.

Two weeks ago I got a bat relic in the blaster that Mrs. K bought me, and now this stamp card after opening six rack packs.  I think it’s safe to say 2011 Heritage has been berry, berry good to me.

I guess sometimes it pays to have suspect will power...