To my pleasant surprise when I came home from work Monday, my mailbox contained a pair of manila mailers that could only contain one thing: baseball cards from the wonderful blogosphere!  I was expecting each, but wasn't sure when.  Getting them both on the same day was certainly a treat.

The first one was via Robert at $30 A Week Habit, a blog that I am a big fan of.  I initially reached out to Robert because I had some '86 Topps for his base set.  After an exchange of emails, he offered to send me some cards I needed for 2012 Topps Series 2 -- a set that I've kinda neglected of late.  I tend to get pulled in every direction and lose focus a little bit when it comes to collecting.  Anyhow, the cards he sent were great.  Some of my favorites from the lot:

Nothing bad that I can say about the design and photography of the 2012 base set.  In fact, this is one of my favorite Topps base sets in a long time.  And now I'm much closer to completing Series 2.  Thanks for a great trade, Robert!  I look forward to future exchanges...

Then there's Marcus at All the Way to the Backstop.  I really love Marcus' blog and following his Padre-collecting exploits.  Because he's a tremendously nice guy, he emailed me about a week or so ago and said he found some cards that I thought I might enjoy.  Well, they arrived today, and he was certainly right.  A very cool group of cards, including some nice additions for my player collections.  Here are just a few:

The Kid, Will the Thrill, and A-Rod.  Nice!   He sent me a bunch of other Clarks, plus some great Robin Ventura cards and a few random Mets players.  Back to that A-Rod card for a second, though.  It had me scrambling to various trading card websites to figure out what the heck it was, since the back did not have a number.  Sure enough, I discovered it is a short print from the 2010 Topps 206 set.  Awesome!!  And, while we're on the topic of stumpers, how about this sweet David Wright card that had me scratching my head: 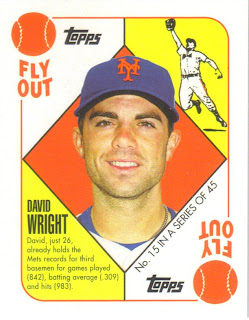 Other than gleaning it's a 2010 Topps card, I wasn't sure what this was.  It's a mini-card and it's No. 15 in a series of 45, apparently.  Hmm.  I'll be honest, a lot of the Topps inserts prior to 2011 kinda escaped me.  So, I hopped over to the Trading Card Database and did a little further Googling and found out this is a "1951 Red Back" insert from 2010 Topps Target retail packs.  I love it!  Yes because it's David, but also because it's a brilliant insert.  I'm gonna have to hunt down some more of these bad boys, for sure.

Thanks for the kind gesture, Marcus!  And for the rare cards of the two NY third basemen!  A collection of Padres cards will be coming your way in the not-too-distant future.

These are my second and third trades, respectively.  It's pretty amazing (and fun) to be able to trade with fellow collectors from coast to coast.  Just another tremendous facet of this blogging community.