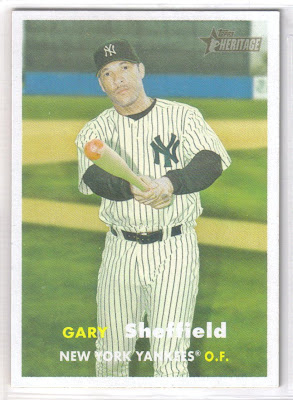 Most of you already know this, but Adam at ARPSmith's Sportscard Obsession runs a weekly Wednesday contest.  And the prizes for winning those contests are pretty snazzy.  Usually it just involves leaving a comment on a specified post and hoping your name comes up roses via a randomizer application.

This time around, it was a World Series prediction contest.  My guesses of "Giants in six" and "Sandoval as MVP" and "39 total runs" generated enough contest points to out-score the rest.

As a contest winner, you get to peruse the prize page and choose your spoils.  There were some great relic cards, even a few nice vintage.  But, my attention was immediately drawn to a random 50-card lot of 2006 Topps Heritage cards.

This being the first year that I've really fallen into the Heritage trance, I missed out on a lot of great cards -- and a lot of outstanding retro designs -- over the past decade or so.  One of those years that passed me by was '06, which paid homage to the 1957 Topps set.  A pretty basic, yet attractive design.

So I was naturally anxious to get these cards and see what the 2006 Heritage set had to offer.

Well, I wasn't disappointed.  Adam put together a great assortment of players, including some big-time names -- like Gary Sheffield, above.  And, as they seem to do with the Heritage sets, Topps hit a home run with the photography.  Classic poses mixed with some good in-game action shots makes for a nice set.

Here's a look at some of my other favorites from the winning lot: 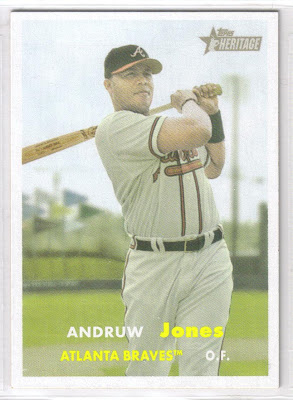 Andruw was coming off a 51-homer season for the Braves in 2005, and there were fewer hotter names in collecting.  Albert Pujols, one of those names, eked out the NL MVP vote over Jones that season. 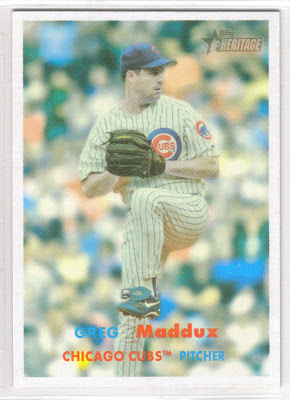 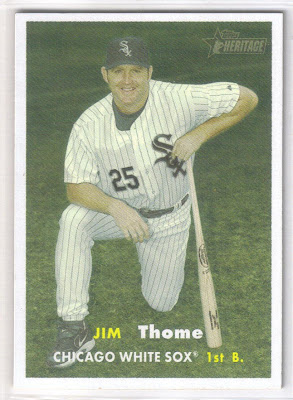 For a man with lumberjack strength, this pose is tremendously appropriate for Thome, who had just wrapped up a three-year run in Philadelphia. 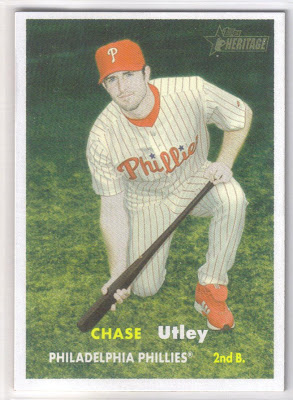 Speaking of Philly, Utley's 2005 season for the Phillies was a breakthrough affair, to put it mildly.  In 147 games, Chase cracked 28 homers with 105 RBIs.  A star was born. 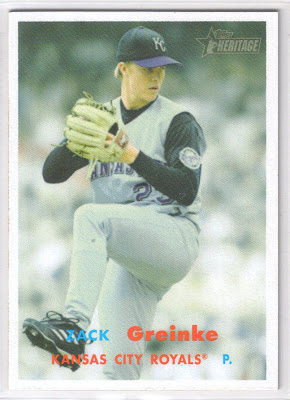 Did you know Greinke's actual first name is Donald?  Well, Donald Zackary Greinke lost 17 games for the Royals in 2005 and was still a few seasons away from putting his anxiety issues behind him. 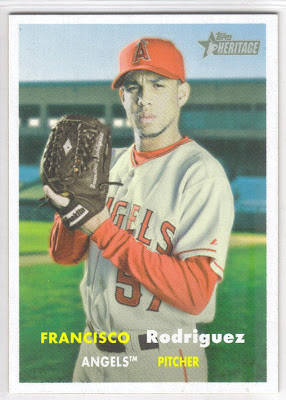 A very svelte K-Rod was at the top of his game in the mid-00s.  He dominated AL batters en route to compiling 194 saves from 2005 to 2008.  A few years later, he would hit fast food joints hard and give Mets fans heartburn while figuring out new ways to blow 9th-inning leads.  I digress, though. 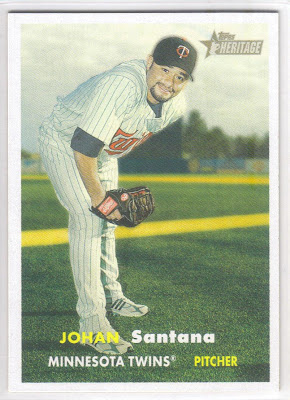 Good ol' Johan.  It looks like he's hunching over to fit into the frame of the card.  Appropriate, since he was a larger-than-life ace for the Twins, and then the Mets.  Sadly I think his best days are behind him due to arm issues.  At least he gave the gift of a no-hitter to Mets fans in 2012. 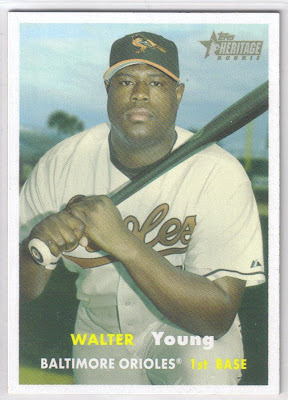 Whoa!  Big boy!  I can't say I was previously familiar witih Walter Young.  At first glance, it appears one of the linemen from Baltimore Ravens stumbled into the Orioles' photo session.  And, after checking him out at Baseball-Reference.com, it appears that scenario isn't too far fetched.  His major league career spanned 14 games over the 2005 season.  And, oh yeah, his uniform number?  How about 75.

So there it is.  Count me as a fan of 2006 Topps Heritage.  I can't say I'll be working on this base set any time soon, though.  Too much work to be done on this year's set, plus I'm already pretty deep into the 2011 edition also.  But, it's great to add these cards to my collection.

And, remember, if you haven't taken part in any of Adam's contests, make sure you hop on over to his blog each Wednesday and throw your hat in the ring!