[Ed. Note: Hiya gang.  I figured a good way to show some love to the non-superstar players in my Mets collection would be to occasionally feature a card at random.  So, I'll just blindly pluck a card from one of my Mets boxes and let 'er rip.  Hopefully I can be consistent and make this a semi-regular feature.  You know, just for laughs...] 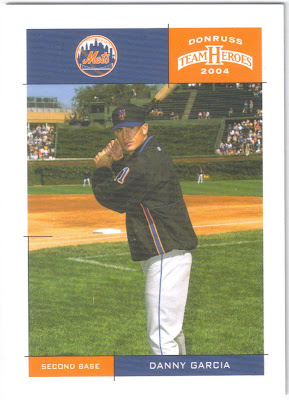 Today's Have You Met...? comes courtesy of a 2004 Donruss set called "Team Heroes."  Not familiar in the least with this product, but I checked it out via The Trading Card Database.  Looks like each team's checklist features an assortment of established players, up-and-comers, and one or more retired representatives.  In the Mets' case, Keith Hernandez and Nolan Ryan fill the bill in the latter designation.

For a brief second, some Mets fans felt that Garcia could be an answer on the infield for the Amazins.  At the very least in a utility capacity.  Then those fans -- myself included -- woke up, I guess.  Garcia batted .232 in 58 games for N.Y. in 2004, his final year in the Majors.  He has the distinction of being one of the seven human beings who played at least three games at the second sack for the Mets in '04.  Garcia's 44 nods were tops on a list that also included the likes of Joe McEwing, Jeff Keppinger and Ricky Gutierrez.

Garcia was last seen playing independent ball for the Somerset (N.J.) Patriots of the Atlantic League in 2007.

The Mets' second base position, meanwhile, continues to be a mash-up of mediocrity.

Well, not a very uplifting way to begin this feature, but certainly fitting for a franchise bejeweled with a proud history of lovable losers.

See ya next time!