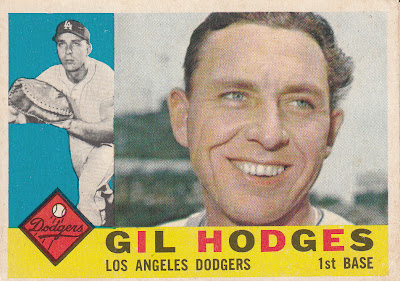 Another great card show took place at my local fire hall on Sunday.  The last monthly show of 2012.  I've been able to gain a lot of great pieces for my collection over the past calendar year, and yesterday's show was a pretty good way to cap it off.

I knew I wanted to get a vintage card or two at the show, but I wasn't really sure what I was looking for.  Usually, I just wait for something to really hit me.

And the above Gil Hodges card did just that.  I can't say for sure the reason, but I just like the way Dodgers cards look on the 1960 Topps design.  And, well, Hodges is not only a Dodger legend, but also a man of Met greatness (See: 1969).

At the same table, I was able to parlay a deal for the Hodges card plus this sharp number: 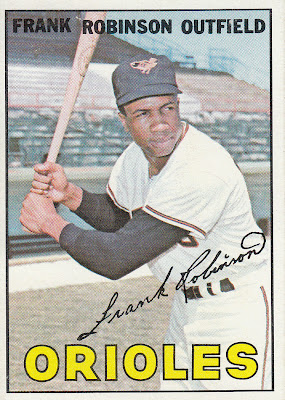 This one is in fine condition.  Four very good corners and nice, bright colors.  I knew I had to have this once I set eyes on it.  Firstly, it's Frank Robinson as an Oriole -- something my vintage collection is lacking.  Along the same lines, I don't have much in the way of 1967 Topps.  So this killed two birds with one stone.

Frank had just wrapped up the AL Triple Crown plus his second MVP award, thus becoming the first man to win the MVP in both leagues.  So that made owning his '67 issue even more important.

I was going to call it a day in the vintage department with these two until I came across a nicely maintained table with boxes of 1970 and '71 Topps commons for half-a-buck each. 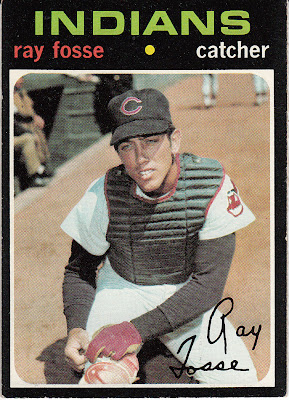 I came across this Ray Fosse card after a minute or so of digging.  The only thing I really knew about Fosse is that he was the guy who Pete Rose barreled into during the 1970 All-Star game.  But what I didn't know is that Fosse finished fifth in the AL in batting (.307) during that '70 season and also won his first Gold Glove award. Fosse would reach the All-Star Game and win another Gold Glove in 1971, but his career had basically reached its zenith at that point.  After swatting a combined 30 homers over a two-year span, he only totaled 35 over the final six years of his big league time.

Since I wanted to spend a whole dollar at this one table, I searched onward after securing the Fosse.  And once I transitioned into the 1970 Topps section, I thankfully came across this awesome card of a true Mets hero: 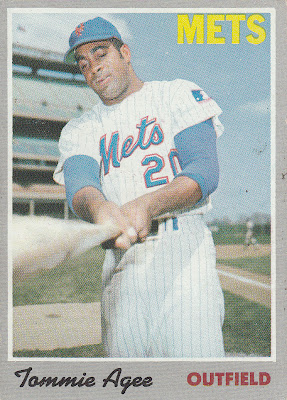 The camera angle coupled with his swinging motion (not to mention the stoic, focused look on his face) makes Agee look appear as a larger-than-life figure.  And, for the Mets during the 1969 Series, he truly was thanks to a pair of incredible catches in Game 3.  Tommie smashed 26 homers for the Amazins during that magical '69 season, just two years after coming over from the White Sox via trade.

A man who accompanied Agee to New York in that 1967 trade was Al Weis: 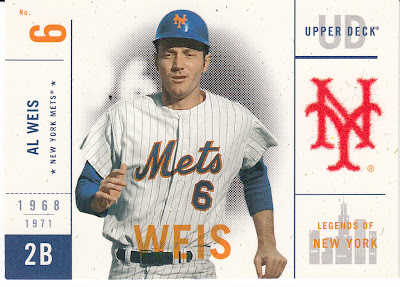 I only learned this because it said so on the back of this 2001 Upper Deck "Legends of New York" card, which I just so happened to coincidentally snag in a dime box at the same show.  Funny, right?

But, I'll save the rest of my dime box finds for my next post...