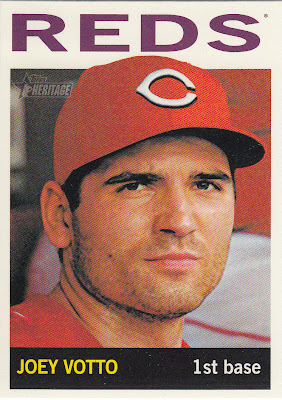 I've been anxiously awaiting the arrival of 2013 Heritage for months, and last night I was finally able to scratch the itch.  The Wal-Mart in Pennsville, NJ was fully stocked with blaster boxes and rack packs of the new stuff -- a whole day early.  I was only too happy to scoop up a pair of blasters and thus begin my voyage into this year's tricky set.  I've already vented about the SP checklist, but I'll leave that venom out of the discussion for now.  I have all spring/summer/fall to harp on it.  This post, instead, is all about the good feeling that new Heritage cards generate.

As you can see with the Joey Votto above, the present-day players looks terrific on the '64 base design.  And, as is the case with Mr. Votto's card, 2013 Heritage is chock-full-of super tight head shots and various posed portraits. 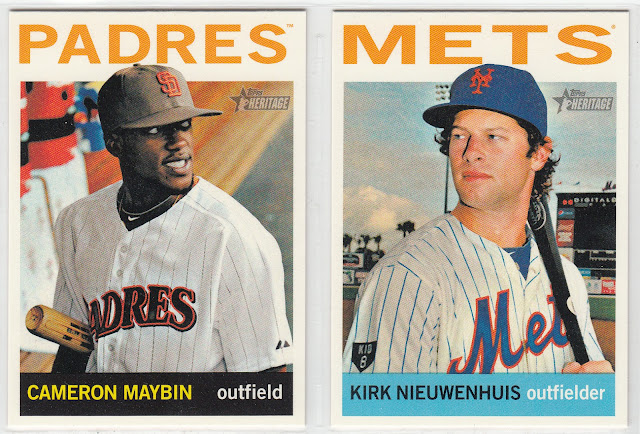 Here are a pair of my early favorites from the 425-card base set.  It's nice to see a retro uni slip into the mix. Cameron Maybin does a nice job of showcasing the orange n' brown of the Padres.  Meanwhile, Captain Kirk was the lone Met that I stumbled upon in 16 packs.  Kinda looks like these two fellas are eyeing each other up, no?  Each with a smugness about them.  I smell a sitcom in the future...

I mentioned my short print gripe earlier, so I'm happy to report that I amassed six SPs thus far.  Only 69 to go...  Ugh. 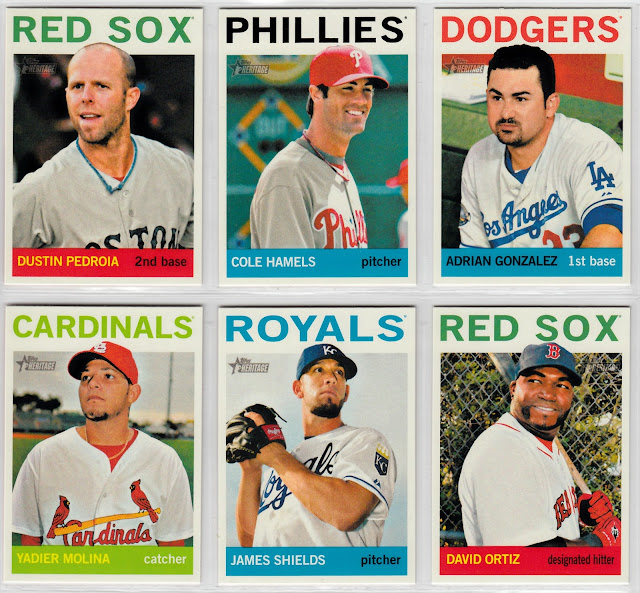 Kinda funny; a Big Papi SP was also in my first blaster box of 2012 Heritage.  I guess it's a rite of Spring.  I love how the Royals players look on the '64 platform.  Big Game James looks nice in his new duds.

You see that Pedroia?  Here it is again, this time with a nice coat of Wal-Mart blue: 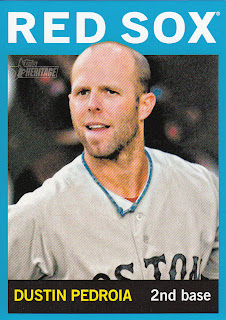 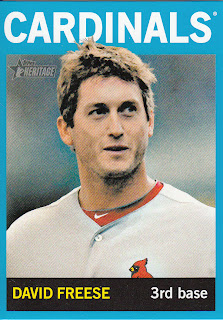 The retail store blasters each feature one special colored-border variation card.  You know the drill: blue for Wal-Mart and red for Target.  Ironic that I got a Red Sock and a Red Bird with the blue border.  Heaven forbid Topps put these two guys on the Target checklist.  Eh, what are you gonna do? 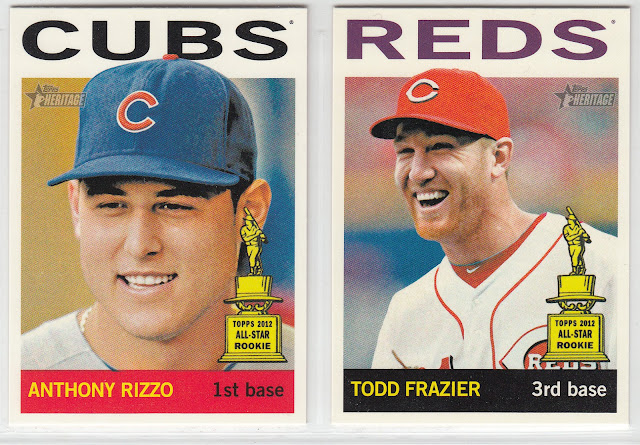 My first two All-Star Rookie cards.  I got this Rizzo twice -- one in each blaster.  Twice as nice, I suppose. On the right, someone must have told Todd Frazier a doozy of a Yo Mama... joke.

Here's a dual sampling of the multi-player cards: 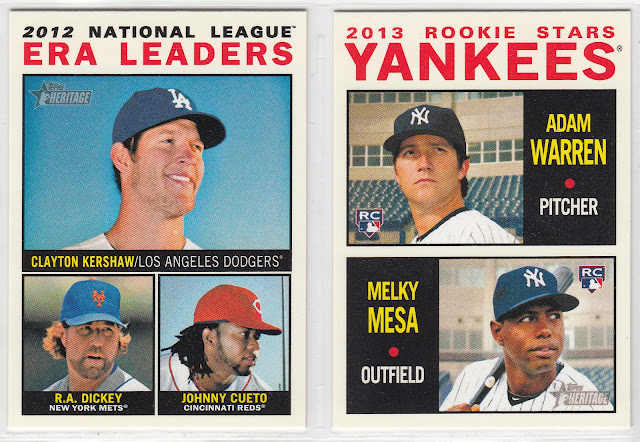 Oh, hey, there's another Met appearance.  Forgot about Mr. Dickey's little Brady Bunch window on the NL ERA Leaders card.  The Rookie Stars cards are sharp looking.  Some of them feature two rooks from the same club, while others are split between two teams. 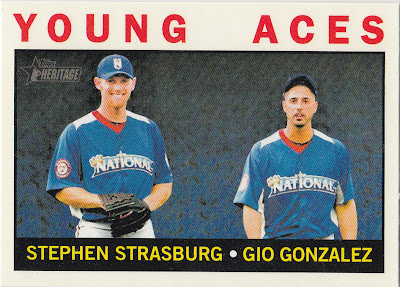 I love these special base cards that feature notable teammates or foes.  I particularly like how Topps chose an All-Star photo of Stras and Gio. 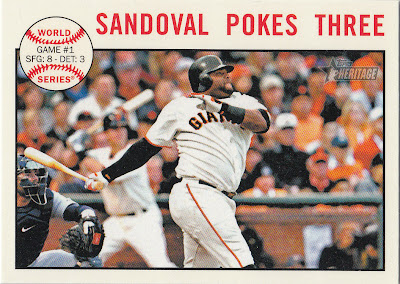 The World Series recap cards look tremendous this year, too.  Gotta love the Panda!  Unless you're a Tigers fan, I suppose. 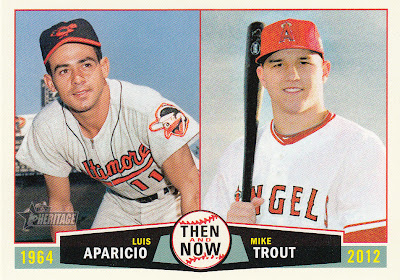 I wasn't lucky enough to land a Trout short-print, but I'll settle for his "Then and Now" card with Luis Aparicio.  If you're wondering what the connection is, both players led the AL in steals the prior seasons. 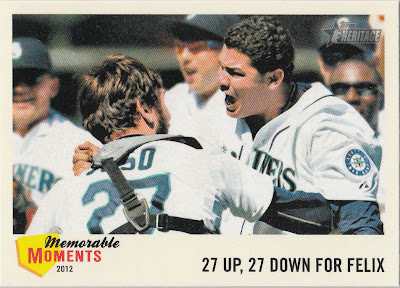 Super cool photo choice for this "Memorable Moments" insert.  King Felix is emoting after his perfect game. Like the Rizzo trophy card, I got dupes of this one, too.  Kinda sad that I've already got a mini stack of doubles working.  But, that's kind of expected with Topps nowadays. 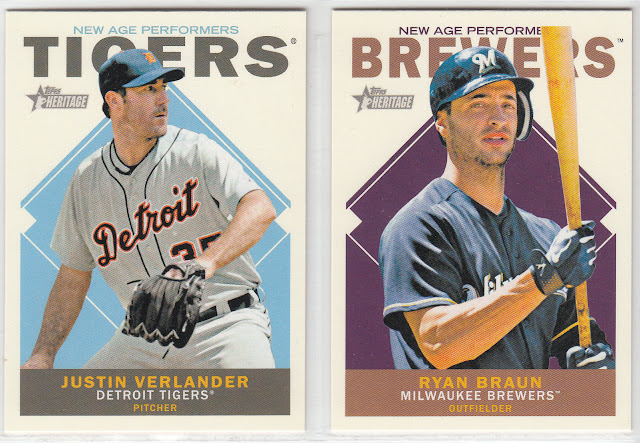 The NAP cards are quite handsome this year.  It's a nice touch that these inserts retain nearly the same composition as the normal base cards -- big team-name block lettering up top and a matching color bar down below.  Of course, the complimentary colored diamond in the background is the biggest difference.  Very nice cards. 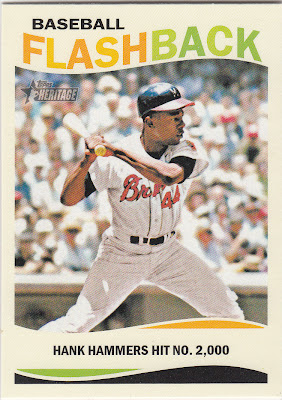 Yup, "Baseball Flashbacks" have also returned.  They are wavy and kind of tie-dyed this year.  Why do I feel like Topps has used this Aaron photo before?  As in every year.

Lastly, I was able to pull just one chrome parallel out of the two boxes. 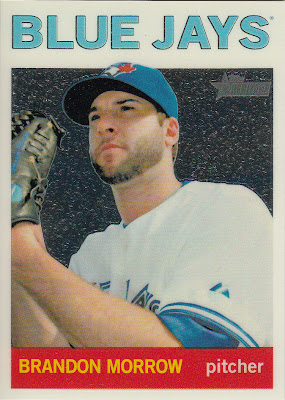 These are numbered to /999.  Well, at least that Brandon Morrow card was.  Who knows what other sorts of sequential serial numbering Topps cooked up.  Normally the regular Heritage chrome parallels are numbered to the year of the respective vintage set.

So, a modest start, but a start nonetheless.  I loved how they cards looked when I viewed them online and I love them even more up close and personal.  I think a hobby box is still in my future, but we'll see.

I'll look forward to seeing how my fellow bloggers feel about the new cards in the coming days and weeks.  And what sort of luck others have in terms of landing some cool inserts and hits.