Finally we have arrived at the top five cards.  Boy, I can't tell you how tough this was.  I truly could have justified any of these as being my personal favorite from the set.  But, there can only be one No. 1.  So, here we go with the the fourth runner-up... 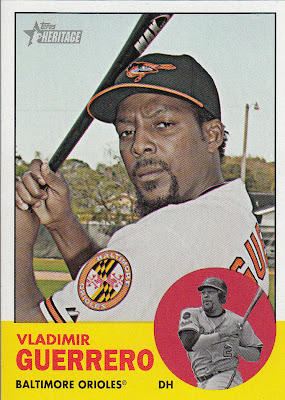 Like I said, I could easily justify this as the numero uno card of 2012 Topps Heritage.  After all, this is one of my favorite ballplayers of all-time, and a sure-fire Hall of Famer on top of that.  Also, we must pause to consider that this is the final Heritage base card we shall ever see of Vlad.

This is a beautiful shot of Guerrero.  A nice, crisp close-up portrait which showcases his preference to bat sans batting gloves.  We get a clean shot of the colorful and unique patch the Orioles feature on their left sleeve.  I've always been intrigued by the Maryland state flag, and was excited to see the club incorporate it into a uniform element a few years ago.

And, I may be mistaken, but this is one of the first times (only time?) we've seen Vlad listed as a DH on a card. To me, this is a pretty big deal; a pretty big transition in the career of a truly great player.  After all, Guerrero made himself into a notorious talent not by his lethal bat alone, but also by his tremendous arm.

I'd say Vlad was equally amazing at the dish as he was in the field.  As high and deep as he ever launched a baseball with his bat, more so I'll readily conjure mental replays of the throws he used to make from the warning track -- on the fly -- to gun down a runner at the plate.  Talk about a freak talent.

Without a doubt, this card serves as a fine farewell to one of the true treasures of the game.