The weekend is winding down (or it's over, depending on when you read this), and I have a whole pile a cards to sort through after attending the monthly card show at my local fire hall.  But, the 2012 Heritage countdown must go on!  After all, we're but a week from the '13 edition popping up (most likely) at retail stores and I'm not even halfway done.  So let's get this thing going with the no. 8 card... 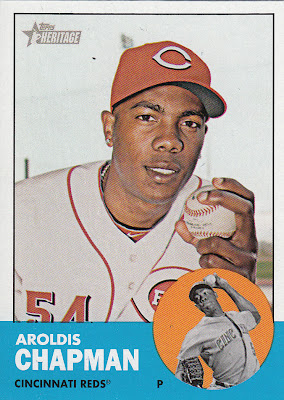 A widely repeated formula for 2012 Heritage's photography is having a pitcher pose with baseball-in-hand.  There are tons of cards in the set that feature such composition.  Heck, on certain binder pages, you'll see this pose -- or some similar derivation -- repeated four or five times.  It can kinda get tiresome.

But, for the right pitcher, this type of photo is killer!  And my choice for the card to represent this photo type is fireballer Aroldis Chapman, one of the most exciting pitchers to watch on a nightly basis.

This absolutely has the right look for a Topps Heritage card.  Totally timeless.  The uniform of the Reds has barely changed, looking just as classic as always.  And Chapman doesn't have any unusual piercings or a long jet-black beard or shoulder-length braids, etc.

He effortlessly holds the ball with a four-seam grip, making his craft seem easy in a boyish kind of way.  His expression is both amiable and conversely menacing in a knowing sort of way.  You see this?  Good, cos you're not gonna come close to hitting it.

Also, I love the look of the blue/orange design combination on the bottom, even if it stands in contrast with the red of Chapman's cap and jersey elements.

Not a lot of bells and whistles involved with card no. 8 of the countdown, but it's a terrific example of the simplicity that makes Heritage a great brand.