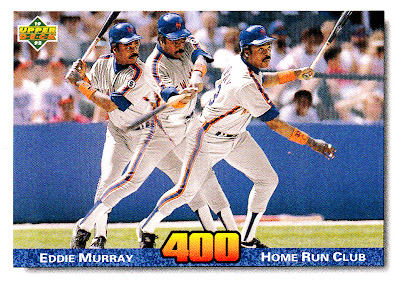 Over the past day or so I've made a few allusions to the monthly card show at my local fire hall.  It took place, as usual, on the final Sunday of the month.  Naturally, since I have very little discipline when it comes to baseball cards, I was there for an hour or two or three.

This time around, I couldn't be helped as there were an unusually high number of vendors with discount boxes galour.  Most of the usual sellers were there, but there seemed to be an infusion of new faces, also.  And even the regulars seemed to bring an extra box or three of discounted cards -- dime box and penny box varieties both.

It was a heavenly afternoon to say the least.  So much so that I came home with two paper lunch bags full of cards instead of my customary one.  Mrs. K was keen to notice.  But, she bought yet another purse on her trip to the mall that very same day, so nobody was casting an accusatory eye in either direction.

I was able to load up on a ton of great cards of some of my favorite players.  But I also found some stuff that was just plain neat.  Like the above Eddie Murray card.  Murray's milestone shot came in an early-season rout of the Braves, placing him in elite company as only the second switch-hitter to reach the 400-homer plateau.  The other being The Mick. 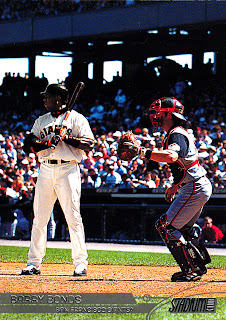 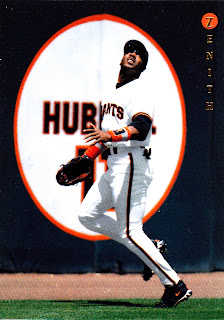 I used to automatically grab any and all Barry Bonds cards I found in a dime box.  I was obsessed with his star power I guess.  I've kind grown out of that, though sometimes it is unavoidable.  These are the only two Bonds cards that I came home with, and both are pretty amazing I must say.  The TSC card on the left may represent the only baseball card that features an "action" shot of an intentional walk.  It serves as a perfect capsule of Bonds' baseball existence from that era of his career.  Meanwhile, the Zenith card on the right is pure art.  Bonds and his shadow chase down a deep fly at Candlestick, right in front of the retired number of Carl Hubbell.  Even the most avid Bonds hater can't deny the beauty of the moment captured here. 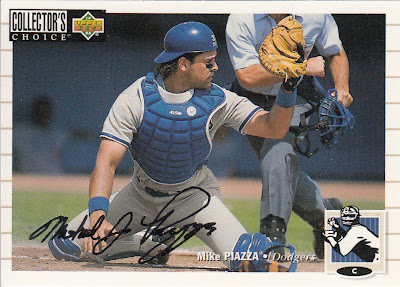 Speaking of capturing a moment, a young Mike Piazza gets affirmation of his defensive deed from the home plate umpire on this Collector's Choice piece.  And it's a silver signature card, to boot.  One seller had a boatload of parallels and serial numbered cards, for which I'm a sucker. 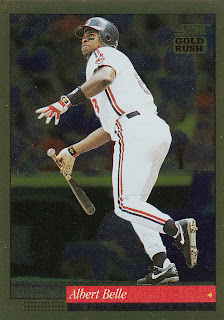 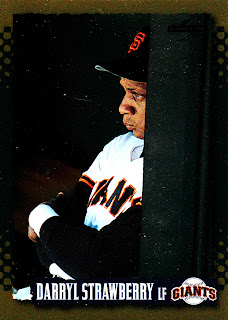 Yup, parallels.  Mid-90s Score "Gold Rush" cards were fantastic.  Whether it's the mighty Albert Belle sending one into orbit, or a mercurial Darryl Strawberry sulking in the San Fran dugout, gold makes everything that much more enjoyable. 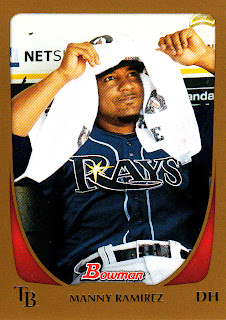 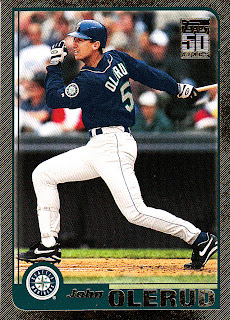 I'm a little partial to the gold theme, what can I say?  Then again, gold or not, cards of the oft-zany Manny Ramirez and sweet-swinging John Olerud are always welcome additions to my collection. 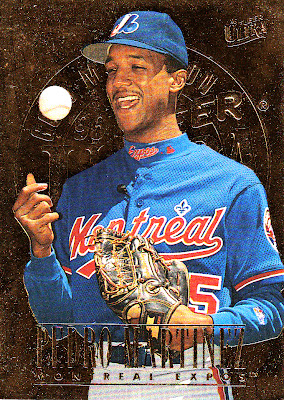 Were you sick of gold yet?  But, it's Pedro Martinez, and he's young and having fun in a Montreal uniform.  Can you really be put off by such an indulgence? 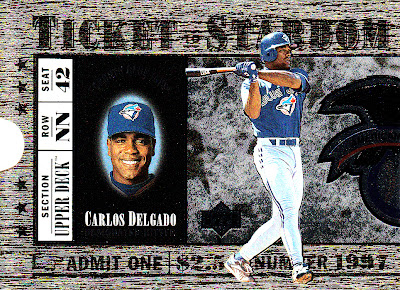 I was a little dismayed that this one didn't scan better.  It's another golden-hued card; an insert meant to mimic a ticket stub.  Hence the "Ticket to Stardom" heading.  Clever, I know.  Anyways, this is a great late-90s Upper Deck insert that is a real gem to the naked eye.  You'll have to take my word for it. 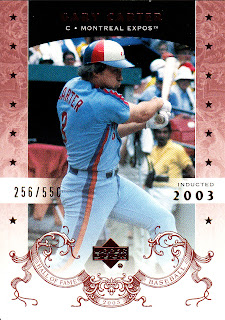 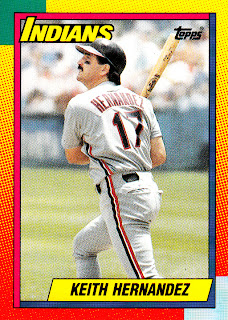 Gary Carter and Keith Hernandez will always be a paired proposition in my Mets-loving mind.  Both were veteran cornerstones of New York's rise to greatness during the 1980's.  Both came to the Mets as established superstars, and both delivered in a big way just before their prime playing days expired.  That 1990 Topps Traded of Keith might just be my favorite Mex card of all-time.  I guess it could be sentimental, as this would be Hernandez's swan song on a Topps card.  Still, it's a great photo of a fine hitter. 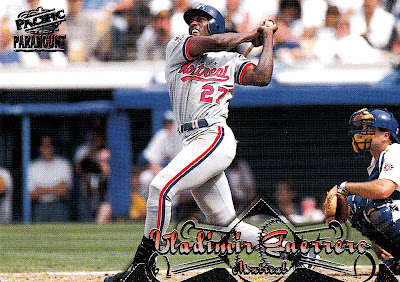 I can't say I've come across this edition of Pacific Paramount previously, but I absolutely dig it.  A unique nameplate design on a card that's certainly not hampered by a brilliant horizontal photographic display of Vlad's powerful follow-through.  Easily the most appealing Guerrero card I came across all day. 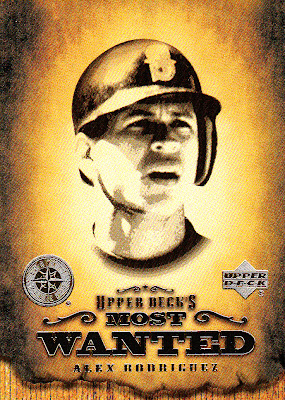 I found a healthy deposit of these Upper Deck 2000 "Most Wanted" inserts in one dime box and plucked as many different players as I could.  This is my runaway choice for coolest "new to me" insert from Sunday's show. 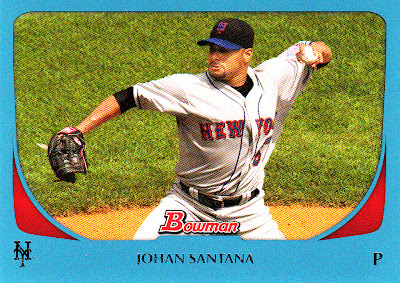 Finding parallels a plenty of Johan Santana was a cinch.  Blue, gold, sparkly, shiny, green, silver -- you name it, I found it.  And I bought it.  The 2011 edition of Bowman won't win any beauty pageants, but if they did the whole set in blue it would be a definite upgrade.  Then again, I'm easily impressed by blue parallels in general, as you might know by now. 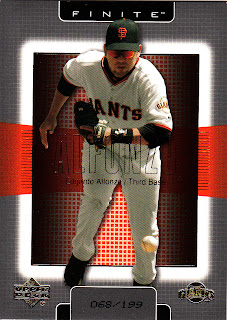 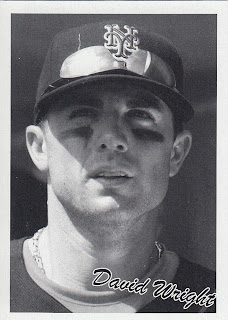 A serial-numbered Edgardo Alfonzo card is a big deal in the realm of this collector.  Ditto for any short prints of Mr. Met, David Wright.  This black-and-white portrait comes from 2008's UD Goudey set.  Primo! 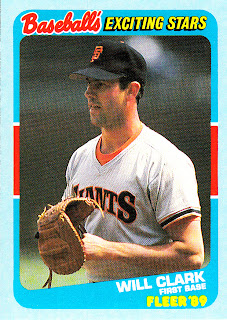 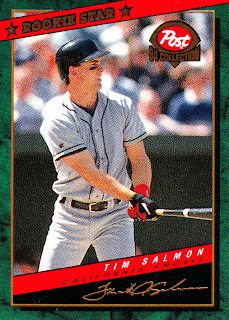 Oddballs?  Yes, found plenty of those, too.  These two came from a penny box.  The minimum purchase amount from this box was listed at $1. I had a pretty easy time amassing 100 cards. 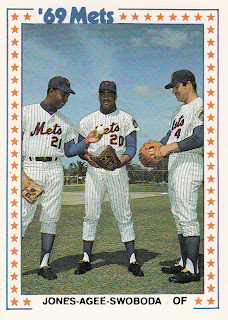 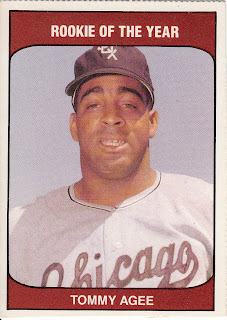 These two oddballs cost me a sum total of two cents.  The late Tommy Agree was the 1966 A.L. Rookie of the Year for the White Sox before he became a World Series hero for the Amazin' Mets of 1969.

And now, my three faves from the show, all in horizontal form... 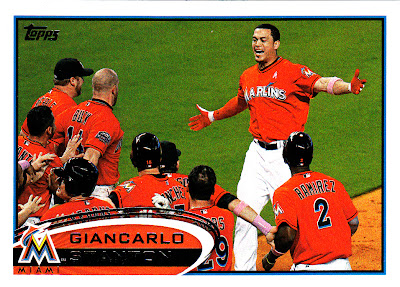 Yeah, I know I already own a copy of this card and it's only a 2012 Update base card.  But I might consider this my favorite photo from the '12 baseball card season.  Picking this up for a penny was a no-brainer. 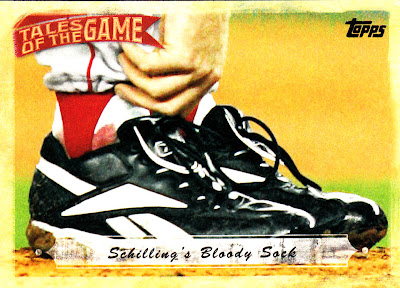 I had no idea this card existed.  Maybe I've been living under a rock, I don't know.  But when I saw it, I knew this one had to be mine.  This is by far the best baseball card that doesn't feature anything from the ankle up. 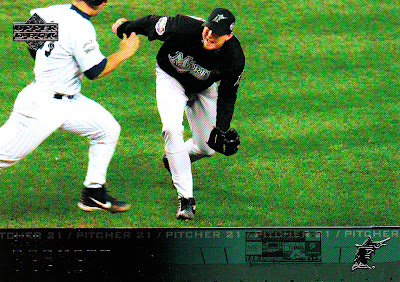 How many guys can say that their regular ol' base card contains a picture of the final out of the World Series?  I became a Josh Beckett fan for life after his series-clinching performance in the 2003 Fall Classic.  A totally jaw-dropping, amazing baseball card.  Unless you're a Yankees fan, I guess.

Wellp, I'm certainly glad these fire hall shows happen but once a month.  I'd be afraid of the consequences with anything more.  With 2013 Heritage right around the corner, and a 2013 Wal-Mart blue project very much in play, I guess I could have exercised a bit more restraint on multiple fronts.  But, what fun is that?  Besides, it's only dimes and pennies we're talking about, so it can't be that harmful, right?