At last, we have reached the midway point of our jaunt through the top dozen cards of the 2012 Heritage release. Six cards down, six to go... 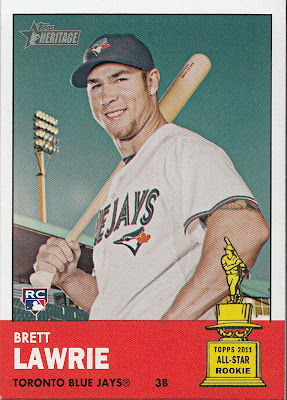 I know, I know.  Back-to-back maple leafs in the countdown is weirding me out, too.  But, I just had to choose one of the All-Star Rookie cards because they are all so darn attractive.  [Ed. Note: Oh how I pine for Topps to resurrect that old-school trophy in place of the forever-shrinking Rookie Cup.]

And this was my favorite of the bunch, hands down.

This actually was the first of the "trophy" cards I received in the course of building this set.  At the time, I didn't know I was even going to build this darn thing.  In fact, it hadn't even crossed my mind.  But, Mrs. K -- with the help of the Easter Bunny -- put a blaster of 2012 Heritage in my basket last year, and I caught the bug thereafter. And this very Lawrie card was in one of the very first packs I opened.

What's that?  Yes, I still get an Easter basket.

Anyways, I really fell for this card the moment I saw it.  Sure there's the sentimental attachment, as I'm reminded of Easter 2012 every time I see Brett Lawrie's toothy grin and the hint of his manly bicep tattoo.

Beyond that, however, this is a pretty freakin' great card all by itself.  It's got the right stuff in terms of a classic ballplayer pose; some almost surreal background elements (I don't think I've ever seen the sky look that rich and blue); and let's be honest, the Jays' outfits are quite appealing to the eye.  Photoshopped or not.

Plus, I think the upward angle at which this photo is taken makes Lawrie appear almost heroic, larger-than-life in a way.  As if he'll climb to the top of the stadium's light stanchion to rescue a nest of baby birds as soon as the photo shoot concludes.