This 'n That (Super Sunday Edition) 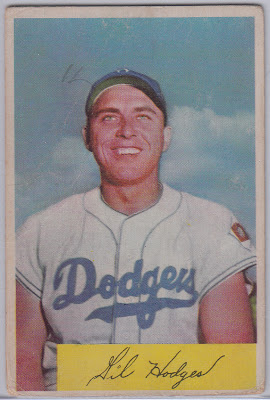 Happy Super Sunday, folks!  Before I begin talking baseball cards, I suppose I'll give my obligatory pick for today's big game.  Let me preface this slice of prognostication by stating that I've picked against Baltimore every playoff round thus far.  The Colts, Broncos and Patriots each let me down.  Not that I hate the Ravens, but I'm kinda over Ray Lewis and his whole legacy.  Anyways, choosing against the purple team hasn't turned me into a genius over the last month.  It is that spirit, then, that I am picking the Ravens to beat the Niners later on this evening.  If I'm wrong, I'd be O.K. with that.

But, enough of the pigskin talk.  The above 1954 Bowman card of the great Gil Hodges is the genuine article.  A little worn and a little wrinkly -- and I think that's a pencil mark near his cap -- but this also came home with me from yesterday's mall show.

The same dealer who sold me the Ted Williams card had a $2 box full of odds and ends.  Jersey cards, autos, short prints, vintage, etc.  When I first saw this, I noticed it was marked $8.  In fact, most of the cards in the box were marked higher than the two-buck threshold.  I asked the guy just to make sure and he assured me they were all two.  My next thought was that this was some sort of reprint (God knows we have enough of those floating around to choke a horse).  Alas, it is not!  The end result was a no-brainer purchase.

This beauty is now the oldest card in my collection.  Also, that marks two straight card shows in which I've purchased a vintage Hodges card.  That's a trend I can live with!

Also at this two-dollar box, I snagged a pair of Hall of Famerski's: 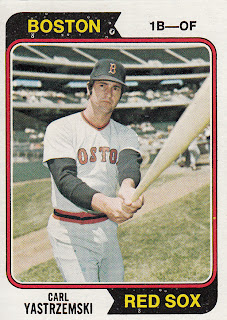 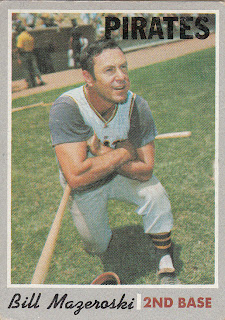 I love both of these photos.  Especially the '70 Maz.  It looks like he was caught in a moment of candid conversation while waiting to get into the batting cage.

There were lots of autos in this two-buck box, but nothing that really moved me to tears.  I did, however, find a nice on-card auto from a young Mets outfielder: 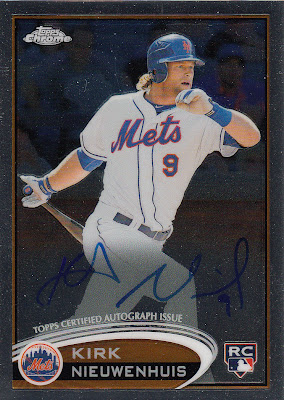 I've always wanted one of these Chrome autograph cards.  I think two dollars is an appropriate price to pay for something like this.  I don't expect Captain Kirk to be a future All-Star or anything, but he's a good defender and showed flashes of clutch capability at the plate in 2012.

I also got a Ryan Fitzpatrick jersey card from this box, but I'll spare you the scan.  It's a nice card, and I like it plenty, but Buffalo Bills quarterbacks -- especially those that are perhaps on their way out the door -- aren't trending in anyone's world these days.

Another dealer -- a regular at all the area shows I attend -- had a quarter box of commons from the 1970s. Something like that is definitely worth a thorough searching. 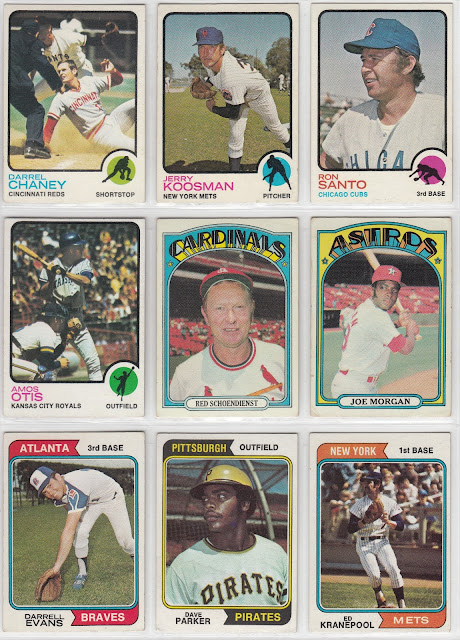 I was very happy to find a big run of 1973's.  I was able to find quite a few of the Mets from this set, as well as some more amazing photography, including the following: 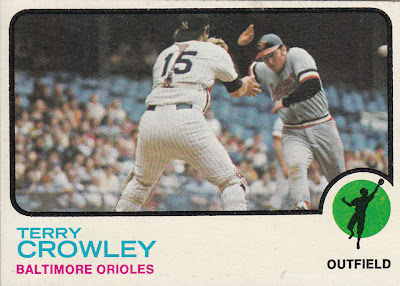 I've never come across this card either in person or via the blog circuit.  Totally awesome!  Was '73 Topps way ahead of its time or what?!

And, for a quarter, I think this next one might've been my favorite pull from the box: 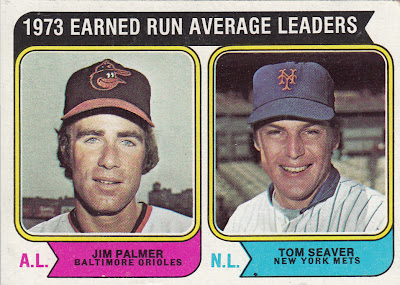 Usually I'm bored by League Leader cards, but does it get any better than this pitching duo?  Palmer looks positively far-out and spacey, while Seaver looks like he was quelling a case of the giggles.  Brilliant!

The dime boxes at the show were berry, berry good to me.  I was able to find some cards towards my unfinished 2012 Topps insert sets; the 2011 Heritage base set (including an SP!); my 2011 Cognac quest; and -- of course --  my various player collections.

Thanks to these ten-cent boxes, I was also able to score some cool cards of Hall of Famers: 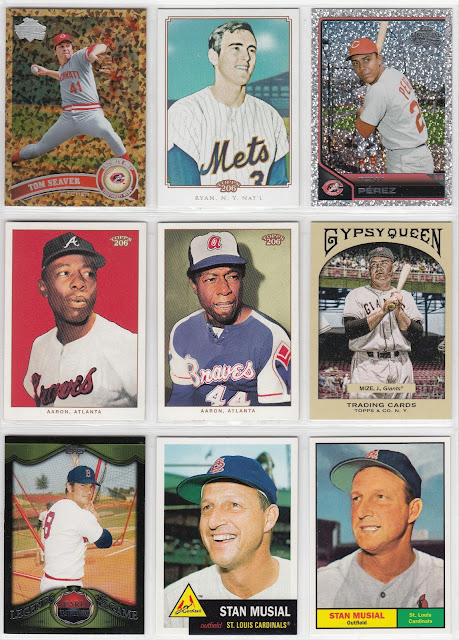 Can't really beat a Cognac Seaver for a dime, can you?  Ditto for the sparkly Perez.  The Aaron cards are apparently variations from the 206 set (I think).  Regardless, I really dig 'em both!

Dime boxes also a great sources for really neat cards that don't necessarily have a spot in your collection, but you really can't pass up.  And, for ten cents, you don't have to! 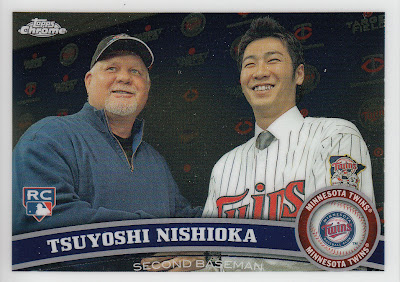 I remember coming across this card in my pre-bloggin days and thinking, "Man this is a pretty neat card, but what am I gonna do with it?"  But these days, that nagging thought doesn't deter me.  For a dime, I can easily catalog it with the rest of my Twins cards.  Or, at the very least, put it away for a rainy day trade. 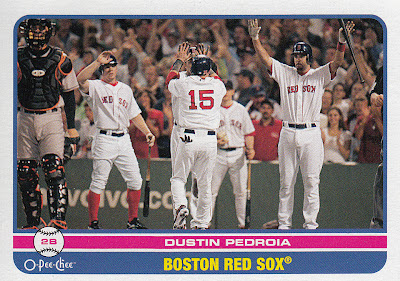 Pedroia isn't a guy I collect, really, but I couldn't say no to this card.  The 2009 O-Pee-Chee set doesn't normally feature a whole lot of 'busy' photography like this, does it?  If it does, I haven't come across it much.

Finally, I really have no clue what do do with these or what to make of them, but I mean...c'mon: 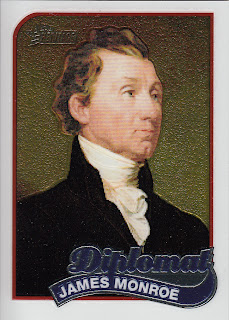 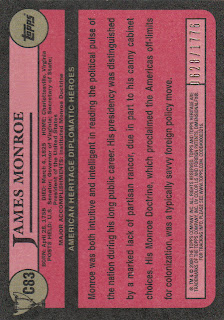 James Monroe has never looked so good as does on a 1989 Topps border.  I grew up playing Little League ball at a facility known as James Monroe Park.  And I love '89 Topps more so than any other Topps design.  So it's only appropriate that this card has found a way to cross my path. 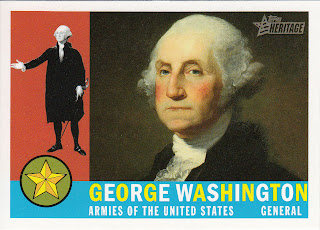 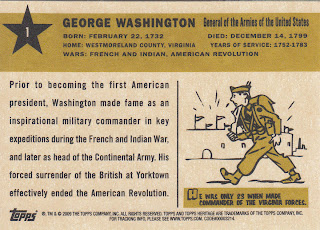 And here we have General Washington, the father of our great nation.  Gotta love how George's mug looks so natural on a 1960 Topps card.  Man, I know I didn't really follow the new card releases back in 2009 as fervently as I do now, but I really must've had my head in the sand to miss these things.

In any event, I wound up pulling over 120 cards from one seller's dime box.  Lots of chromes and parallels and even some oddballs.  In my next post, I hope to share my top ten favorite dime box pulls from the show.

Until then, enjoy the Super Bowl everybody!