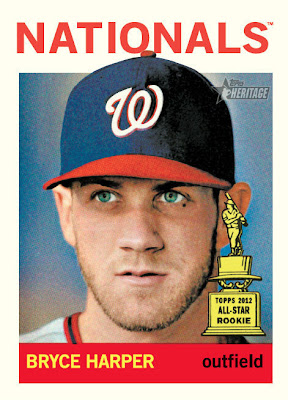 I hate to put a bitter taste on my tongue with the glorious 2013 Heritage set about the hit the shelves in a matter of days, but...

During my lunch break today, I was scoping out the checklist for this year's product and became unbelievably grumpy when I saw the 75-card short print checklist.  It basically reads like an All-Star roster.  Miguel Cabrera, Andrew McCutchen, Evan Longoria, Giancarlo Stanton, Felix Hernandez, Matt Kemp, Roy Halladay, Albert Pujols, Mariano Rivera, Ryan Braun, Stephen Stasburg, Buster Posey, Jose Reyes, and Justin Verlander are just a sampling of the star-power that has been 'relegated' to SP status.  Oh, and I didn't even mention my guy, David Wright, who once again has been designated as a short print.  That's at least three straight years.  Pretty annoying.

And, yes, the two Rookie of the Year superstars plus Yoenis Cespedes are among the SP names, too.  So, don't expect to come by the above Bryce Harper card or Mike Trout easily in your pack ripping.

Hey Topps, I get it: you're gonna have some star players populate your short-print checklist.  Totally fine with that.  But, can you cut us regular guys a break occasionally?  It's insulting and petty to make a 75-card SP checklist so lopsided with fan favorites and All-Stars, while the regular 425-card roster is left as sparse as the bread aisle the day before a nor'eater hits.

I've been a good soldier for Topps, buying up their products without second thought.  I even put on a happy face with the $100 High Numbers set last year.  But, when completing a set is only convenient for dealers who buy cases of product, where's the fun?

Like I said, the last thing I want to do is [tinkle] and moan when my favorite card series is about to arrive, but the jerks at Topps sure make it a test of patience, don't they?