And away we go with another edition of lovable, huggable Four Topps!  I guess Random.org was getting antsy, because the site responsible for generating the card number for this feature pulled out the TaylorMade driver for this one.  As you can deduce from the image above, we get to dissect card no. 590 for today's experiment.  And, if you know the history of Topps cards, you know that the card numbers ending in a zero are reserved for the guys who drive Cadillacs.


Before he became a cancer in the Mets clubhouse in the early '90s, Vice Coleman was emblematic of Whitey Herzog's Runnin' Redbirds teams of the '80s.  They don't make base stealers like Vince or Rickey anymore, that's for sure.  Topps kept it simple for VC's 1987 card, but it's still got a cool vibe to it.  Hey, Stat Man: Coleman topped 100 steals for a second straight season in '86 with 107

While card no. 590 represented elite speed in 1987, it was all about brute strength in '88.  He was sometimes Jorge and other times George during the '80s, but however you spelled his first name, Bell was a bad man with the bat.  This card might receive a slight point deduction for the mesh BP jersey, but he gets double points back for the "one batting glove" look.  And don't even get me started on that sick Jheri curl.  Hey, Stat Man:  Bell terrorized the AL in 1987, racking up 47 home runs and 134 RBIs en route to his first and only MVP award.

Topps kept card no. 590 north of the border in 1989, albeit in a different province.  While the Big Cat might not fully give George Bell a run for his money in the hair category, Andres sweeps the board in the overall style department.  The powder blue jersey and tri-color cap of the Expos ensemble are outstanding, as always, and a couple swipes of eye black complete the look.  And I've always been partial to Montreal's color scheme on the '89 Topps cards.  Hey, Stat Man:  Selected to his first All-Star Game and captured the Silver Slugger for the Expos in 1988. 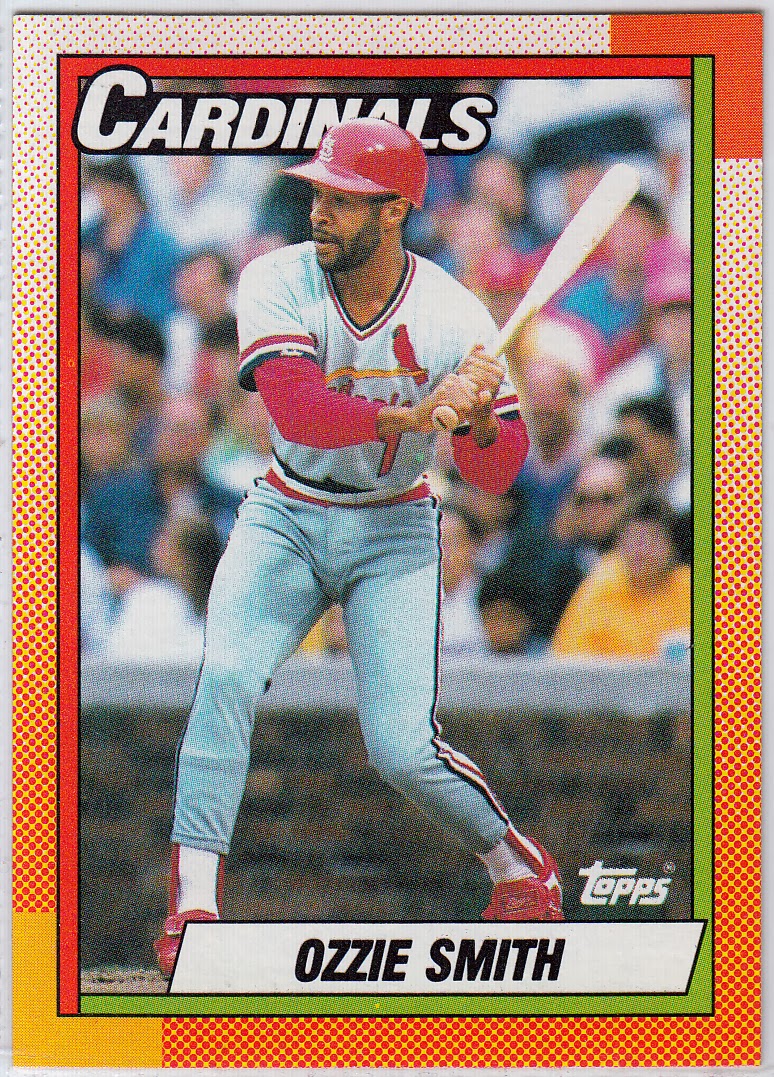 The Canadian spell was broken in 1990 thanks to a Wizard (of course!).  The second Cardinal to occupy the 590 spot in a four year span is also perhaps the most iconic of his era.  Ozzie Smith will always be remembered for his mastery of the shortstop position, but I can't help but also think about the flapless batting helmet every time I hear his name.  This card gets bonus points for the Wrigley bricks in the background.  Hey, Stat Man: Established a career high with 8 triples for the Cards in 1989.

And the Winner Is:  Boy, this is a tough call.  A great batch of cards!  My first instinct was to hand the gold medal to Ozzie, but after further consideration the bouquet goes to the '88 George Bell.  Yes, the Jheri curl played a role, but more so the man's monster '87 season was a sufficient tie-breaker.