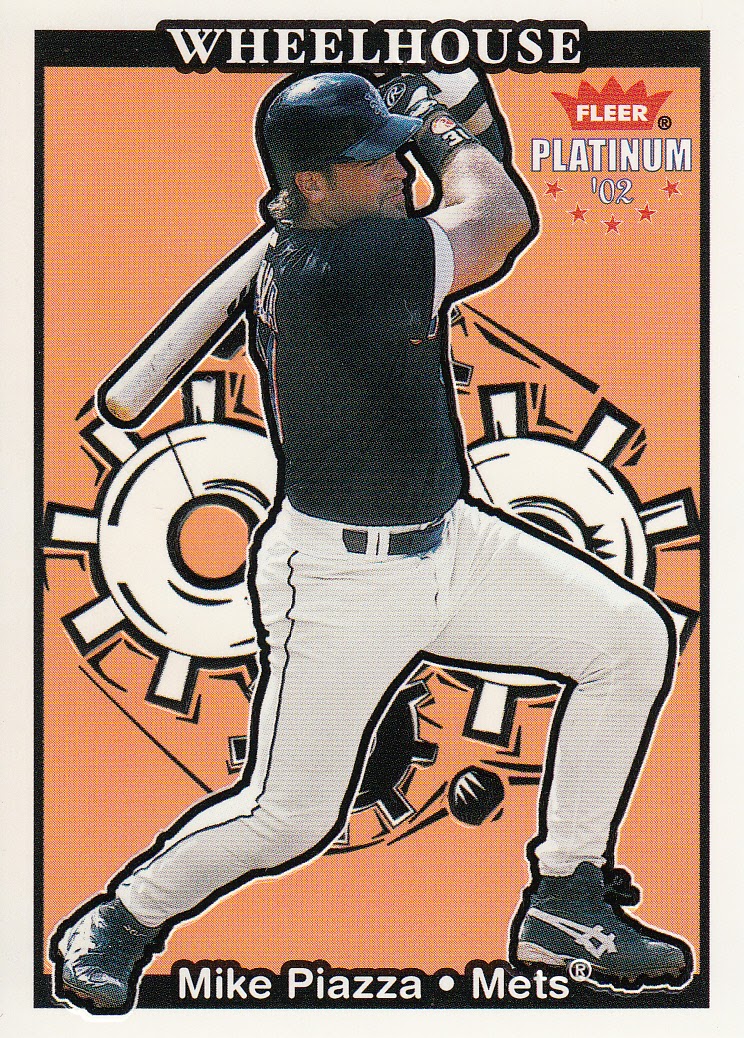 I was the recipient of a pretty amazin' package of cards recently, as my buddy Nick (of Dime Boxes fame) hooked me up as he so often does.  Nick's packages normally include a great assortment of cards for every corner of your collection.  This time around wasn't any different.

The package was definitively parsed into three sub-sections: Mets, Player Collection, and Horizontal Heroes (aka cards for my frankenset).

We'll start off with the Mets portion of the sampler, and the creative Piazza insert seen above.  There's a bottomless well of Piazza cards, isn't there?  And that is obviously a good thing! 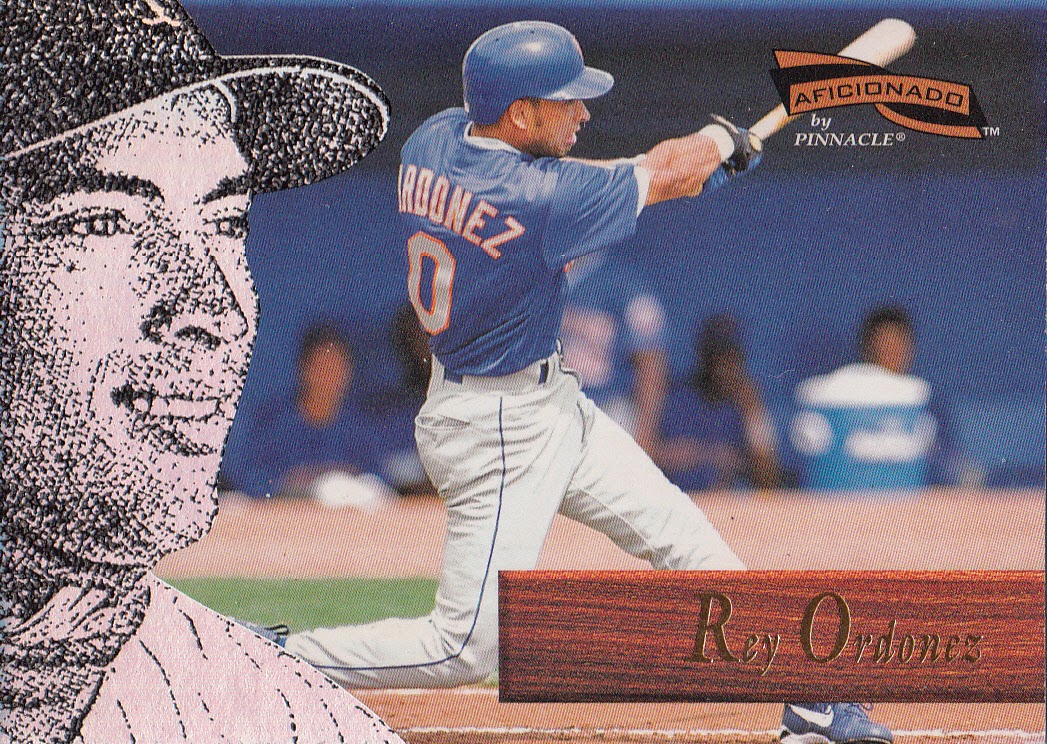 A Rey Ordonez rookie from Pinnacle's Aficionado set.  All the cards from this set are of the horizontal variety. 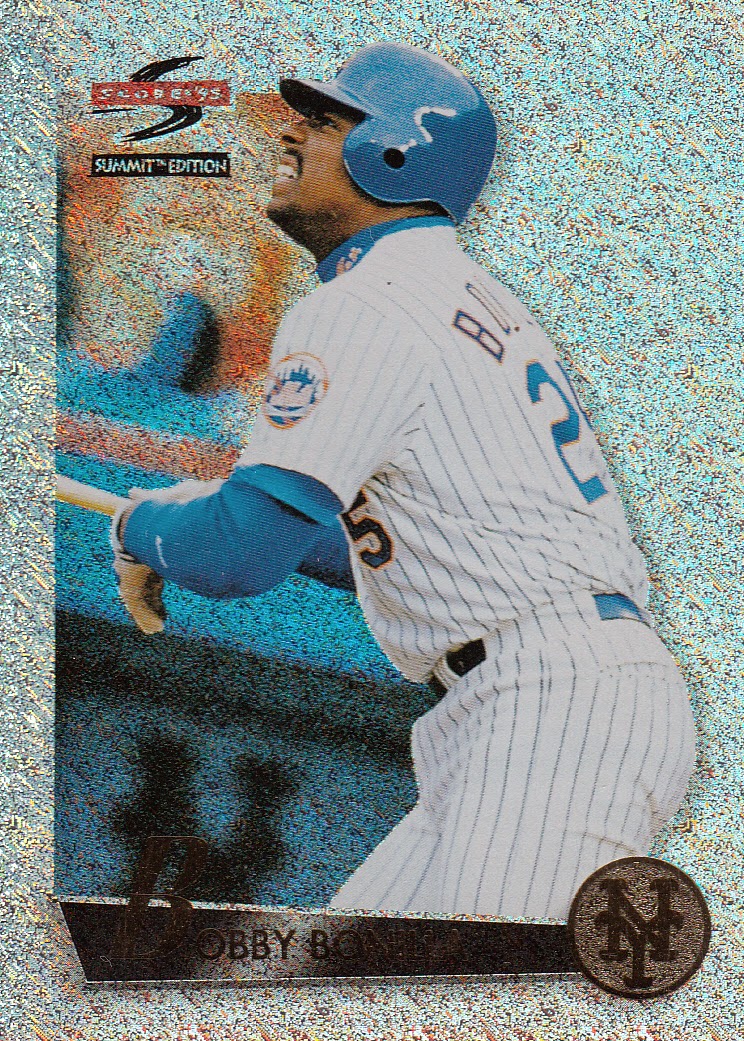 Score's 1995 Summit Edition are a pretty underrated set, I think.  This one takes it to the next level, though, as this is an Nth Degree parallel.  The scan makes it appear as though Bobby Bo is playing in a field of television static.  I assure you it's much sexier in person. 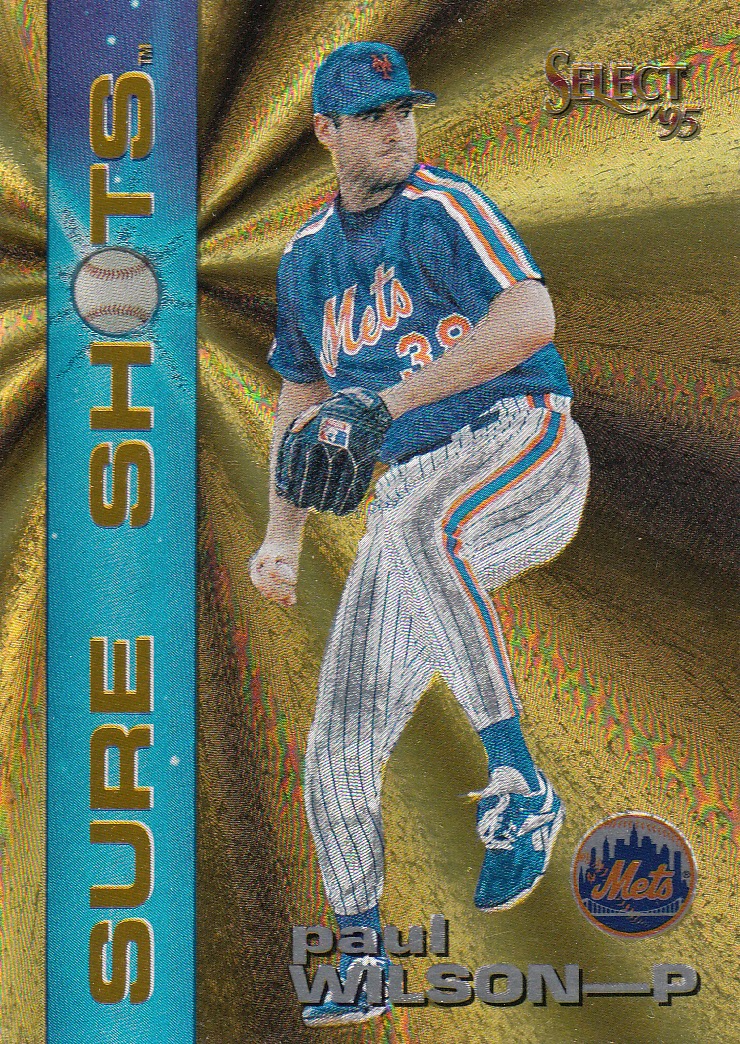 Speaking of sexy, I'm absolutely crazy about this card of Paul Wilson.  I'm not too wild about '95 Score Select, but the Sure Shots insert set is pretty damn awesome.  I don't think I've ever come across one of these before, but I'm in love.  I think former Mets prospect Terrence Long is also featured in the Sure Shots checklist, so I'll have to add that to my want list. 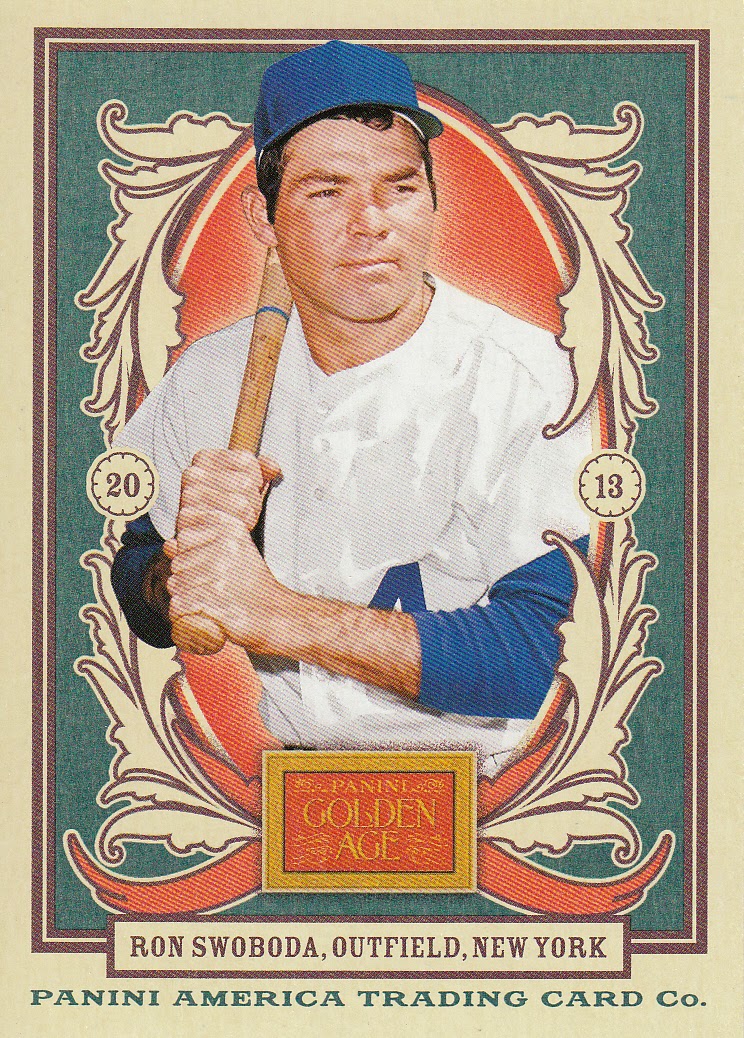 Nick recently composed a thoroughly enjoyable post about this year's Panini Golden Age.  He dissected a blaster of the stuff and I have to say I'm pretty impressed with the look of the cards as well as the player assortment.  This Swoboda card is from last year's offering, which isn't chopped liver either.  One of the heroes of the '69 Miracle Mets, it's good to see Ron getting some love. 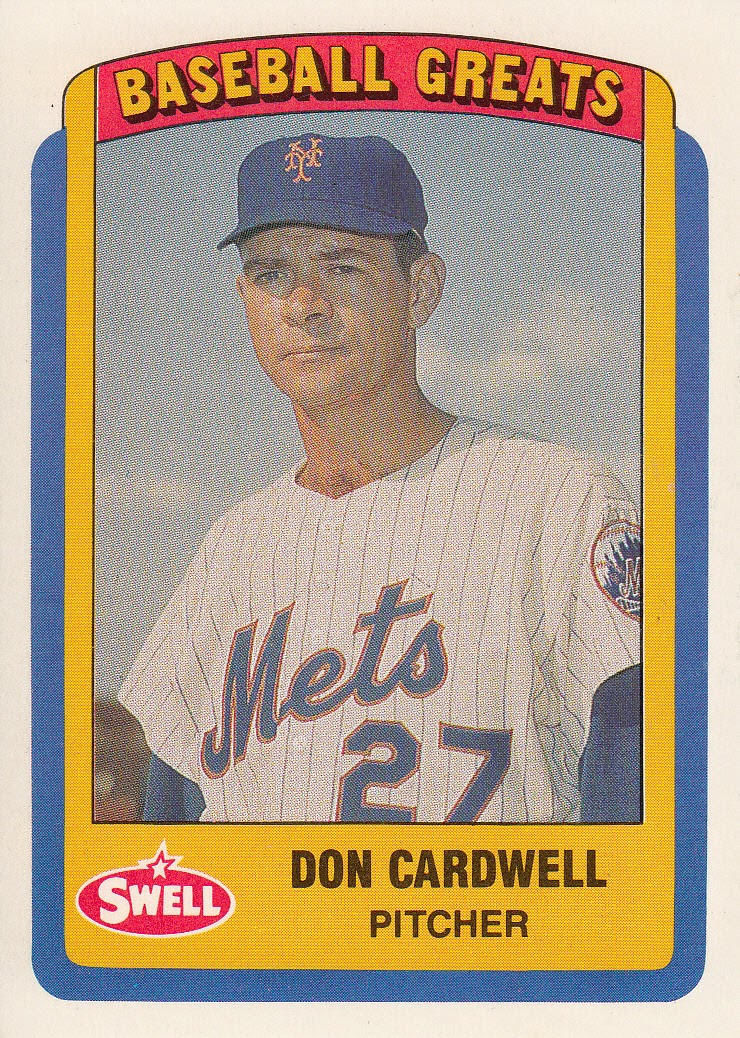 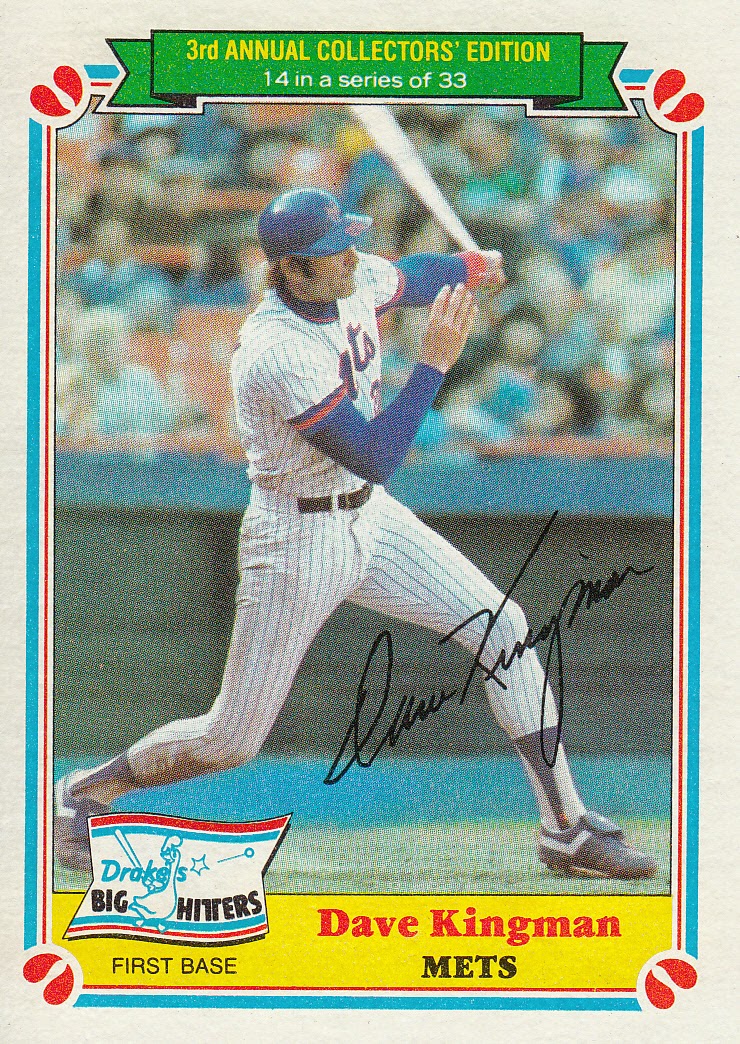 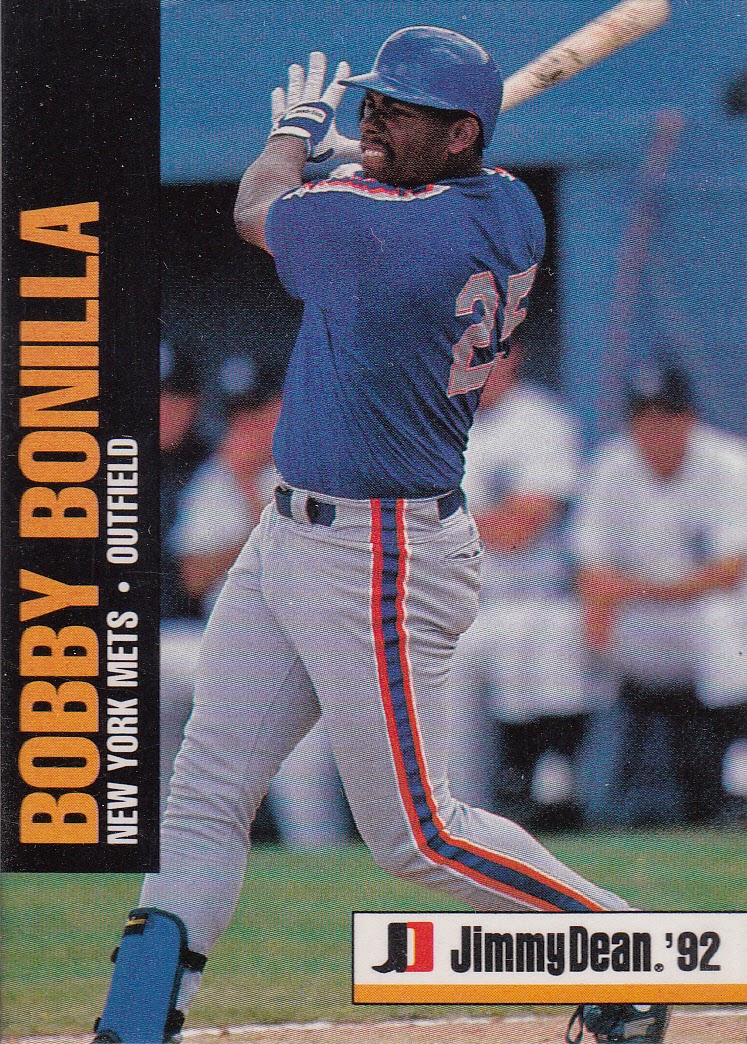 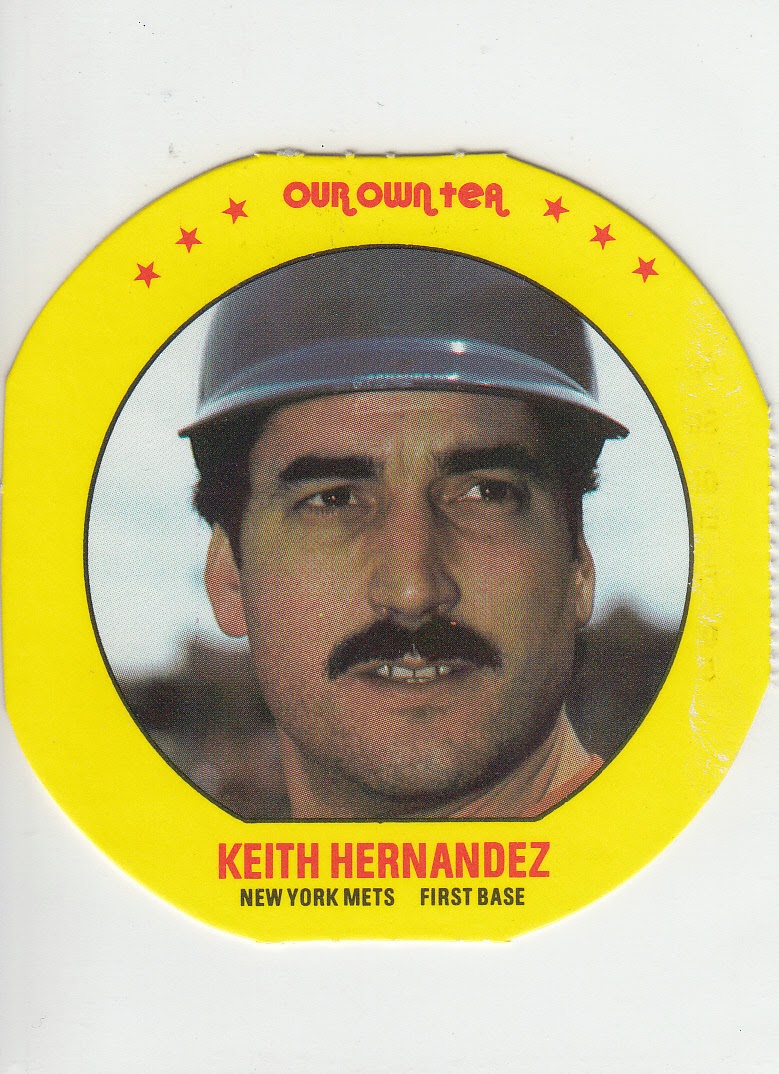 You can always count on Nick to track down a bevy of cool oddballs.  A pretty good variety here, including a great Keith Hernandez disk which prominently features the former NL MVP's dynamic 'stache. 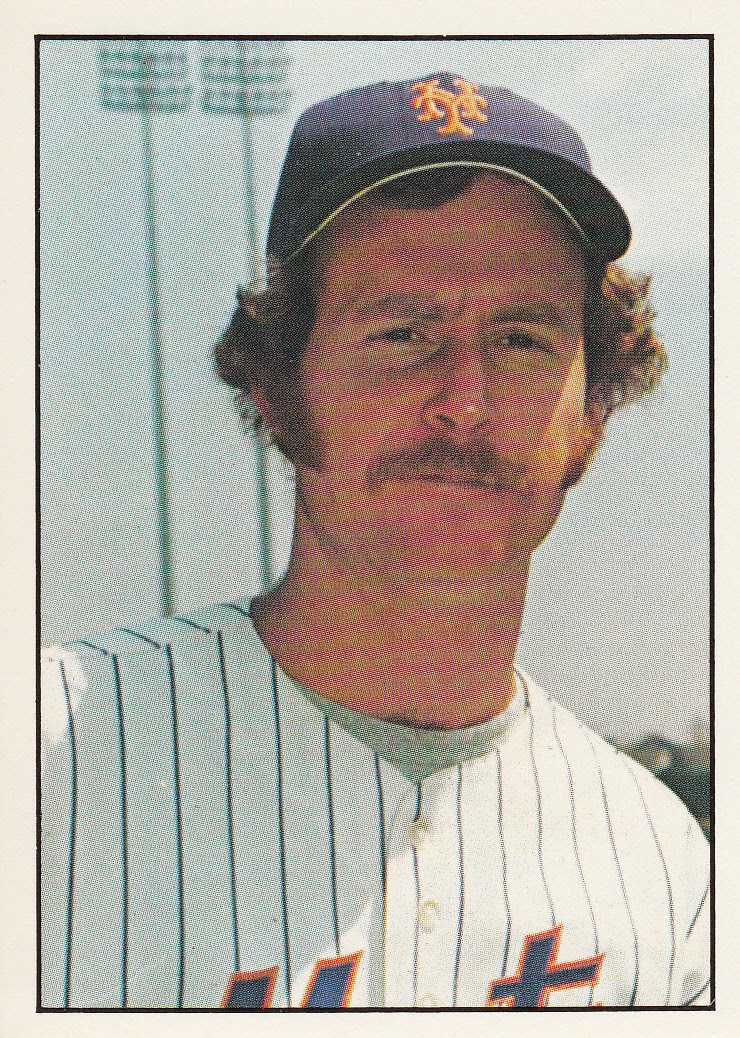 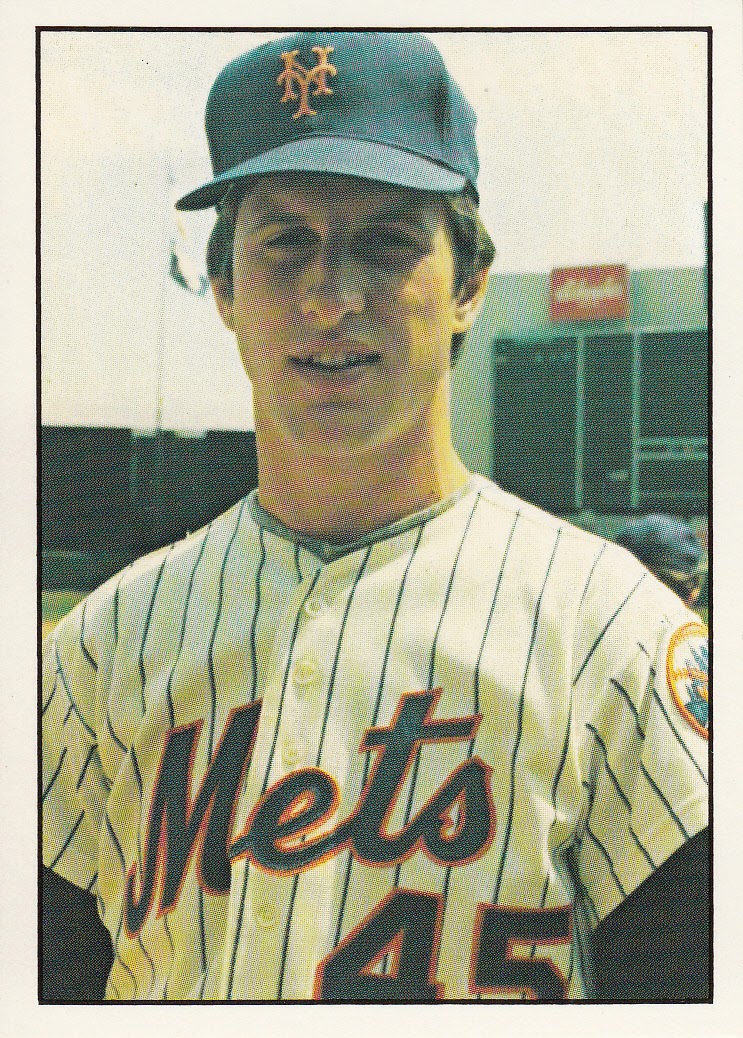 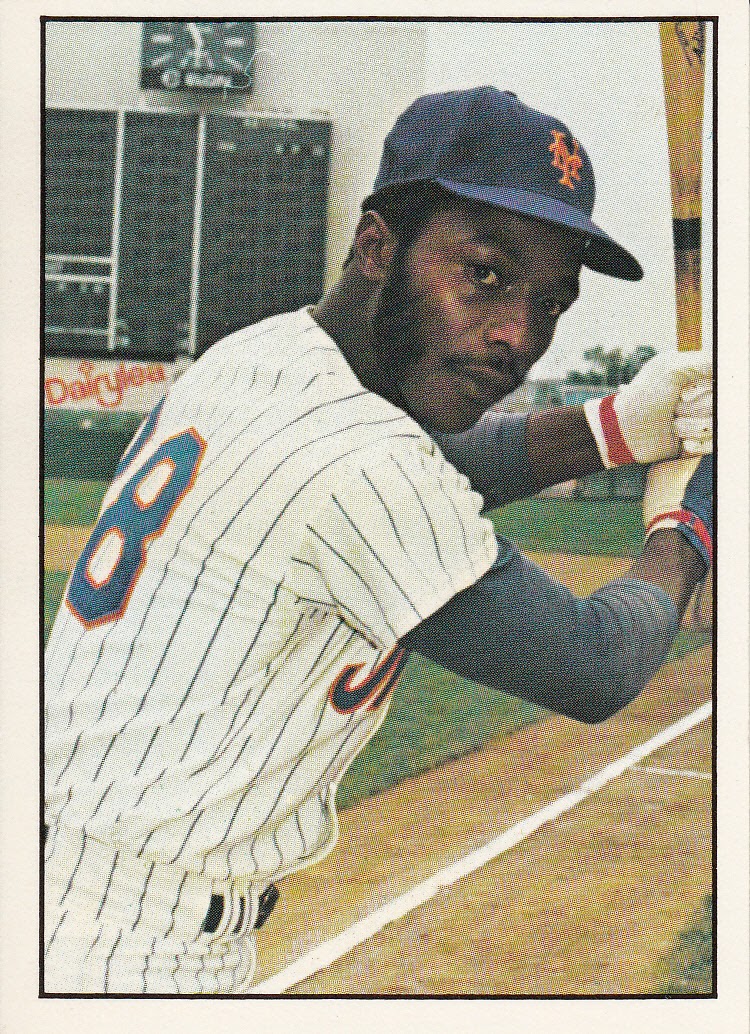 But the highlight of the Mets section of the package has to be these SSPC cards from 1975.  I don't know how he tracks 'em down, but Nick seems to find a pretty good number of these.  I've been going to shows and combing through dime boxes for over 20 years and I can't recall ever coming across these things.  Then again, maybe I did and I just wasn't interested at that particular point in time (I've come a long way as a collector, thankfully!).

Anyhow, of trio, the card on the top left represents my first of outfielder Bob Gallagher. That's one more player to cross off the All-Time Mets Project checklist!

Okay, onto the next section of the package: Player Collection. 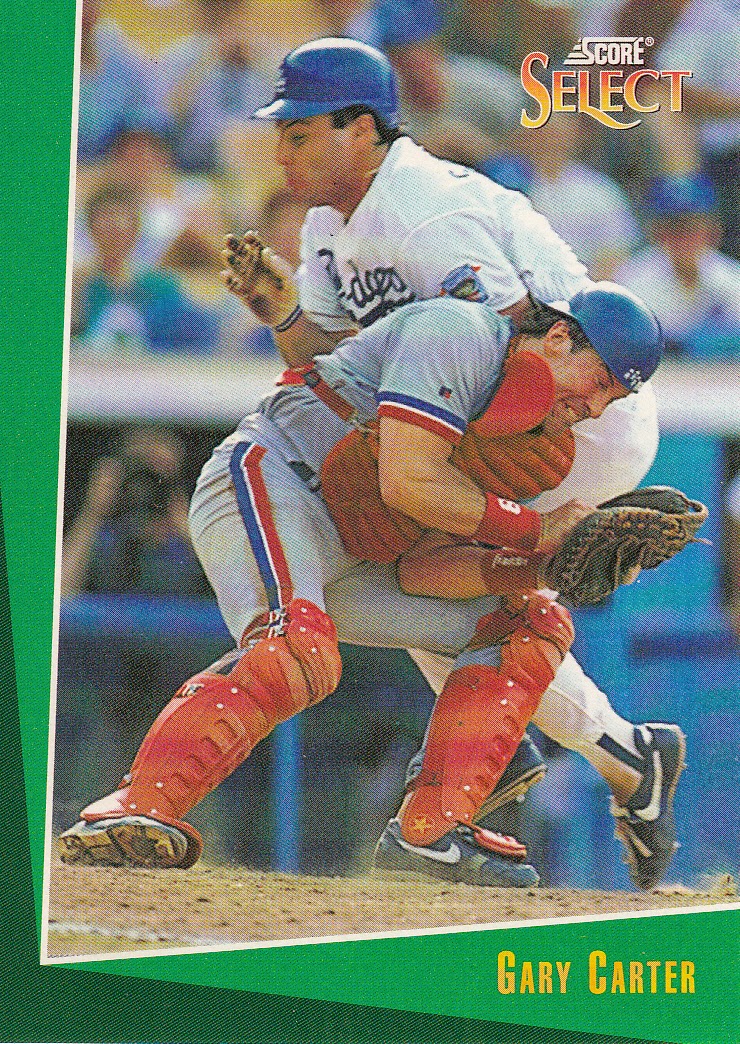 This one absolutely floored me.  Firstly, what an awesome action shot of Kid!  Secondly, how has this card managed to hide itself from me for over 20 years?!  Didn't have it and hadn't ever seen it.  Just goes to show you that the early-90s cards we all make fun of still contain untold numbers of great surprises. 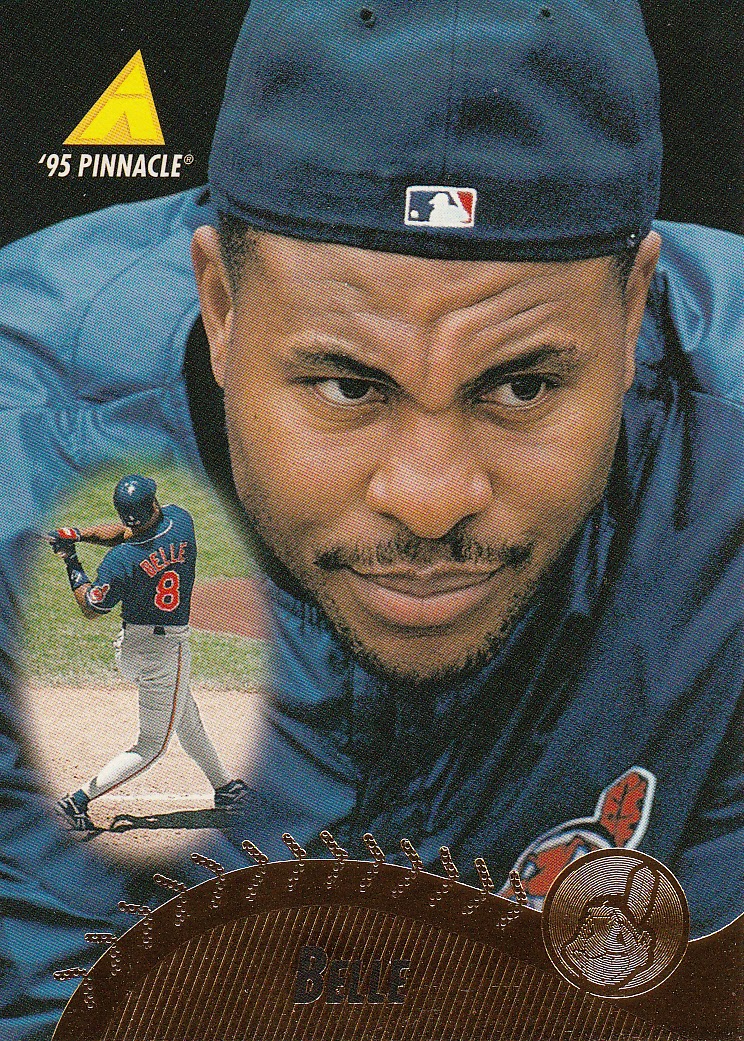 Wow, what on earth is happening on this card?  Are we seeing Albert's dream bubble?  I wonder why Pinnacle didn't just choose one photo of the other. 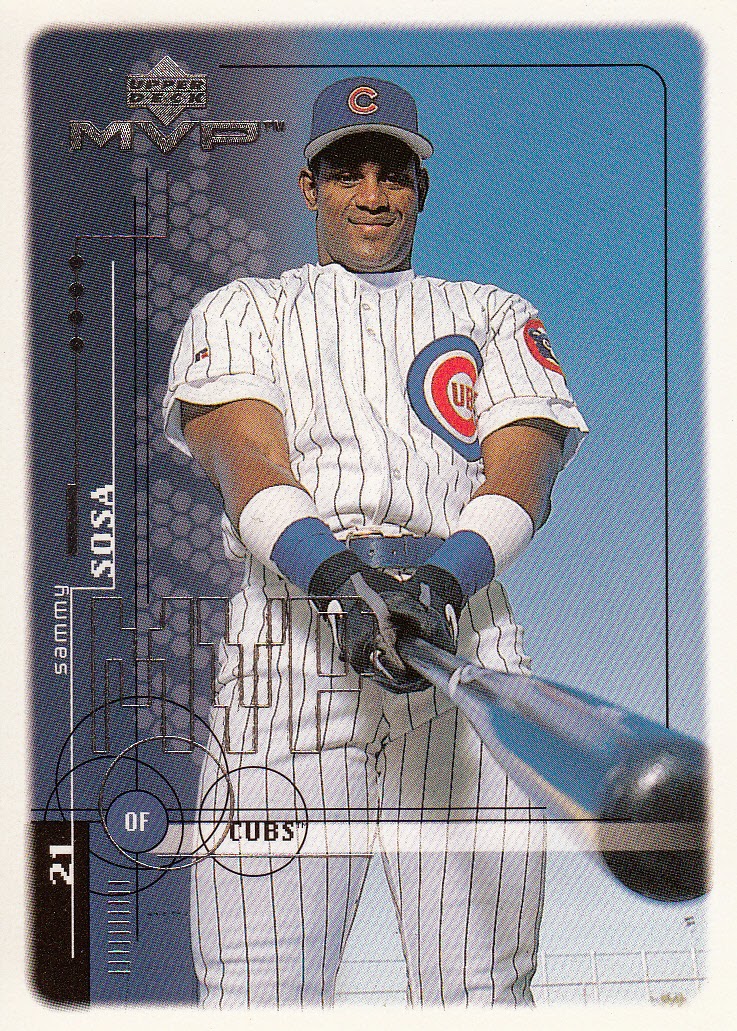 A very cool bat barrel photo of Slammin' Sammy.  I think this might be my favorite year of Upper Deck MVP, by the way. 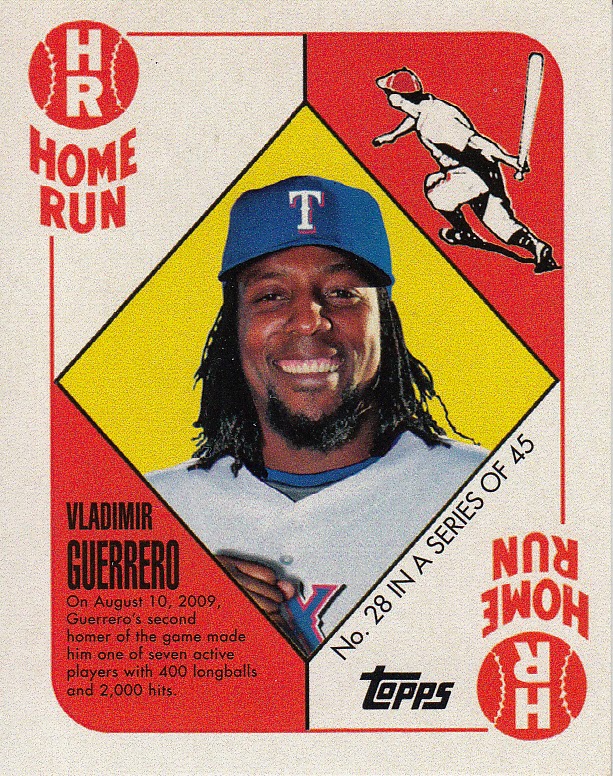 I love my Vladdy!  A fellow collector of the future Hall of Famer, Nick has really ballooned my Vlad Guerrero collection over the years.  My favorite of the handful he included was by far this Target Red Back from 2010 Topps.  I guess I didn't buy a whole lotta packs in 2010 because I never came across these retail-only inserts.  But I'd love to track down some more. 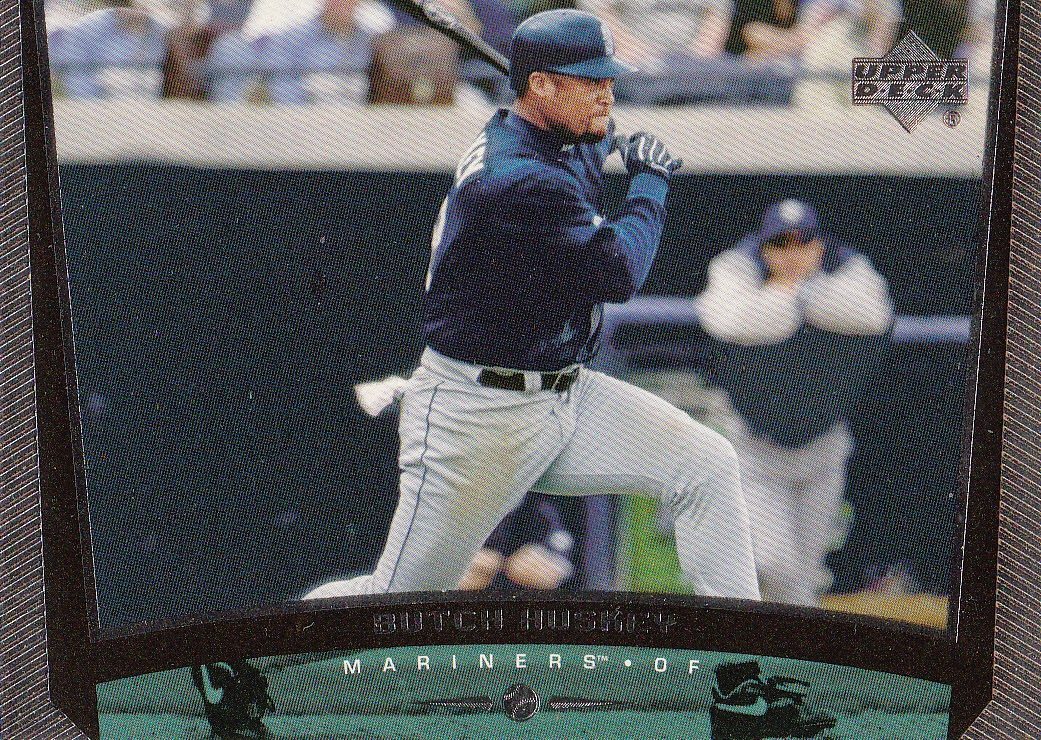 Now we're talkin'!  My main man Butch Huskey, pictured on this '99 Upper Deck card as a member of the Mariners.  It's horizontal, it's Butch, it's wonderful! 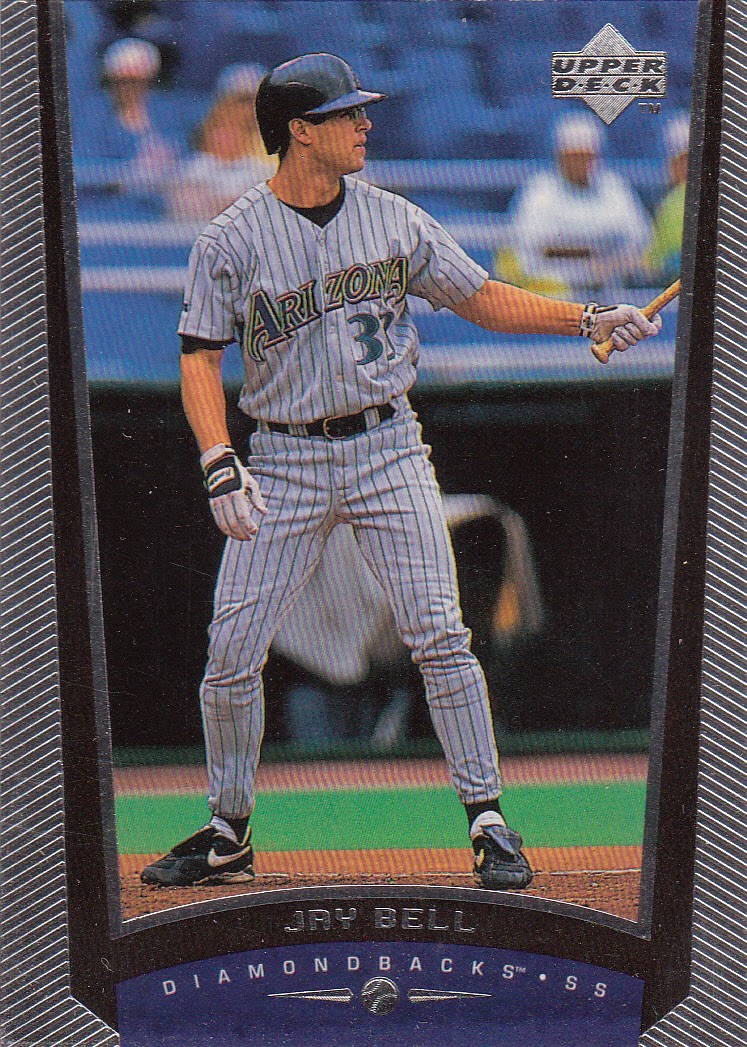 Also from '99 UD, this Jay Bell card is pretty handsome.  I kinda wish the D-Backs would go back to their original uniform.  Then again, didn't they have about a dozen official uniforms back then?  I like the pinstripes with the purple and turquoise, personally. 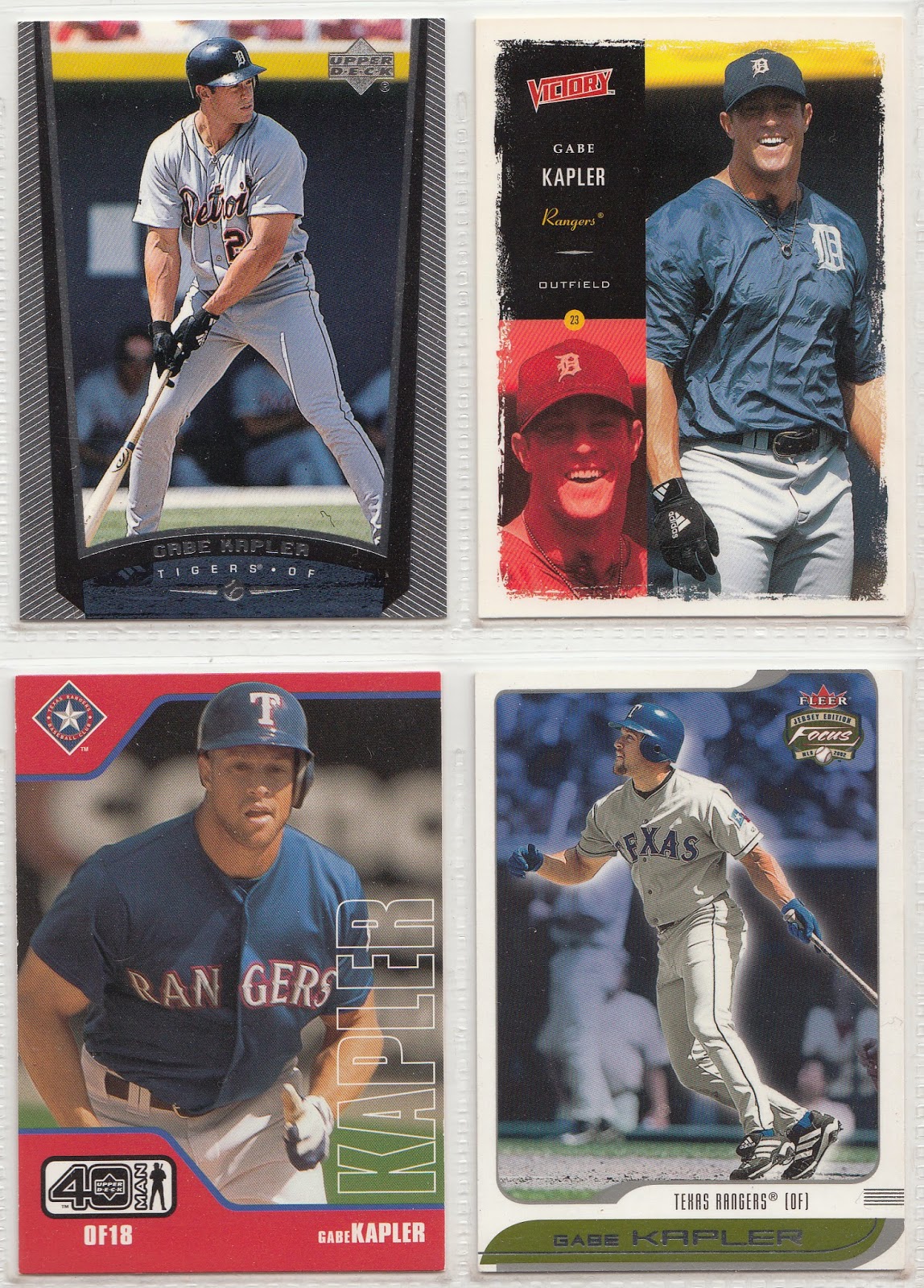 All right, some Gabes!  I guess my pursuit of Gabe or Garbiel cards (in honor of my son) has more or less morphed into a player collection for Gabe Kapler since he's the most noted of the ballplayers born with that name.  And, I'm okay with that.  Kapler is a pretty cool dude.  I even follow him on Twitter!

Okay, and now we finish with a flourish with the "Horizontal Heroes" section. 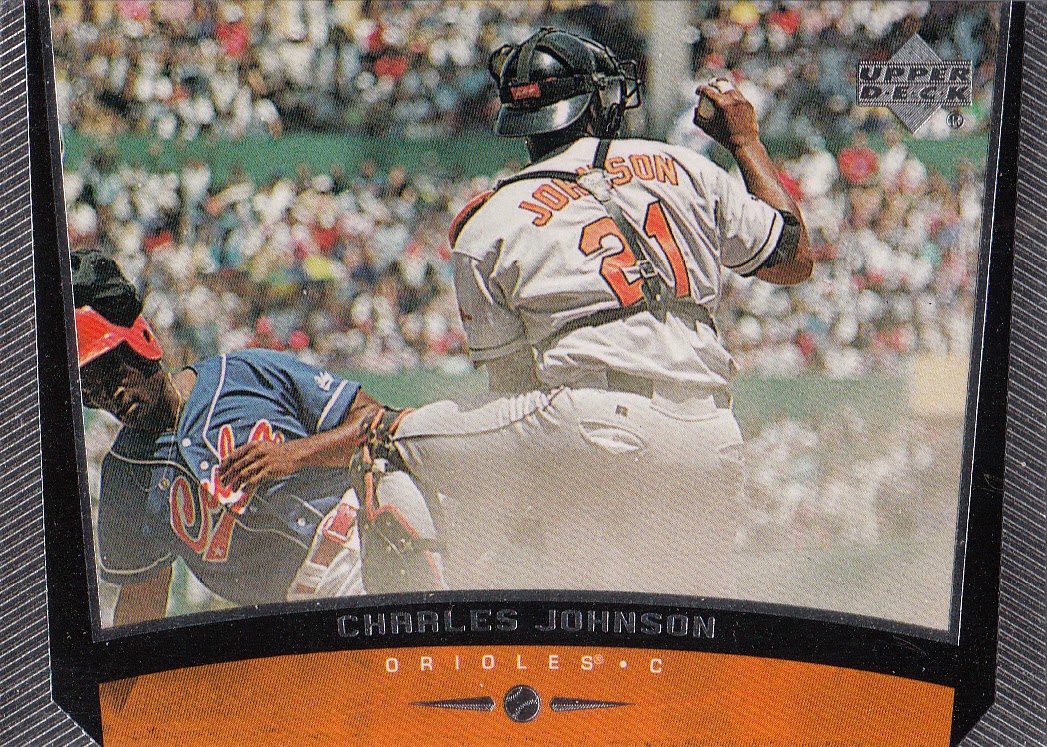 Undoubtedly a slam-dunk inclusion into the HH frankenset.  Longtime MLB backstop Charles Johnson tagging out a runner from... Team Cuba??  Yup, I had to look it up to make sure I wasn't hallucinating.  Just a tremendous card! 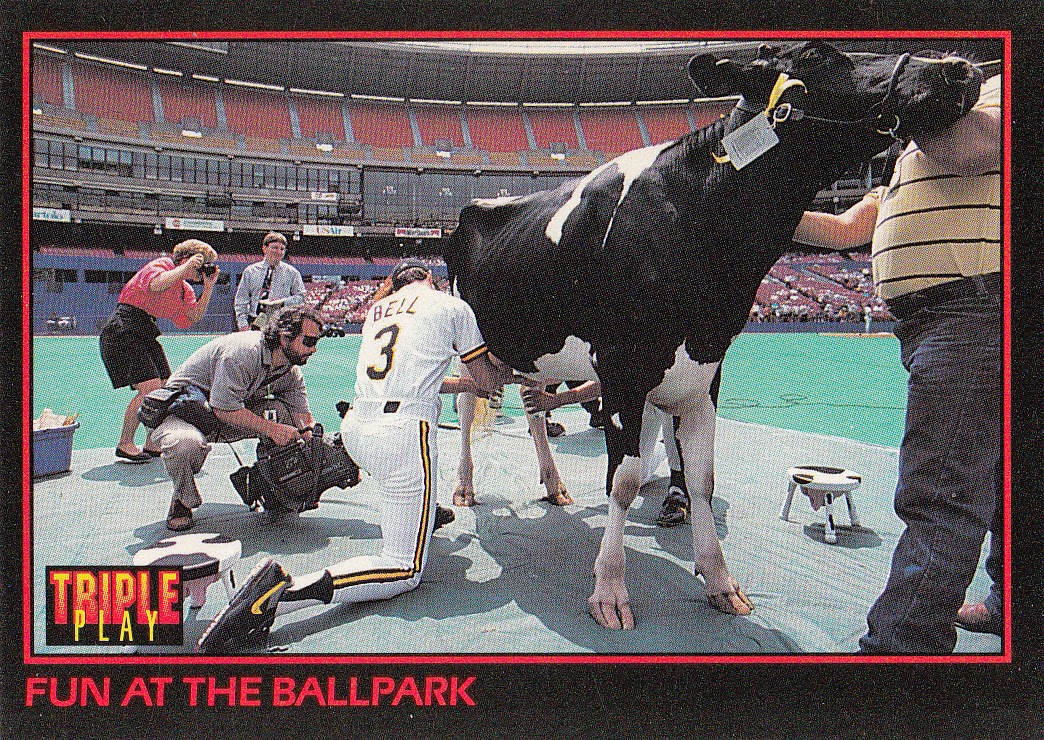 Oh. My.  This unique card will be filed into my Jay Bell collection. 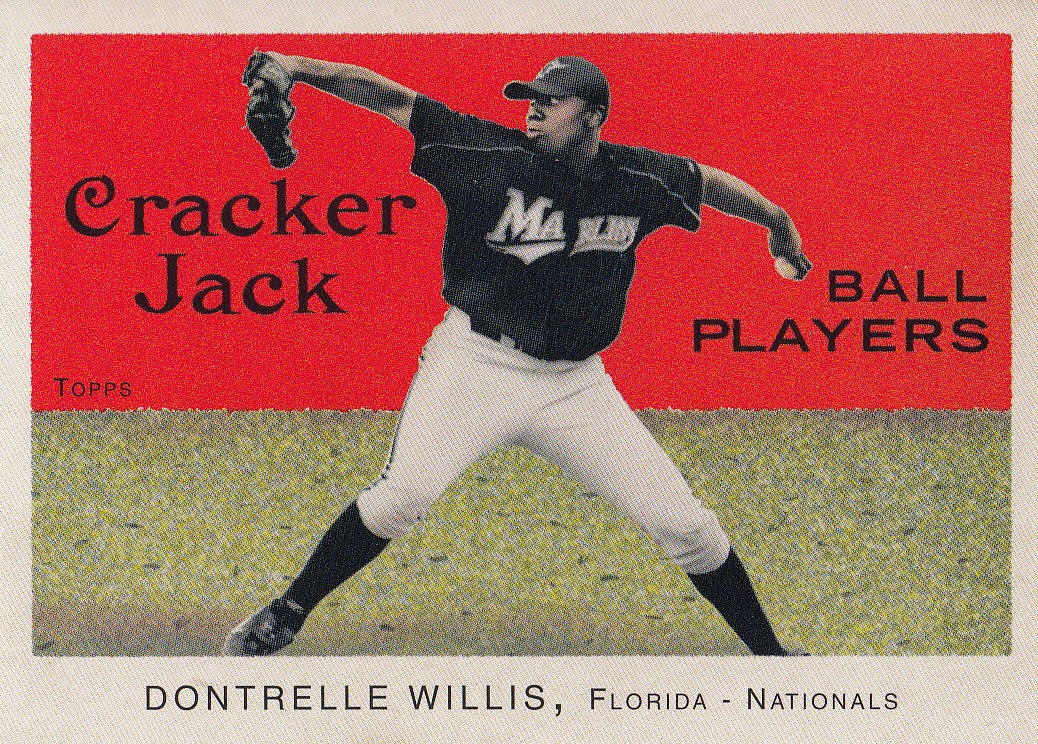 This is another one that'll be funneled into the player collection area.  The D-Train is a guy who I only casually collect, but I'd like to kick that into high gear at some point.  This one, from 2004 Topps Cracker Jack, is a fine addition. 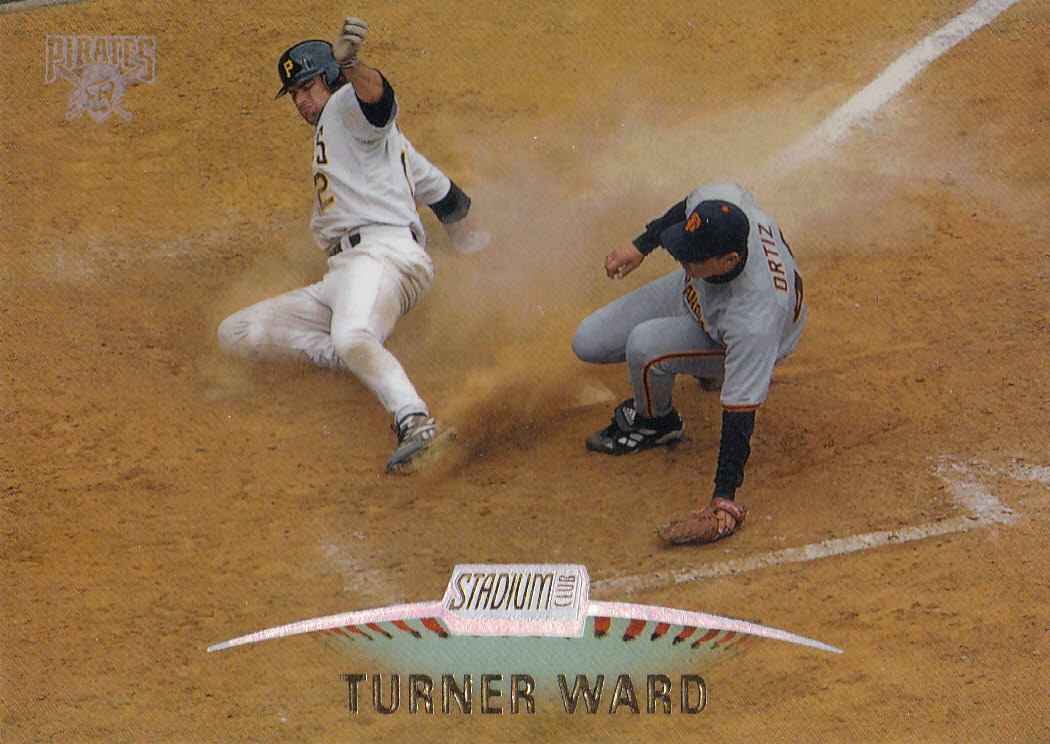 Yessiree!  Some more brilliance from Stadium Club.  You could probably put together a horizontal frankenset of all TSC cards rather easily.  There are just so many! 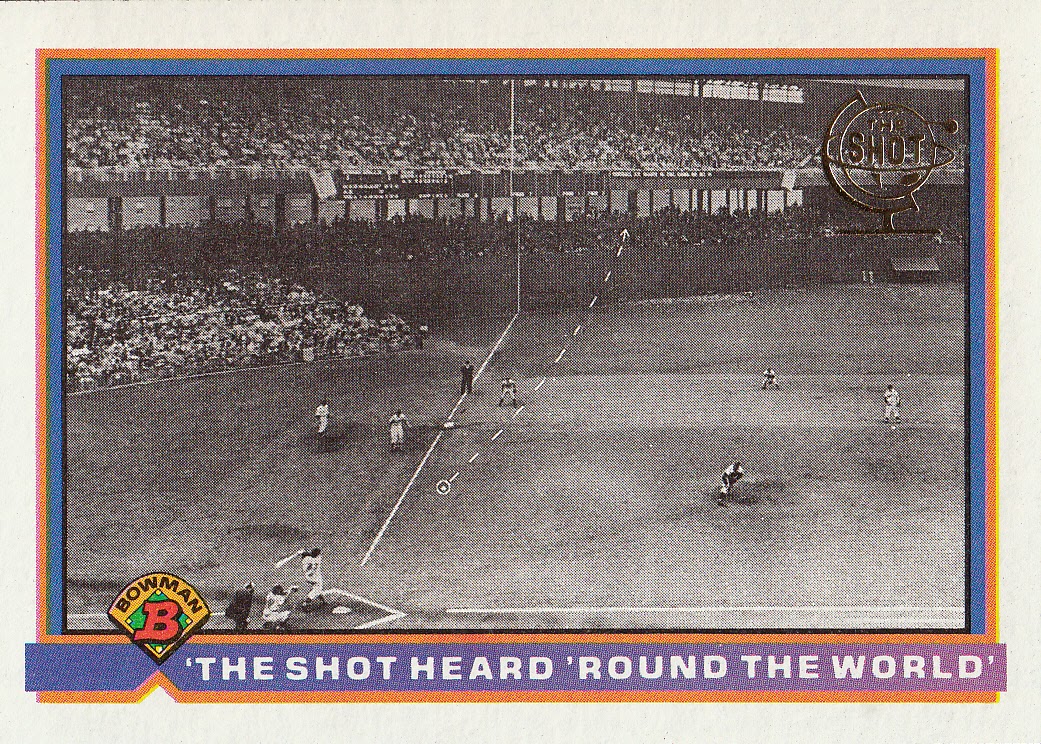 And this might be the most interesting and historical card to make the HH frankenset.  I'm proud to own this one!

As usual, you've bestowed a fun and fantastic batch of cardboard upon me, Nick.  Many thanks!