Twelve on the Horizon 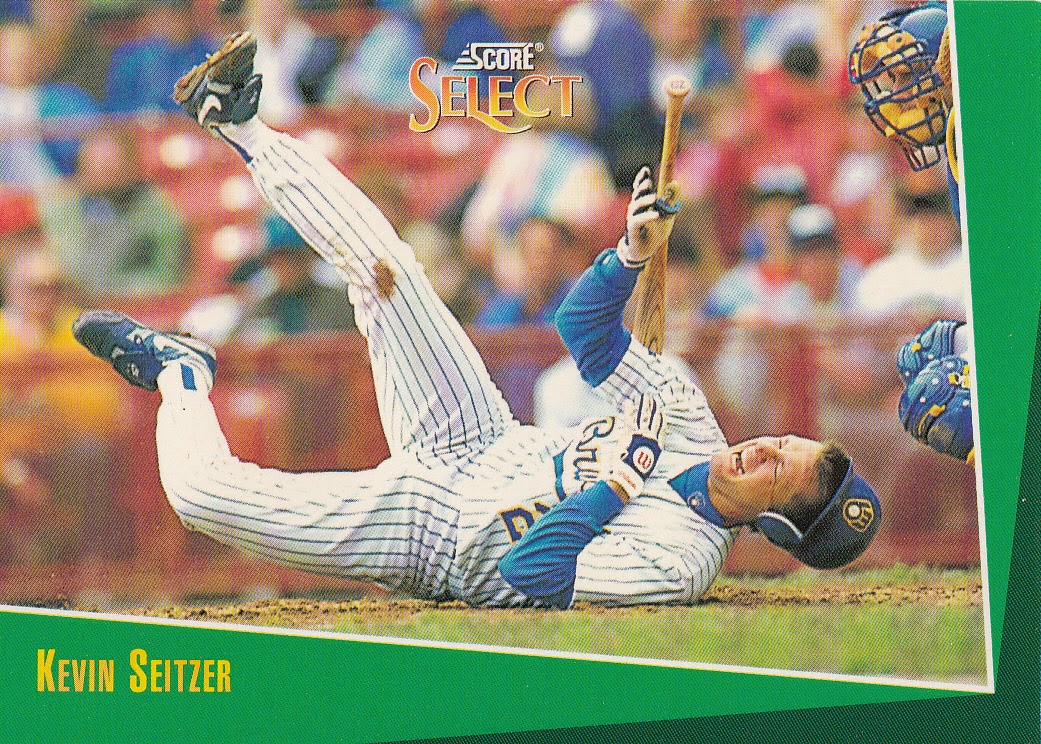 I've been sitting on (not literally, mind you) a stack of pretty cool horizontal cards that I picked up from JustCommons.com about a month or so ago.  I've been meaning to scan 'n post a bunch of them, but you know how that goes.

Anyhow, without any further blithering or blathering, here are a dozen cards from that lot that have made the cut--at least for right now--for my Horizontal Heroes frankenset.

Up top, we lead off with a 1993 Score Select Kevin Seitzer which has captured card No. 87 in the frankenset.  I don't recall '93 Select having a ton of horizontal shots, but this one has got to be one of the most interesting in the set.  If not THE most interesting.

I'm trying to be conscious of not admitting too many cards from the current decade, but that's a tough task when you consider how many photographic gems Topps has churned out.  This card gets bonus points for Chase Utley's out-of-character exuberance and also for the fact that Michael Young was a Phillie for a hot second.


There are about a zillion great horizontal cards featuring catchers in the throes of action at or around the plate.  If you're not careful, you could probably do an entire frankenset strictly comprised of such cards.  Not that that's a bad thing, but a little variety doesn't hurt.  In the case of this '96 Score McFarlane, it's too good to ignore.

Any time you can find a horizontal card of a pitcher doing something outside his accepted norm, you tend to gravitate towards it.  That's clearly the case with Rob Nen's 1995 Upper Deck issue.

Like so many other neat cards, I believe I first became aware of this one via Nick's Dime Boxes blog.  I immediately made sure to add it onto my 'want' list at Just Commons.  I think this might be one of four or five Brady Anderson cards that currently reside in the HH frankenset.  A strange coincidence, I assure you.  Then again, I don't have anything against Brady.  After all, he happens to be Mrs. K's favorite player of all-time (well, at least the one not named 'Cal').

Throwback jerseys on cards are always deserving of bonus points, especially when it comes to truly old-timey ones like the A's boasted back in 2000.  On top of that, Stairs is such a cool player to include in the set.  He looks pretty natural in that wool jersey, does he not?

Remember what I mentioned about catcher cards?  Well, I couldn't resist this one, either.  The hockey-style mask plus the fact that it's John Buck--a former Met--ensures that this one joins the fray.

I had to find a way to work a 'Gabe' card into the mix, and this one was an easy choice.  Then again, whether the name on the front was Gabe or Marty or Ezekiel, this card would have made the cut because it's such a unique photo choice.  I love how horizontal shots work on the 2010 Topps design.

A second card featuring a Phillies celebration?  I must be getting soft in my old age.  No matter the team, a card depicting a dugout welcome will almost always receive a favorable reception.

Dunston is another one of those guys that I really wanted to work into the set, and this '94 Pinnacle card fits the bill nicely.  At first glance you might be tempted to dismiss it as ordinary.  But, take a look at the placement of the baseball and where it's frozen for eternity.  Pretty cool.

A stone-cold, lead pipe lock for inclusion in the HH frankenset.  Along with Doc Gooden's '92 Stadium Club classic, this is one of those cards that will not be budged from its spot for any reason beyond ludicrous bribery.

And we'll finish on a sizzling note with this 2006 masterpiece from 2006 Upper Deck.  I don't know much about Pablo Ozuna, but judging from this action sequence, I like the way he plays the game.  And could that be loopy MLB Tonight analyst Eric Byrnes he's about to engulf?  It truly doesn't get any better than that.