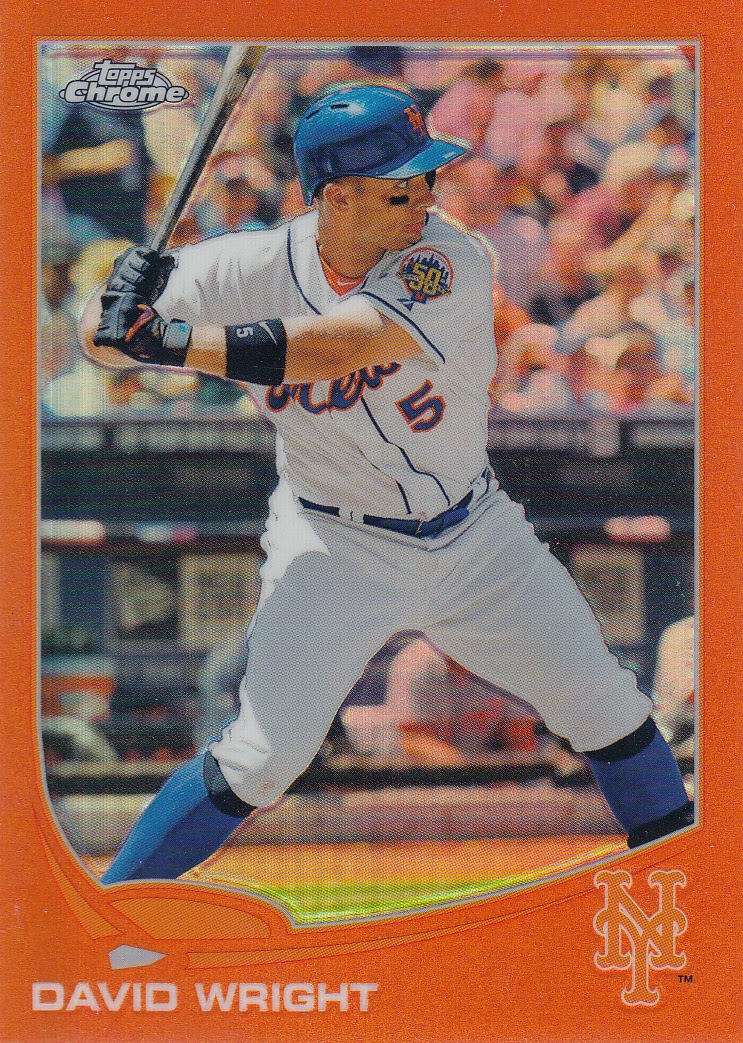 The big guy with the red suit and white beard is nearly here.  And, like the overgrown child I am, I'm getting excited!  After all, I put a lot of hobby-centric stuff on my wish list this year, such as a 2014 factory set of Topps, an Update hobby box and a Heritage High Number box set.  I'm hoping I've been good this year...or at least good enough to get some loot. Ha!

So, while we wait for St. Nick to truck through the First State, let's take a look at yet another holiday PWE that I received from the Shoebox Legend himself, Shane!

This is the second Christmas shipment I've gotten from my New England buddy this month and, as usual, it contained an assortment of Mets cards that were absent from my continually growing Amazins stash. 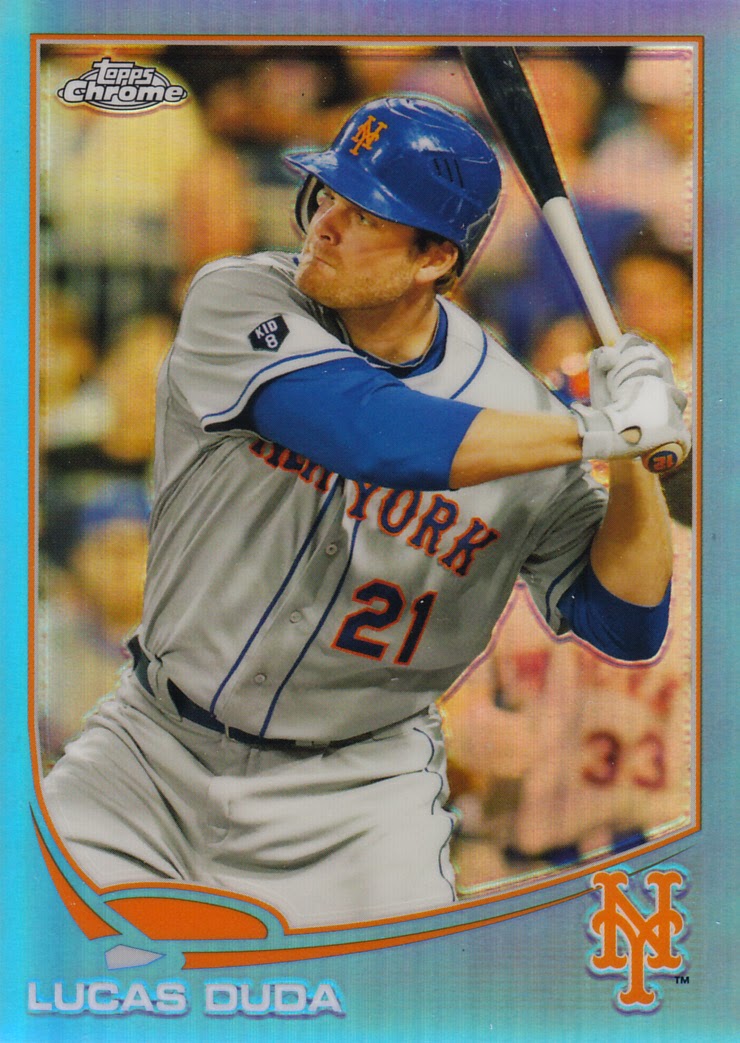 Just like any living, breathing human being, I enjoy the colored parallel refractors from Topps chrome.  An orange David Wright and a blue Lucas Duda from '13 Chrome are now part of my Mets collection.  Naturally, these colors in particular enhance any New York Mets card. 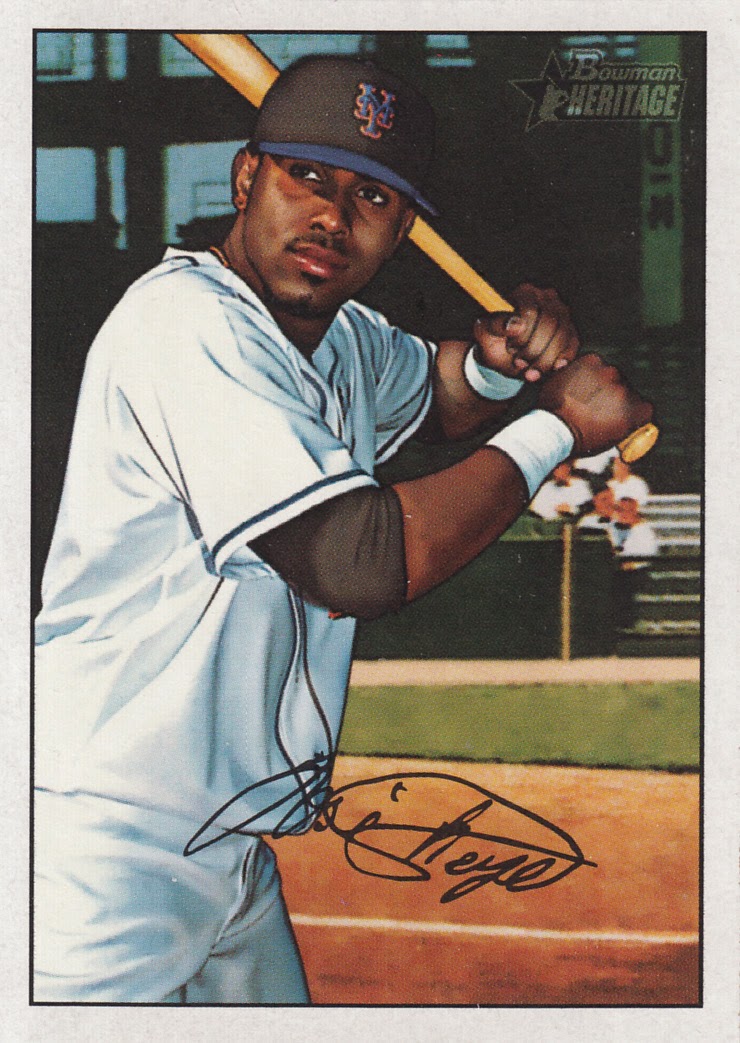 Bowman Heritage is a brand I missed the boat on, since I wasn't heavily collecting in the years when this was one of Topps' regular offerings.  I know we're all getting kinda fatigued by the whole faux-vintage thing, especially since Topps has really gone haywire with Archives.  BUT, I really love Bowman Heritage and I think they're very well done, just like their Topps Heritage cousins.

Of, and if you remember the last PWE I got from Shane, you'll recall nine cards from the 2010 Topps Mets factory set.  Welp, this newest envelope added a few more to the count... 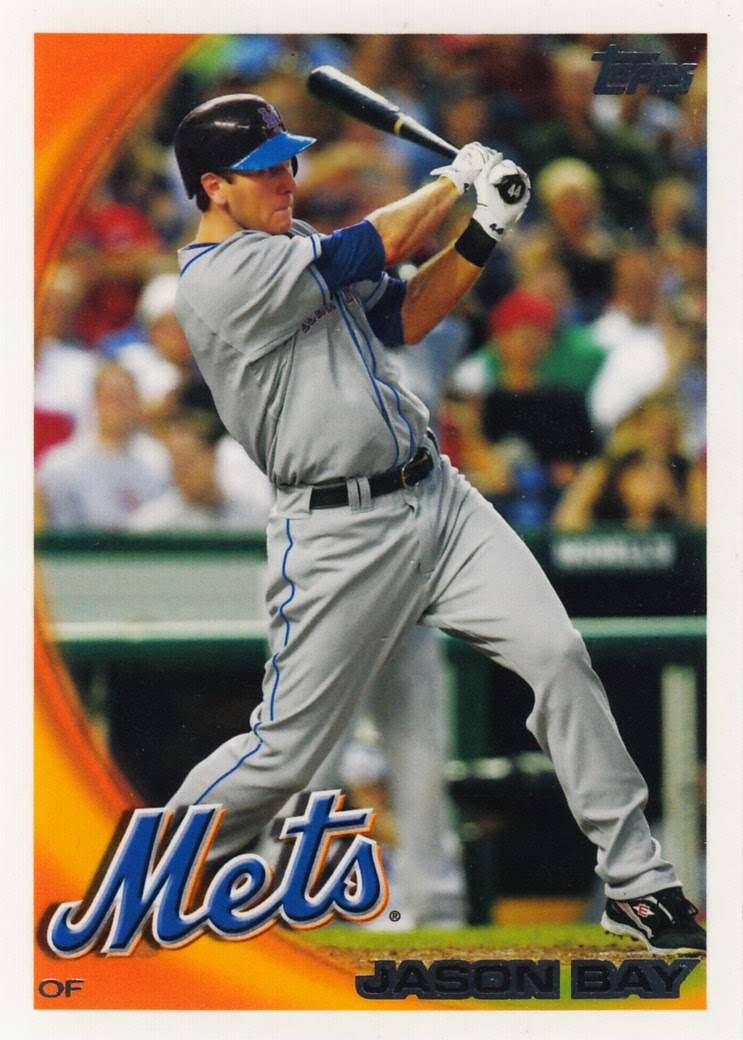 This is a total airbrush job, since Bay didn't get his first Mets card til 2010 Update, but it's still a pretty sneaky attempt and it doesn't look bad at all!  This is just one example of why these team-only sets are so cool, because you get these occasional photo variations that otherwise weren't in the normal set. 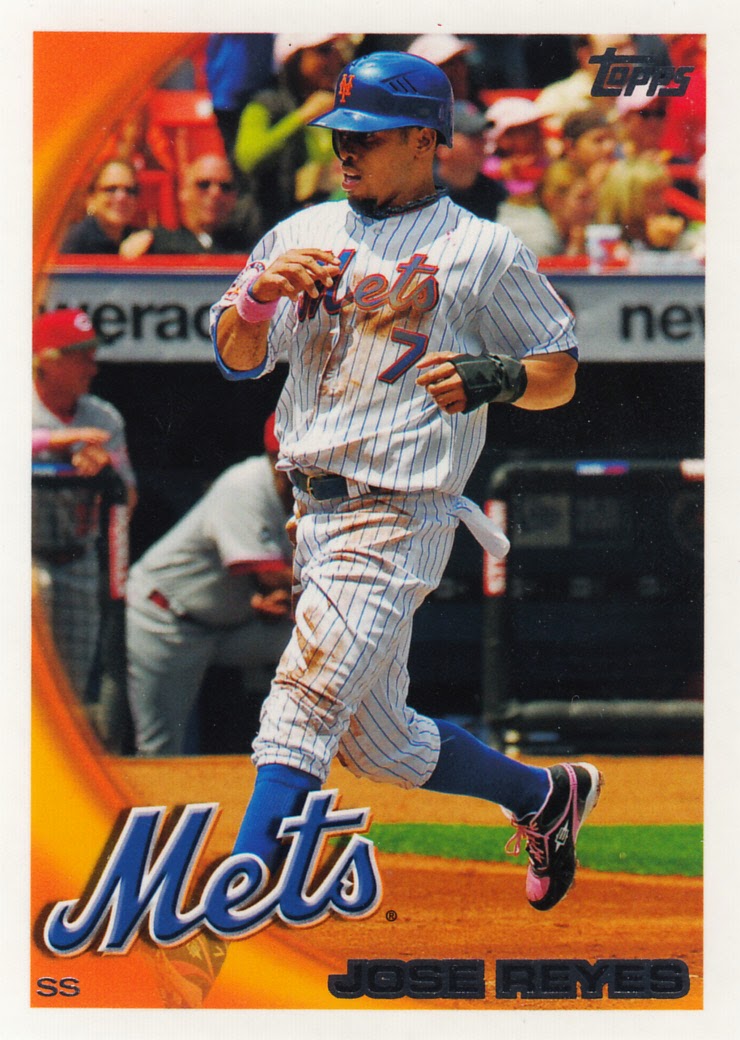 This photo may look familiar and, therefore, you might be tempted to think this is a duplicate of what Jose's regular 2010 Topps base card looks like.  However, this photo was used for Reyes in the Opening Day set, not the flagship.  His 2010 card was included in Series 2 Topps and featured Reyes sliding head-first into third base. 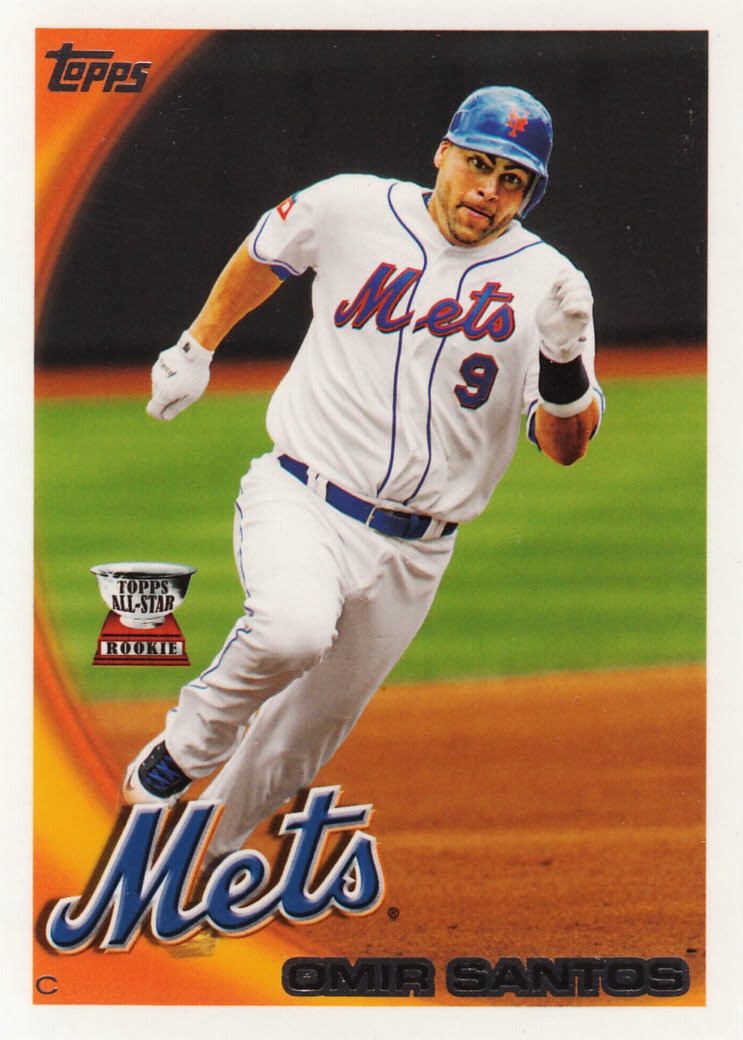 Another little slight of hand by Topps, as this is very nearly the stunt double of Santos' normal Topps card.  The only difference: this one has the Rookie Cup, while his regular issue does not.  Verrrry tricky!

No surprises for these next two, however, as they are identical to the real McCoy from the flagship set.  Still, both are very solid photo choices and, therefore, great-looking cards. 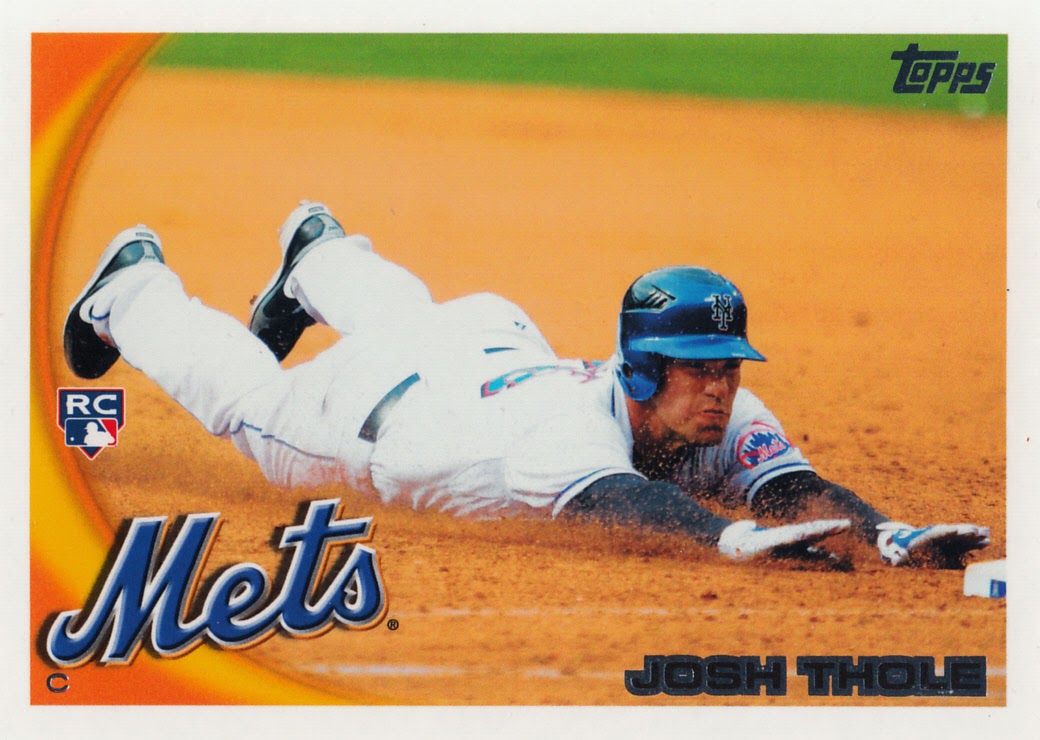 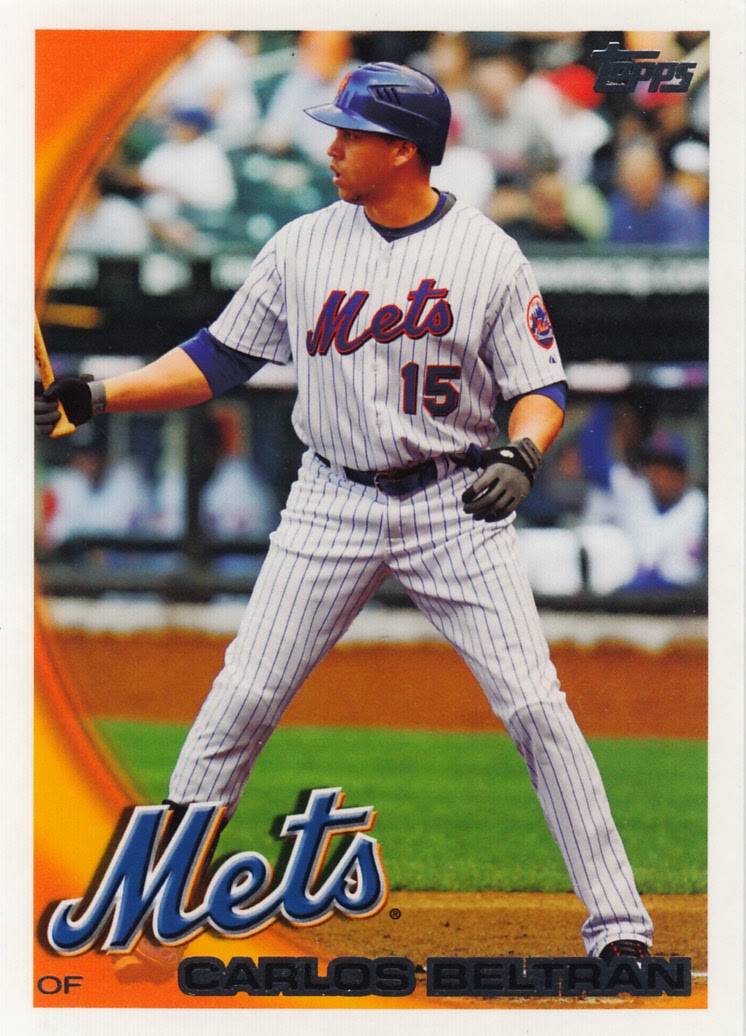 And, we wrap up this holiday PWE with probably the neatest card of the bunch.

Surprise, surprise, it's not a Mets card, nor it is even a baseball card... 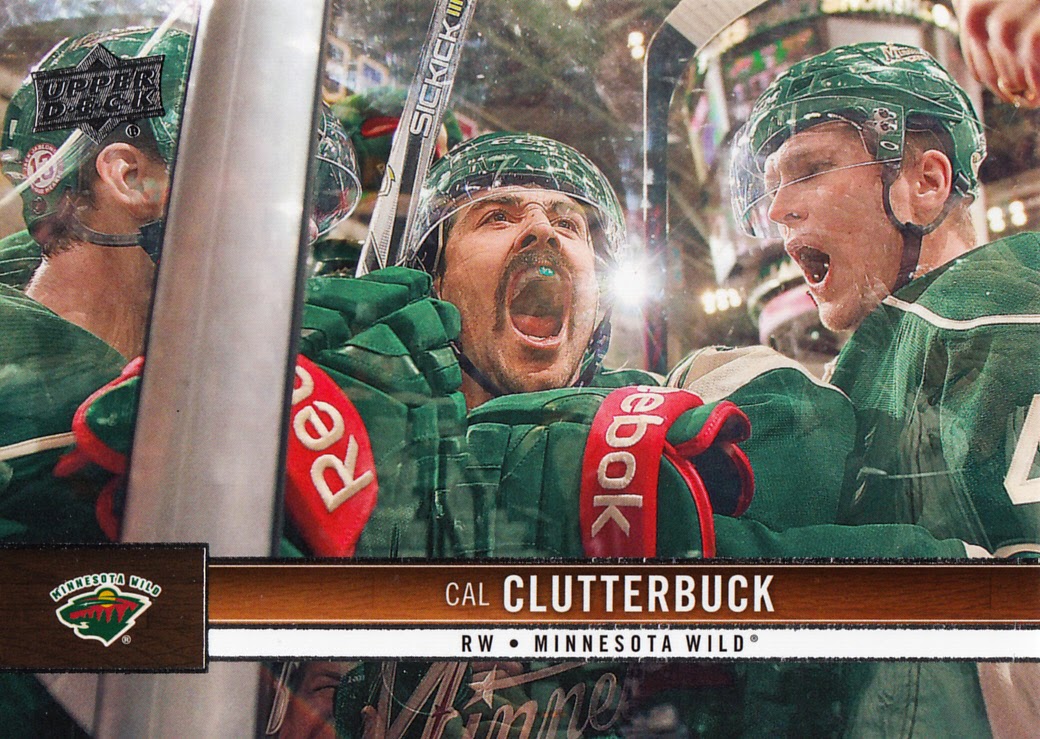 I've said it before and I'll say it again, if Shane's not careful he'll have me hooked on these damn hockey cards.  I recall seeing this one on Shane's blog a while back and thinking it was one of the best photos I've ever seen on any sports card.  Very cool that he earmarked a copy of it for me!

Once again, thanks for the thought and gesture, friend.  Merry Christmas!!