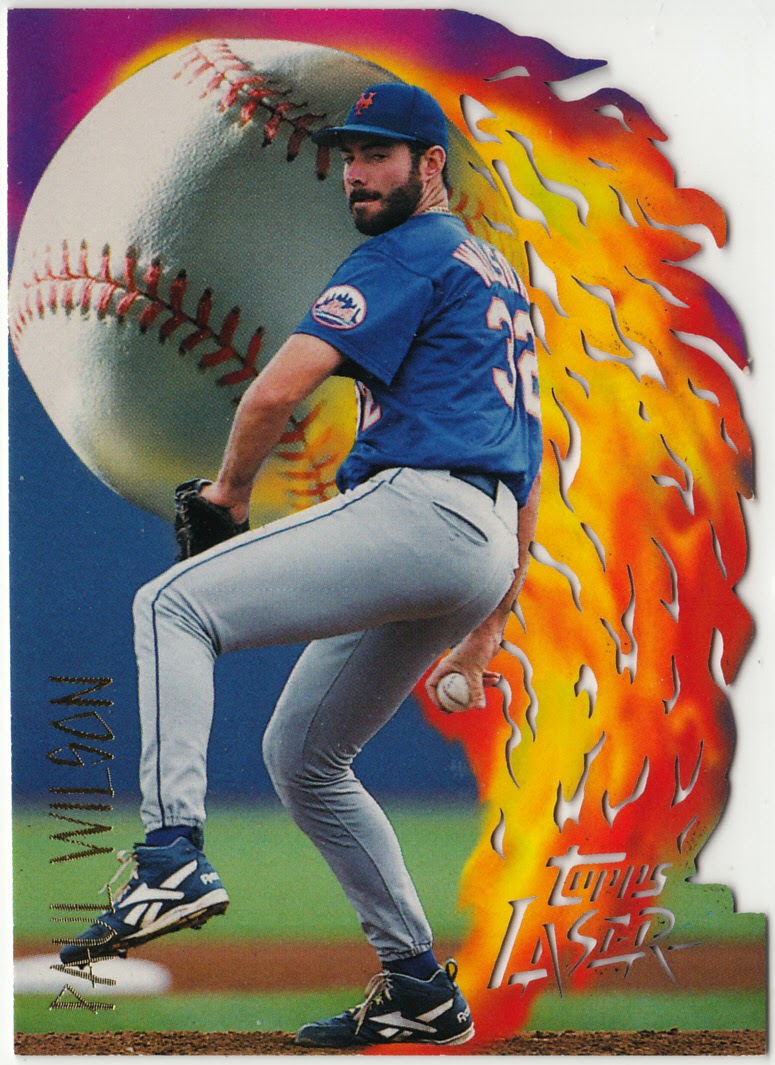 A day or so after I received Steve D.'s envelope, another PWE came my way via Shane of the tremendous Shoebox Legends.  He and I have gotten into the regular practice of swapping cards nine at a time lately, and I think it's been a tremendous run on both ends!

This latest one may be the best yet!

Sure, Topps Laser might not have been the most favorite or fondly remembered of Topps' many mid-90s gimmicks, but I happen to think they're pretty darn cool.  Look at that example up top of former can't-miss prospect Paul Wilson and tell me that ain't a badass card!  Gives a new meaning to 'bringing the heat,' eh?

Any more, it seems like when Topps does a die cut, it's usually very uninspired.  Like making a card in the shape of a hexagon just for the hell of it.  Or giving it jagged points or curves just because, well, why not? 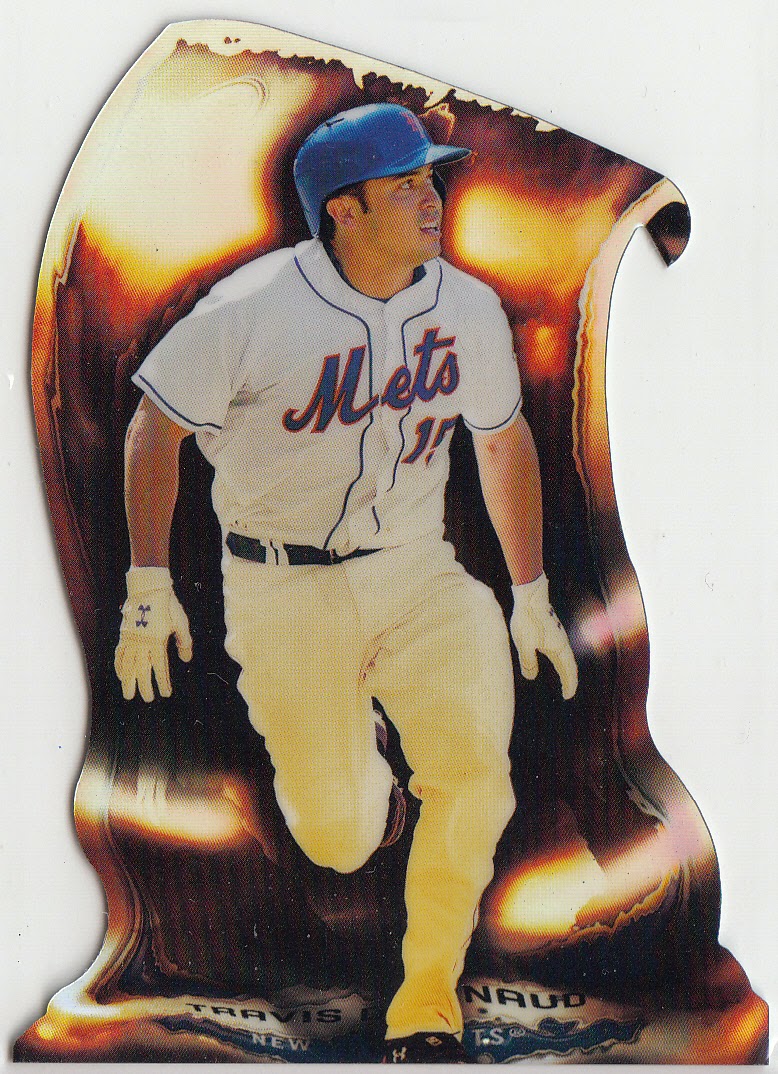 ...that totally redeems the whole practice of die cut cards!

Man, these are pretty awesome!  Bowman's 'Fire' die cut refractors are simply incredible.  The young players featured in this checklist are so 'hot' that they're melting the cards that depict them.  Corny?  Heck no, these are tremendously creative and very visually appealing, in my humble opinion. 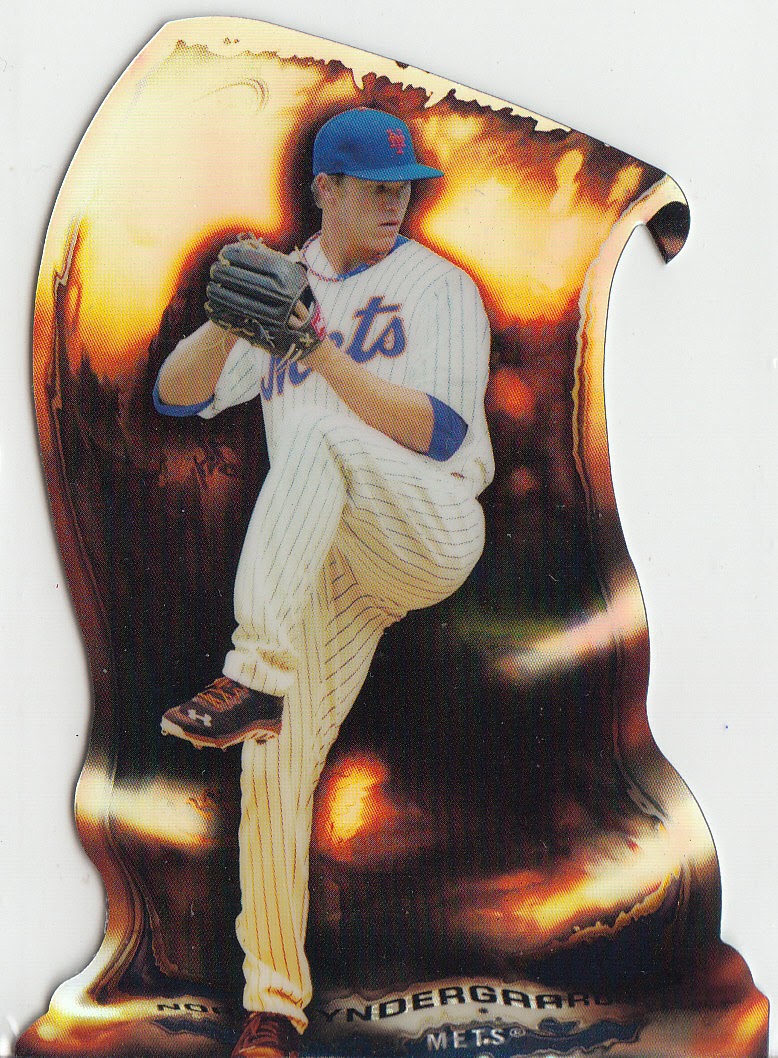 It doesn't hurt that two Mets are included in the player selection for this insert set.  Both Travis d'Arnaud and Noah Syndergaard will hopefully be fixtures at Citi Field for a long time.

These blistering inserts weren't the only Bowman highlights from Shane's latest PWE delivery... 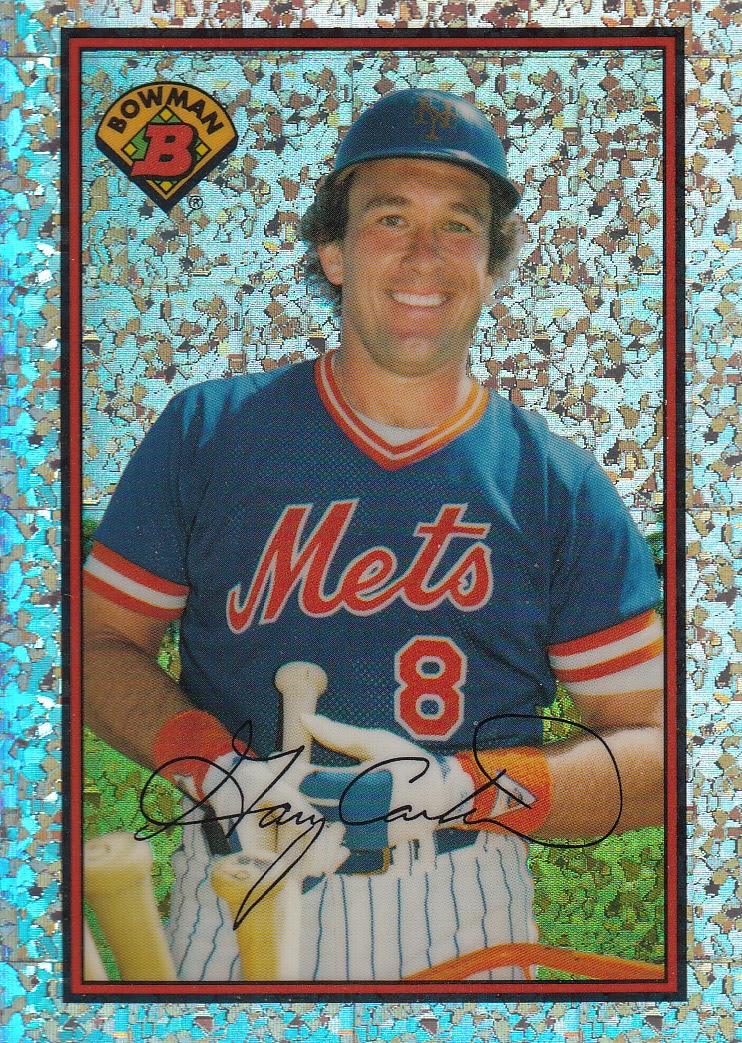 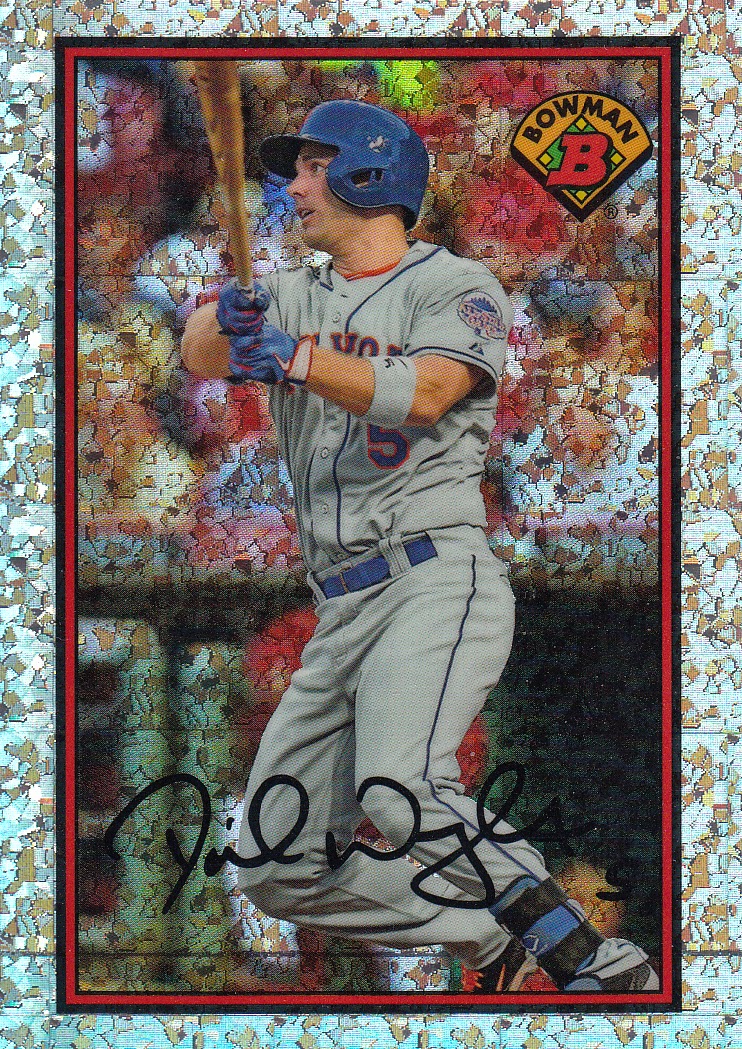 Aaaahhhh.  These cool characters bring the temperature down a bit, don't they?  Giving a shout out to the '89 comeback set, these 'Bowman is Back' sparkly refractors have been on my radar for the longest time, and I'm totally geeked to have them finally added to my collection.  A couple of cornerstones of the Mets franchise, past and present.  Doesn't get much cooler than that.

But, let's throw a few more coals onto the fire, shall we? 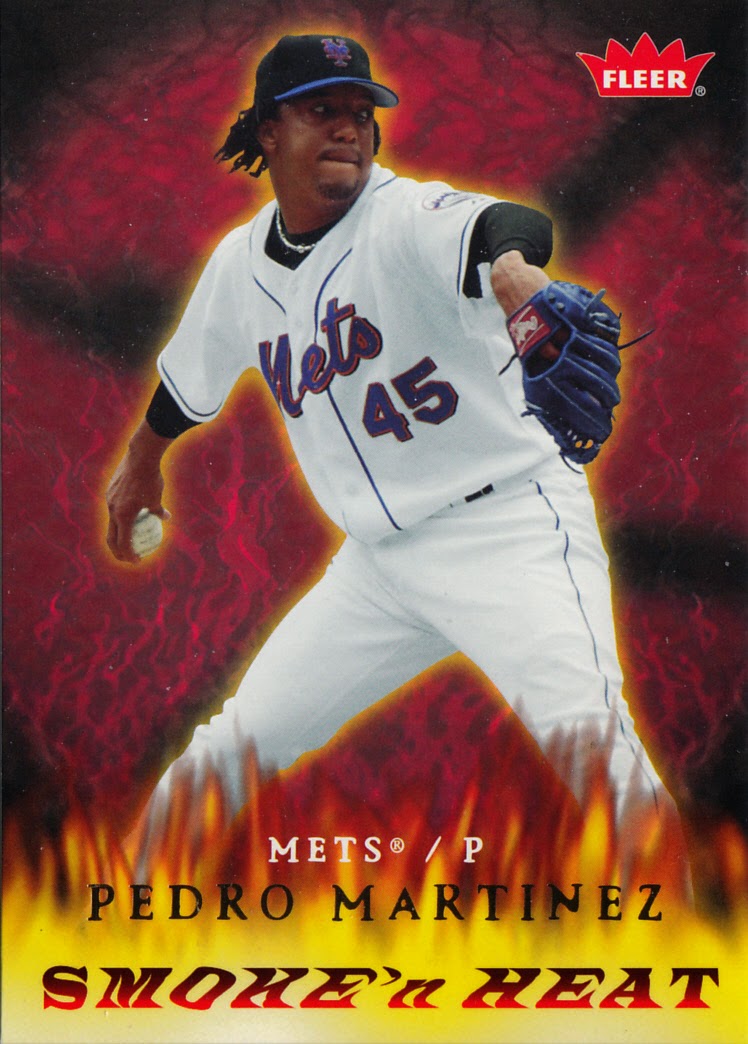 If Lucifer had a ball club...  Well, never mind.  Not to worry, Pedro made it safely out of the BBQ pit and into the Baseball Hall of Fame.  I'll never forget the game at Shea (I think it was the 2005 season) when the infield sprinklers came on during the midst of the 5th or 6th inning.  Pedro was on the mound and, rather than throw a Tom Brady-like tantrum, playfully pranced through the spray with a big smile on his face.  Pedro was a rare breed of superstar, for sure! 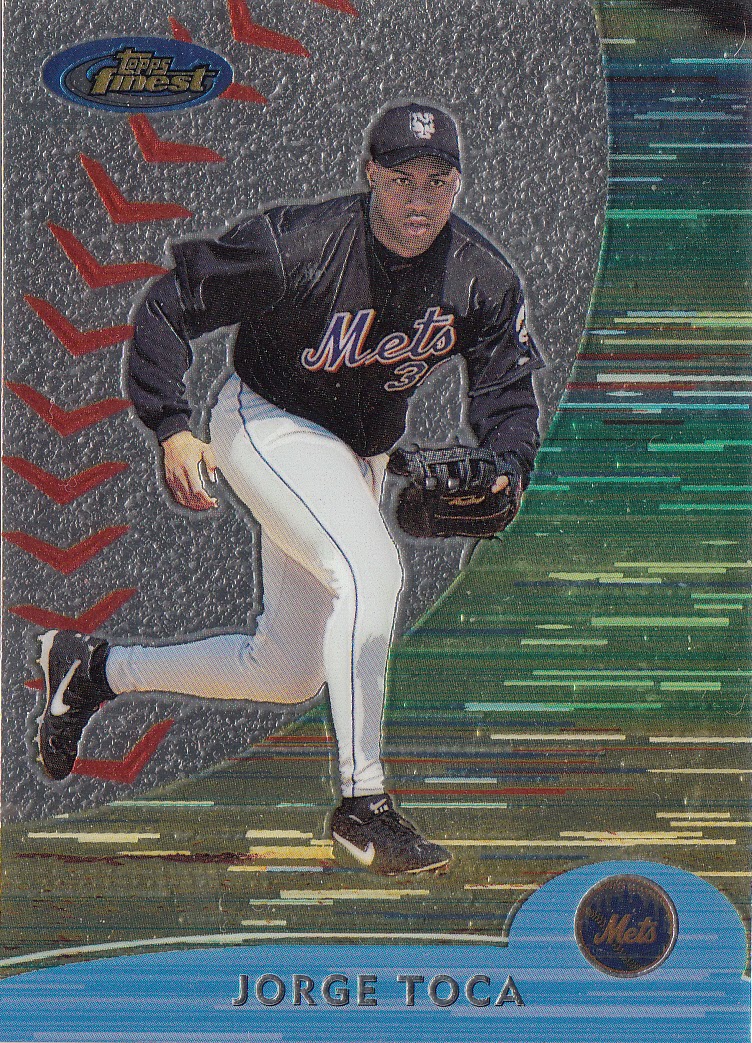 The final Met of the lot is a more obscure one, but I remember him well.  Toca was New York's big first base prospect during the late '90s and early '00s.  He got a taste of the bigs, but not much more.  This card, from 2000 Finest, had been on my Zistle want list. 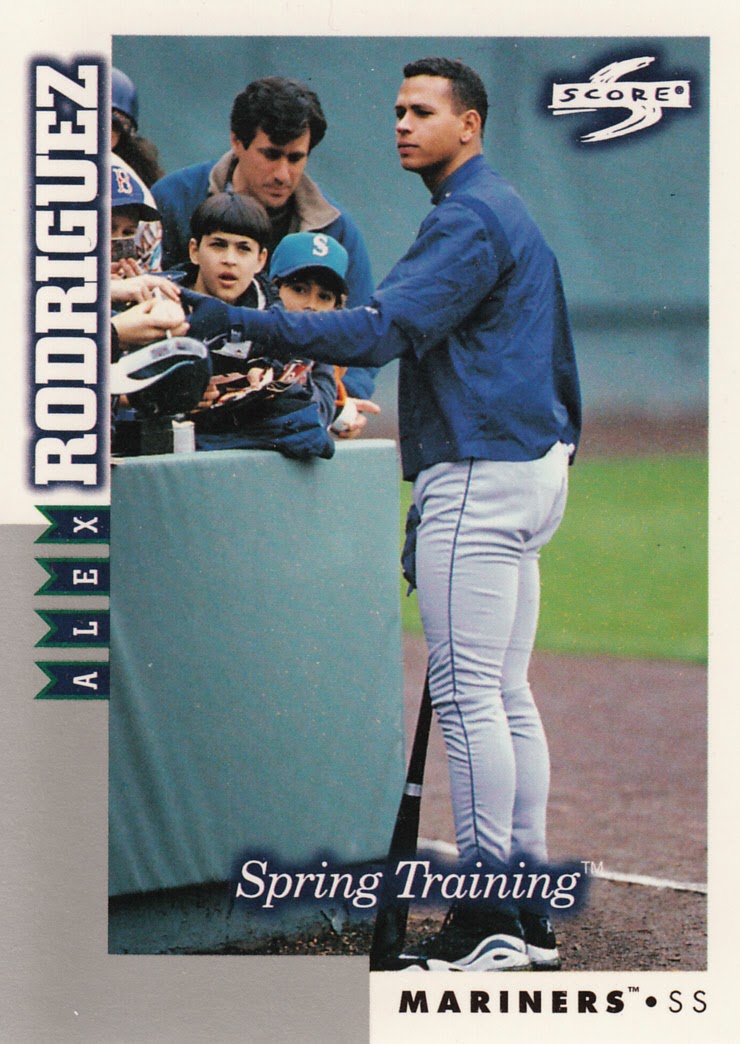 I freely state this: Any and every A-Rod card is welcome in the ol' Clubhouse.  From the Rookie/Traded series of 1998 Score.  I'm looking forward to what Alex may or may not do in pinstripes this coming season.

Finally, a little sliver of Shane's continued crusade to get me hooked on hockey cards... 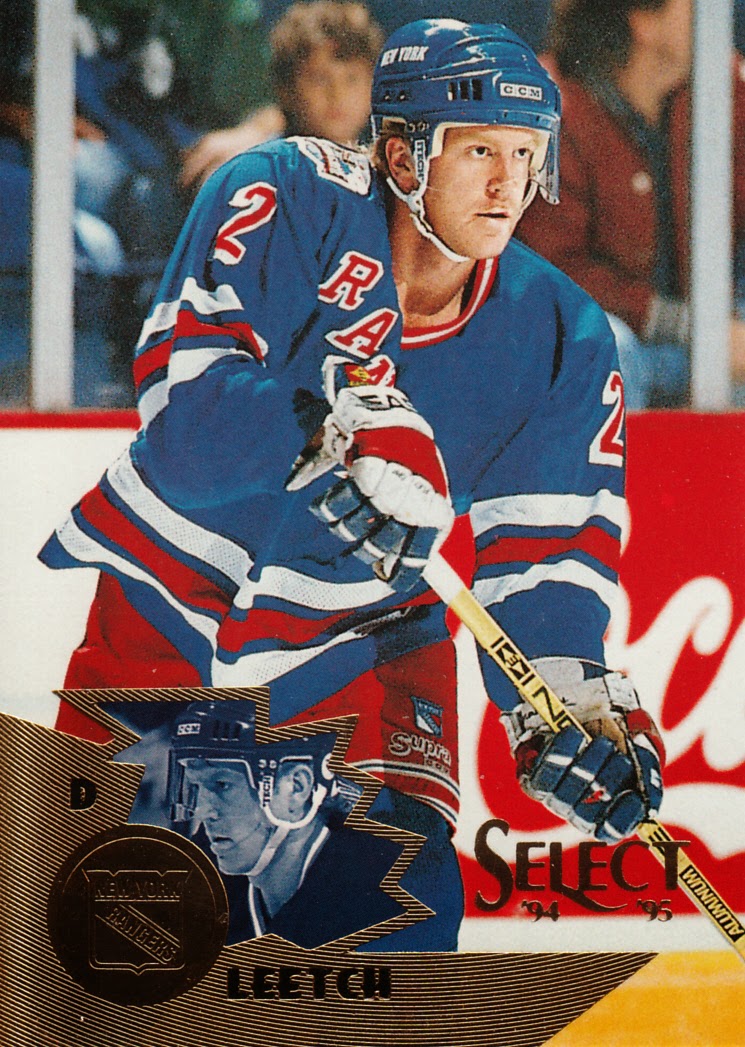 This'll work.  The greatest U.S.-born defenseman of all time and one of my boyhood heroes, Brian Leetch.

Still doing my best to avoid falling into the hockey vortex, but I'm sure it'll happen eventually.  Perhaps a card or two former Rangers captain Kelly Kisio might do the trick.  He was captain of the team when I first fell in love with hockey as a kid.  Obviously, he's not Messier in regards to captains, but when I was nine I thought he was the bees knees

Thanks again for an amazing array of cards, Shane!