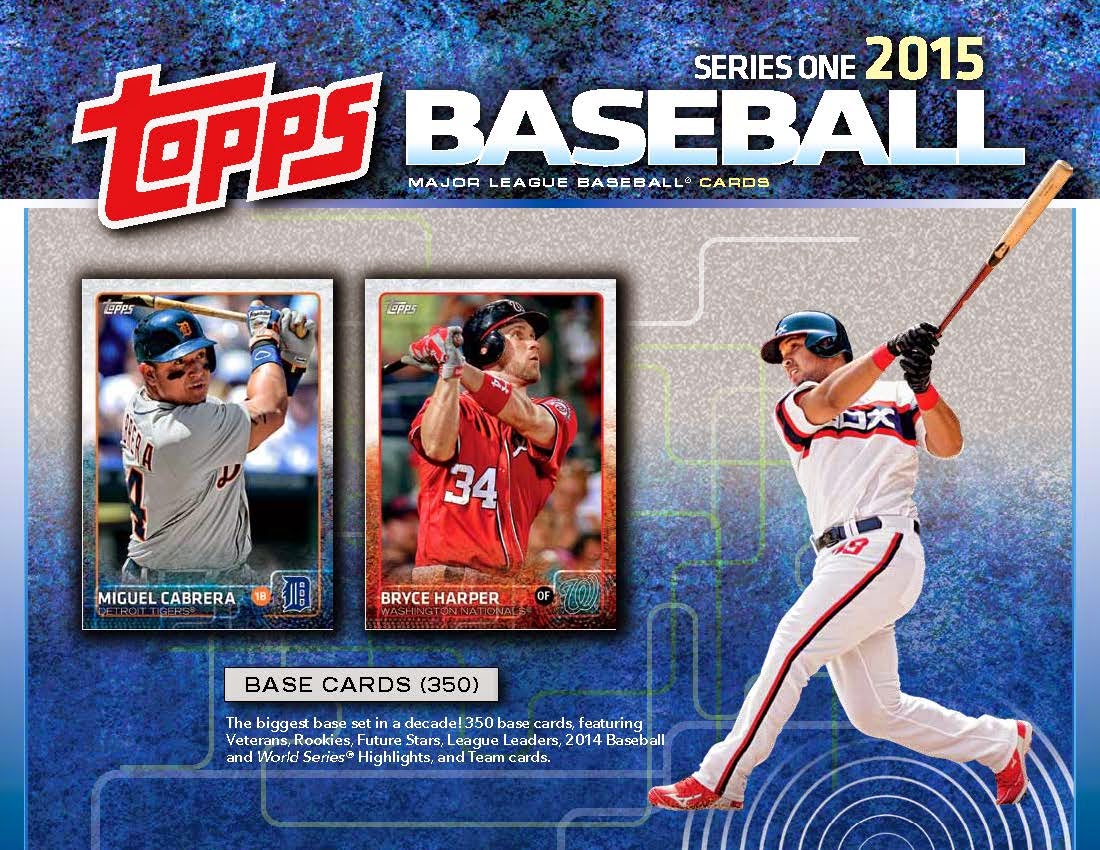 It's crazy to think about it, but we're nearly on the doorstep of the 2015 baseball card season.  Topps will release Series 1 of its flagship product early next month.

Omigosh, that's like practically a week and a half away!

This past Tuesday, as most of you are undoubtedly aware, Topps unveiled the full checklist of Series 1, including the inserts, autos and relics.  I'm not so much interested in the latter, as I'm mainly curious as to which Mets players are mixed into the base set.

So, without any further clutter, here's how we did...

[Edit: Whoa, I just noticed the checklist is 350 cards...not 330 like we've become accustomed to over recent years. I guess I shoulda read the sell sheet excerpt up top, eh? Pretty impressive, nonetheless!]

A couple of immediate observations:

-- I don't like team cards.  Never have, never will.  I absolutely would prefer a manager card to a generic team card.

-- I don't like multi-player cards generally, and that certainly includes league leader cards.  If a multi-player card doesn't contain a player or team you collect, what the heck do you do with these things?  If you're not chasing the set, how are you supposed to catalog or organize them?  I'm somebody who demands some semblance of order in his life, and these cards throw such a notion out the window.  Plus, Topps usually just recycles the same tired photo for the tiny sliver of space for each player on these LL cards anyhow.  No thanks!

-- That being said, I don't think I realized Lucas Duda finished third in the NL in homers. Good for you, dude.

-- As far as player selection, I'm pretty happy.  Especially for the inclusions of Torres and Herrera (new blood for the All-Time Mets Project!).  I'm also anxious to get a glimpse of what the Future Star cards of deGrom and Lagares might look like.

-- A slight groan from the peanut gallery, however, in regards to Matsuzaka (back to Japanese baseball league) and Young, Jr. (non-tendered by club) who are no longer with the team.  But, only a a slight groan, especially since I'm an EYJ guy.

-- Looks like we'll have to wait til Series 2 for guys like Matt Harvey, Jon Niese, Jeurys Familia, Travis d'Arnaud, Wilmer Flores, Ruben Tejada, Rafeal Montero and newest Met Michael Cuddyer, who will no doubt be in a photoshopped uni.

-- A pet peeve of mine is how Topps has the way-too-regular tendency to bunch up players from the same team on their checklists.  For instance, No. 236 through 244 contains four Mets, including back-to-back Amazins at 236 and 237 (Wheeler and Duda).  Yet, there are only three Mets contained within the first 127 cards of the series, and one of those is the stinkin' team card.  Can't someone quality control crap like this?  Does anyone feel the same way I do?  Or am I just being too persnickety?

As for the look of the cards themselves, I like what I've seen in the various previews, sell sheets and miscellaneous scans that are out there.  However, I always like to reserve true judgment until I have the real McCoy in front of me.

I'm definitely excited that Topps has decided to break free from the shackles of the clinical white borders for the first time since 2007,  Don't get me wrong, I'm not anti-white borders, but I like a little variety.  Perhaps this will begin a string of non-white border years the likes of which we saw in the late '90s and early '00s?  Time will tell.

In the meantime, I'm looking forward to February 4!