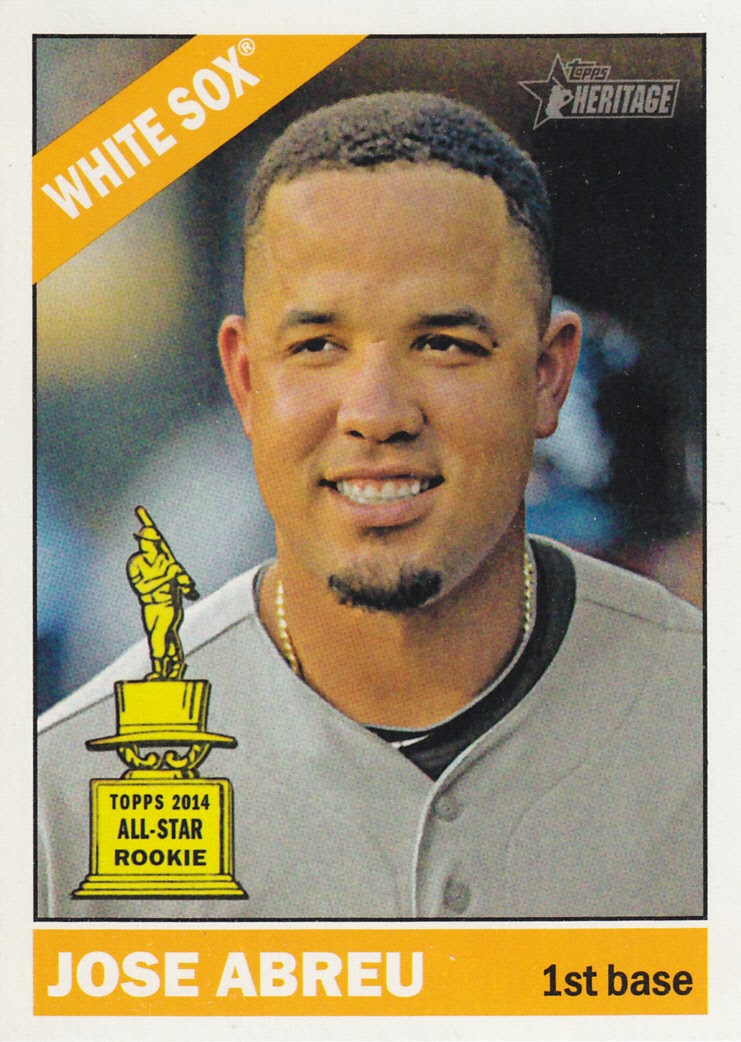 If it weren't for my wife, I don't know how or where I'd ever find the new baseball card releases.

I imagine people in other countries got their hands on 2015 Heritage earlier than I did.  Despite living within manageable radius of four Walmarts and a Target, it took nearly two weeks for these cards to sprout in northern Delaware and northeastern Maryland.  Believe me, I took several unnecessary trips to these places during that span only to come up dry each time.

So it was, I came home from work Monday afternoon to a surprise '15 Heritage hanger box sitting atop my closed laptop.  A byproduct of Mrs. K and Gabriel running afternoon errands.


I was overjoyed since, y'know, this is the set I most look forward to, and have spent hours and hours droning on about how much I love Heritage and how devoted I am to it and blah blah blah.  So, I was equal parts giddy and "well it's about freakin' time!" when I got my first glimpse of these wonderful things.  Twelve days after the rest of the card-collecting universe did.

Meanwhile, a teenager in Cambodia has nearly finished collating the base set.


Anyhow, I'll let it go.  I'm just happy to have begun my new journey towards Heritage bliss.  The cards themselves are fantastic.  Nice sturdy stock, retro-style photos and poses, vibrant colors: What's not to like?

I will say that I'm a bit weirded out by Heritage being sold in hanger boxes.  I know a few others have mentioned this in their initial write-ups of the product, as well, and I have to agree.  Nothing really 'old school' about a brick of cards wrapped in cellophane enclosed in an over-sized cardboard box.

Maybe that's nitpicking?  And maybe a tad bit hypocritical since there's absolutely nothing traditional or vintage about pricing a high series set of 100 cards at nearly $100, yet I lap that up like a dehydrated dog every winter.


Included in this hanger box along with an array of base cards, the highlights of which you can see above, were five shiny parallel cards.  They aren't 'chrome' and they aren't numbered.  They're just...shiny. 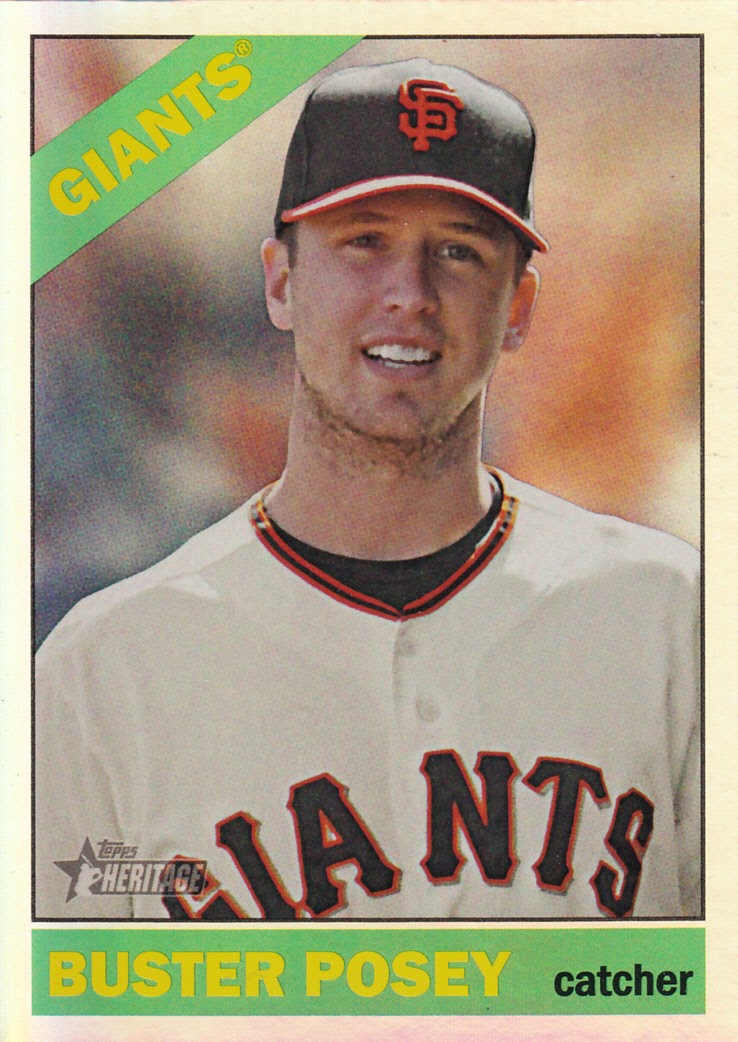 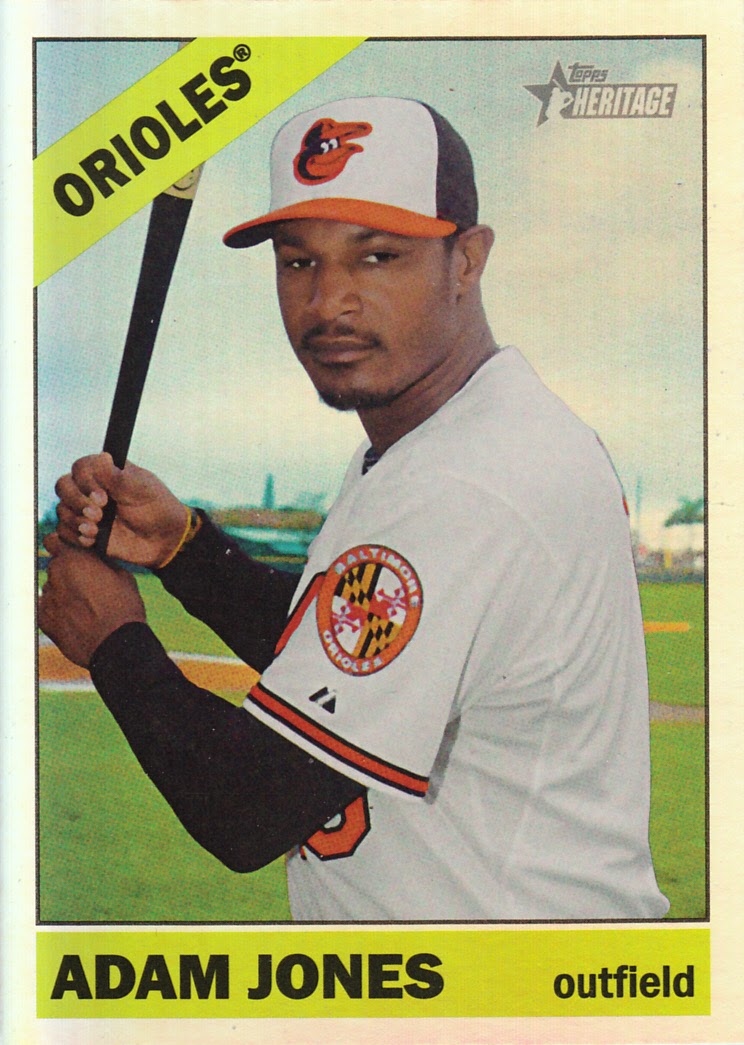 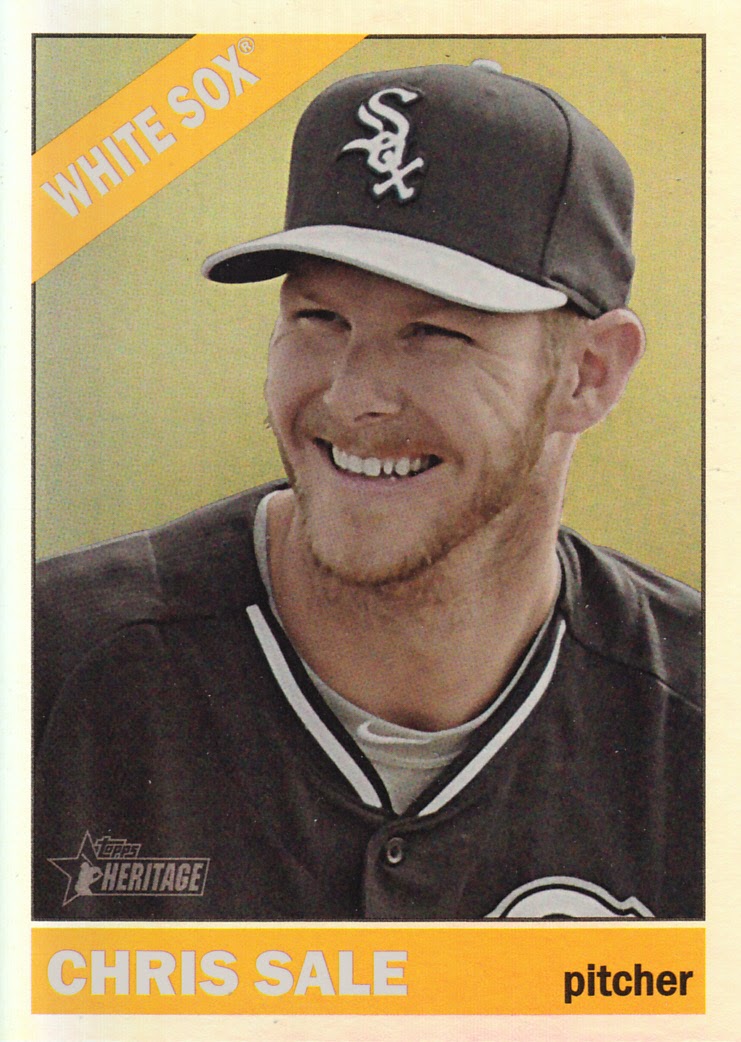 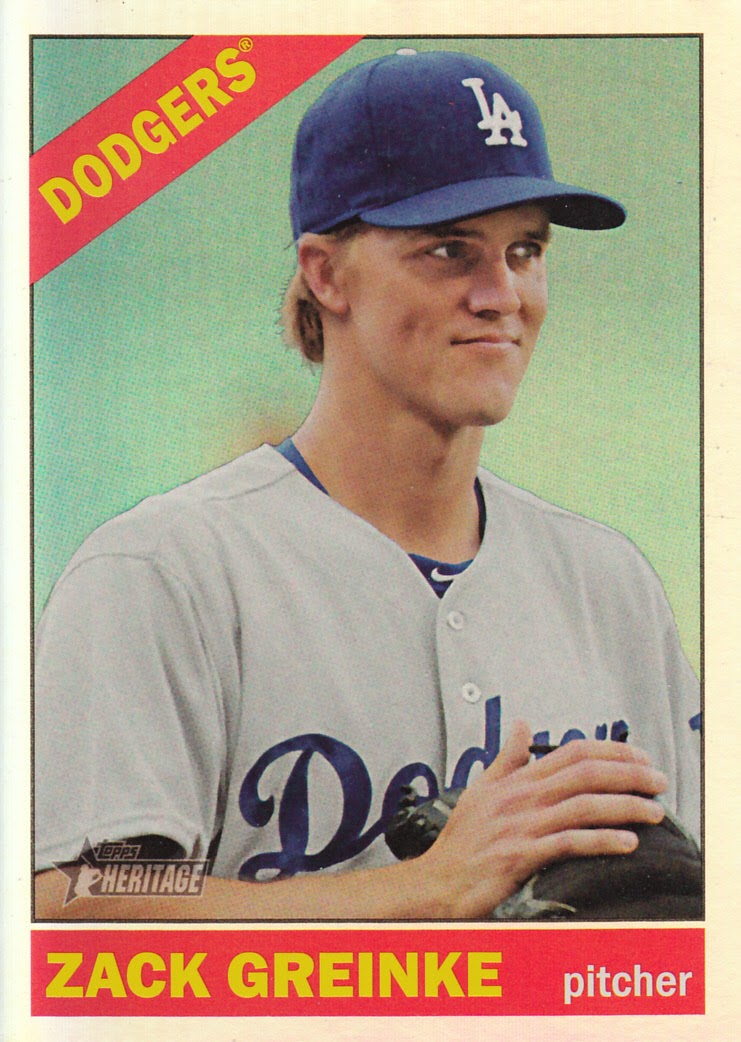 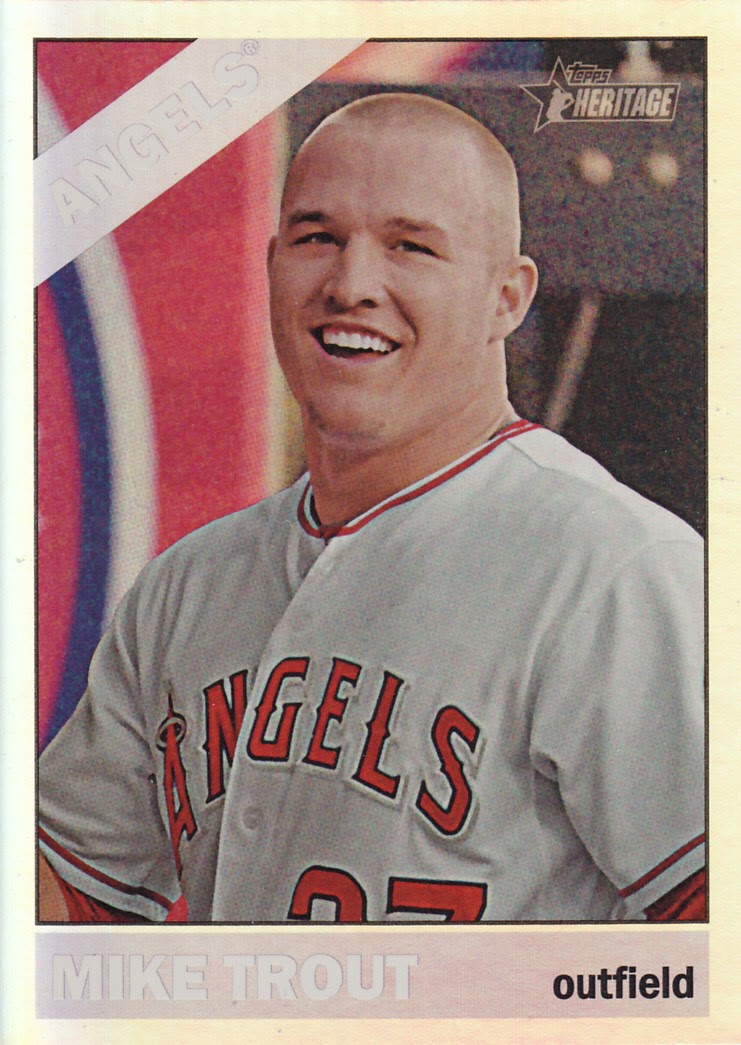 So I had to consult the internet for the answer to what I was seeing.  What this some sort of 'hot pack' or oddity that I lucked upon?  Well, the answer is no.  Okay, whatever, not a huge deal.  But, what I learned about these foil cards...well, it's a bit of news that I found to be horrifying and heart-sinking.

A hat tip to the excellent website Cardboard Connection for this bit of information on these retail-only foil cards:

In past years, Heritage retail blister packs have been home to exclusive Black cards. The blister packs are gone and so are the Blacks. Instead, 2015 Topps Heritage has hanger boxes. Included in them are foil cards not available anywhere else.


Good Lord!  The first blow was delivered to the solar plexus: no more blister packs.  And then the knockout uppercut right to the chops: no more black parallels.

This probably isn't a huge deal to most.  As a matter of fact, I'm sure many probably like these foil cards better than the black-bordered alternatives that the retail blister packs used to offer.  But, I love the look of the black bordered cards and was kinda fanatical about collecting them over the past few years.

To say I'm bummed would be an understatement.  Shiny is fine, but aren't these 'foil' cards just a cheaper form of chrome?  And, doesn't chrome already satisfy the collector's lust for all things that shimmer?  I don't get it.  And, furthermore, I don't like it!

Last year I opted to just buy a bunch of the blister packs (which, if you don't recall, were hanger packages that contained three retail packs plus three black parallels) instead of sinking the same amount for a hobby box.  After all, I'm not a huge gunner for relics or autos.  I just wanted those black cards.

So much for that plan.  I guess I'll have to go the route of the hobby box.  I'll have to think it over some more.

The saving grace of this entire experience, aside from the fact that I finally have in my possession new Heritage cards? 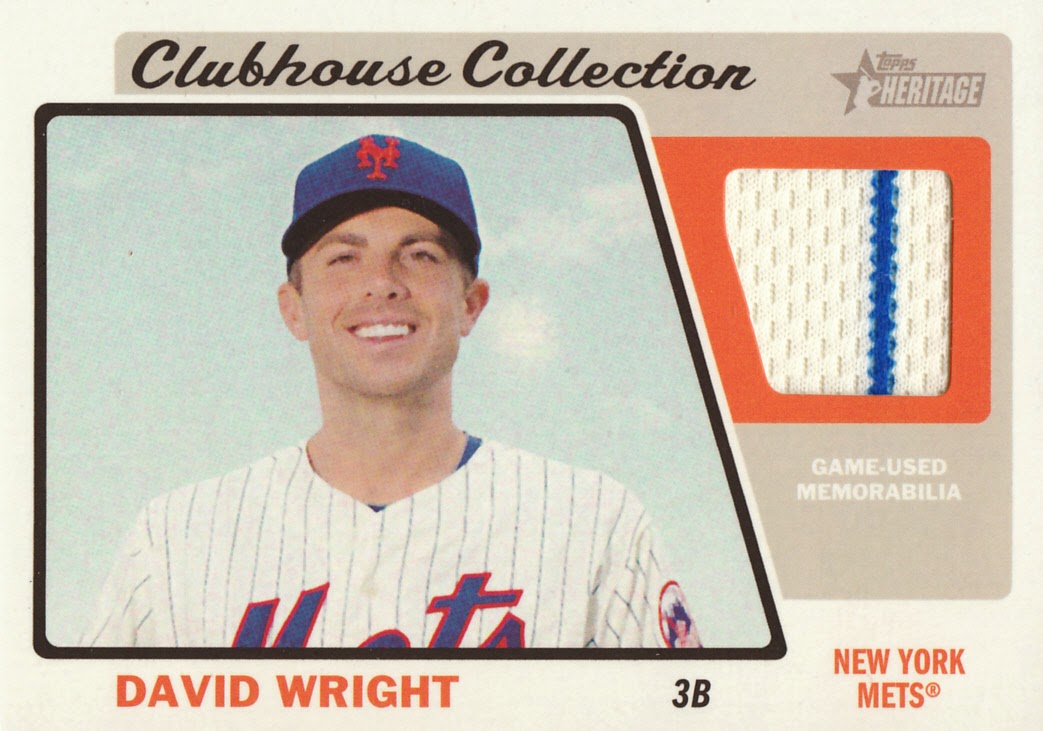 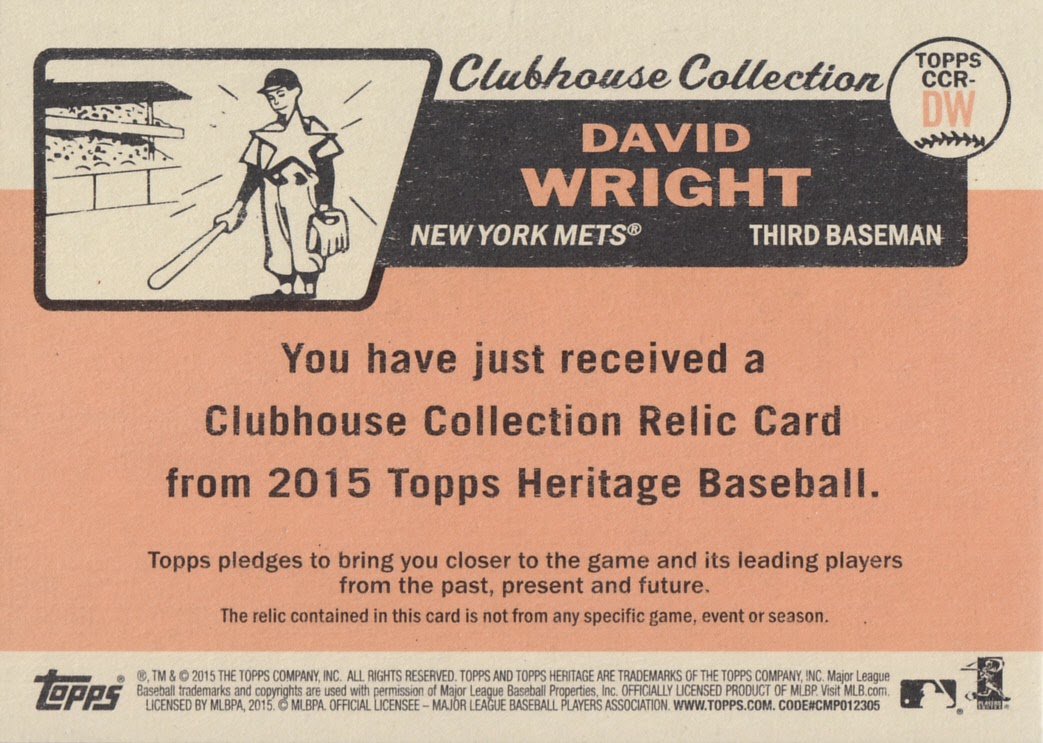 Hey, I might not be a advocate for jersey cards or relics or whatever you want to call them, but that doesn't mean I'll shun 'em, either.  Especially when it's a David Wright card.

It's pretty amazing luck to not only get one of these things in a retail pack, but to land your favorite player on your favorite team is like...well...it's like winning the lottery to a certain degree.  I mean, what are the odds??

So, while I may mourn the passing of the Heritage black parallel, this was Wright insert is a pretty good panacea for the moment.  And I'm sure the many months of Heritage-related retail therapy that lay ahead of me will soften the blow even more.

If you're keeping score at home, my first go-round with 2015 Heritage can be summed up as follows:  an unexpected joy followed up by a bitter disappointment and topped with an pleasant surprise.

Off to a rip-roaring start with lots of daylight to go!