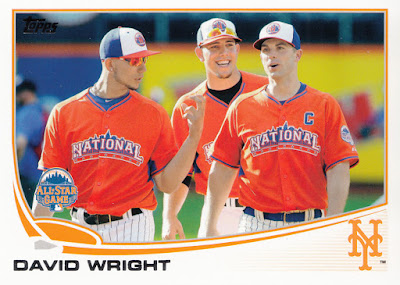 So, the Mets didn't win the World Series, and that is a complete bummer.  What can you do?  The better team took the prize, but I'm left with no shame or anger.  I always want to win, but at the same time I can take immense pride in the accomplishment of an NL pennant.  If you would've told me back in June that our Mets would be playing into November, I would've jumped through the roof.

With that, there's nothing more to say except: We'll get 'em next year!

Okay, let's look at some cards.  With my last COMC order I got another of those promotional scratch-off card thingies and won $10 worth of store credit.  Woo-hoo for me!

Thus, I began scouting out my next order immediately.  And, here's what I came up with...

Well, you can see the first card of the lot up above.  It's an All-Star Game photo variation of the Mets' captain from 2013 Topps Update.  Carlos Gonzalez and Jose Fernandez make cameos on this one.  I jumped at the chance to snag this card for under two bucks. 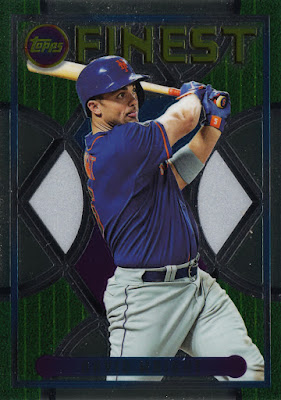 Another card of Mr. Wright.  This one is from the current year's Finest release.  It's a 1995-style insert.  Pretty good looking card! 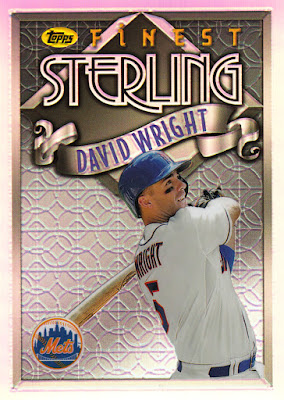 We complete the DW trifecta with yet another Finest insert.  This time, a Sterling refractor from the 2014 release.  I love the way this one scanned, especially when you compare it to the prior card.

Let's move on to some pitchers... 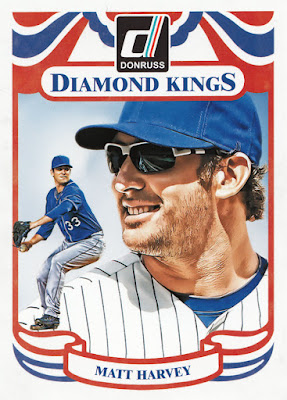 Matt Harvey was three little outs away from not only advancing the series to a sixth game, but from etching his name into the annals of World Series and New York sports greatness.  For eight innings, Harvey was as brilliant as brilliant could be.  Then the walk to Lorenzo Cain happened and, welp, the rest is history, as they say.  This card is a Diamond King from last year's Panini Donruss set, by the way. 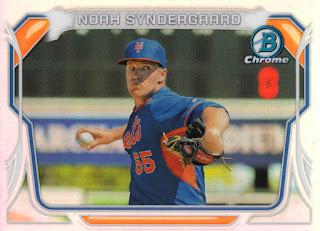 A 2014 Bowman Chrome mini of Noah Syndergaard, aka Thor.  Boy was he outstanding in Game Three.  Noah grew up in a hurry throughout the playoffs.  I can't wait to see more in 2016!  The best part: he's still only 23 years old! 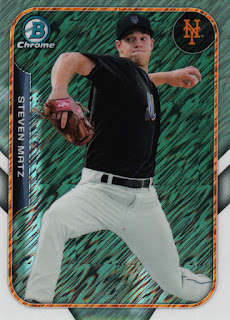 A mini Matz from this year's Bowman.  A "Farm's Finest" mini, to be exact.  Steven put forth a nice effort in Game Four and was in line for a victory before Daniel Murphy's error and a leaky bullpen laid it to waste. 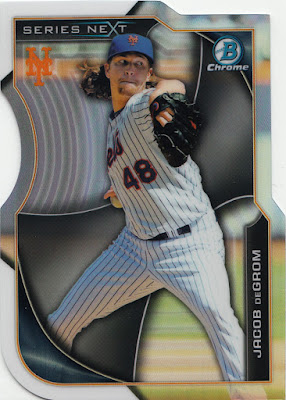 Jacob deGrom was terrific in this three starts through the Division Series and the NLCS, but was pretty ordinary in Game Two versus K.C.  No matter, he's still The Man in my books!  This funky-looking die-cut is from this year's Bowman Chrome.

Here's another from the same "Series Next" insert set: 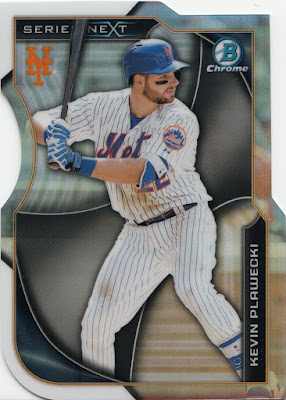 Kevin Plawecki made the 25-man playoff roster for every round as New York's backup catcher.  He didn't log a single plate appearance, nor did he enter any of the games as a defensive replacement.  Still, it had to be an amazing thrill to be on a World Series roster!  Especially when you began the season in the minors. 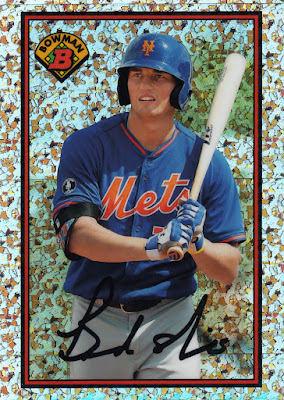 Another one of these fun "Bowman is Back" shiny inserts from a year ago.  This is Brandon Nimmo, who played at three levels of the minors this past season, compiling a .269 BA with five homers and 26 RBIs in 104 games.  He was ranked as New York's third-best prospect following the '14 season.

Last, but not least, a blast from the past... 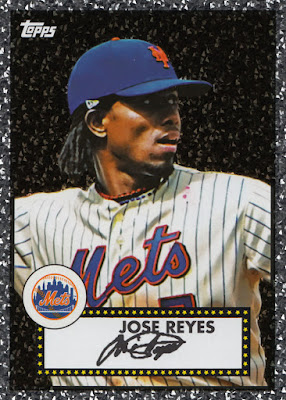 In 2011, if you sent a bunch of pack wrappers to Topps (or something like that, who knows) you redeemed these '52 style diamond, shiny, refractory things.  I would see these on eBay every so often and always wanted to track down the Mets.  And now I have one!  I believe David Wright and Johan Santana are also featured in this edition.

For $10 shipped, I'm pretty happy with this little group of cards.  And since it was all store credit, it didn't cost me a dime of real dough.  Ya can't beat that!

Sadly, COMC didn't include a scratch-off card with this order, so I'm not sure when my next order with them will occur.  But, I had a good time shopping with them recently, that's for sure.