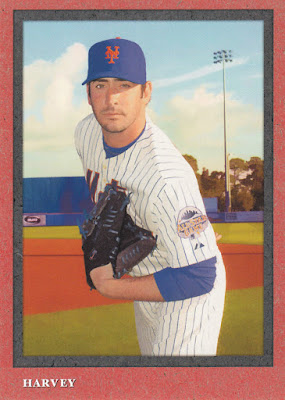 Tuesday night finally brings us to Game One of the 2015 World Series!  It'll be your New York Mets versus the defending AL-champion Kansas City Royals.  Should be a heckuva series!

Terry Collins' Game One starter will be Matt Harvey.  The UNC product has made a pair of starts through the first two rounds of the postseason, including a gem in NLCS opener against Chicago.

Up top, you see Harvey's 2014 Turkey Red base card.  It's one of the cards I recently picked up off COMC.  I'm usually not a big-time COMC shopper, since I've become spoiled by the basement-level prices I'm accustomed to finding at card shows in my neck of the woods.  But, I haven't been able to make a show in three months and, on top of that, I had a $5 credit on the site thanks to a promotional scratch-off card.

Of course, spending only five bucks at COMC is next to impossible.  I mean, shipping alone is three bucks.  So, long story short, I bought another 10 dollars worth of store credit and away we went!

Let's check out the rest of the loot, shall we? 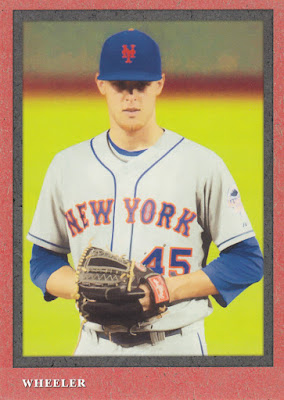 I snagged another base card from the '14 Turkey Red boxed set, which was released in limited quantities if I remember correctly.  Anyhow, I really love these things -- in particular this Zack Wheeler -- and they're pretty tough to find for a reasonable price.  At least in my shopping experiences.  There were four Mets in the set, with David Wright and Travis d'Arnaud making up the other half of the quartet.  I found the Wright in a dime box last year, meaning I'm one TdA shy of the team set!  Maybe that'll be part of a future COMC purchase, who knows?

Here's another of Mr. Wheeler... 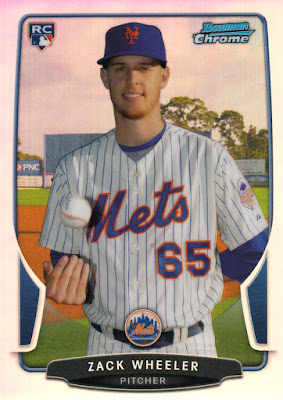 This one's a refractor.  A really nice looking rookie card of the young right-hander who unfortunately fell prey to the Tommy John bug during spring training.  If all goes well, he should be back with the club by the 2016 All-Star break.

As you'll see, the rest of my order was very current roster-centric. 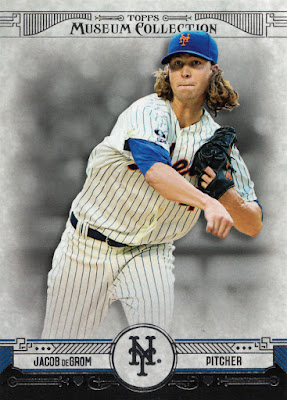 I love the look of this year's Museum Collection.  A super high-end product that I'll never purchase a pack/box of in my lifetime.  But, finding singles of my Mets for a song and a dance is good enough for me.  Jacob deGrom is slated to start Game Two against the Royals, by the way. 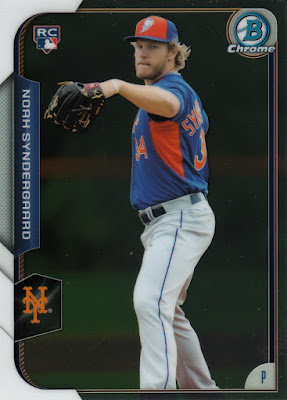 Noah's Bowman Chrome base rookie.  This one was a must! 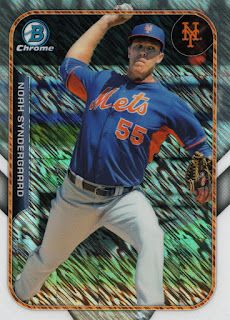 A "Farm's Finest Mini" of the hulking right-hander. 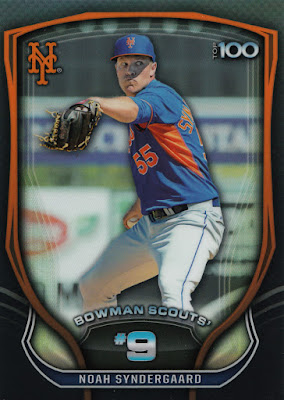 Syndergaard will get the ball in Game Three, which will be the first-ever Fall Classic contest played at New York's Citi Field. 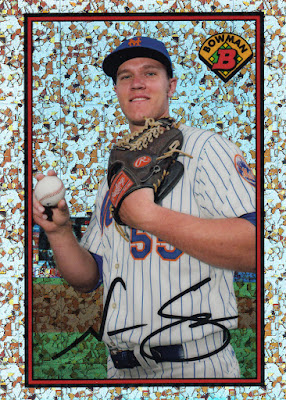 Perhaps my favorite of all the Thor cards in this shipment.  This one was the priciest of the quartet, but well worth it.  I really dig these shiny "Bowman is Back" inserts.  Apparently, this one was inserted into Bowman Sterling packs.

Onto the Game Four starter... 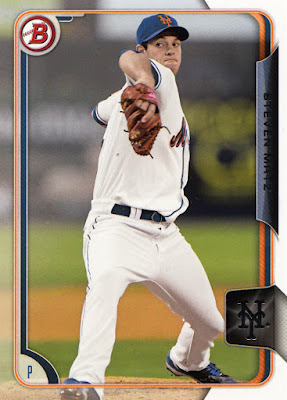 I had to get my hands on Matz's 2014 Bowman base card.  Even though it's technically not his "rookie" card, it's pretty much his rookie card. 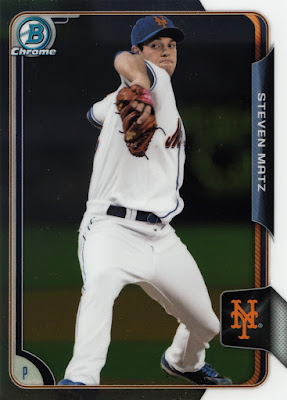 And I couldn't pass up the Chrome version, either.  I'm glad TC is allowing Matz to take the ball in this series. While he hasn't been as dominant as his right-handed counterparts, the Long Island native has been effective enough to give the Mets a chance to win both times out so far. 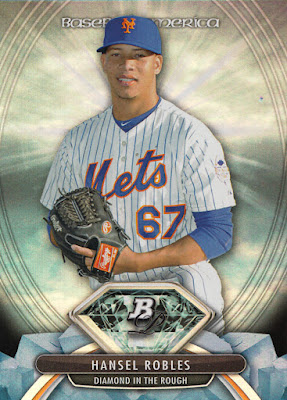 Hansel Robles won't get any high-profile opportunities out of the 'pen during the Series, but he's a hard thrower who can eat up an inning or two if needed.  This "Diamond in the Rough" insert is from 2013 Bowman Platinum. Pretty sharp card, if you ask me.

Okay, how about some position players? 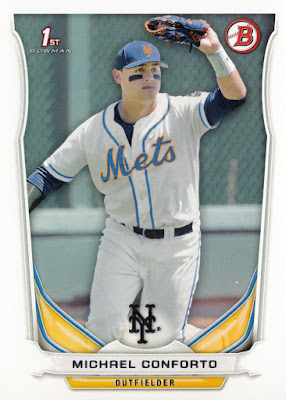 I had to stock up on some Michael Conforto cards while they're still priced reasonably. 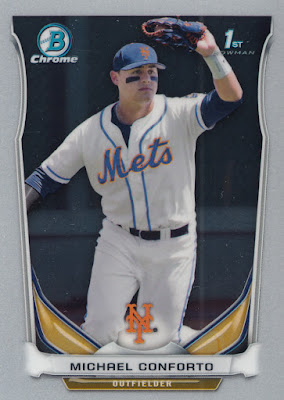 Conforto hasn't gotten any starts against southpaws in the postseason, but he projects to be the team's everyday left-fielder in 2016.  He looks like quite the pure hitter, and he's got a fantastic arm. 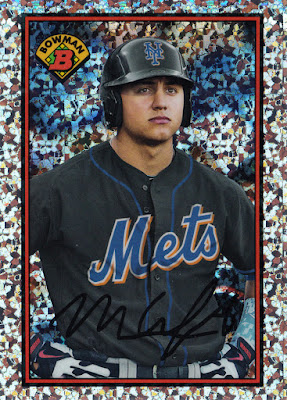 Another of those glittery, shimmery "Bowman is Back" inserts.  This is still Conforto, by the way.

And we'll finish up with a pair of cards that I was super-excited to snag. 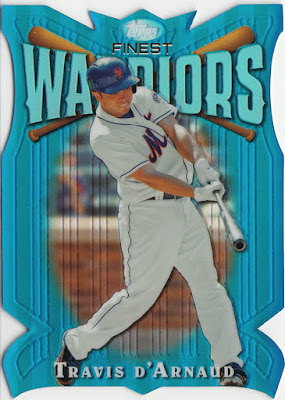 From 2014 Finest, this is a die cut refractor insert of New York's backstop.  He's got three homers this postseason and has been solid behind the dish.  Handling this hard-throwing staff can't be easy night after night. I hope his catchers mitt has appropriate padding. 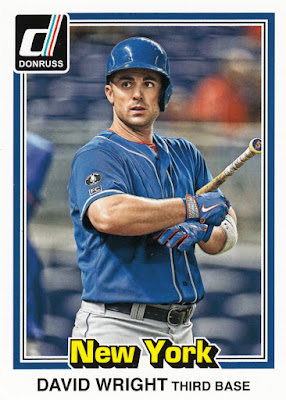 One of the coolest Mets cards of 2015, in my opinion, this is a short-print from Panini's Donruss set.  The design for these SPs is, of course, a nod to the original '81 Donruss set.  I love everything about this card.  The photo choice, the framing, you name it.  The fact that it is bereft of team logos is a complete non-factor in my book.

That'll be a wrap on my latest COMC order.  Really happy to add these shiny new cards to my Mets collection, which is just 81 shy of the 7,000 mark.  Hard to believe!