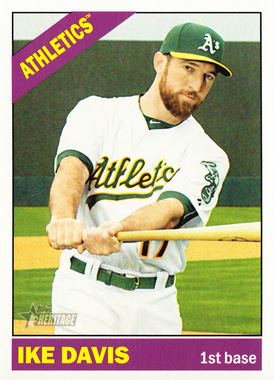 I felt like scanning some more of the Heritage High Number cards since they're still fresh and new to me.  Plus I wanted to add some images to the Zistle library.  Hey, it's a nice set, so why not?

I grabbed a dozen more cards that came out of the twin blasters I picked up recently.  So, let's check 'em out!

Leading things off is card No. 504, former Met Ike Davis who is shown in his green 'n gold Oakland A's uniform. Since he departed Queens in early 2014, Davis has slugged just 13 home runs in 550 ABs.  It would seem the Mets made the right call when they chose to keep Lucas Duda over the Ike-ster.


A former Yankees prospect, Solarte wrapped up a nice season for the Padres, hitting .270 with 14 homers and 63 RBIs.  Seems like a solid piece moving forward.  Then again, I'm not the person to talk about the future of the Friars.  Better leave that to my buddy Marcus.


Pham, a former 16th-round draft pick, appeared in 52 games for the Cards during the regular season, collecting 22 extra-base hits in 153 ABs.


Another Padre?  What's going on around here??  Along with his teammate Yangervis, Odrisamer is absolutely on the All First Name Team for 2015.


As far as I know, he's the only active Archie in the big leagues.  On April 11 of this past season, at the age of 22, Bradley hurled six innings of one-hit, no-run ball versus the Dodgers to earn a 'W' in his major league debut.


One of my favorite cards of the set so far for various reasons.  McCullers, the son of a former big leaguer by the same name, fashioned a nice 3.22 ERA in 125 2/3 innings during his freshman campaign.


Orlando is a former world-class sprinter from Brazil.  I was working for the Class-A Wilmington Blue Rocks in 2008 when the Royals acquired Orlando from the White Sox organization.  The speedster had been playing with Wilmington's intra-league rivals in Winston-Salem and joined the Blue Rocks midway through the '08 campaign.


This guy always seems to come up with a huge hit against my Mets.  The stats bear it out.  The former George Mason Patriot compiled a blistering .359 average with four homers and 11 RBIs in 13 games against the Amazins this past season.


Marlon seems to be a fan favorite no matter where he's played.  He has hit at least 23 home runs in each of the least three seasons which included stops in New York, Pittsburgh Philadelphia, Cincinnati and San Francisco.


A first-round pick of the Rangers in 2012, Gallo debuted in the bigs with a bang on June 2 when he hammered a round-tripper and collected four RBIs.  In 26 games for Texas, Gallo smacked six homers in 108 ABs.


Peterson is a nice looking player who should factor into Atlanta's long-term plans.  He compiled 34 extra-base hits, 52 RBIs and 12 steals while playing in 152 games for the Braves.


The first "Slade" in major league history.  He saw limited action for the Bronx Bombers this year, appearing in just 17 games with only 25 at-bats.  He connected off Kansas City's All-Star closer, Greg Holland, for a two-run shot on May 25 for his first major league homer.

That's all for now.  I'm sure I'll scan-and-share some more later this weekend.  I have a few late nights ahead of me since Major League Baseball continues to cater to the Left Coasters with these start times.  A 9:45 p.m. EDT start time for my first Mets playoff game in nine years?!?  Pfffffft.