You Say Wilmer, I Say Wuilmer 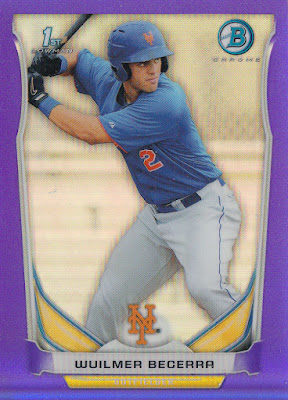 The most recent PWE delivery from my guy Shane at Shoebox Legends featured the usual potpourri of cardboard delights, covering everything from Mets to Vlad Guerrero to N.Y. Rangers.  In other words, another grand slam by Shane!

We'll, of course, lead off with the Mets cards.  The purple refractor you see up top is of a player named Wuilmer Becerra.  Who or what is a Wuilmer, you may ask?  Well, this young man was one of the four players the Mets received from Toronto in the R.A. Dickey trade a few years back.  To recap, the Mets snagged catcher John Buck, then-prospects Travis d'Arnaud and Noah Syndergaard, and Becerra, a lower-level minor leaguer.  In case you were curious, Becerra batted .290 in 118 games for Savannah of the Low-A South Atlantic League this past season.

But, the Mets are an organization blessed not only with a Wuilmer, but a WILMER, too! 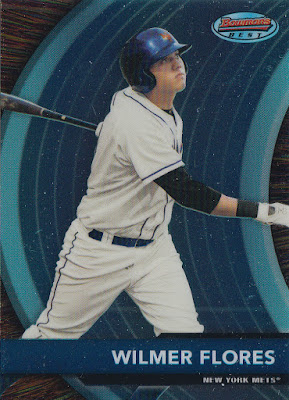 The rest of the baseball world is very familiar with Wilmer by now, since his on-field crying episode was trending hard on social media back in late July.  This is a great card, by the way.  I love the Bowman's Best inserts. 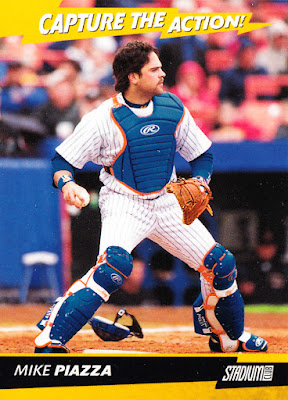 We now transition into the Mike Piazza portion of the post.  A pretty awesome "action" insert from 2001 Stadium Club. 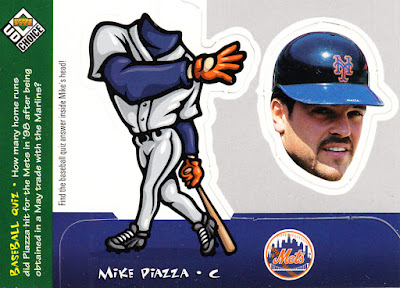 This looks like a good time!  I really enjoyed Collector's Choice for stuff like this.  The cards were inexpensive, fun, and featured the same great UD photography.  It was the best of all worlds. 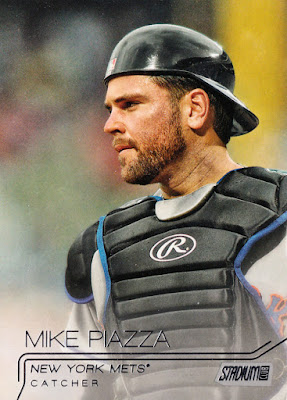 I'm still in the process of tracking down the Mets base cards from this year's TSC release, so I was more than happy to receive this one.  This is a pretty great photo choice for Mike.  As much as he'll be remembered mostly for his offensive exploits, I still favor his 'catchers gear' cards. 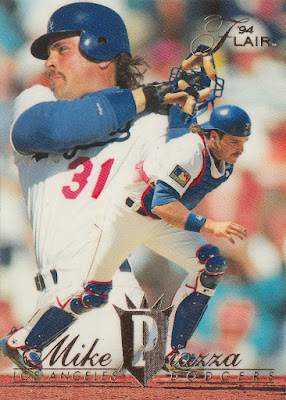 I'm trying to avoid all things Dodgers of late, but sometimes it's unavoidable. In this case, I'll just focus on the man. 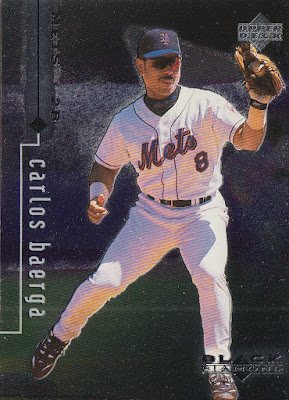 Let's wash away the sour aftertaste of Dodger Blue with another Mets card.  One of my favorite short-term Mets of all-time is Carlos Baerga.  He was essentially washed up when the club acquired him from Cleveland, but nobody played with more heart than this guy.  He poured his heart and soul into the team and was proud to be a Met.  And for that I'll always be a fan. 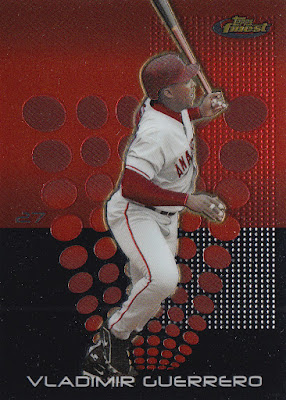 Vlad!  Finest!  It looks like he's getting sucked into a vortex of red circles.  I dig it!  This is Vlad card No. 361 in my collection!

And we finish up with a card from the New York Hockey Rangers... 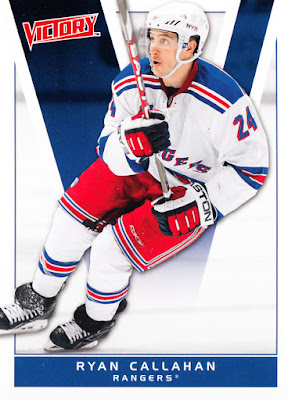 The former captain of the Blueshirts has already netted a pair of goals for Tampa Bay this season.  The Rangers, by the way, are off to a pretty decent start, too.

A tip of the cap to you once again, Shane, for an awesome array of cards!!