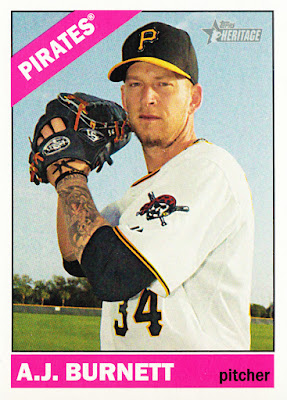 Let's delve a little deeper into the world of 2015 Heritage High Number.  Here's another 12-card sampling from the pair of blasters I grabbed a couple weeks ago.  I already showcased most of the important highlights, but when it comes to Heritage, every card matters!

In the leadoff spot is card No. 520, A.J. Burnett.  The former Mets draft pick has thrown his final pitches in the big leagues, as he rides off into the sunset at the age of 38 with 164 wins over 17 seasons.  You'd have to figure this will be A.J.'s final Heritage card.  But, you  never know with Topps!


Walker has the distinction of being the first card in the High Number series.  Christian has appeared in a grand total of 13 major league games, including seven this past season for the O's. Last winter, MLB.com ranked the former fourth-round selection seventh among first base prospects across both leagues.


The lefty-throwing Cecil last appeared in a Topps Heritage set back in 2011.  He has also appeared in the Heritage sets from 2009 and '10 -- the former also being of the High Number variety.  The Maryland native went 5-5 with five saves for the AL East champs this year.


This is Chavez's third-ever Heritage card.  He also popped up in last year's 100-card High Number box set. Prior to that, his rookie card was featured in the 2009 High Numbers series.  Chavez set a dubious career high in 2015 with 15 losses--a total that was second-highest in the league.


In each of the prior three years, the speedy Maybin appeared in the regular 500-card Heritage checklist as a member of the San Diego Padres.  The former first-round draft choice found himself in Atlanta thanks to the Craig Kimbrel trade.  His ten home runs and 59 RBIs for the Braves in 2015 were both career bests.


Joyce became an Angel in December of last year when the club acquired him via trade from Tampa Bay.  The Tampa native had a card in this year's regular Heritage set, as well (#117), pictured wearing his prior team's uniform.


I guess I'm not as good of a baseball fan as I thought, because this is the first I've heard of Mason Williams. Quick research tells me he was one of the young outfielders called upon to be a stopgap when Jacoby Ellsbury got hurt early in the season.  Williams clouted a homer in his major league debut--a two-run shot off Baltimore's Ubaldo Jimenez on June 12.


I knew about this guy because I had him on my injury-depleted fantasy baseball team earlier this summer. Jungman, a former first-round pick, has huge upside for the Brewers.  He went 9-8 with a 3.77 ERA for Milwaukee in 21 starts this season.


Here's ex-Met Mike Pelfrey.  New York drafted Big Pelf out of Wichita State with the ninth overall pick in the '05 draft.  While he didn't make the main 500-card checklsit this year, Pelfrey has been featured five times in Heritage sets during his career, including last year's main edition.


After serving as an integral part of San Diego's bullpen for so many years, Gregerson was dealt to Oakland a couple of winters ago before joining Houston via free agency last December.  He led the Astros staff with 31 saves this season.  This is Gregerson's second Heritage card; his first came in 2013's main set.


Quite by coincidence, this post has featured the first card of this series and now it also included the omega card (of the non-SP checklist, anyhow).  Card No. 700 features former-Blue Jay Casey Janssen who joined the Nats as a free agent last winter.  Casey appeared as a member of the Jays in this year's regular Heritage issue, as well (#77).

That's all for now.  I will probably throw another dozen onto the barbie before I get tired of this theme.  Then again, who knows.  If my blogging history has shown anything it's that there is no rhyme or reason.

Til next time.  Let's Go Mets!