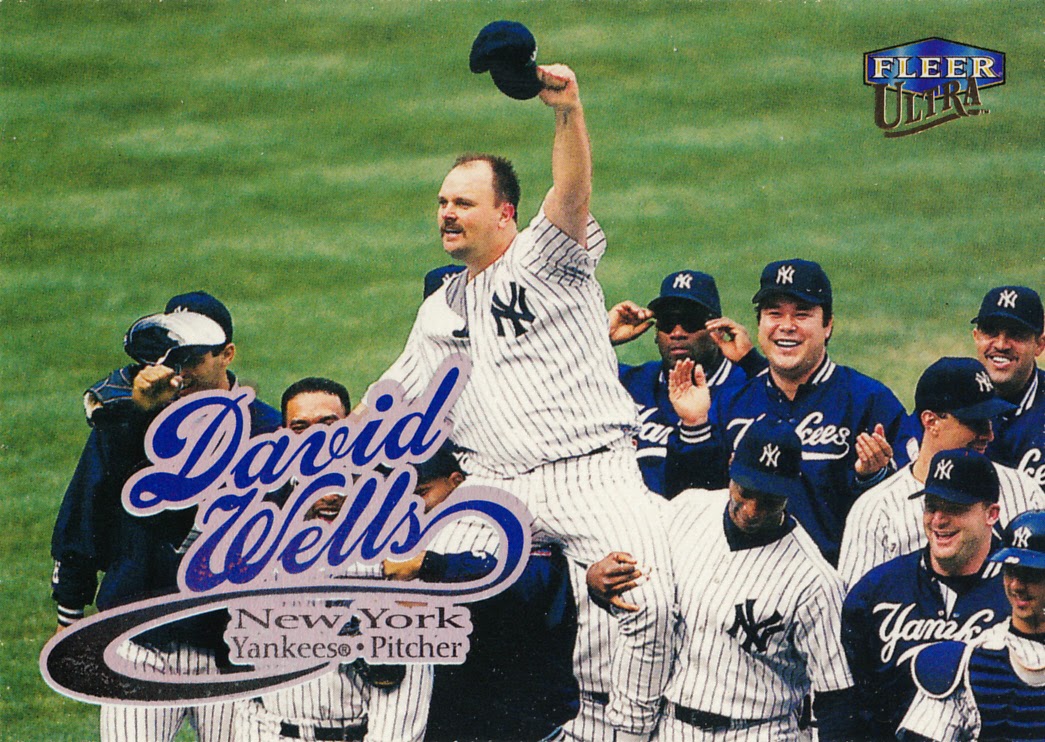 In addition to scratching my continual itch for new Mets cards to add to my collection, Just Commons serves as a great resource for landing some fantastic cards for my ongoing Horizontal Heroes frankenset.  If you comb through their database long enough, you're bound to be rewarded with some epic finds.

I completed an order a couple weeks ago and, thankfully, Nick from Dime Boxes left a few good cards behind after the tremendous cart he put together!

Most, but not all, of the cards you'll see in this post will make the cut for the HH frankenset.  In case you're new to my ramblings, Horizontal Heroes is my concept for a 660-card mash-up featuring nothing but horizontal cards. Any and all brands are fair game.  Parallels are not forbidden, but they aren't necessarily encouraged.

I was probably the proudest about landing the above David Wells card from '99 Fleer Ultra.  I only found out about this one recently and I knew I had to have it for my set.  Boomer's Yankee teammates are hoisting him skyward in the aftermath of tossing the 15th perfect game in big league history.  Talk about a great base card!  The card number for this one is 35, and it's absolutely set in stone for the frankenset.

And now the rest of my horizontal haul, presented to you in numerical order...


Uh, yeah.  This one is also a stone-cold lock for the frankenset.  I first saw this one on Night Owl's blog some time ago.  I've been in love ever since.  Man, 1999 Ultra was some kinda set, no?

More from '99 Ultra.  I think this Eli Marrero 'play at the plate' card is a safe entry into the set.

This one, as you might note, has the same card number as the Marrero above.  I knew this one wouldn't make the cut when pitted against the Marrero, but I grabbed it anyhow.  It's still a pretty neat card of Byrd, a player who left a positive imprint during his time as a Met.

Some Shinjo Web Gem action most certainly will have a place in the 660-card checklist.

Brotherly love; I dig it.  I first discovered this one upon purchase of a complete '99 Tradition set last year. Spoiler: This might not be the last Giambi you see in this post.

Lest you think I love 2003 Ultra, let me set the record straight: I do not.  It's pretty far down on the Best Ultra Designs of All-Time countdown.  Nonetheless, some pretty neat cards live within the checklist.  Javy's skunky looking hair is on the fence for HH inclusion.

And here's your extra Giambi, as promised.  Like '03 Ultra, 2005 Upper Deck isn't among my favorite sets.  But, every dog has his day.

Upper Deck's 2002 flagship offering wasn't exactly a thing of beauty either.  Though, I'll take it ahead of '05. Anyhow, it's nice to sneak an old favorite like Melvin Mora into this project.

However ugly you might think '03 Ultra is, you can't deny the allure of this amazing card.  When I first saw a scan of it online, it appeared that Mookie's step-son was raising his arms in exultation of a home run or a walk-off hit.  However, closer inspection reveals the baseball passing just underneath Wilson's chin.  Absolutely a keeper for the frankenset.

I love unconventional camera angles such as this.  Tomko's 2005 Upper Deck base card makes the cut for the time being.

I liked this card a lot more when I first saw it a couple weeks ago.  Maybe I'm just growing sour over the over-stuffed bat boy in the background.  A decent card, but certainly no lock for the set.

It's Pacific.  It's Tripp Cromer.  And it's a dusty double play at old Busch Stadium.  Any questions?

Just Commons?  More like Just Chillin'!  One of the most colorful pitchers of his era, Carlos Perez cards will always have a home in my collection.

Another from '96 Pacific.  The Pacific brand had some really great designs and some that were probably ill-advised.  This one falls towards the more favorable end of the spectrum.  Tony Phillips, and ex-Met, has a place in the set for now.

Ya-hoooooooooo!  No doubt, I had to grab this one, as it satisfied my sweet tooth for horizontal format plus background advertising.  I like this one a lot.

Okay, so I promise I'll have another completed frankenset page posted soon.  Maybe during this upcoming week even.  I'll have plenty of time since, y'know, none of my local retail joints are in a hurry to stock 2015 Heritage (the bastards!).