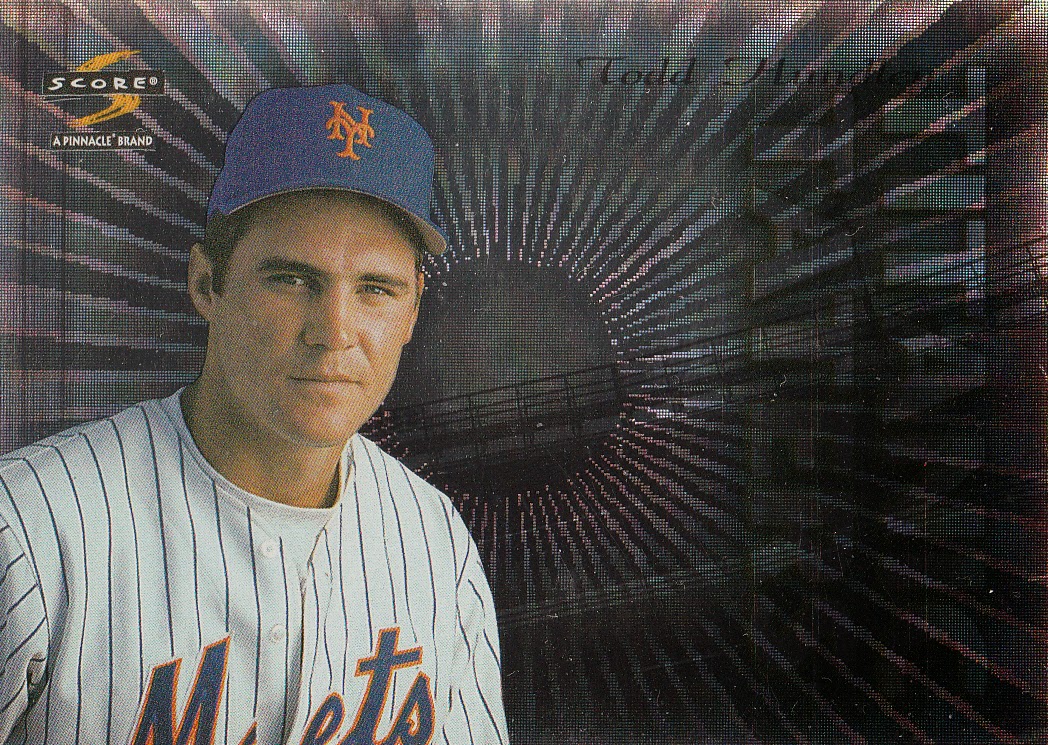 Another Zistle trade!  My third in the past month, give or take. And, another success.  This time, it was fellow Zistler reyoung68 who reached out to me regarding a swap.  He had lots of good stuff on his trade list, but I settled on nine cards that touched both my Mets and Horizontal Heroes needs.  Oh, and a guilty pleasure...but more on that later.

The "Titanic Taters" insert set from Score '97 is one that was unknown to me previously.  But, lo and behold, it exists! And, not only that, but it contains a Met in the form of Todd Hundley, who mashed his share of taters for the Mets in the mid-to-late '90s.  As you can see above, lots of foil-y and silvery goodness. 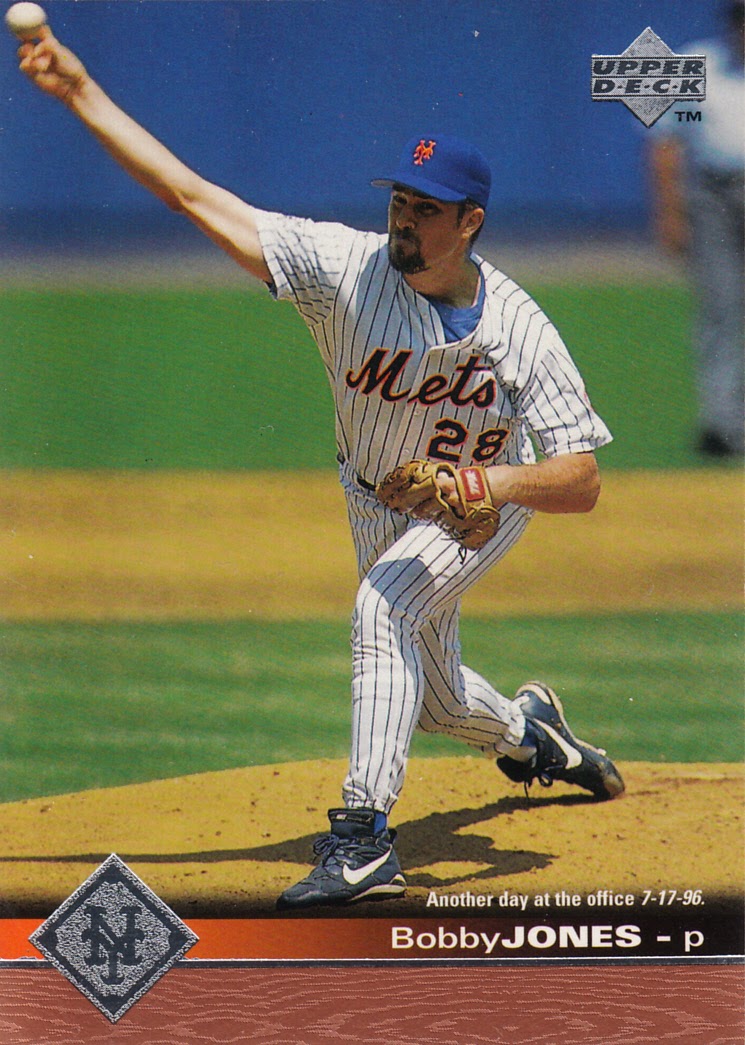 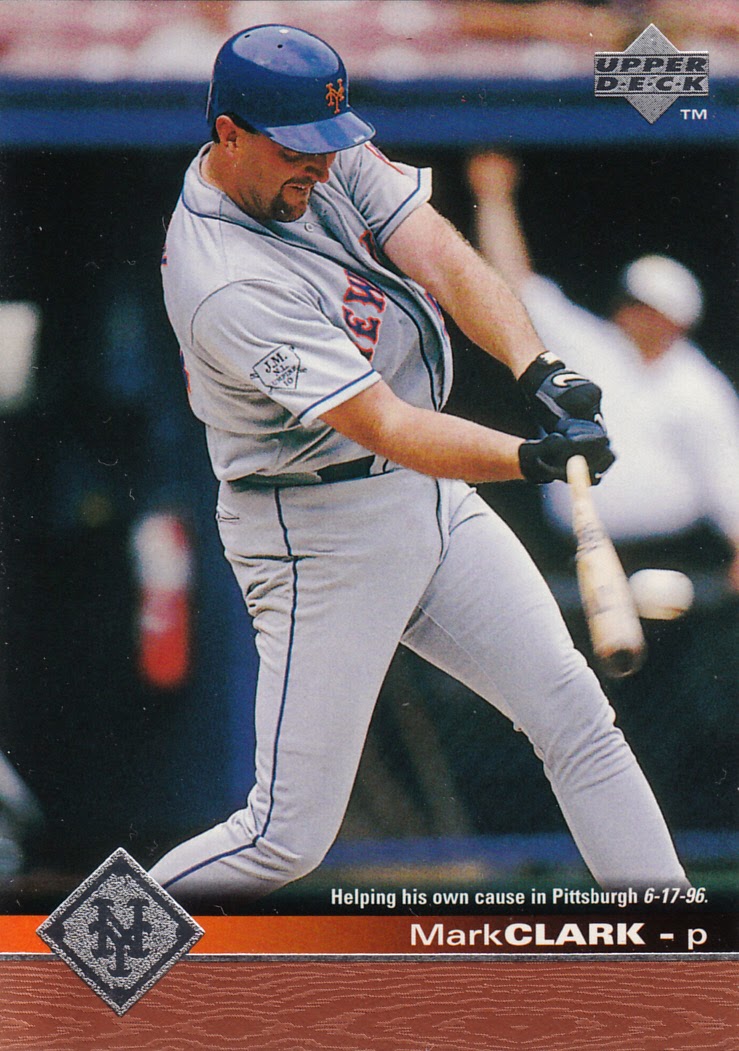 There are a few Mets pitchers whose batting prowess comes to mind readily when recalling their careers, including guys like Doc Gooden and Mike Hampton.  I don't think Mark Clark is on that short list, but this is a neat card nonetheless. 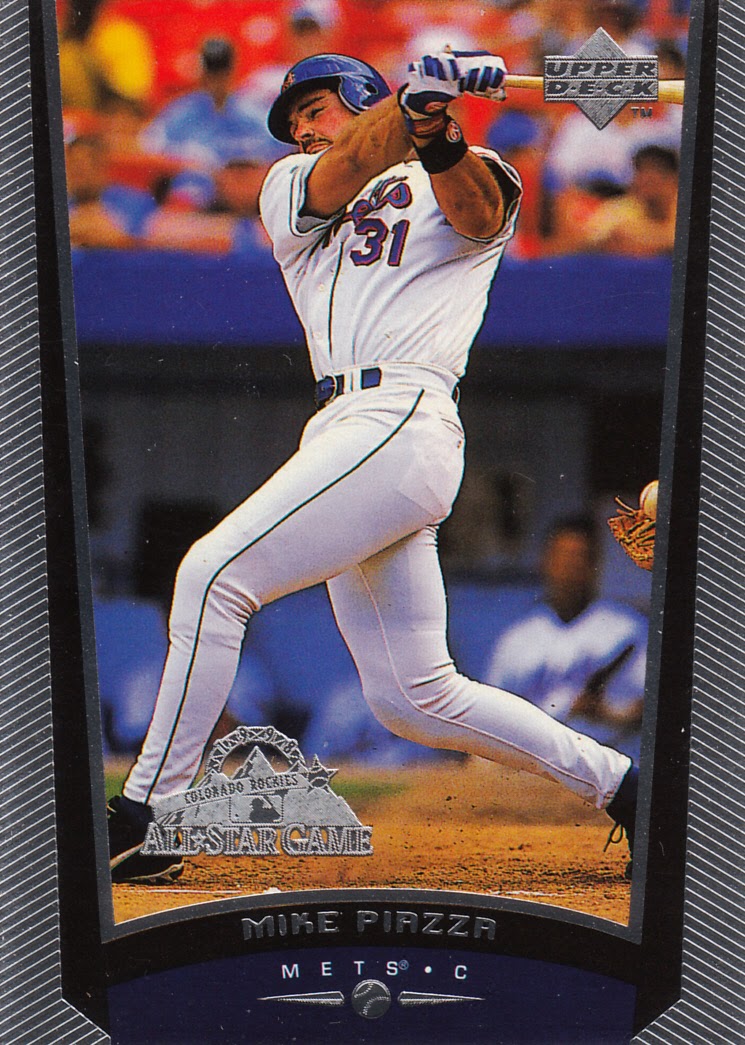 I think 1999 was one of Upper Deck's true boo-boos of the decade of the '90s.  It's just not a nice looking design in any way.  However, this is a great photograph of big Mike, framed quite nicely.  The foil embossed ASG logo is a nice touch, also. 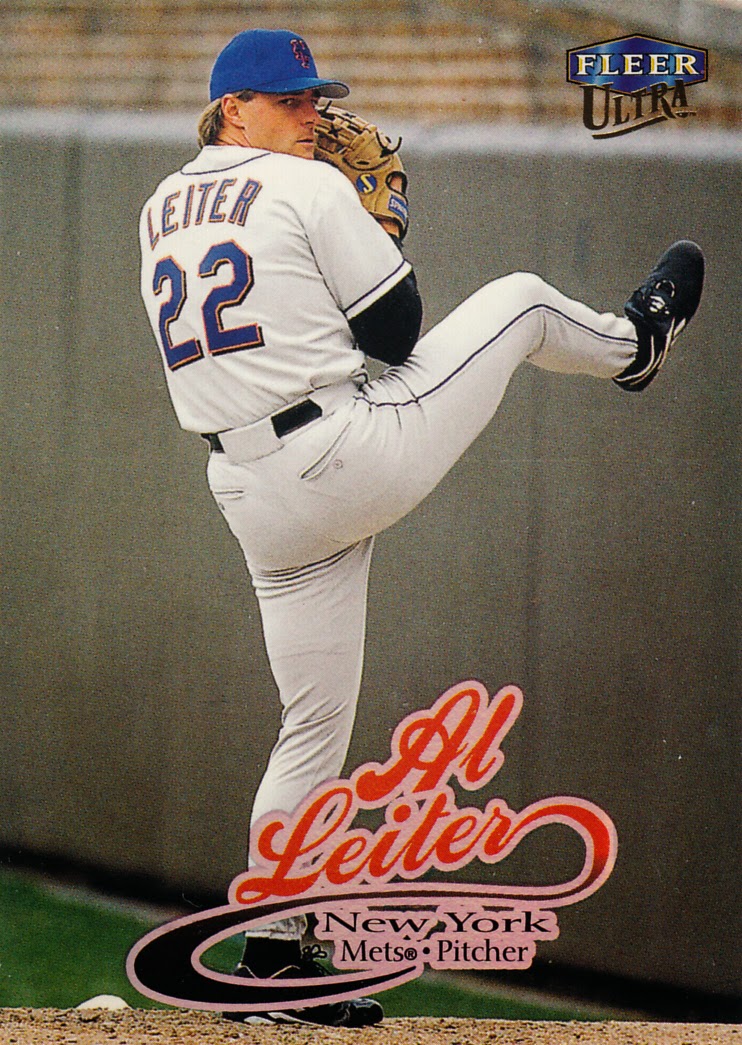 In many of Leiter's Mets-era cards, Fleer Ultra did an awesome job of capturing varying aspects of the New Jersey southpaw's distinctive windup.  I really like this one.  Looks like Al is warming up at Wrigley. 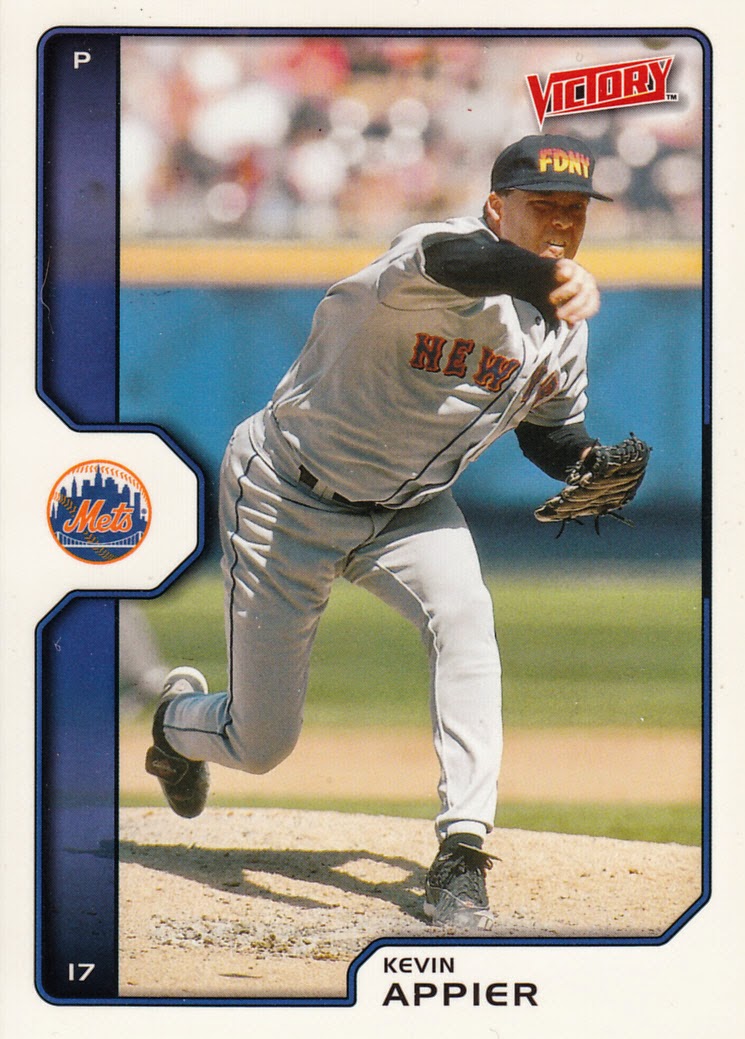 I love to find cards featuring a Met wearing a cap honoring the brave men and women of the New York City Fire Department, Police Department, OEM or Port Authority Police.  The Mets wore these caps in every game (I believe) following the WTC tragedy in 2001.  So, there are a number of cards from the various 2002 sets in which these caps pop up.

And now onto a couple of A-1 editions for the frankenset.  And each contains what you might consider a "web gem"... 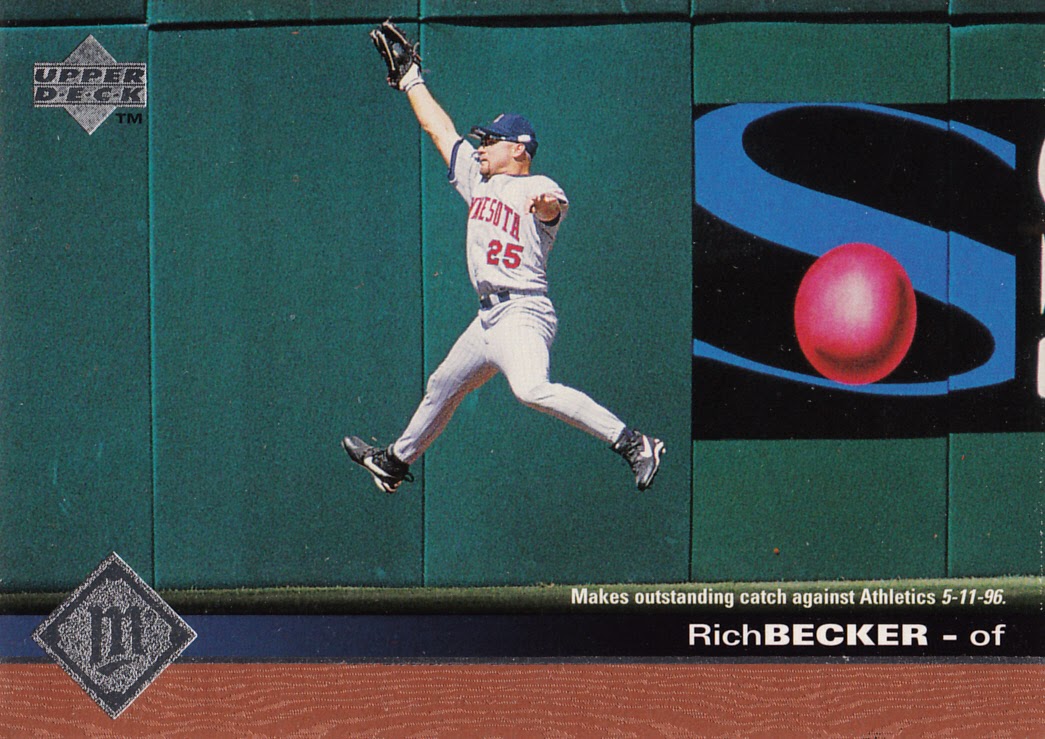 This one I had to, had to, HAD TO get my mitts on.  Becker, who also happened to play a brief spell for the Mets, is pictured making a leaping, Jordan-esque snag in the gap.  Looks like Oakland's ballpark, maybe.  [Ed. Note: Uh, yeah, Kaz, a little reading comprehension and common sense would do ya good!] And, of course, you've got the old SportsChannel logo on the outfield wall.  This one grades a 10 out of 10 on the scale of amazing cardboard! 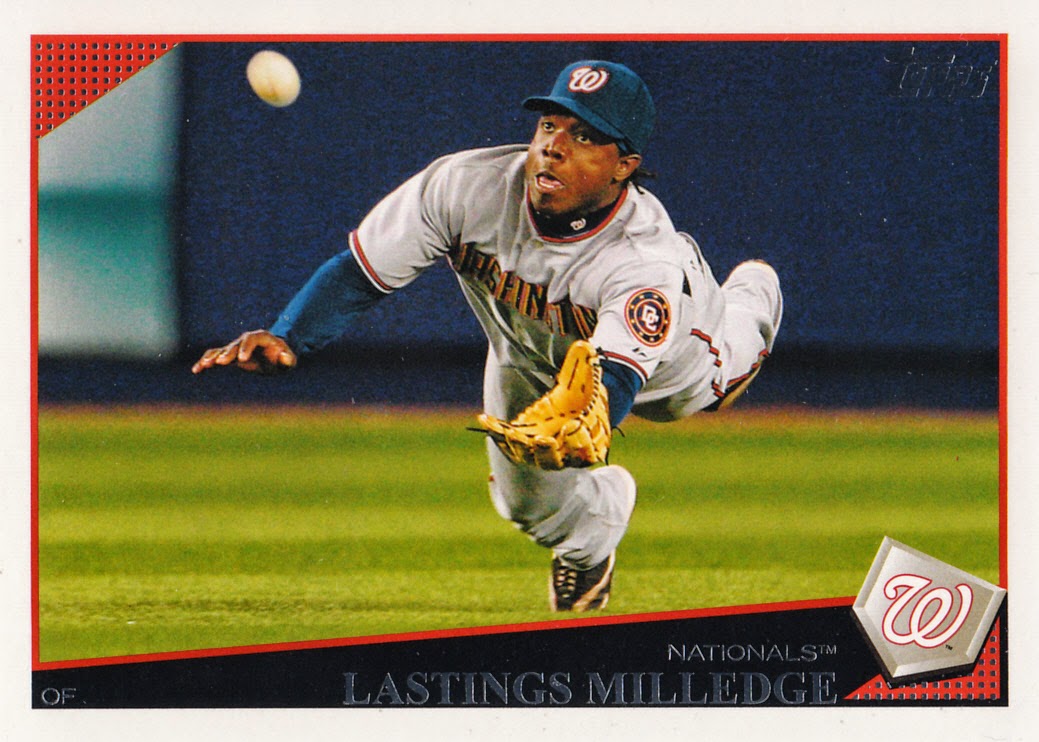 Another former Met, Lastings Milledge, goes full extension for a dying liner or blooper.  2009 Topps has some pretty terrific action shots sprinkled throughout its base set.  This was a no-brainer for the frankenset, and an easy way to get Milledge into the mix.

Finally, a card that I guess I oughta apologize for. 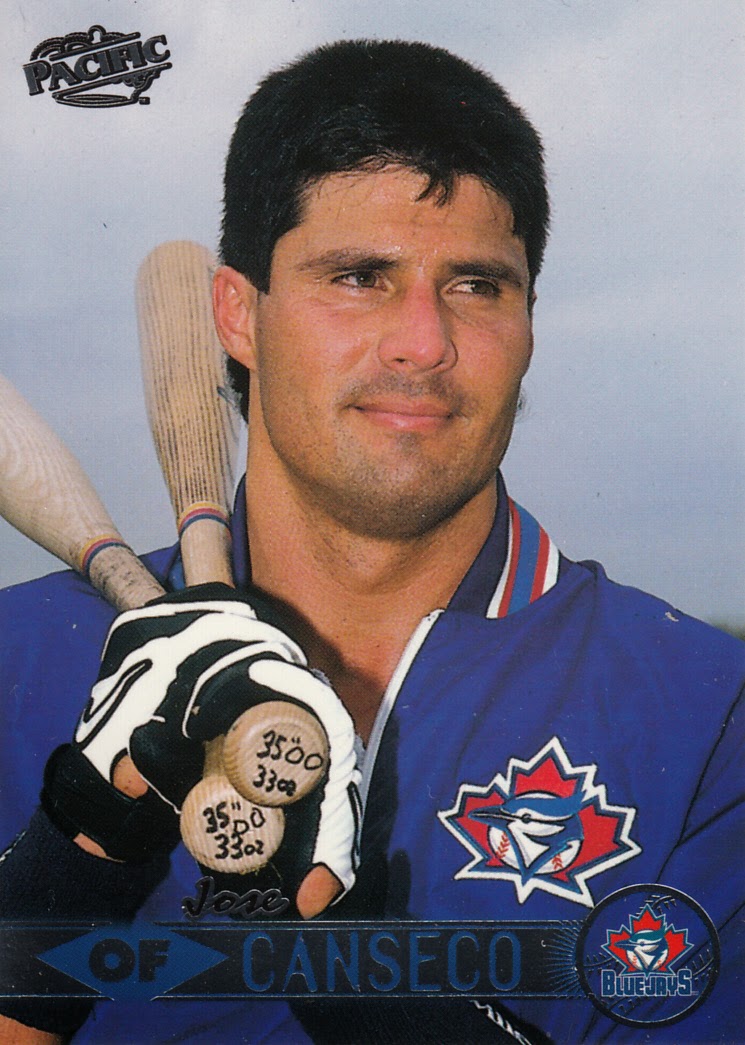 I suppose I kinda, sorta collect Jose Canseco.  I especially like the cards from later in his career when he journeyed between places like Toronto, Boston, New York and Tampa.  I saw this one on the trade list and was taken by it immediately.  It's a classic shot of the famed baseball villain.  Multiple bats resting over his shoulder. Big, bold Jays logo displayed on the warmup jacket.  And a smirk that could relay a thousand words.

Aw heck, on second thought, I make no apologies for this one.  This is a great card!

And there you have it.  Zistle trade No. 3 in the books.  These things are fun; I gotta try to rustle up a few more soon!