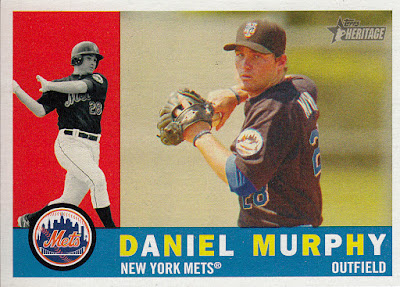 It fills my heart with great joy to type the following collection of words:

The New York Mets are the 2015 National League Champions!!!

By now, you know that Daniel Murphy has ceased his existence as a mere mortal and has requested his mail be forwarded to the Mount Olympus of Baseball.  Seven postseason home runs in nine games, including a blast in six consecutive contests -- a video game-esque streak that places him at a level for which you'd normally require a cheat code

Thus, it was a slam dunk that the humble line-drive hitter was selected as the Most Valuable Player of the recently completed NLCS.

So, here's a parade of Murph cards, one for each long ball that the New York second baseman sent into the darkness of various October nights...

Wow, what a streak!  At least it would kinda make sense if someone like Barry Bonds or McGwire or Sosa were at the steering wheel of such a ride.  But, this is bonkers.

It further makes this whole postseason seem like some wonderful dream.  The Mets are going to the World Series for the first time since 2000 and are getting offensive heroics from Murphy and mound dominance from a stable of young, imposing arms.

Hell, if Murph homers in Game One of the Series, I'm quite confident I'll wake up and it'll really be June 23 and Eric Campbell will playing third and batting cleanup against Milwaukee.

So, please do me a favor: Don't pinch me!