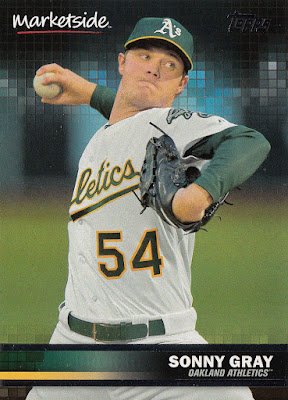 On Twitter earlier today I learned that Sonny Gray would be scratched from his Opening Day start for Oakland due to illness caused by...food poisoning.

The perfect lead-in to this post about Walmart's Marketside cross-promotion with Topps!

Well, that's not really fair then, is it?  I actually quite enjoy the food offerings at Walmart's deli these days.  In fact, I've used their catering for several family functions over the past year or two.  It's both cost effective and quite delicious.  I've had countless family and friends compliment the food before they knew where I got it from. They were both shocked and impressed.  I'd implore any of you to give 'em a try if you're on a budget and would like to provide food for a small-to-medium group.  I think you might be pleasantly surprised!

Anyhow, I'm not here to do a commercial (though I guess I already did).  Rather, I finally got a chance to roll the dice with a Marketside product that included a pack of special Topps cards.  Instead of buying a pizza, though, we went with the cheesy breadsticks, which also included the cards.  At the cost of just $3.88, it was cheaper way to see what all the fuss is about.

My pack included the recently bathroom-ridden Vanderbilt product you see in the lead-off spot of the post. 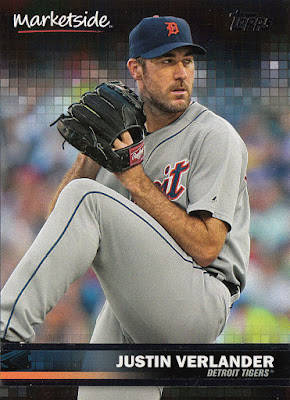 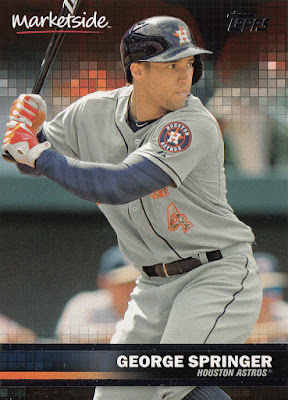 Of course, on eBay the singles are going for a few bucks a pop.  I'd rather keep trying my luck at 3.88 and get some cheesy breadsticks to boot.

I, for one, welcome this new wave of food-issue cards, and I hope it's not a one-time thing.  Who knows, maybe it'll hook a few new youngsters into our beloved hobby.

One thing I will take umbrage with is the promotional claim on the front of the box that the baseball card contents are a $7.50 value.  Kind of far-fetched.  Though, the pack did contain a promo card that had $3.50 worth of coupons for Topps cards.  Plus some Topps Bunt thingie that went into the recycle bin as swiftly as I opened the pack.  Does it all add up to a half-dollar shy of eight bucks?  Probably not, but value is in the eye (or wallet) of the beholder, right?

So, anyone landed any Marketside Mets that they'd care to swap??