Cards Which Are Not Baseball 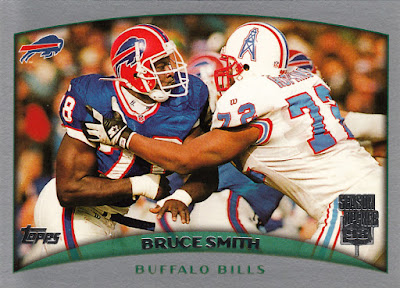 Since I picked most of the meat (aka Mets cards) off the bone (dime boxes) from my favorite vendor at the local monthly card show. I decided to branch out to other sports.  Namely football and basketball.  While Mets collecting is still my numero uno passion, I do also enjoy picking up cards for my other favorite sports teams plus anything else that might catch my fancy.

Newer football cards are all right, but they don't intereste and/or excite me the way cards from the '90s and early '00s do.  And since I wasn't doing much -- if any -- collecting during that time, I have lots of catching up to do. 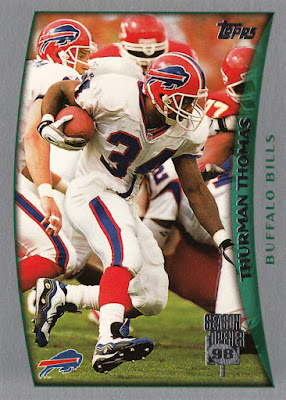 Anyhow, for a dime apiece, I was able to grab cards of my football heroes of yesterday. 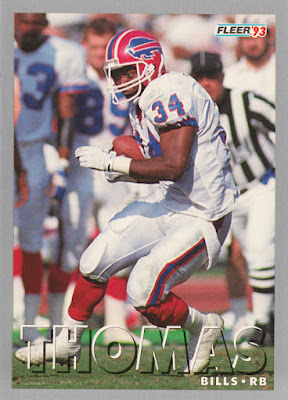 One of my favorites to collect is Thurman Thomas, since he was my favorite player as a kid and he's still my favorite all-time player. 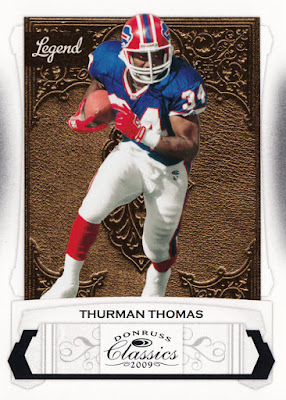 This Donruss Classics card is numbered to /999.

One of these days I'll get around to entering all my Thurmans into my Zistle library.

For Christmas in 1992, I got the complete Topps football set for that year.   I was psyched to receive it, but also a bit disappointed.  Y'see, missing from that set were some of the Bills' biggest stars, such as Kelly, Reed and Smith.  They were only available in the High Number set which was sold separately. 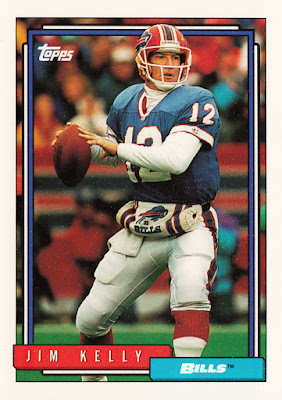 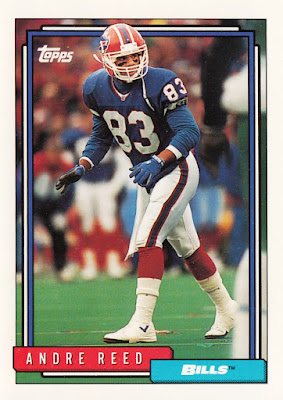 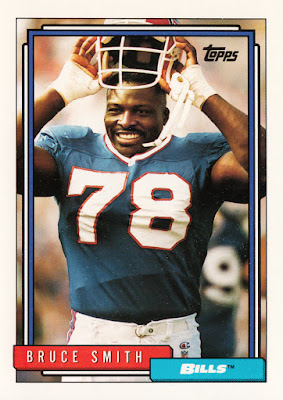 Well, I was more than a tad bit thrilled to find these three in one the monster boxes!  Finally, a nearly 24-year-old itch was scratched. 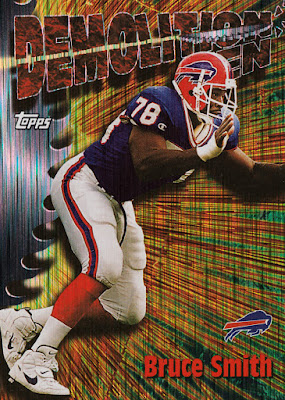 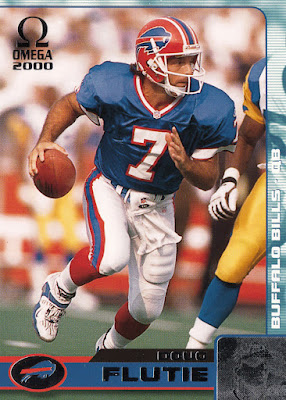 I loved the Doug Flutie years of Bills football.  I just wish they would have lasted a little longer! 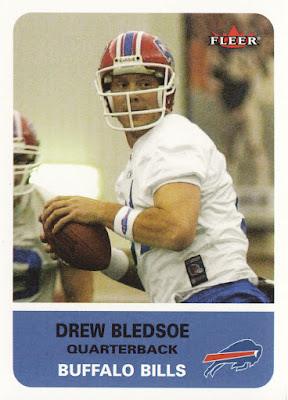 I was extremely excited when Drew Bledsoe signed with Buffalo, and that first season was some of the most exciting offensive football in Bills history.  Sadly, the defense and coaching were substandard and league quickly caught up to the Kevin Gilbride's offense.  Still, I'm a Bledsoe fan to this day. 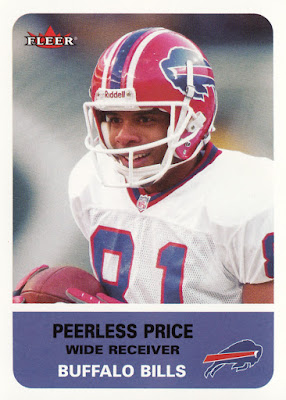 Peerless Price, a name for the ages.  His mom named him after a word she saw on the side of a moving company's truck.  Honestly.  She thought it sounded good and the rest is history. 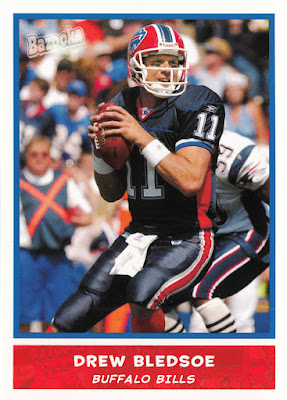 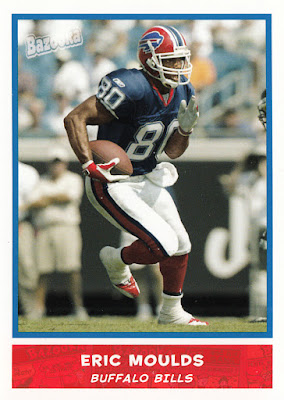 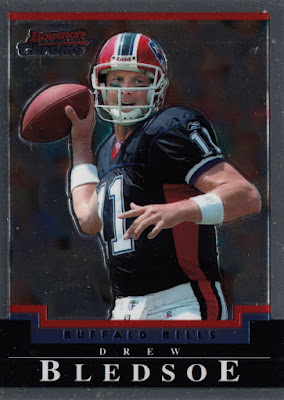 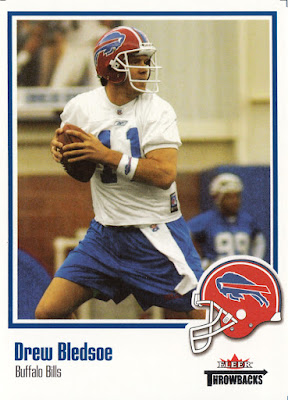 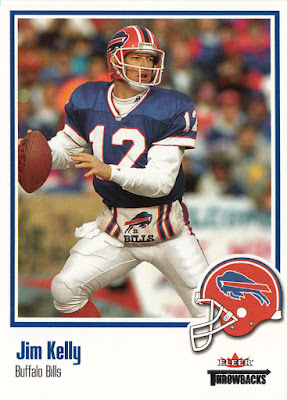 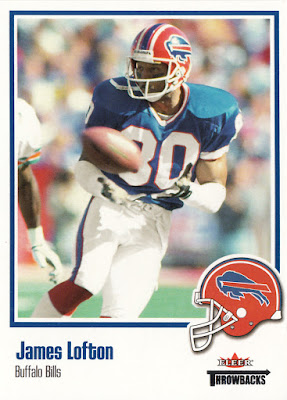 Along with the Bills cards, I found a few interesting football cards that I couldn't pass up for a dime.  I'm not much of a football collector anymore, so these will likely sit inside a box and never see the sunlight.  That is, until I am done (re)organizing my baseball collection and have the time to properly devote to the other sports.  In other words, I'll probably be dust before that happens. 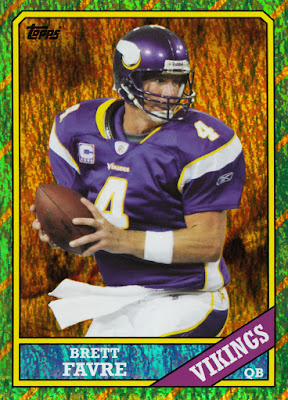 I don't think I have any other Favre-as-a-Viking cards, so I thought this would be a good initial entry.  It's a gold parallel from the Archives set a few years back. 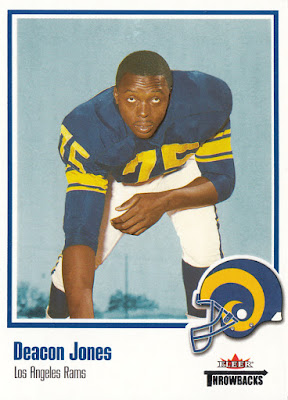 I love me some Deacon Jones!  He was a bad man, jack.  A fierce competitor with an ego only bested by his talent.  This is a guy who I'd want on by my side if I had to walk down a dark alley or spend a night in a haunted house. 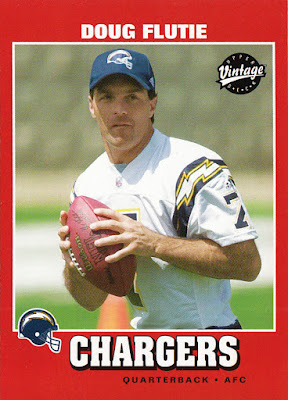 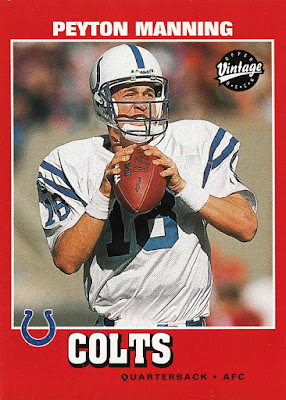 Yeah, Peyton Manning, why not?  I'm a sucker for the faux-vintage retro cards and Manning just looked right on this one.

How about a few quick basketball cards before we say goodbye? 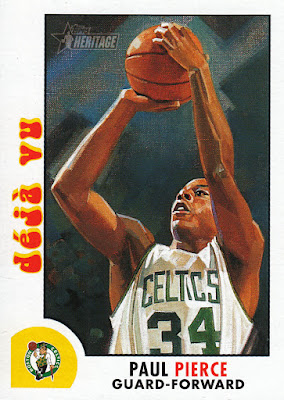 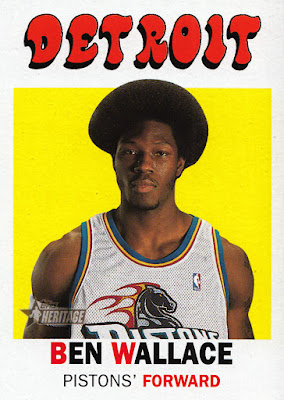 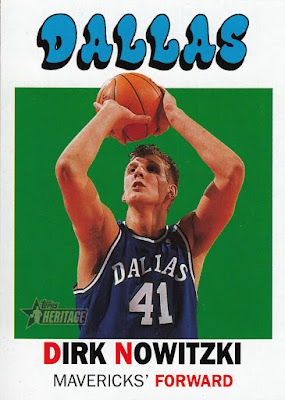 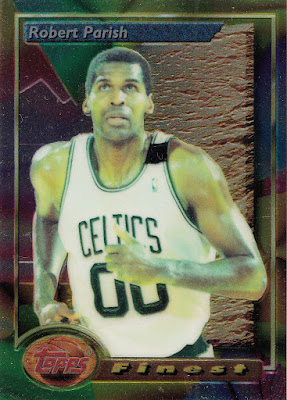 Ditto for Finest basketball.  Hail to the Chief! 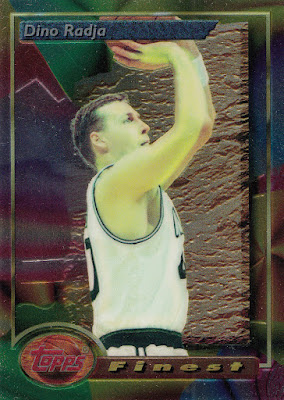 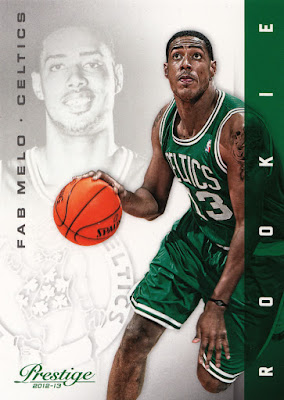 No, you probably don't remember or know Fab Melo unless you're a hardcore fan of the Celtics or Syracuse hoops.  Such a great name that I had to have it, plus I'm a Celtics fan so I wanted one of these in my collection.

Thanks for taking a brief non-baseball detour with me.  We shall return to the national pastime during our next transmission...