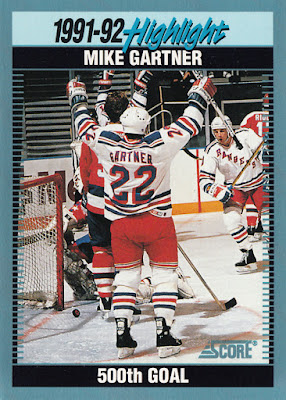 Back before Topps Now granted collectors instant gratification, we collectors needed to wait for update/highlights sets or -- God forbid -- the following year's release for "Season Highlight" cards.  I don't recall suffering too badly in those dark days of hobby past, but I still think Topps Now is a pretty neat concept and I'm glad it's around.

Anyhow, the Mike Gartner card in today's lead-off spot comes courtesy of the repack champion of the North, aka Douglas of  Dollar Store Cards.  He featured this dandy Season Highlight issue on his blog not too long ago, and I was the lucky recipient of that copy plus copious amounts of additional cardboard earlier this month.

This Gartner 'highlights' card speaks to me since I vividly remember the goal, plus Gartner was my favorite player as a young lad.  By the way, Wikipedia informs me that Gartner became the first player in NHL history to record his 500th goal, 500th assist and 1,000th point in the same season, so that's pretty noteworthy.

As usual, Douglas' delivery included a nice assortment of cards towards my embryonic hockey collection which focuses exclusively on the Broadway Blueshirts. 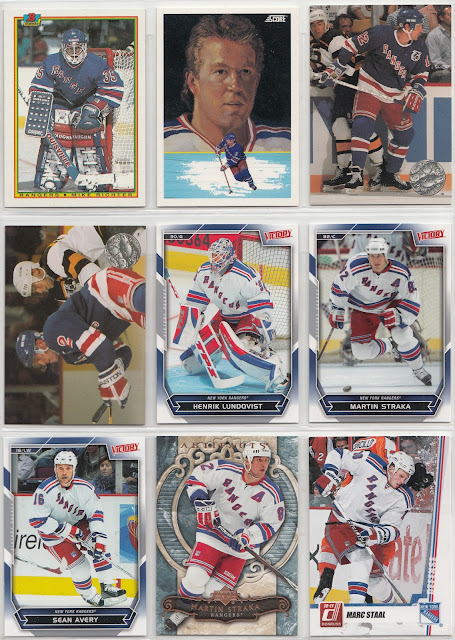 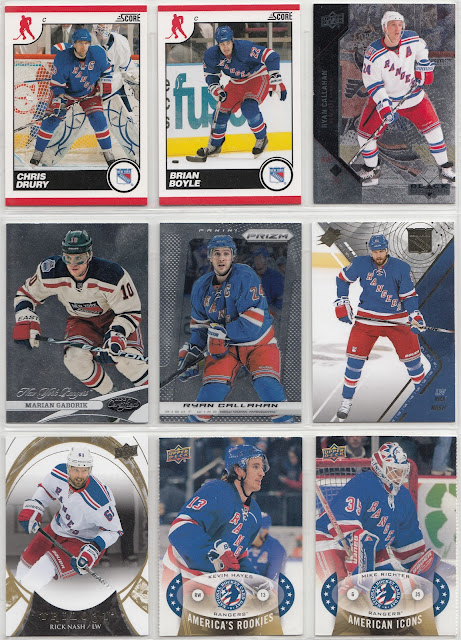 Those two Hayes and Richter cards on the bottom third of the latter page are pretty cool because they're perforated from a sheet which -- I believe -- was part of a hobby store promotion. 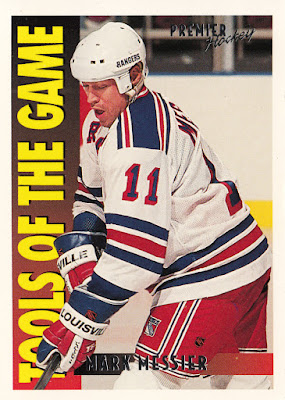 A new Messier card is always worthy of highlight. 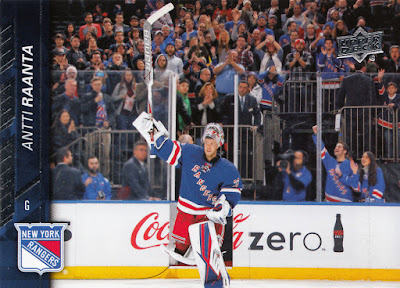 And, we'll wrap up the hockey segment of the post with my first card of backup netminder Antti Raanta -- and maybe the most awesome photo in my hockey collection.  So much to enjoy! 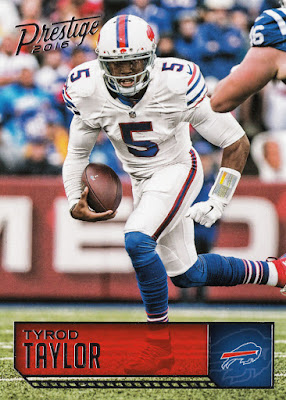 I got my first look at Prestige 2015 thanks to Douglas' blog a couple months back and, lo and behold, I am the grateful recipient of his extra Bills from a group break in which he participated.

I think Panini did a tremendous job with this product, from the design elements to the photo choices.  Zero clutter, classy design and bold photos make this one of the best football sets I've seen over the past few years. If I still was a hardcore football collector, this would be a set I'd make an effort to complete. 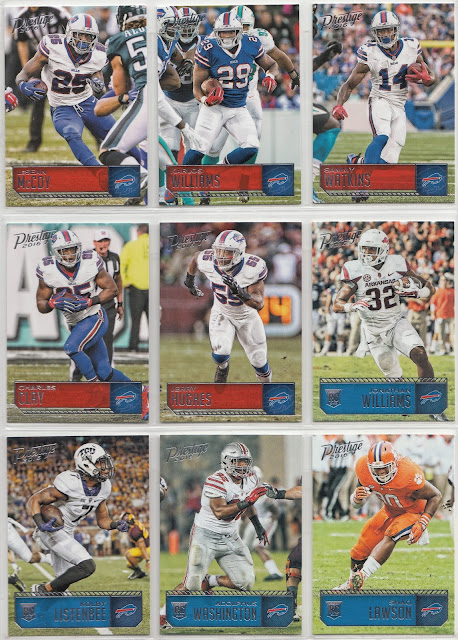 It's so refreshing to see rookie or draft pick cards of guys in their college colors instead of badly photoshopped NFL unis.  Or in workout gear while they're running the 40-yard dash at the Combine. 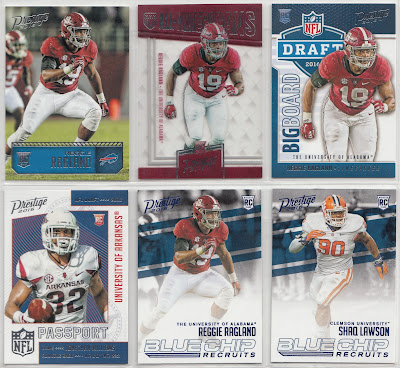 Loads of draft pick cards in the checklist, including former Tiger Shaq Lawson who unfortunately will miss most -- if not all -- of the upcoming season. 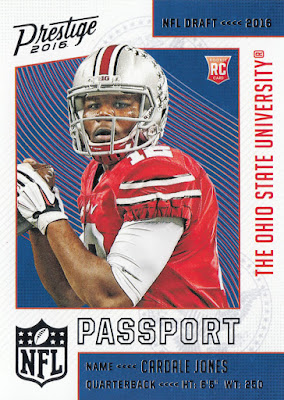 I've also got my first card of Cardale Jones.  The Bills haven't drafted a whole lotta QBs over the span of the last 30 years, so when they do you take notice.  Jones is an intriguing prospect; loaded with talent, strength and raw athleticism.  How his gifts will translate to the NFL is a mystery to me and everyone else. 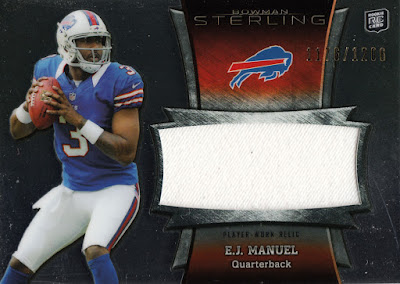 This handsome Bowman Sterling jersey card caps off the pigskin portion of the post.  I don't know what the future holds for former first-rounder E.J. Manuel.  I kind of feel bad for the guy since he was never intended to start from Day One, but start he did.  And with Tyrod Taylor now the unquestioned No. 1 in Buffalo, E.J. will play out his remaining days in Western NY as a backup.

We'll wrap up the proceedings with cards depicting America's pastime... 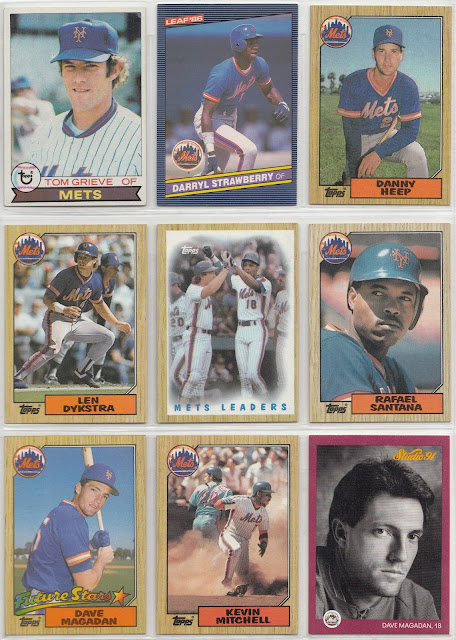 I never scoff at getting dupes of '80s cards because most of the time I'm in need of condition upgrades.  A few of those '87s fit that exact bill. 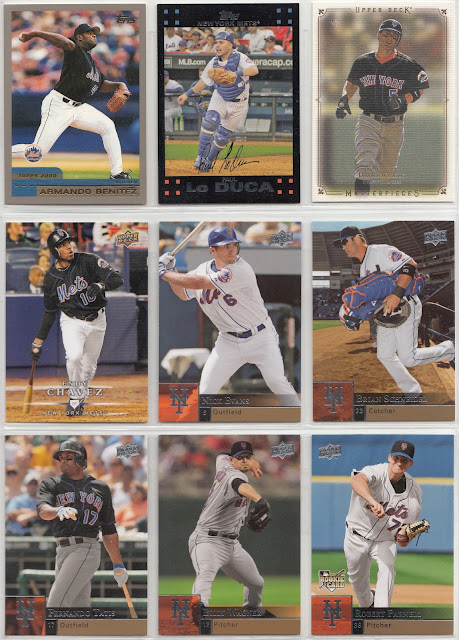 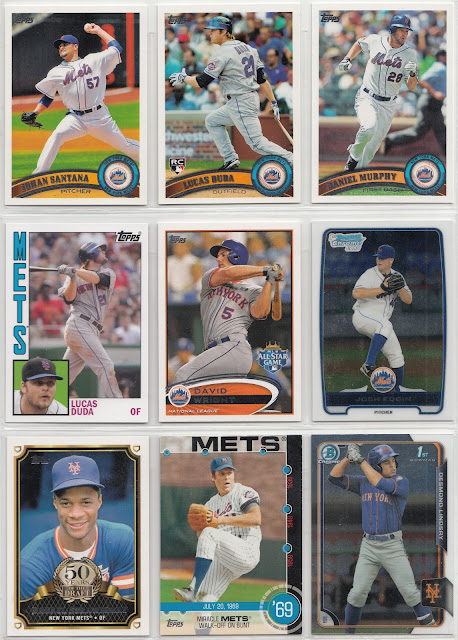 It feels good to finally take that damn Lucas Duda Archives off my 'want' list.  It seems like it's one of those cards I should have six copies of, yet it managed to elude me for four years. 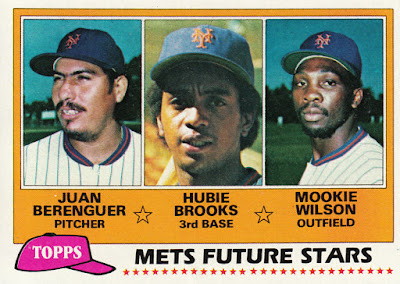 One of my favorite rookie cards in Mets annals right here.  Mookie is an all-time Mets legend; Hubie was a solid Met and a fan favorite for a time; and Berenguer carved out a decent 15-year career for himself -- mostly with other clubs than the Mets.

Many thanks for another fun assortment of cards, Douglas!